Earlier we mentioned how the Aryan Guard, which claimed to have disbanded in the middle of the week, has decided to ride out the storm. In reality, the old guard of the racist gang have likely moved on and it's the younger, more violent, less intelligent (if that is at all possible) members have taken over. What is most interesting is that at least some Aryan Guard members appear to be in contact with Kyle McKee, currently being sought on attempted murder charges. On his Facebook page, it looks like McKee has provided access information to an ally and is in communication with that person:

When it comes to the decision not to disband the Aryan Guard, Bill Noble has decided to address some questions, including suggestions that he take over leadership of the gang: 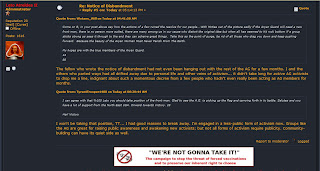 Noble is trying to sound conciliatory, however there is a great deal of animosity in the ranks of the former Aryan Guard. One young member and Marleau discuss the issue briefly on Facebook:

One of the people he's talking about, at least in part, is Noble: 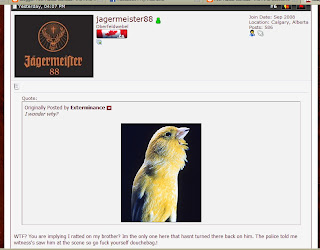 However, that doesn't stop others from calling Marleau out, as evidenced by his further need to respond to accusations: 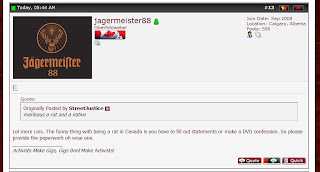 Marleau also addresses the issue of the "White Pride" march that he claims is still being planned and the issue of who is real and loyal:

But, just so our readers don't think that this is a squabble occurring only within the ranks of the broken Aryan Guard, we would point to the fact W.E.B. has decided to weigh in. Tyler Sturrup (one of the targets of the pipe bomb attack), using Robert Reitmeier's Stormfront account, posted the following statement:

We especially enjoy his statement that, "W.E.B word is law" considering the intellectual abilities 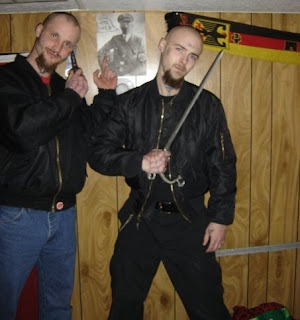 of the W.E.B. brain trust. Case in point, Sturrup (pictured along with Reitmeier) spent months in jail, missing the March 21, 2009 White Pride fiasco. Why was he in jail? Because he stole a lobster from a Chinese grocer then pulled a box cutter on the person who stopped him. And why did he try to steal a lobster? He had stolen another earlier in the day and wanted to watch the two fight in his bath tub.

And if anyone thinks that the members of W.E.B. will be able to organize getting out of bed on time, never mind a march through the streets of Calgary, the former Aryan Guard don't have a hell of a lot of faith in them either to do something "useful" like "bomb a synagogue of muslim temple [sic]": 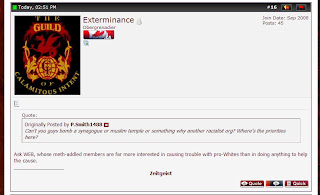 To which a nervous Marleau replies: 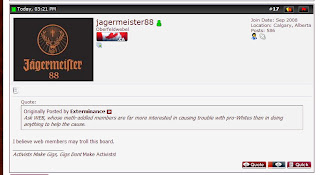 We're sure they do, but so do we, so we'll share your concerns with the our readership.

In all honesty, there is reason to be concerned. Back biting within the remnants of the Aryan Guard with the new "leadership" taking a decidedly violent and threatening tone, all the while in a conflict with the equally violent W.E.B. gang. Both groups claim they will take their, "activism" to the streets and off the Internet. Both groups have people who have been charged with and/or convicted of numerous crimes, including assault and attempted murder. Both groups have stated they will begin targeting minorities in the city of Calgary.

The police need to step up and deal with these people before someone is seriously injured or killed. McKee was building pipe bombs and amassing a supply of weapons. There's no reason to doubt that others in both gangs have done the same. And while their violence might take the form of targeting one another, we do fear for any innocents caught in the cross fire.

We had been warning people about the Aryan Guard (and the splinter gang, W.E.B. soon after we became aware of it) for years. We were right about them. Now, we're warning that the danger has not decreased and, in fact, may very well escalate.

So marleau decides he's not a rat and all these idiots believe him? wtf

they really are fucking stupid, no one walks way from that esp when it was his "ex" who was the target
even if they are nazis you cannot possibly say they are THAT stupid!!!

Don't overestimate them. They can be that stupid.

I think both groups are going to end soon, but I'm pretty sure you are right about a new wave of violence sadly.

I think some of the photos demonstrating their ideal living conditions clearly demonstrate nos200's point.

How do the WEB members keep living (outside of jail time) if they obviously don't have jobs. Can anyone answer this? do they rob people or something?

Work-shy louts with a contrarian attitude and fuck-all to lose can skip the odd Wendy's burger once in a while and invest in the occasional can of spray paint, it seems.

But it's members of the true vanguard of the Canadian Master Race who can also forgo a couple of 12-packs and assemble the materials needed for a real live pipe bomb.

I enjoy beer, so I can appreciate the personal sacrifice.

I doubt your average prosecutor or judge will be nearly as impressed, however.

A little old now, but I think Bonnie sums it up well.