Sometimes, one enjoys a good laugh.

I started ARC almost 10 years ago and have been involved in some sort of anti-racist work and activism for about two decades so by this point there's not a hell of a lot that surprises me. So I guess I owe some kudos to Ryan Dean, because his profound lack of self-awareness and a delusional sense of accomplishment that makes even the Goudreau appear reflective and lucid by comparison is somewhat novel.

ARC readers will remember the article posted on September 2 in which I briefly discussed Ryan Dean's much ballyhooed "Operation Boom." Dean, in concert with the leadership of the WCAI, resurrected the "Guardians of Alberta" name and claimed to be holding an anti-Muslim rally at Calgary City Hall. A number of individuals and groups showed up to oppose the group. The police arrived for form a barrier between the protesters and anti-protesters. However in the end, there were no anti-Muslim protesters who showed up. Instead, Dean began bragging about how he embarrassed the counter protesters for.... reasons I guess? I'm still not entirely clear, though the fact that no anti-Muslim protesters showed up costing the city $50,000 proved definitively that "patriots" in fact "owned the streets."

I think that's what he meant? Or maybe since he wrote "who's street" he thinks that there's someone names Patriot Streets that people should be looking for in the city: 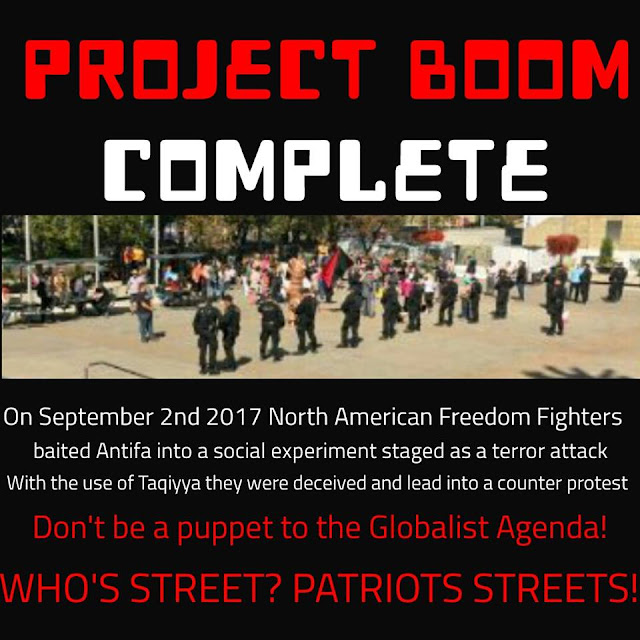 And how exactly is a counter-protest featuring the Raging Grannies, "a social experiment staged as a terror attack?"

Yeah, I still don't really get it.

But don't think for a moment that Ryan will be swayed by common sense. Oh no. In fact if one does not see the brilliance of his efforts, then this only proves the weakness of the counter protesters and ARC.

No, really. He actually believes this:


So much to unpack here.

Let's leave aside for now the claim that my commenting on how they didn't show up to a rally they organized makes ARC look weak because that sort of defies any sort of common sense. Instead I'll start with his claim that:


freedom of speech is supposed to be delivered with[out?] hinderence [sic] or restraint


Antifa is a hinderance [sic] and if police wont stop counter protesting....

Dean like many like-minded bigots is confusing "free speech" with "consequence free speech." He seems to believe that he has the right to say whatever he wants and that no one should be permitted to publicly oppose him or argue that he is incorrect. But ARC readers are well aware that part of free speech (or expression) means that those who disagree with you have every right to loudly and vigorously disagree with you in public at a.... I don't know.... a counter rally of some sort comes to mind as a possible example. And that by denying those individuals the right to disagree is a violation of the "free speech" rights Dean claims for himself and his cause.

But then ARC readers also know that people like Dean don't really actually care about freedom of speech other than using it as a justification for rhetoric.


If the left would let others express their freedoms then a police presence would not be necessary.

In fact, whether it is an anti-Muslim rally, the Calgary Stampede, the grand opening of a public art piece, or a multicultural festival, there will be a police presence so whether or not "the left" show up would sort of be irrelevant.

But wait a moment. Are you arguing that you need a "safe place" for you and your associates to congregate without having to be concerned about people who might say mean things about you? I never realized that the North American Freedom Fighters were such snowflakes. ;)

In the same exchange with the person who sent ARC the screen grabs, Dean also sent what he refered to as a "press release" though there's no indication that the release was actually sent to any media outlets, another example of how Dean doesn't appear to understand the meaning of words: 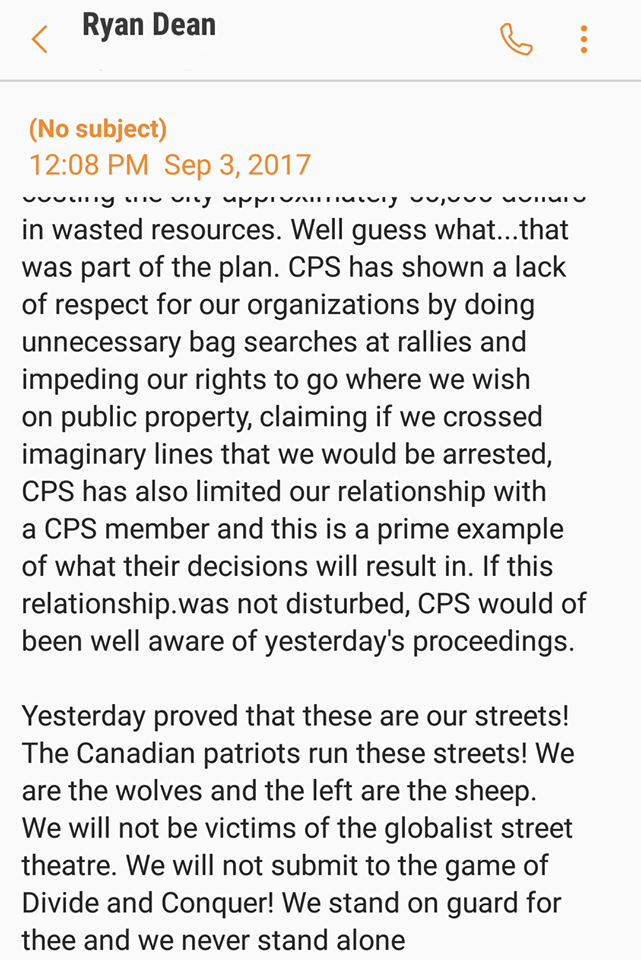 Admitting your intent was to waste the police's time and cost the city money?

Dude, I know you won't take my word for it, but you really, truly, aren't helping yourself. Neither is doubling down of making a fool out of yourself on your Facebook page:

Honestly though, it would be sad if it were not this funny.

Dean continued to be genuinely proud of himself and quite smug as he continues to brag about his #winning in both comic sans and confusing videos: 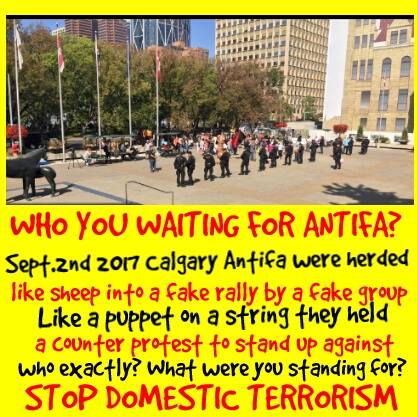 Yes, that is Rage Against the Machine.

And no, Dean, who rails against "the left," "Antifa," and "commies" truly doesn't understand why that is ironic.