Call it spring cleaning. In the fall. And it is going to be disjointed as hell.
We start with more of the infighting that is endemic amongst boneheads: 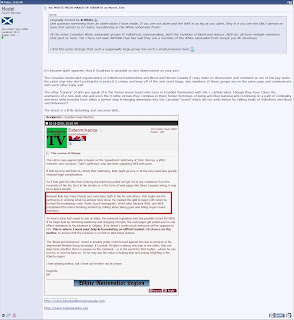 We had planned on using this Facebook post by Mr. Anderson when the boneheads in Edmonton were arrested last March when we identified the accused. Sadly, we never did get to it.

We had also planned on posting the following screen shots concerning the Wingrove article in the "Globe & Mail" but at the time decided posting yet another screen shot of Bill Noble crying persecution was getting a bit stale: 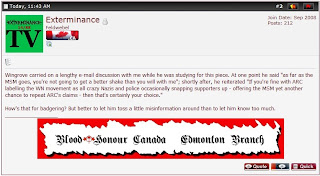 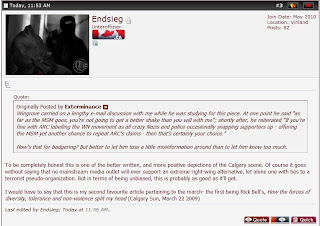 This also took place around the failed "White Pride" march of 2011. Not long after, "Max" who also attended the march posted a link concerning the failure. A who's who of past and present boneheads added their two cents:

Of significant interest was this part of the dialogue, likely referring back to the Wingrove article:

But according to Free Dominion, Marc was never a part of the Heritage Front. We are shocked!

Finally, back to Noble complaining about his failure as a man. Or the depiction of the march in the media. We often get the two things confused: 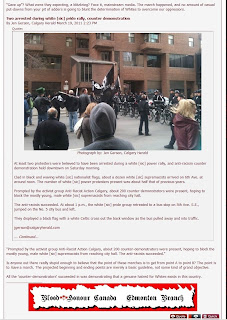 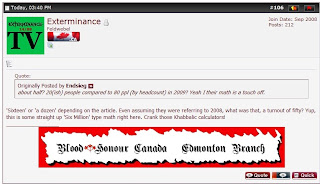 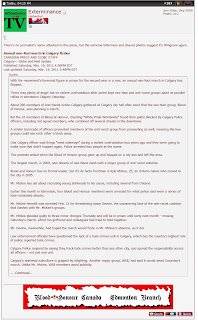 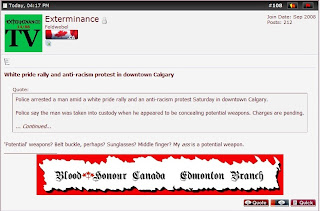 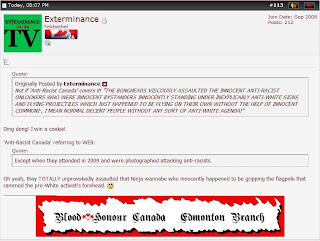 Yeah, this article sucks. Basically we had a bunch of old stuff collecting dust. Decided to dump it today.

Four years old already?! They grow up so fast!

Micki "Valkyrie" McDonnell is producing an "NS pin-up girl calendar" to raise profits to use towards local NS events & rallies.

That "can't believe my dog ate my bag of weed" comment just about made me pee my pants laughing.

Anyway, with your new photo-viewing layout it makes it so you can't zoom in on the pictures...there are a few of them where the print is too small to read. Maybe it's my lack of computer knowledge or something, but I just wanted to let you guys know.

Yeah, not sure why that is.

If you click and drag the picture to the address (URL) bar, you can see the full sized picture.

Anonymous 2: Uhm, will the pin-up calendar feature women who look like her? Because, well, we can't see it being a big seller if that was the case.

But I have to agree that this 'pin-up' project seems ill-conceived. Why pay for a calendar when bonehead boys can get Pictures of Sexy White Women Who Look Nothing Like the Ones in Our Movement on copious Stormfront threads, for free?

At least the latter allows them to keep the fantasy of Supreme Aryan Hotness alive.

Uhm yourself, Nosferatu200. They have to actually HAVE money to buy said calender in the first place; and well, since the majority of them sleep until the crack of 4pm and don't work, me thinks the proceeds of this pet project will be very minimal.