Finlayson also noted the irony in the case in that Decu has darker skin and was himself called a “wetback” by the other members of the white supremacist group.

Defence lawyer Nicole Sissons told court Decu is “easily influenced” and was “actively recruited” by the white supremacist group. She also said the restaurant cook is bipolar and suffers from some learning deficits.

“He was so desperate for friendship that he thought it was all right,” said Sissons, conceding the incident was “nasty” and Decu’s racist slurs were “mean.”

Sissons said Decu is of Spanish heritage and remarked on how odd it is for a non-white person to be with white supremacists. She also noted he had been drinking at the time, which he is not supposed to due to his medication.

Decu apologized in court for “all the wrong I did” and said he was sorry to the victims.

“I’m Spanish,” he said. “I just got mixed up with the wrong crowd.”

Decu, who received a suspended sentence, was also ordered to report monthly to a member of the Edmonton Police Service’s hate crime unit and must take counselling for anger management.

As well, he must refrain from boozing and is forbidden from associating with members of the international white supremacist group, Blood and Honour, or from handing out white supremacist literature or going to their rallies.

Court has heard Decu and three other men had been near the downtown Churchill LRT station on the evening of Feb. 12 handing out flyers about Blood and Honour.

The group then made their way to Whyte Avenue and went to the Strathcona Hotel bar to drink beer.

While there, the men began “singing Nazi songs,” yelling “Heil Hitler” and hassling anyone who was non-white or appearing to be either homosexual or lesbian. They also hurled racist abuse at a woman outside the bar, using the n-word and saying all black people should be dead.

The men eventually went down 103 Street towards the New City bar where they began verbally abusing a non-white man having a cigarette. The man was then punched several times, head-butted to the ground and kicked.

As the men left, they yelled out “white power” several times and went to a liquor store in the Commercial Hotel, where they were captured on video bragging about the assault and congratulating the attacker.

The thugs then went to the Funky Town lounge, where they again racially abused a woman they had verbally attacked earlier. A woman who told the group to leave was then punched in the face, as was a bouncer.

On Sept. 30, David Roger Goodman, 19, was sentenced to 15 months in jail, followed by 12 months of probation, after pleading guilty to two counts of criminal harassment, two counts of assault and causing a disturbance.

Also on Sept. 30, James Andrew Brooks, 26, was handed a 13-month jail term after pleading guilty to two counts of criminal harassment, assault with a weapon, assault and causing a disturbance.

Jason Anthony Anderson, 32, is still facing charges in relation to the hate-crime incident.

A little disappointing that he only received probation, but as we don't call 'em boneheads for nothing, there's a good chance he might screw up and end up in jail for an extended stay anyways. We only hope that he doesn't hurt anyone.

Three down, one to go.

You're next Mr. Anderson.

But we've teased long enough. We haven't written about Tommy Boy in a few months, though we've been watching from afar. However we can't take credit for catching this, so thank you to one of our readers for sending us the link: 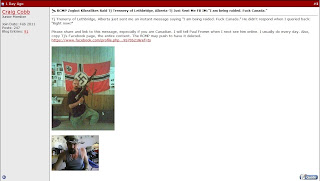 That's right boy's and girls. Clear thinking, rational, and gentle Thomas Trenerry has somehow found himself on the other side of the law for some reason. Again.

We don't yet know why the police raided his home. Tom does have a fairly extensive criminal past and has served time on what appears to be a few occasions. But fugitive Craig Cobb knows why it happened.

We do find it interesting that the first person Tommy Boy thought to contact was Craig Cobb:

Well Dale, as Tommy is a convicted felon, we're not sure he's quite the kind of refugee that would be welcome in a country that is already sort of not overly friendly to refugees. But hey, it might be worth a try. Maybe he could sneak over the border like his buddy Craig did? We're sure nothing could possibly go wrong. ;)

But Tommy was able to let everyone know that he was okay: 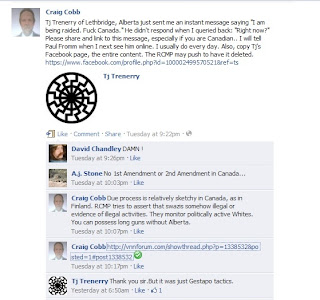 Wait. Did Tommy, an avowed National Socialist who proudly flies a Nazi flag outside his home, accuse the police in Lethbridge of acting like the Gestapo?

Uhm, Tom. Tommy. Tommy Boy. The Gestapo were the ones on your side.

Sigh... why are the pretty ones so dumb?

Would it surprise our readers to know that Trenerry is close to Reitmeier and Sturrup of WEB?
Posted by Nosferatu200 at 17:20

How old is Terry anyway? 50? And still talking about being "national socialist to the bone." Lame-O! Grow up dude, you have a fucking grandchild now.

What a dumb ass. And boneheads say they care for Canada. Fuck them they say fuck Canada well fuck all of em. Assholes the blog ARC Stands more for Canada and humanity.

And here I thought Alex Kulbashian had the corner on being a brown-skinned white supremacist.

Wasn't Mitch Fancey half black? Or at least 1/4? And what about Kage? See, they'll use anyone as long as they serve a purpose to suit their needs.