You know, we frequently make fun of the many name changes that the Aryan Guard/Blood & Honour/C19/ATB/ANC/CTV/ESP have had over the past 4 years, but WEB really isn't a hell of a lot better:

What Reitmeier is specifically writing about here is that many of the members of WEB are also members of a group known as the Aryan Nations Knights of the Ku Klux Klan (so in their brief history, they have been known as the Aryan Guard Renegades, Western European Brotherhood and/or Bloodlines, and now the ANK). The ANK seems to be some weird synthesis of Aryan Nations nougat and Klan chocolate rolled up into one nasty ass candy bar of hatred and are connected to the United Knights of Tennessee, Order of the Ku Klux Klan. The ANK does have a Canadian presence, albeit fairly minimal, with the HQ in Regina, Saskatchewan: 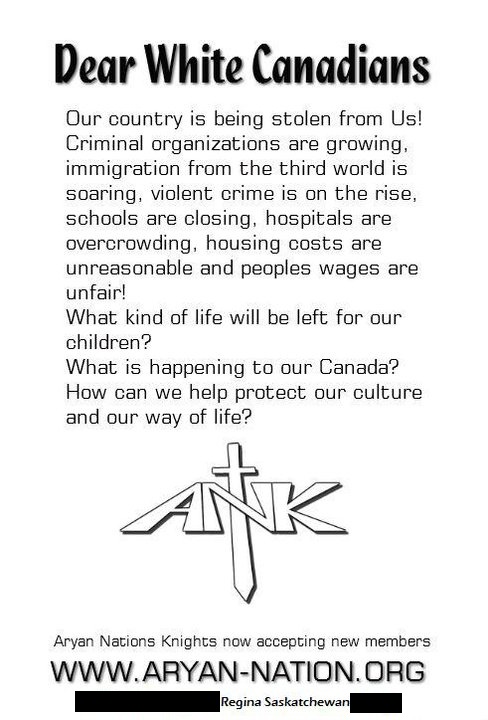 Of course, as we don't plan on helping them to recruit, we've blacked out the address.

"But ARC," we hear you ask, dear reader, "who is the big cheese in ANK? Isn't Regina Chris Water's territory with the Brotherhood of Klans?"

Well that's the funny thing. Chris Waters (the XXXXXXXL fella on the left..... we wonder if he is able to buy his Klan sheets of the rack or if they need to be specially tailored for him?), who was once the Grand Dragon of the BOK in Canada (damn, these acronyms are becoming tiresome) has left that Klan movement and is now the Imperial Wizard of the ANK in Canada.

Really. Every time we hear these Klan titles we expect to see a bunch of pimply kids in a basement making saving throws and casting lightning bolt so that they can defeat a bunch of orcs while on a quest for a magic sword.

Back in 2008, Waters and three Klan members visited Regina for the, "White Pride" march organized by the Aryan Guard. Since then, there has been a falling out between the Waters' Klan and the Aryan Guard (WN disunity? We are shocked AND appalled!) but the relationship between Waters and WEB has remained close. As recently as a few months ago, Waters was slamming the Aryan Guard/Blood & Honour/etc/etc/etc, and using us as their source material to do so: 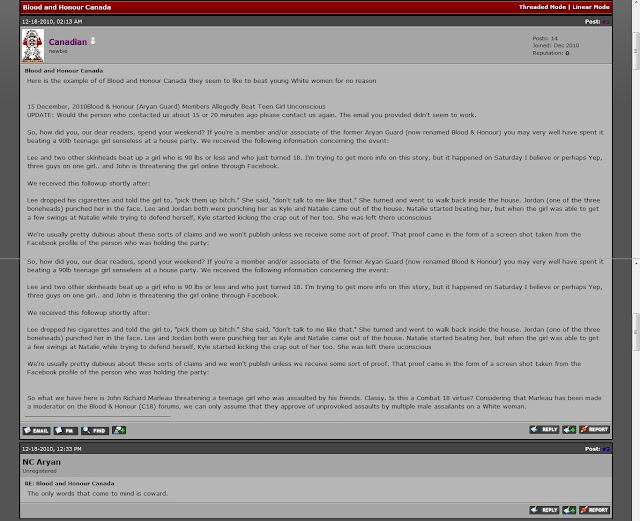 Well thankfully, Waters has found unity in the ANK as he writes about the rationale behind an autonomous Canadian Klan. We would like to apologize to our readers in advance for the rape of the English language that you are about to read: 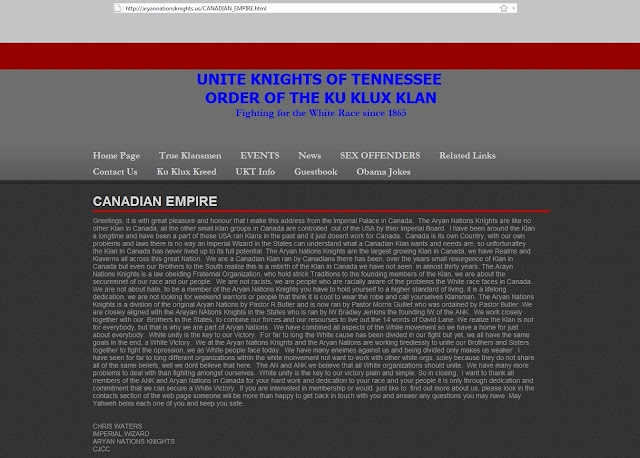 We were interested in the association with Morris Gulett, a long-time Aryan Nations leader with a long history of violent criminal activities recently released from prison after being convicted of planning a bank heist and possessing weapons a convicted felon isn't supposed to be possessing (Bad Mo! Bad!). One can only assume that Waters and Gulett must have a pretty friendly relationship, being that Gulett is sort of the spiritual leader of the ANK.

Uhm, remember what we wrote about the state of WN unity?

Yep. No love there. Now we aren't sure exactly what the deal is that set Waters off, but we do have to note a little bit of irony here in that, a few months before, Waters was ordering members to remove individuals from their Facebook friends who had run afoul of the ANK:

We're not sure what this will mean for the ANK in Canada. Probably nothing. And it's not as if Waters doesn't have his supporters:

Oh, Thomas Trenerry! How we've missed you and your crazy ravings! Like this one:

But of course, none of these people are about violence.

Jesus Christ! Can none of these WP morons spell?

Another hilarious post! Great work. Neo-Nazis are such clowns.

Can Chris Waters even fit behind his computer desk?

Maybe he has a Guttop...er um Laptop..

I was enjoying this read until you started with fat jokes. Hypocrite much? I would never throw a fat joke in an article for a paper, so you guys should really learn a new approach rather than really, really lame fat jokes. Really?

I just fucking love, so very much, how these tools dress up in ridiculous costumes and call themselves imperial wizards and grand dragons and don't seem to realize how bloody retarded it is. Yes, clearly the white race is superior, because only we could take a game of dungeons and dragons this far.

I like how some girl is licking that fat john look alikes nipples... or trying to get them?... either way, gross.

I'd like to take this opportunity to finally set the record straight here..

W.E.B. has always ONLY ever stood for Western European *Bloodline. Never have any of its members referred to it as ''Brotherhood'' nor ''Bloodlines''. Also, the name ''Aryan Guard Renegades'' was simply a not very funny joke. Nobody actually seriously considered themselves a member of a group under that name.