It would appear that the object of Paulie's odd infatuation has decided to make an appearance on the Facebook group created by Paulie in support of her as a, "political prisoner": 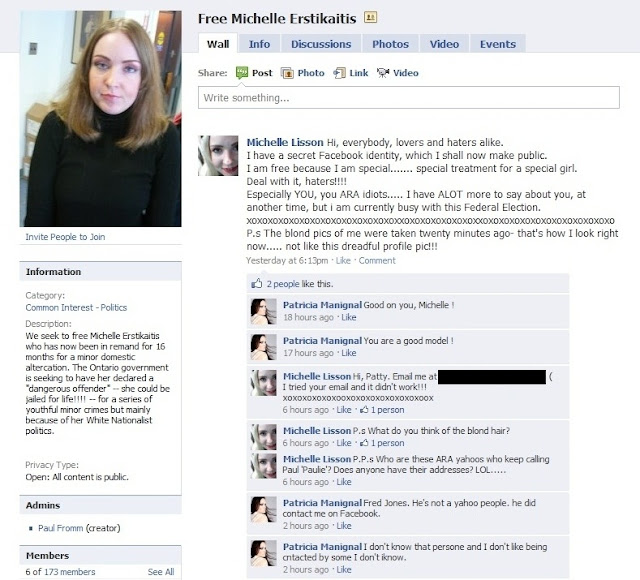 Oh oh! Though she makes the same erroneous assumption that we are affiliated with the ARA like Paulie and his fellow travellers do, it is pretty obvious she's talking about us.

Yay! We have a new fan! We'll be sure to hide the scissors and gasoline.

Wait! What? Fred Jones? You might want to try a little harder than that Patricia.

Interesting though that the first thing Ms. Erstikaitis has done upon her release is to begin working on Paulie's carpetbagger campaign for a seat in Parliament in Calgary Southeast. What might also be evident is that Paulie's French, "friend" who isn't his wife isn't really helping the case when she makes posts like these: 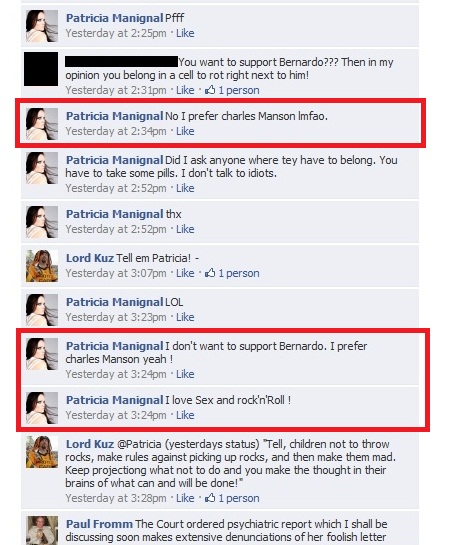 To be fair though, Patricia really isn't very bright.

Since Ms. Erstikaitis is now free and active online again, it really isn't us she needs to convince of her WN street cred. Paulie has spent what remaining capital he has left on trying to sell to other WN that you are one of the tribe, and we're afraid that his fellow travellers aren't buying what he is selling.

Here's a challenge for you Ms. Erstikaitis. Paulie claims as evidence of your long-standing affiliation with the WN movement the McVeigh letter from a decade ago, but more recently he added to your lore. He claimed that you were a member of Stormfront and have been for some time.

So, why don't you post a little note on Stormfront using this online profile? Any post you make will include the number of previous posts, as well as the date that you originally registered on Stormfront. This way it might look less like you're an opportunist who found a sucker in Paulie, and you could argue your case directly to the boneheads who might give a damn.

In short, we're calling your bluff. In reality it's sort of a win-win for us if you do or do not have an account, but we can explain why later.

Put up, or shut up, deary. Your reputation such as it is, and Paulie's, might be on the line.

It might also behoove you to learn the rhetoric as well. You see, the people you claim as your own weren't fans of Dubya. In fact, you know that war you supported? Most boneheads view it as yet another in a clumsily contrived list of, "proofs" of a "Zionist conspiracy" to rule the world and kill gentiles and, presumably, puppies and kittens.
Posted by Nosferatu200 at 23:19

Just an update on the Courtenay Attack Case.

During sentencing, the attackers all got a slap on the wrist.

Oh Michelle Erstikaitis/Lisson!!!! YOU are a special fuckup. Paulie???????????? She'll be coming after you next you dumbass. I suggest you have 911 on speed dial for that silly bitch when she comes after you.