We mentioned already the disconnect of a political party who's chief aim is the separation of the Western provinces from the rest of Canada, especially from those effete, red wine-drinking residents in Ontario, asking a life-long and current resident of Ontario, who as recently as this past October was running for mayor of Mississauga (fyi, he did really badly), to stand as a candidate for said separatist party in Calgary, a city that is not and will not be the candidate's residence before, during or after the election takes place.

Hmmm, try to say that with one breath. It's not easy.

Did we also mention said candidate's message, in part, is about keeping Alberta jobs in Alberta for Albertans?

It looks like a few others in the bonehead universe are also troubled by the contradictions:

Well well Robbie! Learning to think are we?

Of course the majority of the Fromm sophistry brigade are practically orgasmic about what they seem to believe will be an overwhelming victory for their cause. We on the other hand are a bit more dubious when it comes to Paulie's electoral success, especially when we read this (we added a few comments for clarification): 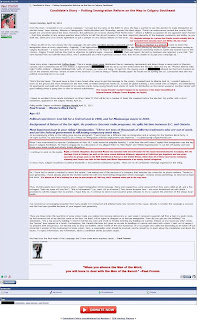 So, to summarize, Paulie is going to claim that his long, documented history of associating with Neo-Nazi and other racist groups is fiction and he's going to robo-call Calgarians while they are eating dinner.

Right. Good luck with that.

We do have to ask though, Paulie, if your anti-immigration message will be quite as eloquent as this below? 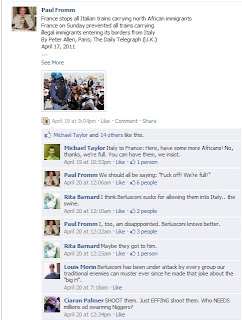 Fromm's such a lifer.