Paulie, who earlier announced another run at public office, may just have jumped the shark on this one.

In August, Paulie and the Aryan Guard (soon to be re-named Blood & Honour) protested in front of Jason Kenney's constituency office: 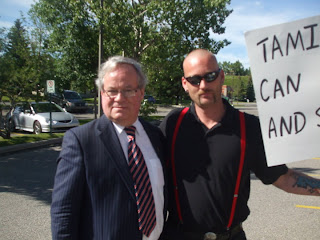 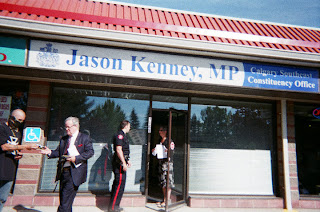 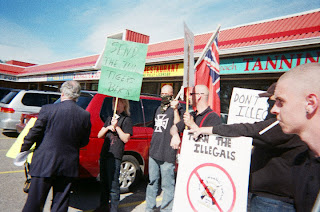 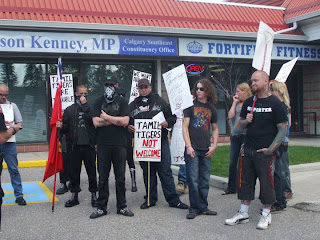 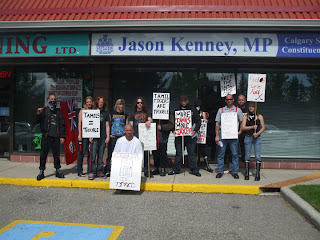 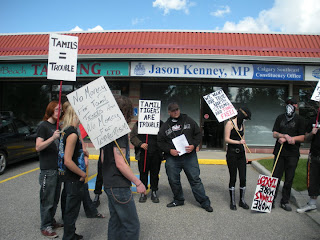 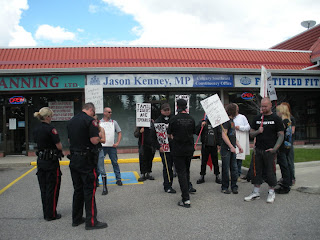 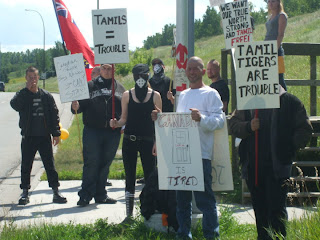 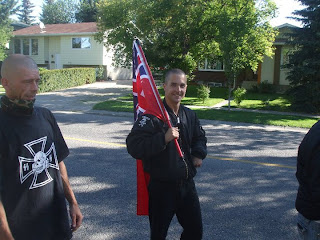 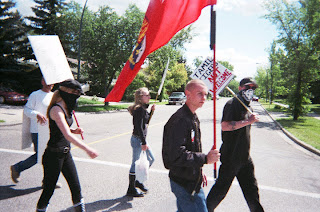 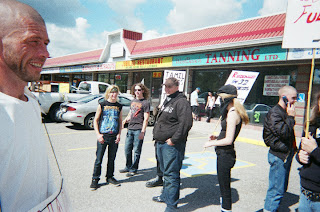 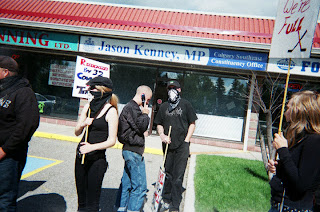 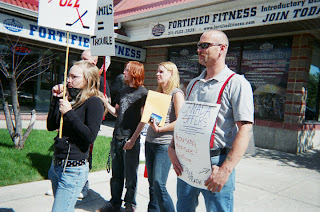 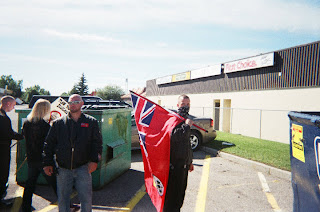 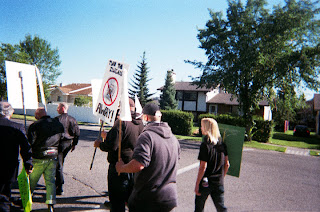 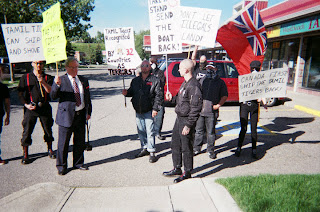 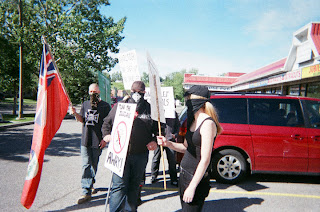 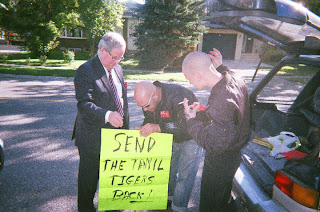 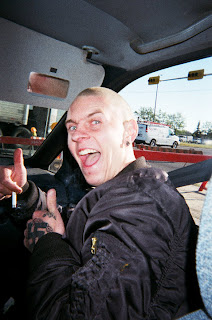 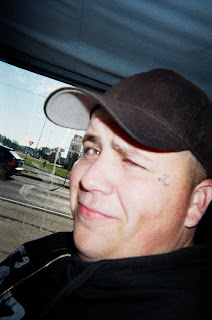 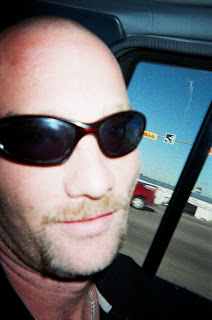 Our readers will notice such bonehead luminaries as Kyle McKee, Lee Ebel, John Marleau and Andrew Benson among others, most of whom have fairly extensive criminal rap sheets.

Paulie has had a bit of a hate on for Jason Kenney for a while now (though given what Kenney said in a recent speech, we aren't entirely certain why) and now he seems determined to humiliate himself by running against him.... and getting crushed in the encounter, no doubt.

Yep. Paul Fromm, whom we might remind our readers is from Ontario, is running under the umbrella of the  separatist Western Bloc Party in Calgary Southeast.

We believe our American friends in the Southern states would refer to men such as Paulie as a carpetbagger: 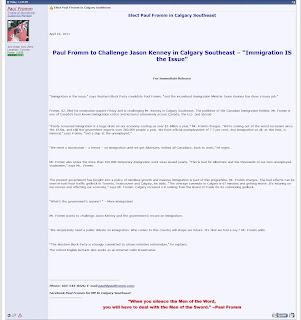 So will Paulie get much over 200 votes? Given the history of other fringe candidates, we think likely not.
Posted by Kurt Phillips at 22:34

Is he even eligible to run in that riding?

It's one of the charming quirks of a parliamentary democracy. Sir Wilfred Laurier once ran in Prince Albert, Saskatchewan.

Who is the blonde girl

Okay, that was a bit of a cheap shot.

If you're asking about the woman with the mask, that would be Natalie most likely.

Not the first time I have laughed at an anti's cheap shot, and probably not the last.

We all know Natalie isn't blonde though..

Just for clarification I was meaning the 4th pic from last mods about Natalie's pot-bellied appearance ;)

Paulie always talks about himself in the 3rd person .. reminds me of the Seinfeld episode 'the Jimmy'.

Paulie is running for election. Paulie is gettin upset. Don't piss off Paulie.

Why don't you fine people run in the Federal Election?

Do you find your $585 Welfare cheques not enough to compete with?

Are you afraid you'll get even less votes than Paulie?

Do you not stand up for what you believe in?

Do you find Bonnie/Jason to be the best canidate?

Could Bonnie/Jason even afford to buy a made in China suit?

Could you, Clay, reach out and touch the common people with your horrible raps?

Do you find it's quite easy to whine about somebody standing up for what they believe in, without hiding behind a computer, slandering people who do?

Could you handle all the money without sharing it with your fellow Collectives?

Would you spend the donation money on 2 oz. of prime Kush, and if there was some cash left, would you feed your kids?

Do you find the Conservative leadership to be unjust and unfair to Immigrational matters?

If so, the voters need you!

Natalie always tries so hard to keep her face covered. So hard, that it's easy to pick her our. Such a proud white warrior....

He's clearly still upset about this:

Further humiliation and defeat is the remedy! He must be a masochist.

Hehehe..... we had forgotten about that incident. It's as funny now as it was when they were shut out of the HOC and the crying that it resulted in.

You know, you've been posting the same thing for a while now. It seems you think we are someone who we are not. We sort of ignored it until now, but we are a little curious. Who is "Clay"?

Clay is the mastermind of all of things Collective. A circle of Ravens feast on the corpses that this "blog" leaves in its wake.

I mean, who's the real danger here? I'd have a Tamil family as my neighbour before any of these losers. I probably wouldn't have to pick up beer cans from my lawn, either.

The comments made about people's appearance detract from the blog. Judging from the other pictures Natalie has a pretty hot body. That's not her issue, the issue is her racism. Hell if she wasn't such a racist bitch, I'd do her. It's counterproductive and distracting to focus on people's appearance instead of the real problem, which is their beliefs.

Jason Kenny MP: Uhm, alright crazy person. If you wish to believe that, all power to you. lol

Anon (poster 18): With due respect, it is a wee bit ironic that in your mild criticism of the comments concerning Natalie's physical appearance you state that, if she wasn't a racist, you'd be willing to, "do her" because she has a, "pretty hot body." ;)

That said, we wouldn't be too surprised if you were right about his total vote count. It could be as high as 300 or so, but past results of fringe parties puts the number most likely in the 200 to 250 range. Of course he has the baggage of being closely associated with the Aryan Guard and their very public and violent face.

Having seen her naked I can definitely say that's her. She just probably dyed her hair. Always following behind Kyle, the mighty Aryan viking. I would have thought she grew out of it by now, her parents must be so proud.

Why do these freaks like to infest Western Canada? All Conservatives that I have talked to all dislike these losers.

Natalie is not blond.

1. with a 'party' name like 'western bloc' (or whatever it is... i call them the 'white bloc', mostly because it makes me laugh), paul is going to rope in some separatists -- people who got to the polling station intent on voting conservative as the lesser of two evils only to find what looks like separatist ticket waiting to be checked.

2. "Jason Kenney, MP" is clearly a little deranged... I mean, anyone who castigates people for "hiding behind a keyboard" while using an obvious pseudonym on the internet clearly has a problem with internal consistency.

The blonde girl is definitely Shannon Butt, she is dating Lee Ebel

just out of curiosity, were you all sent these photos from the Tamil thing or were they taken from someone's facebook?