Remember when Paul Fromm ran for Mayor of Mississauga in Fall of 2010, and we held a contest to redesign his campaign banner?

There has never been a more appropriate time to revisit the winning entry of that competition:

You see, when Fromm originally announced that he would be running in the federal election, we assumed he’d run in his own province as an independent. When it was later revealed that Fromm, an Ontarian, would be running for the separatist Western Block Party in Jason Kenney’s riding of Calgary Southeast, we instantly had a hunch about his motives. While Fromm explained it like this…

“A year ago, I promised Western Block Leader Douglas H,. Christie that I would run for his Western Block in the next federal election.”

“I had originally intended to run in British Columbia. However, he and I agreed that Immigration Minister Jason Kenney would make a far better target in Calgary Southeast. The campaign would let me highlight Canada’s failed immigration policy.”

… we naturally assumed that “taking on” Kenney had less to do with Canadian immigration policy and more to do with this: 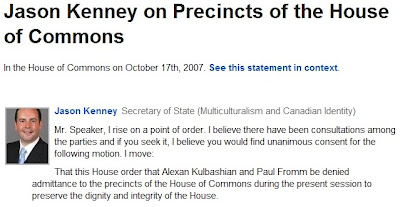 Seems we were right, and Fromm is indeed still licking his wounds from the beat down he received from Kenney back in 2007: 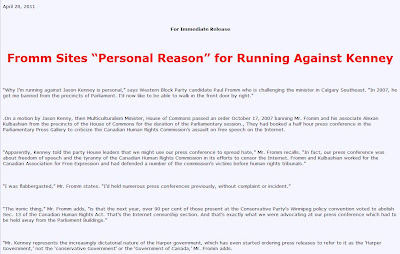 The man does hold a grudge. And if it hasn’t always been painfully obvious, it should be noted that Fromm writes his own press releases, making the above read like some kind of bizarre interview with himself. (The former English teacher might also want to look up the difference between “Sites” and “Cites.”)

We suppose this self-disclosure is intended to demonstrate Fromm’s fighting spirit. The unjust humiliation suffered at the hands of King Kenney will not be forgotten! Fromm WILL strike back, and he WILL prevail, and he WILL lose horribly and he WILL never ever be let into the House of Commons and he WILL blame it on the political apathy of the Canadian people! Yeah! That’ll show ‘im!

You know, if Paulie wasn’t such a terribly racist asshole, we’d be inclined to feel a bit sorry for him. How else can you feel about someone who, in connection with his election campaign, publicly releases photos like this?

And it’s a campaign which got off to a rough start- as even Fromm admits with attempted (and failed) self-deprecating humour:

“April 7, it was on to Calgary. I managed to fall out of a plane. Yes, on landing, the tiny Air Canada propeller plane was greeted with an aluminum set of stairs down which passengers could deplane. Heading down the steps, with a briefcase in one hand and my laptop in the other, my boast heel caught in on one of the steps. I pitched forward, dropped my laptop and briefcase and grabbed the railing. The ladder contraption pitched forward. I landed on the asphalt tarmac with the aluminum contraption on top of me.”

Since then, it hasn’t gotten much better. The hostile, “who-the-fuck-is-this-whacko?” attitude of the Calgary Southeast electorate moved Fromm to the dramatic action of telephonically harassing tens of thousands of voters to force people to pay attention to him:

“In many ways, Calgary Southeast is political Deadsville. I encountered widespread apathy. There are no all candidates’ meetings organized in the riding… So, I have had to devise a method to reach the voters. I am making use of the services of a company that matches the voters list to phone numbers… Thus, 25,500 people have twice heard a short, cogent immigration reform message. Many were supportive, some annoyed that they were called at all, and a few outraged: “take my name off your list!”; “this is harassment!” [no, mam, it’s an invasion!] Two furious invasion fans – one even threatened me with death – promised to call the Calgary Sun to protest.”

Well, clearly that worked. We do wonder what constitutes “many” out of 25 500, but we doubt we’ll find out. And Fromm’s door-to-door canvassing hasn’t met with much success either:

“Last week, I received a peevish call from a man in a posh condo. He had received one of my election cards at his door. He didn’t call to agree or disagree or to discuss immigration. “How did you get into the building?” he demanded,. “It’s a top security building.”

We see shades of the 2007 HOC debacle here. Both Jason Kenney and the aforementioned posh gentleman wanted Fromm off the premises to protect the dignity and integrity of their respective houses. And really – wouldn’t anyone instinctively do the same?

So, given all this, we’ve often wondered if Fromm isn’t a bit of a masochist, or if he’s just one of those people who is critically lacking in self-awareness. But then we remember that the entire WN movement is one of those people, and Fromm is just the symptom of a larger problem:

Yes, too many “supid”, brainwashed white people in this country. But take heart, discouraged boneheads - they CAN be awakened with the right approach and a charismatic Trudeau-esque leader! 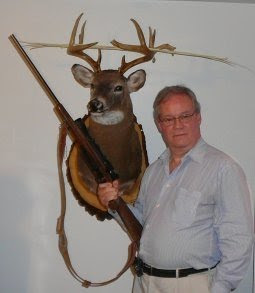 Hmm. It might be a long wait yet. In the meantime, mainstream white Canadians can get a taste of what a WN nation would look like by heading over to the forums on Stormfront Canada, where they’ll be greeted with thread titles like this:

This last thread was started in 2009:

And was active as of a few days ago:

Ummmm. Okay, White Nationalists. So a white lady is seated next to a black guy in a TD Canada Trust advertisement from 2009… and you guys are still talking about it.

The movement’s certainly got its finger on the pulse of white Canadian priorities… assuming that most white people in this country spend their time obsessively concocting ways to Blame the Jew.

Yeah. Somehow we doubt that.

Fromm can’t even lay claim to the coveted white supremacist vote in Calgary Southeast, and there’s nothing like a federal election to make the rest of the bonehead nation extra conscious of the futility of their movement:

Attempting to compensate for bottomless failure and irrelevancy isn’t just Fromm’s problem. It sure ain't easy being WN in Canada these days.

Arent they ever god damn dumb. I see the ad with the black man and the white woman as political correctness, like a "token" in an old movie so that they had "one black person". A little ridiculous if that is indeed the case, as race should not matter at all but I dont really think anyone believes its a giant Jew conspiracy to "softly genocide" out whites... hahaha