This Represents the Reality of the "White Nationalist" Movement in Canada

We once decided that we were no longer going to write any articles about Kevin Goudreau because even in the, "White Nationalist" movement, he is a pariah. Sure, we alluded to him euphemistically, but it wasn't even sporting to make fun of him anymore. Then, the "National Post" inexplicably decided to make him the face of the fascist movement in Canada.

But you know what? Covering Goudreau here actually has been very useful since it has shown us yet again how polarized the movement is in the country.

After the "National Post" article came out, Goudreau's ego had, as expected, exploded. And he actually tried to present himself as somewhat of an intellectual.

It couldn't have lasted and boy, oh boy, did it blow up.

We begin with Goudreau being challenged for participating in the "Post" interview, which results in Goudreau making grandiose claims about his importance:

Right. Nothing new here. We've seen this song and dance from Goudreau many times. When he finally goes off the deep end though, it is epic not only because of the meltdown itself, but who else gets dragged into the discussion by the participants:

Oh, but we don't need Goudreau for evidence of polarization. Keep in mind when you look at these next screen shots that both these poster can't stand Goudreau, but they also can't get along with each other:

We've been criticized, in some cases justifiably perhaps, for how we cover Kevin Goudreau. But we think that it is important to provide our readers with a snapshot of the "White Nationalist" movement as it exists in Canada at this point. For all his faults, Goudreau's online presence has been very effective in ferreting out the true feeling boneheads have towards each other.

But, for further humiliation, because we can be very, very small people, here are some recent posts Goudreau made on his Facebook account:

We have to assume that this 19 year old is as real as all his other girlfriends, (Alicia Reckzin not withstanding). 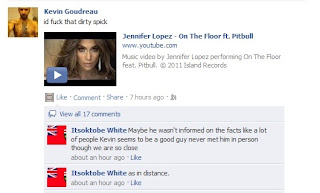 While his Facebook friends are confused, we aren't. A meltdown on Stormfront is often followed by off the wall behaviour elsewhere. 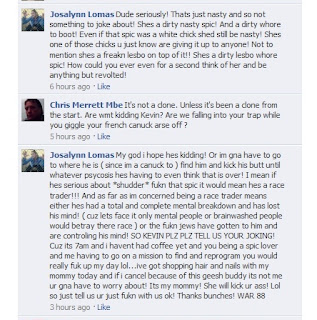 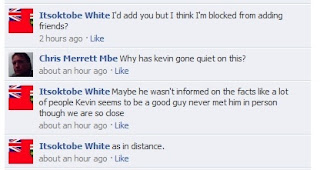 If things go according to schedule, we might expect Goudreau to drop out of sight for a few months soon.
Posted by Nosferatu200 at 22:06

All I can say is WOW!! what a pack of LOSERS!! If you did not cut and paste actual Stormfront and Facebook postings, I would not believe that such morons and wastes-of-life even exist.