Beattie Troubles and Where Have the Boneheads Gone?

Hey, remember John Beattie? Of course you do if you're a reader of this blog or if you are at all interested in the history of the Canadian racist movement.

It appears that someone has made a complaint against Mr. Beattie and he's a little concerned about it now:

In fact, Beattie spoke about this on his really bad Internet radio program the same day he posted his last request to Dan Martin or, "OdinPatrick" as he was known on Stormfront.

Normally we wouldn't provide the link, but we'll make one of our rare exceptions in this case.

But as interesting as this turn of events is, we were actually more interested by something else we found. Take a close look the above screenshot. Notice anything different? Here's another one: 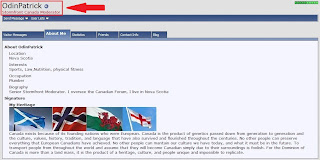 Dan Martin was at one time a financial supporter of Stormfront. It no longer appears to be the case since his name is no longer in italicized red with a, "Sustaining Member" label.

Big deal. Perhaps he's just forgotten to make a payment. But then we realized that we actually haven't seen much of Dan on Stormfront for a long time. How long has Dan been absent from Stormfront?

Sort of makes sense then why there are epic flame wars on the Canadian forums that go on for days before a moderator deals with them.

Dan isn't the only well-known (at least in the circles we follow) bonehead who has seemingly abandoned Stormfront. Bill Noble also stopped posting at around the same time:

While still a "Sustaining Member", Noble hasn't posted anything on Stormfront since December 6, 2010. He confirms that he is no longer a contributor on the Blood & Honour forum where he also contributes sporadically: 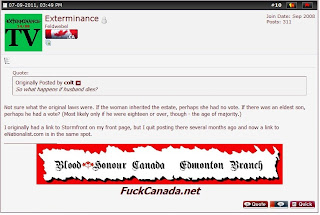 We just find this interesting.

To conclude, we suggest Mr. Beattie might want to make his request of another, more active, Stormfront moderator.
Posted by Nosferatu200 at 04:24

Probably didn't like it when his regular lunch stop got a visit. Good. Stay down.

Polygamist!!!!!!!!!!!!!! For fuck sake. No posting on SF anymore? He's too busy trying to find some wives for himself. THAT HE CAN`T SUPPORT, Oh shame on you Duncan Idaho.

Thanks for the research!