Four of the Free Dominion "John Does" Have Been Identified

Continuing our focus on FreeDom (and enjoying the reaction of the likes of Edward Kennedy) we've learned that four of the anonymous forum posters named in Richard Warman's civil suit have been identified:

We've been sitting on this for a few days now but we have been reading the fallout on FreeDom:

Since the folks at FreeDom are super smart, Mark Fournier has jumped to the conclusion that the identification of these individuals must be the result of nefarious activities on the part of Mr. Warman:

Well, since you asked so nicely Mr. Fournier, here's how their identities became known spelled out nicely in Mr. Warman's most recent affidavit: 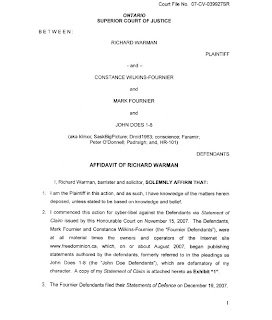 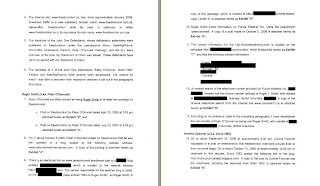 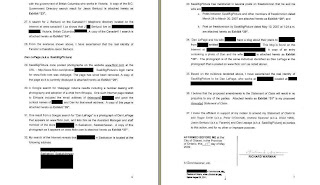 We've likely redacted more than we actually needed to, but just to be on the safe side...

UPDATE: Bloody hilarious. Evidently ARC is an insignificant failure and no one pays attention to us, however within half an hour of our posting the article there was a mention of it on FreeDom and Connie bumped up an old thread that complained about our having commented on her and Mark shaking hands with Fromm and his wife (while we were going to let this go when she first accused us of being hypocritical, we think we will discuss this in greater depth at a later date). We certainly didn't let them know we had posted it, so it would seem that some of their own readers have at least a passing interest in what is written on this blog.

And, get this. Now some of them are making up quotes and attributing them to ARC:

Maikeru: 'Since we [ARC] have yet to address the situation in Gaza, it might be a good idea to explain what our position on the entire Arab-Jewish conflict is so people can understand. The way we see it, if Jews and Arabs can't seem to come to a peaceful solution to their problems after thousands of years of fighting, we most certainly aren't going to be able to contribute anything of value. Gentiles and other people who are neither Jewish or Arab who want to exploit the troubles in the Middle East for whatever political or financial agenda they have should be hauled off and shot.'

Now, we assume that 'Makeru' is referring to our statement regarding our stance on the Palestinian and Israeli conflict and the unwelcome involvement of the Aryan Guard and some extremist Muslims. We invite our readers to examine our article and determine whether or not we wrote what was attributed to us. Of course a simple Google search will show that the quote attributed to us originated on the FreeDom forums and not here on this website. If our position on the crisis in Gaza appeared anywhere else on the Internet and if there was any editorializing by the person who republished our position, we do not necessarily support their ideas.

Free Dominion claims to be, "the voice of principled conservatism." We invite our readers to determine the accuracy of that claim.

Thank you FreeDom for making our day. We had a great laugh about this. Please keep it up.

UPDATE 2: Back from our mini vacation. We redacted slightly more information on the final page of the affidavit regarding one of the John Doe's family members (although there was no mention of a name in the unredacted section, it did discuss a family relationship).