Anti-Racism March in Calgary A Success

Roughly 60 to 70 people began marching from Plaza Theatre to Riley Park, an area where the Aryan Guard has been especially active in recent months. On the way a number of passersby joined up with the march. There was also a great deal of support from the people and merchants who work in Kennsington who have to put up the Aryan Guard but who are not at all pleased with their presence.

Of note that despite the fact the Aryan Guard consider this area to be, "their turf" not a single member was spotted during the march.

Congratulations on a job well done.

Unfortunately, while the Aryan Guard didn't show up to harass the much larger number of marchers, it's believed that they were involved in the vandalism of a home of one of the organizers while the residents of the home were asleep: 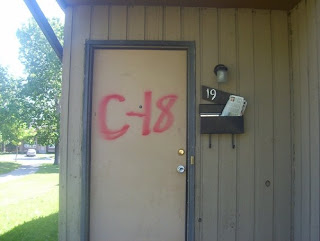 At around 10:30am June 27th Anti-Racist Action (ARA) public spokesperson Jason Devine went out his front door to take out the garbage. It was at that point that he saw graffiti on the front of his family's house. Specifically on the front door was spray painted in red "C-18" which stands for Combat 18 (or C18) which is the "armed wing" of the racist British neo-nazi organisation Blood & Honour. On the front window spray painted in black was a swastika. This obviously occured some time in the early morning after 1:00AM. 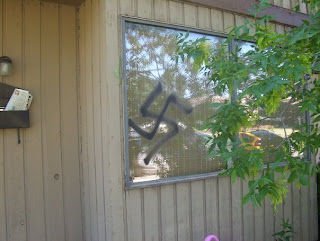 Anti-Racist Action and the lives of Bonnie, Jason, and their four children. This is a threat designed to inhibit ARA from attending the rally of teh same day at 1:00PM in Kensington. This is also a threat to all people who stand up against violent racist thugs. We will not be silenced and we will not give in to terror!

And yet AGAIN, we at the ARC Collective (damn, that's cool) are NOT affiliated with the ARA, though if they wish to send us information and find your blog a useful source of information, good on 'em.

In addition to the press release, the "Calgary Sun" published the following article today:

Targets of a firebomb attack last year, anti-racism advocates yesterday found a swastika and other neo-Nazi symbols sprayed on their house.

Bonnie and Jason Devine, parents of four children, said it's no coincidence the most recent abuse was levelled at them on the same day they planned to hold an anti-racism rally in Kensington.

"This is to try to make us terrified of what we're doing -- but we won't stop speaking out," said Jason, spokesman for Calgary's Anti-Racism Action Group.

A black swastika was found spray-painted on the front window of the couple's Radisson home.

Their front door was spray-painted red with the symbol "C-18," which stands for Combat 18 and refers to the armed wing of a British neo-Nazi group.

"It's always shocking but it's not a surprise," said Bonnie.

"It actually fuels the fire to fight racism."

The couple didn't let the "threat," which they believe is the work of local white supremacists, deter them from marching through Kensington to voice their opposition to the neo-Nazi group.

As many as 50 anti-racist supporters joined the couple, chanting "Clean the streets, run them out," as they marched from the Plaza Theatre to Riley Park.

The demonstration was prompted out of concern that neo-Nazis recently incited violence in Kensington, said Bonnie.

She said anti-racist members have been beaten in the area by white supremacists in recent weeks, while a Native man was also allegedly assaulted by members of the neo-Nazi group.

"It makes me alarmed that they're this bold," she said.

"It tells me we're not doing enough -- the community needs to band together and do a lot more."

Many participants of yesterday's anti-racism demonstration covered their faces with masks and bandanas out of fear of retaliation from neo-Nazis, said Bonnie.

"They're afraid that when they're walking alone they'll be targeted," she said.

Bonnie said she's concerned the ranks of the neo-Nazi group in Calgary are growing, estimating there are up to 30 members.

Police maintained a strong presence at yesterday's march, but unlike past demonstrations, there wasn't a clash with white supremacists.

It's not entirely accurate to say that no members of the Aryan Guard were spotted during the protest. John Marleau and two others were again seen prowling the alleys in a car, while a number of people known or believed to be associates of the group were seen trailing the larger demonstration and taking pictures.

Never assume that because you dont see them that they aren't there. That's almost as dangerous as ignoring them. Being sneaky isnt a particularly complicated chore.

The classic Nazi skinhead sticks out in a crowd, but most of it is window dressing. Change all the clothes, add a hat and a different pair of shoes and they are nearly indistinguishable from other citizens. Some of the heavier members would either have to wear a tent or hide in a car.

Normally you'll find them hiding, taking pics of the people there, trying to get intel on the people that are against them.

But bonehead intel is normally such a joke, when they decide to publish it on their websites it's worth a good laugh. Everyone seems to be a communist, or gay, or Jewish in their little world.

"Classic nazi skinhead"... ugh... I know you did not mean it, but that makes no sense. "Classic nazi bonehead" is what you meant ;)

i thought you guys might like to see a photo story i stumbled upon on the canon forums . it is a collection of photos from the march protest .

Adding the - in Combat18 shows it couldn't be a lone wolf.

Obviously done by John Marleau. Combat 18? How could you even doubt that fat waste of space doesn't "tag" C18 wherever he goes, hell he even tattooed it on his neck.