Yet ANOTHER Pegida Canada Rally In London Fails

One day Pegida Canada might get the message that neither they nor their message are welcome in the city of London, ON and they will leave. While this was not that day, they seem increasingly discouraged by their low numbers confronting much larger counter-protester who spend much of the time making fun of them.

ARC has received permission from Mike Roy to who was one of the counter-protesters opposing Pegida Canada who this time brought along what appears to be a member of the Canadian Combat Coalition and a handful of members of the Soldiers of Odin. Yes, there are actually still a few small chapters that exist in BC, Alberta, and Ontario though their numbers are dwindling as evidenced by their sad showing today:


Really, I honestly don't know why they continue to subject themselves to the ridicule and humiliation. Perhaps they have a bit of a masochistic streak?


On the other side, Pegida, trying to put a brave face on another failure, tries to polish a turd:

As they are walking to City Hall, Pegida Canada makes it clear they don't care about Islamism or Islamic extremism. Their targets are Muslims. Full stop:


The main speaker is "Jenny" (not her real name) who is the spokesperson for Pegida Canada. "Jenny" has difficulty with the sound system and is frustrated by the counter-protesters and asks the police to stop the noise they are making presumably because while she favors free speech, she doesn't actually mean she's for it for people other than her side:


When she finally does get started, "Jenny" complains bitterly about how unfair it is that they have been labeled as hateful bigots and that they deserve an apology, because libeling the Muslim community is acceptable but NOT people who look like them! That is an outrage!

Really, they don't seem to get the concept of irony here:


Next it is time to continue the slander of Iqra Khalid. First "Jenny" mentions the town hall that took place on Thursday which was disrupted by Islamophobes who had every intention of disrupting the event, complaining that questions were not answered by the panelists which strikes me as just a bit of chutzpah on her part. She then goes on to claim that Khalid, who's non-binding private members motion to condemn Islamophobia, "and all forms of systemic racism and religious discrimination" is irrationally considered to be a blasphemy law, as having links to the Muslim Brotherhood. This is due mainly to Khalid's involvement in a Muslim Students' Association in university and the fact these folks think that being a Muslim is really all that is needed to be linked to the Muslim Brotherhood:


"Jenny"goes on a rather lengthy rant about halal foods, though she does later admit that kosher practices aren't that much different but that's not the point! She does carry on about where the funds go which strikes this writer as being very closely parallel to the antisemitic "Kosher Tax" bs. I will spare the readers the rambling here.

"Jenny"ends her speech with what I think is quite enlightening concerning Pegida's position. They seem perfectly okay with religious dogma being used to govern the country so long as it is THEIR religious dogma:


The final speaker rambles on with no real direction. It is quite a something to behold. All she needs to do is include some references to "deadly worldwide mad gangster god" and it would be a rant worthy of Francis E. Dec:


Now, as they leave and if you listen carefully to the comment you'll hear some not so subtle homophobia which, considering their Islamophobia, isn't exactly surprising though it is somewhat awkward considering not long before they had claimed concern for the well-being of the homosexual community:

After some time to reflect, Pegida Canada offers this:

So, that's good news and to be sure it is very good news. Pegida Canada's numbers have continued to decline since their first also largely outnumbered protest at the end of August when members of the Canadian Combat Coalition and some III% militia participated.

However, there is also some information that should be cause for reflection.

ARC had posted an article concerning the events in Mel Lastman Square in Toronto where Proud Boys, Northern Guard, and Threepers bragged about bringing weapons and in some cases using them against counter-protesters when they could get away with it. One of those individuals, Shawn McBeath (posting as "Bain Scott"), had also suggested he would be participating in the rally today in London and engage in similar tactics: 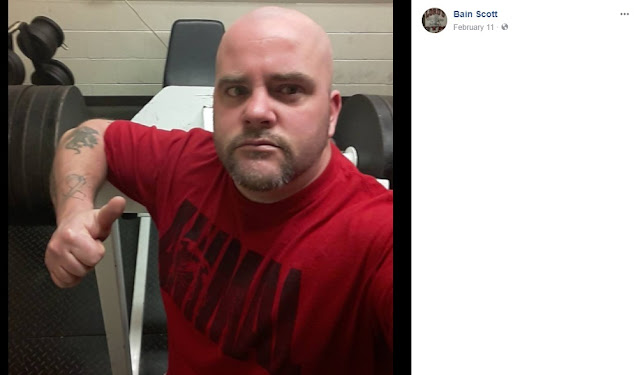 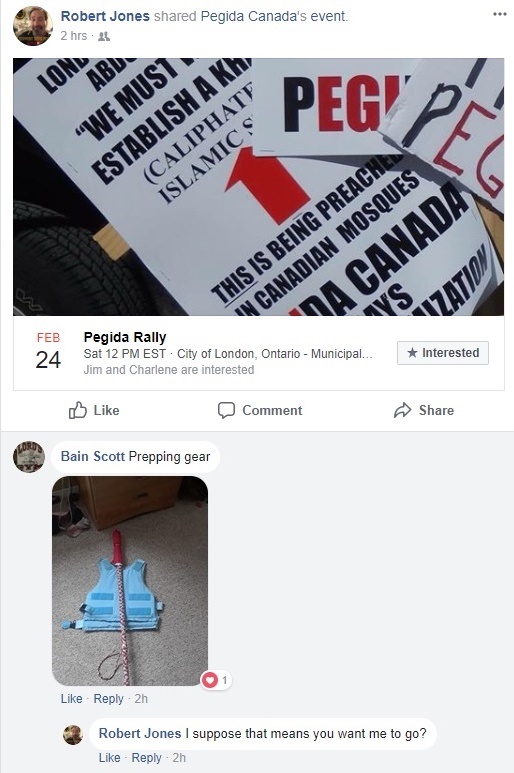 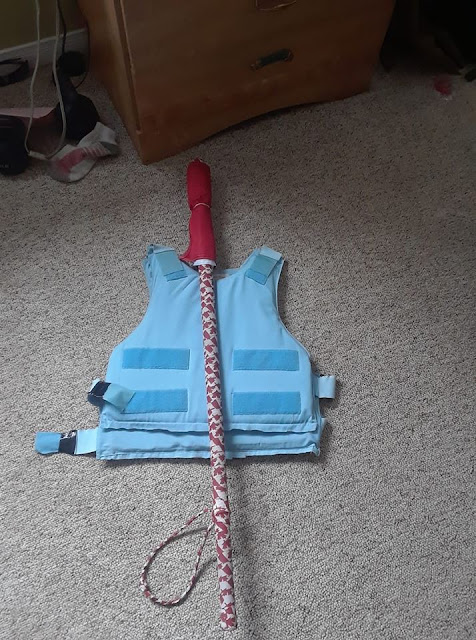 Concerning the flagpole in the photo, this is what he said about it during the January 27 event:

While McBeath doesn't appear to have attended this protest, we know that Claude Roy of the SoO was there and he had an 8' knife strapped to his body:

Somehow I'm not so sure that Claude Roy, his SoO, and the Pegida crew (what's left of it) would be pleased if the counter-protesters brought weapons.

In any case, people of London, great job!