While the bodies are still warm from the latest mass U.S. school shooting, at least no one has the lack of taste or class to publicly defend gun rights, oh, wait, ... pic.twitter.com/19WLJ5AnBX
— CC (@canad1ancynic) February 17, 2018


A total of 17 lives lost because too many Americans love their guns more than they love their children:


The 19 year suspect whom I will endeavor not to mention by name other than in the screen shots was, by all accounts, a very violent individual with an obsession with firearms and violence. Expelled from school in part because of his violence tendencies, former class mates who have been interviewed have said that he would wear "overly patriotic" t-shirts and a MAGA baseball cap: 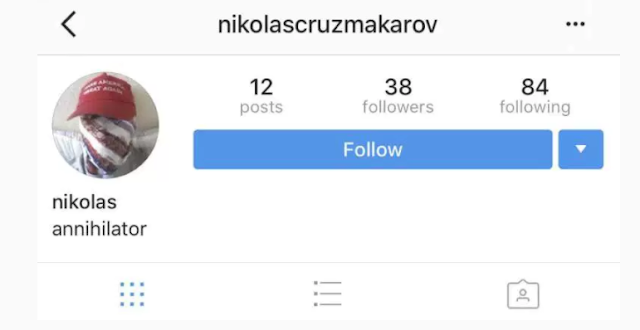 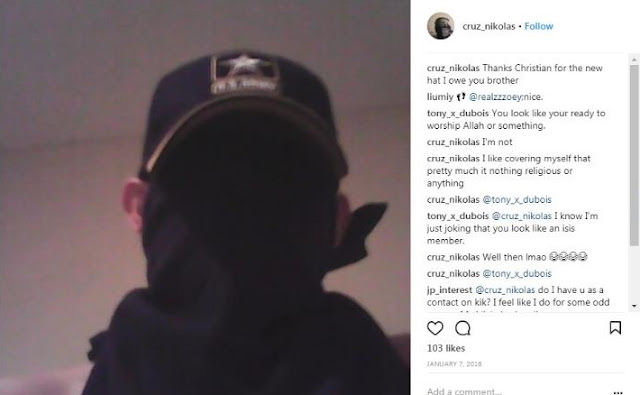 Though initial reports linking the alleged shooter to a Florida-based white supremacist movement proved to be untrue and was yet another alt-right effort to troll the msm, it has been discovered that he did hold racist, anti-Semitic, Islamophobic, misogynistic, and homophobic views that he posted on social media:


CNN, investigating comments the shooter may have left on a now-deleted YouTube channel, was added to the private Instagram group by one of the active members in it. The responding group members, who appear to be younger than 18, have refused to confirm their identities to CNN on or off the record.
....
Racism was a constant theme in the chat group, which was called "Murica (American flag emoji) (eagle emoji) great" -- a name it was given by Cruz.

The hatred he and others in the group espoused met little resistance from its active members. In one part of the group chat, Cruz wrote that he hated, "jews, ni**ers, immigrants."

He talked about killing Mexicans, keeping black people in chains and cutting their necks. The statements were not made in jest.

There are hundreds of racist messages, racist memes and racist Instagram videos posted in the group.
....
Cruz said he hated black people simply because they were black; Cruz hated Jews because he believed they wanted to destroy the world.

After one member expressed hatred for gay people, Cruz agreed, saying, "Shoot them in the back of head."

White women drew Cruz's hatred as well, specifically those in interracial relationships, whom he referred to repeatedly as traitors.

Almost immediately after the shooting, a number of far-right and alt-right groups and individuals began circulating false information about the suspect. Before any of this information came out, the alleged shooter was characterized as a Muslim, Muslim convert, a registered Democrat, and a member of "antifa." Others claimed it was a "false flag" such as those who follow Alex Jones. Photos of completely different people were claimed as the suspect even when it didn't look any bit like the alleged shooter: 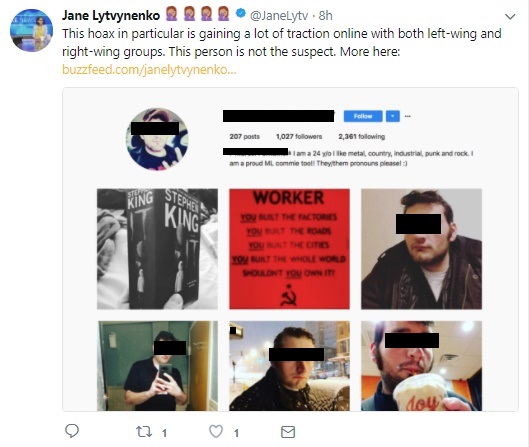 Their Canadian counterparts have followed suit. 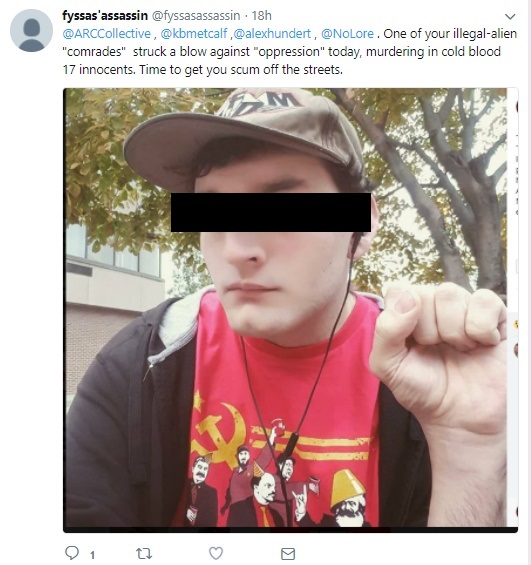 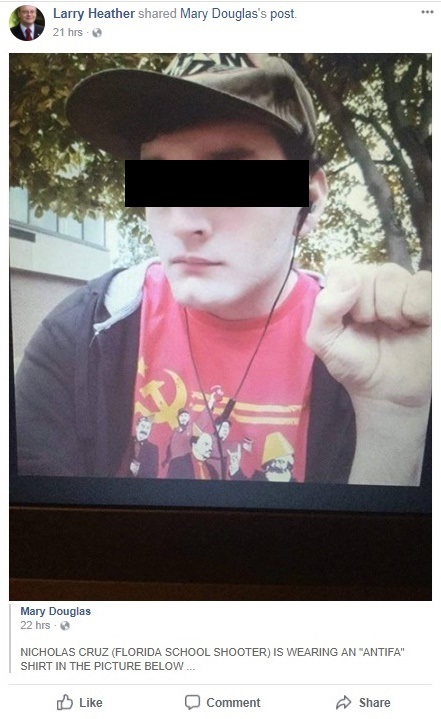 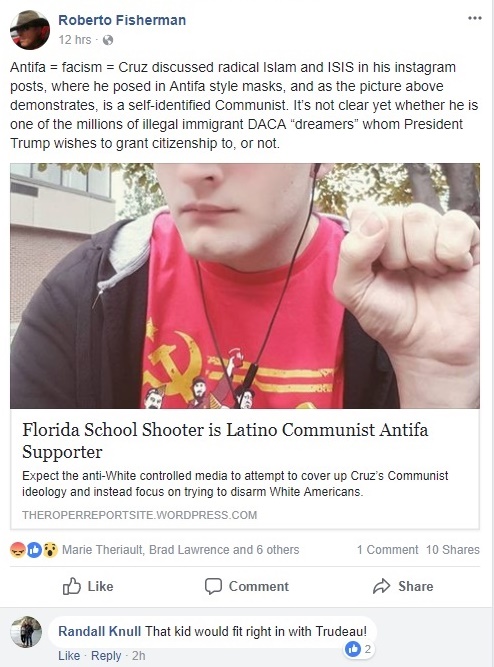 They have claimed he was a member of "antifa", the Resistance, and/or the Democratic Party: 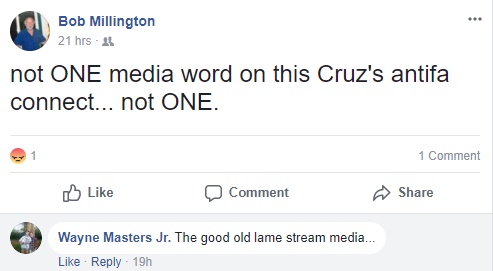 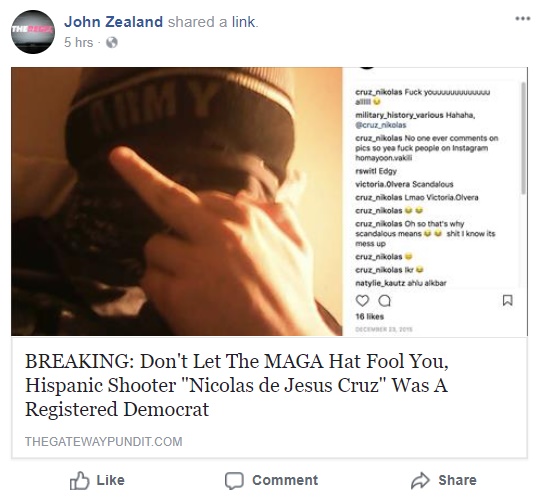 Some in the Alberta III% militia including the provincial leader are convinced that it was a "false flag".... 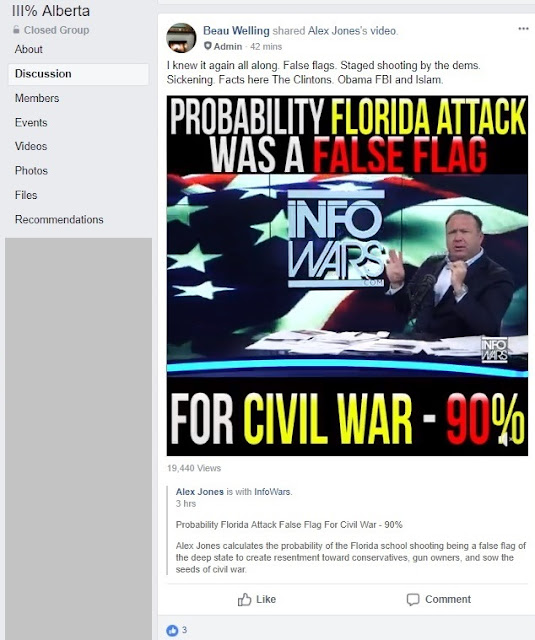 .... and that the suspect was a member of ISIS at the same time: 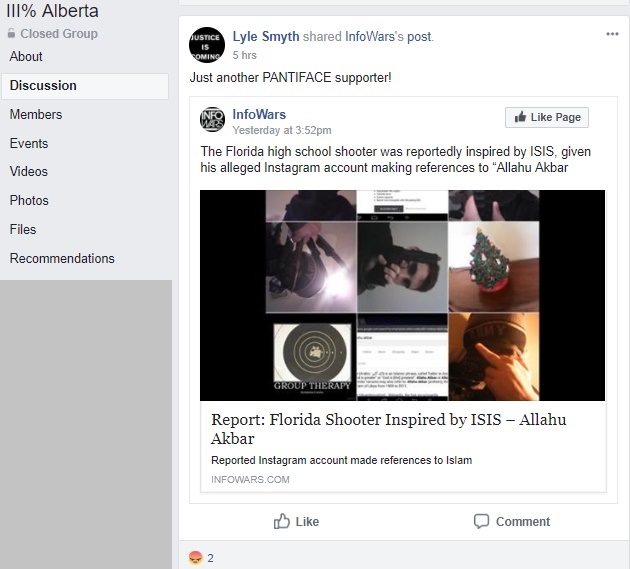 The claim that the suspect is a Muslim is making the rounds which isn't a surprise: 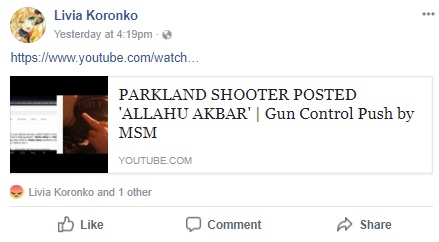 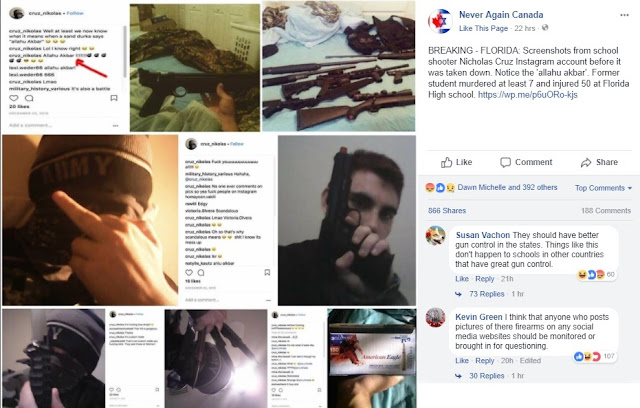 And though they point an arrow the the "allahu akbar" in the screen shot they fail to mention, even though it is actually clear in their own screen shots, that the reference is intended as an insult: 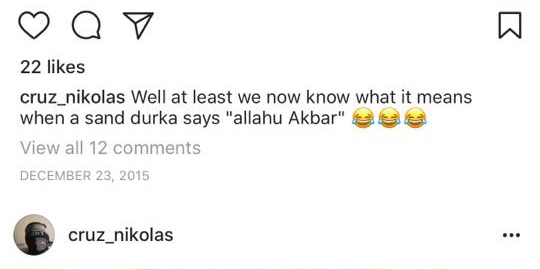 The folks on the Worldwide Coalition Against Islam page manage to combine many of these falsehoods in a single thread:

Finally there are those who are just dicks: 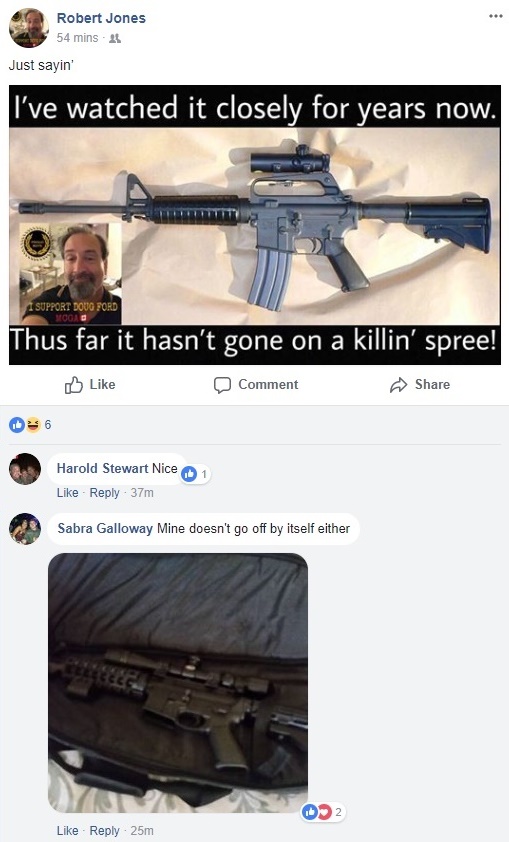 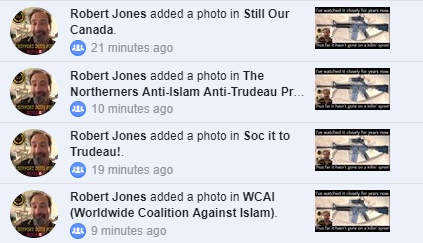 It isn't as if we haven't seen this before. We've seen it with the massacre at the Mosque in Quebec City, in Charlottesville, in Las Vegas, and a host of other incidents where a supporter of the ideology espoused by the alt-right (or whose motives, such as that of the Las Vegas mass shooting are unknown) and attribute it to their opposition. Thus the man who murdered six men in Quebec is a patsy or antifa or a cover-up for the real (read: Muslim) shooters. The murder of Heather Heyer was in reality a Democrat or actually the real victim of violence. The shooting in Las Vegas is a false flag or something else.

Never can political violence be perpetuated by one of their own because they have built a world in which the left are always the violent ones and the right perpetual victims of violence, even though the stats consistently prove otherwise.

When I think about this mindset, I can't help considering George Orwell's novel Nineteen Eighty Four:


A Party member is expected to have no private emotions and no respites from enthusiasm. He is supposed to live in a continuous frenzy of hatred of foreign enemies and internal traitors, triumph over victories, and self-abasement before the power and wisdom of the Party. The discontents produced by his bare, unsatisfying life are deliberately turned outwards and dissipated by such devices as the Two Minutes Hate, and the speculations which might possibly induce a sceptical or rebellious attitude are killed in advance by his early acquired inner discipline. The first and simplest stage in the discipline, which can be taught even to young children, is called, in Newspeak, CRIMESTOP. CRIMESTOP means the faculty of stopping short, as though by instinct, at the threshold of any dangerous thought. It includes the power of not grasping analogies, of failing to perceive logical errors, of misunderstanding the simplest arguments if they are inimical to Ingsoc, and of being bored or repelled by any train of thought which is capable of leading in a heretical direction. CRIMESTOP, in short, means protective stupidity. But stupidity is not enough. On the contrary, orthodoxy in the full sense demands a control over one’s own mental processes as complete as that of a contortionist over his body.

Put another way, it is the ability to accuse one grieving family of lying about a "false flag" that never happened....

.... while offering condolences to another grieving family for the loss of their child in the exact same incident without recognizing any logical inconsistency whatsoever:

My god these fascists are incredibly, incredibly stupid.