NOTE: If the screen shots in this article are too small to read, please right click and open in a new tab. You can then size the image appropriately. I will also be pulling data and screen shots from three distinct databases which will account for the stylistic differences of the images posted.

There was a massive leak of data last month from the now defunct Iron March forums where the violent Atomwaffen Division got it's start:
Among the members are a number of Canadians, some of whom have been featured on ARC in the past. I'll be getting to these and the others I, YVCE, and BloodRayne have dug up over the course of the next weeks and months (there is a hell of a lot to dig through) but one new figure has caught my attention as especially significant.

Before I get to him though, I need provide some context and briefly discuss a figure whom we are already familiar with: 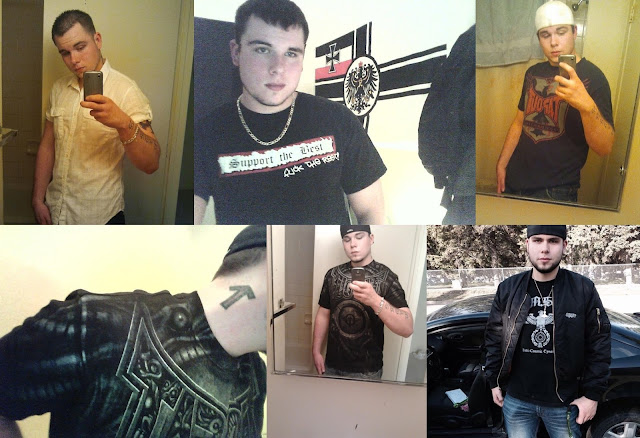 Bernie Miller was the person who led the Edmonton chapter of Blood & Honour when it was active in the city. At the time the overall organization was led by Calgary-based Kyle McKee who founded the Aryan Guard in 2006 before "patching over" to Blood & Honour a few years later. Miller was an active member prior to and during the patching over to a hate group which is has now been designated as a terrorist group by the Canadian government: 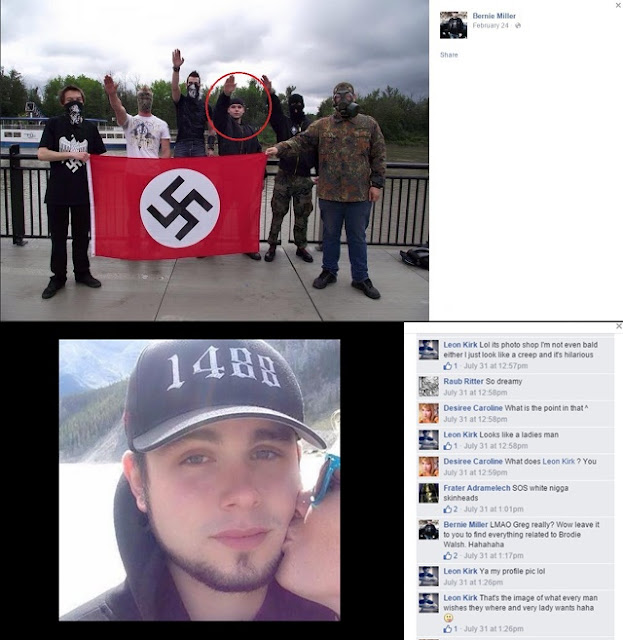 So when I saw his name associated with the leaked Iron March files, I wasn't at all surprised:

Miller alludes his time with B&H in his introduction: 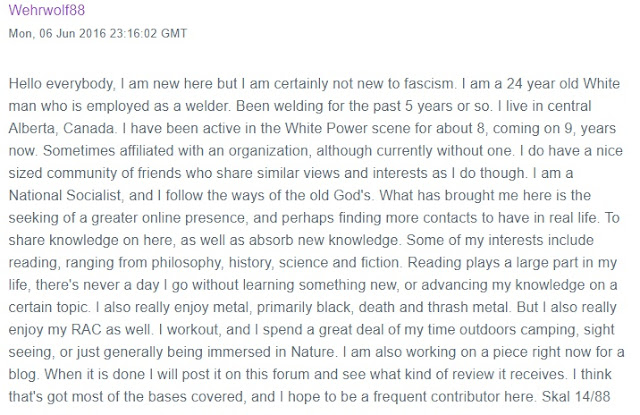 Miller, who has since moved from Alberta to British Columbia, wasn't especially active on the Iron March forums, posting sporadically between June 6, 2016 and March 9, 2017. However while his public messages were fairly boilerplate for your basic neo-Nazi bonehead, the private messages were most enlightening.

What do we know about MOONLORD?


Well on the Internet Database version of the Iron March forums, he went by the name "Николајевић" which is Nikolajević using the Latin alphabet and was mentioned in a VICE article written by Ben Makuch and Mack Lamoureux:


In a 2015 post one user with the name “Nikolajević” (written in Serbian cyrillic), who brags about carrying knives to stab “commies” and advises others to track leftist protesters to their homes, claims to be a member of the Canadian military.

“Recently, I joined the military here,” he says.
....
Months later, in 2016, Nikolajević goes onto encourage other Canadian members of the site to join the reserves, “its fun, volunteer-only for deployments and they give you a solid 8K to get yourself educated.”

There is a discrepancy with the names which is due to the fact that when he became a moderator his handle was changed from Николајевић to MOONLORD:


As one of the forum's moderators MOONLORD was referred to as Niko by other moderators. MOONLORD also sent a PM stating that his Wire handle was nik1991 suggesting be might have been born in that year. He was also at one time a member of the Calgary chapter of Blood & Honour. In fact MOONLORD was a little more detailed about his time with the Calgary chapter of Blood & Honour when he introduced himself. Here for example we see that for a time MOONLORD was an integral part of the hate group as he claims to be the primary developer of the Blood & Honour Canada website:

MOONLORD was significantly more active on the forums. Here he gives advice to this British Columbia high school student who wants to, "stop leftists at [his] school": 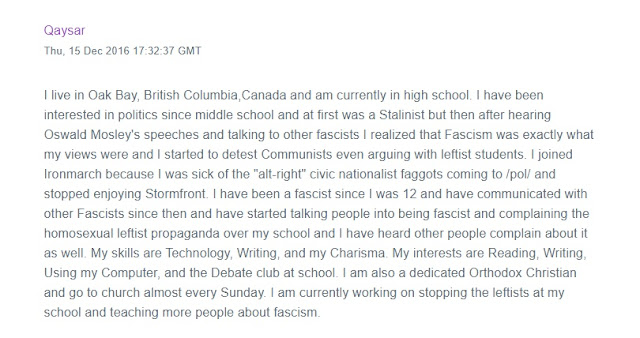 But back to the private messages where we learn more about MOONLORD. Here MOONLORD interacts with Bernie "Wehrwolf88" Miller reminiscing about their time with the Alberta Blood & Honour. It is also here that we learn that MOONLORD is (or at least was as of November 2017 as we'll see) an active member of the Canadian Armed Forces: 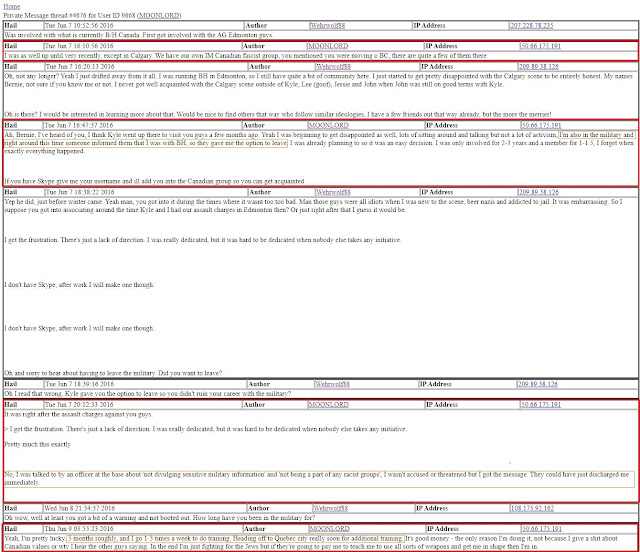 In later private messages with another user, he states that he left B&H in part because it had become less violent:

But in this case a lengthy discussion of MOONLORD's B&H membership is actually burying the lede so let's get back to his military experience.

MOONLORD discusses the finer points of his enlistment in the Canadian Forces with an American who is apparently also interested in joining his nation's military -- in his case the navy perhaps -- while also engaging in some online commerce: 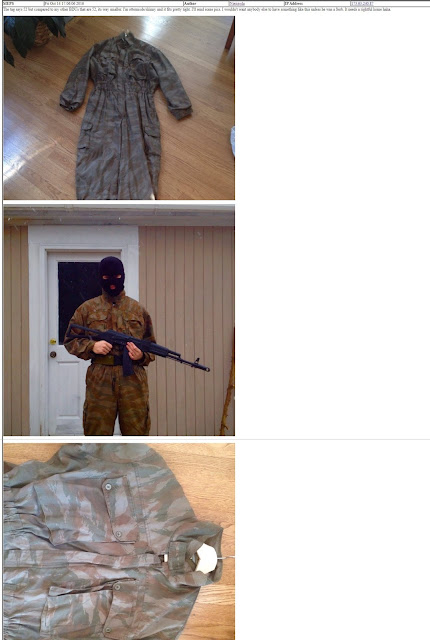 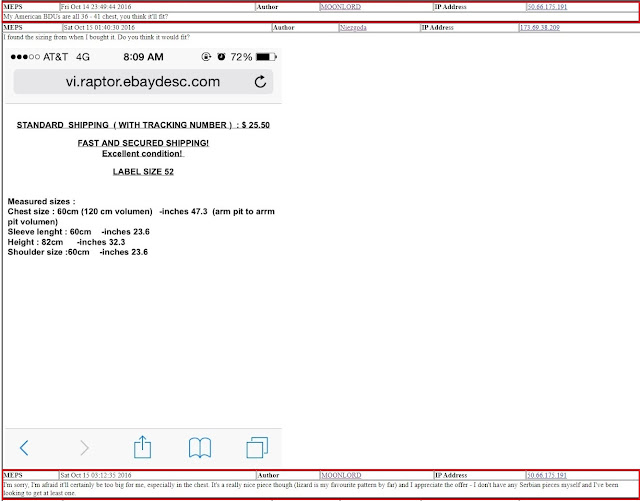 It is now that it might be best to just get to the point:

The preceding screenshots are the public forum posts of a French fascist using the name FrenchSoldier. In a private exchange between himself and the French extremist, MOONLORD appears to be in the process of selling illegal weapons to a man who doesn't care about the legality of the exchange: "if I can have such materials, the future of France will be changed":

In May 2017, Devon Arthurs is alleged to have murdered two of his room mates; another room mate Brandon Russell would later be convicted of possessing bomb making materials and sentenced to five years in prison. All of those involved were members of Atomwaffen Division. In fact Russell was the primary recruiter for the violent hate group and posted on Iron March as "Odin". As "Odin" Russell will be featured in efforts to recruit Canadian users. After the events of March 2017 MOONLORD had to admonish an unknown user who mentioned Odin in a thread and was taking his own precautions due to his association with the group:

In the meantime the arms sale discussion continues including an acknowledgement that if caught, he could end up in prison:

This is where the conversation ends. I don't know if the arms transaction discussion continued in a more secure location online (Wire perhaps?) or if the transfer of the weapons took place. However it is clear that this was not a case of Internet warriors fantasizing about acquiring weapons to start off a race war. Here we have a member of the Canadian Armed Forces facilitating the illegal sale of weaponry to someone he knew was likely to use them in a manner that would result in injuries and deaths. We also know based on some of MOONLORD's other PMs that this was a feature and not a bug:

With this in mind then it might also be a concern that MOONLORD spent a great deal of time online trying to organize what is euphemistically referred to as a private military company but, when stripped to the core is a paramilitary group of mercenaries. In fact MOONLORD is quite explicit that the pmc he is envisioning will be fascist in nature: 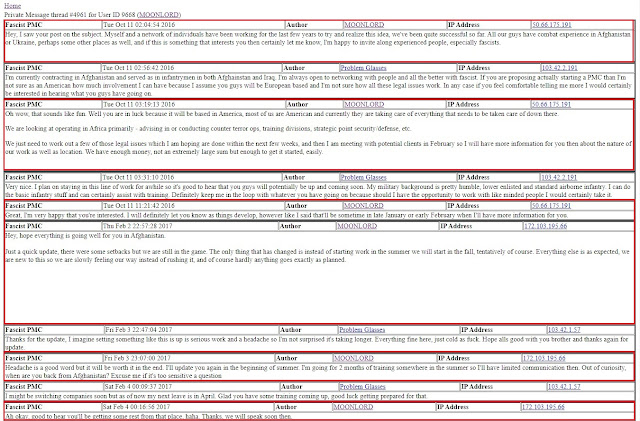 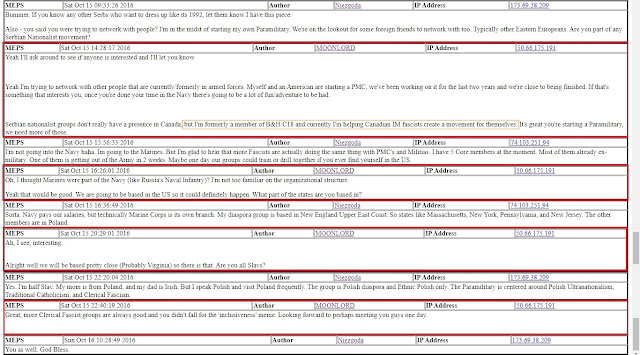 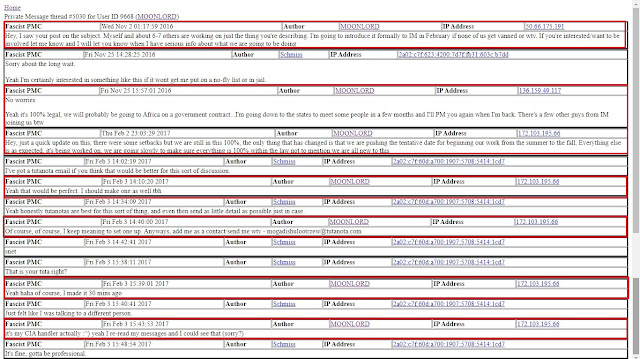 There's also an effort to recruit members of the neo-Nazi Azov Battalion:

Ultimately it appears that he wasn't able to get the project off the ground though he remained open to the possibility of trying again at another date. He also mentions another project producing military patches and other gear which we would be very interested in learning more about:

We are still in the process of gathering information however there is likely enough identifying biographical material that would enable the Department of National Defence to ferret out MOONLORD.