The Far-Right and the Power of Uncritical Thinking

The power of holding two contradictory beliefs in one’s mind simultaneously, and accepting both of them … To tell deliberate lies while genuinely believing in them, to forget any fact that has become inconvenient, and then, when it becomes necessary again, to draw it back from oblivion for just so long as it is needed, to deny the existence of objective reality and all the while to take account of the reality which one denies – all this is indispensably necessary. Even in using the word doublethink it is necessary to exercise doublethink. For by using the word one admits that one is tampering with reality; by a fresh act of doublethink one erases this knowledge; and so on indefinitely, with the lie always one leap ahead of the truth.

The writers of this blog have been aware of Tom Quiggin for quite a while though we haven't written much about him. However given that his views are frequently shared by the Islamophobes and other far-right groups we follow to justify their hatred and acceptance of laughable conspiracy theories, perhaps we should spend more time examining him: 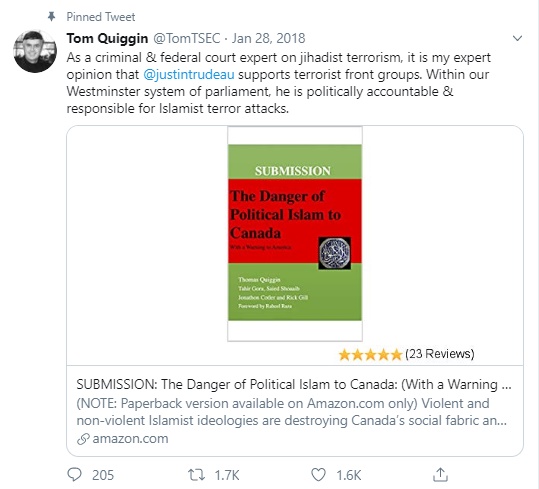 For the past few years Quiggin has been the go-to "expert" for right-wing think tanks and news outlets on all things Islamic terrorism related, or at least what he claims to be terrorist related. His association with the Manning Centre and the Postmedia Network chain of newspapers is based on his expertise and he in turn has used his association with the Manning Centre and Postmedia as proof of his expertise.

Well, perhaps that's not entirely fair. He has also claimed to be recognized as an expert on terrorism by the Ontario Superior Court and the Federal Court of Canada, though I'm not sure if he has provided evidence to support this assertion. Quiggin has also suggested his testimony before the parliamentary committee hearing on Bill C-51 qualifies him as an expert, though this sounds far less impressive when one learns that anyone can submit a brief to a parliamentary committee and be called as a witness. Hell, if there were a parliamentary committee focused on the dangers of far-right groups and I submitted a brief, I could (and probably would) be called as a witness before said committee as well.

Then there's the issue that his work is all self-published, is not peer reviewed, and jumps to rather wild conclusions based on apparently shoddy research. I'm certainly not the only one to comment on this:

Finally, I can't say that Mr. Quiggin's LinkedIn profile offers a lot in the way of providing confidence in his bona fides: 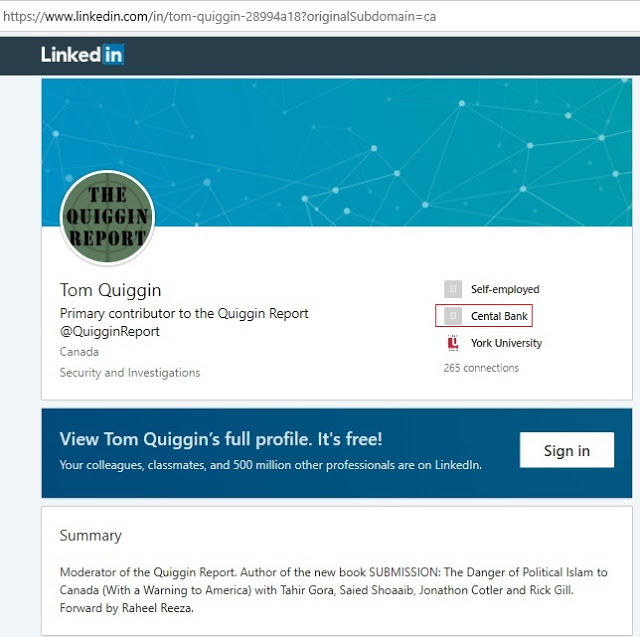 Now I'm not one to talk about spelling and grammar, but dude, this is essentially your online resume!  Have some pride!

Be that as it may, because of his own grandstanding and because of the promotion of his work by right-wing think tanks and media outlets, Mr. Quiggin's views have found a fertile home in the world of the far-right groups this blog monitors since the narrative of both Quiggin and these groups of a Muslim Brotherhood plot (starting in the 1940s and 50s) to take over Canada are copacetic. Quiggin, along with Spencer Fernando, are probably among the most widely shared propagandists in the far-right social media echo chamber today.

Prior to and during the election campaign that ultimately resulted in a minority Liberal government, Conservative Party leader Andrew Scheer was the focus of criticism for his socially conservative views. Included among those criticisms were his past comments on same sex marriage as well as his refusal to march in Pride events as other political leaders have.

Tom Quiggin, increasingly transparent as a conservative (small "c" as he looks to be very much a PPC supporter) partisan however thought he had a solution to shame at least the Liberal Party whose members were critical of Scheer's stance: 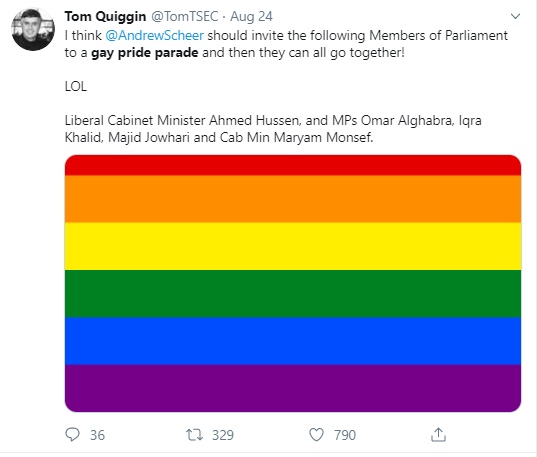 If one reads any of the work of Tom Quiggin one will notice that there isn't a great deal of nuance. In general he views Islam in Canada and the world as a monolith and the most hardline, conservative, viewpoint is what the "true" Islam really is. As such since the conservative Islamic view of homosexuality is negative, he appears to believe that all Muslims hold this view as well. It is interesting that many conservative Christians, particularly evangelicals, hold similar views on homosexuality as conservative Muslims do, but Quiggin does not treat Christians as a monolith and allows for a great deal of diversity in political and social views which is a courtesy he doesn't allow for Muslims.

As such these Liberal caucus members, all Muslims, would never attend a Pride parade according to Quiggin. The only proof he needs for suggesting this is that they are all Muslims since he is an "expert".

His supporters not surprisingly love the idea because it will really stick it to those hypocritical Libtards!

And then one has to think of the "real victims":

One however would think that a "criminal and federal court expert on jihadist terrorism" might at least be able to work the Google machine since his glib comment indicates he didn't do the appropriate research or he simply doesn't care about the truth: 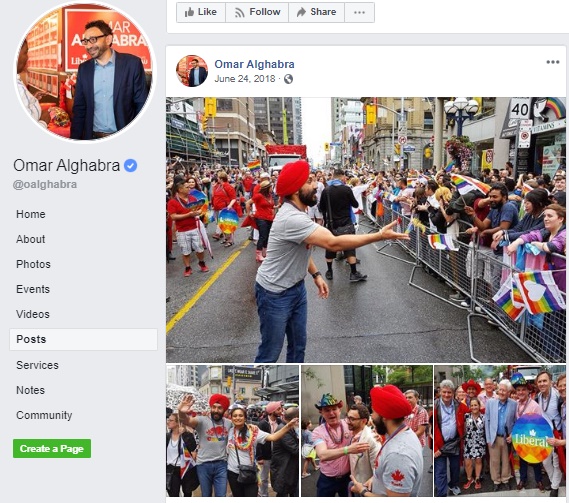 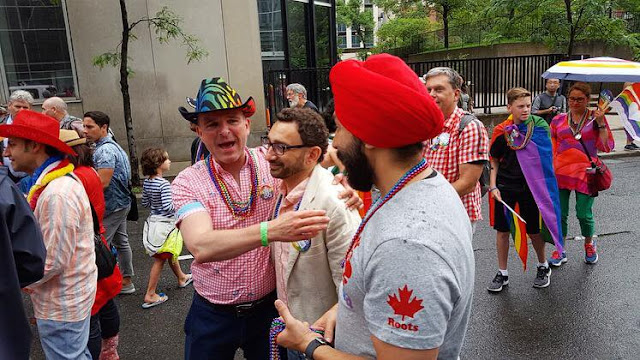 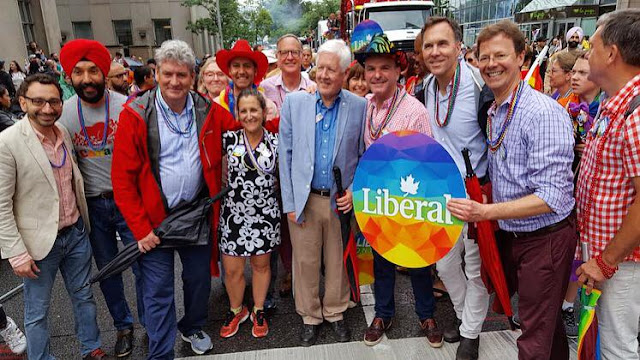 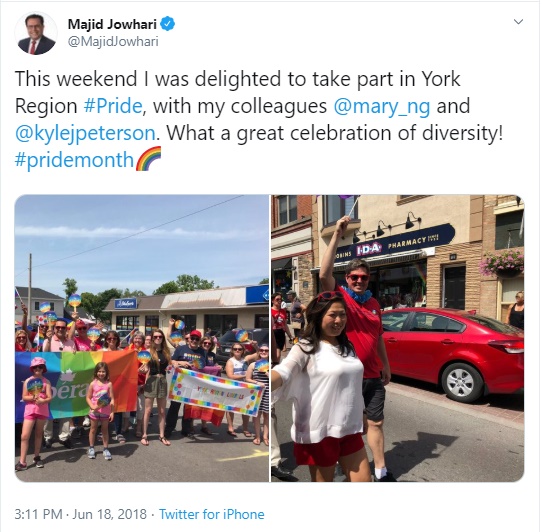 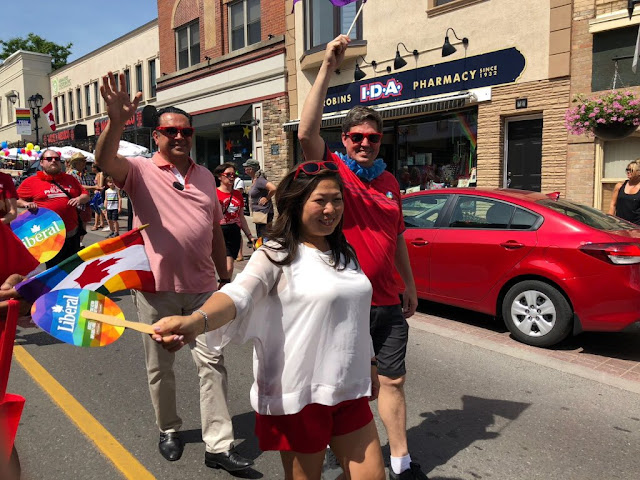 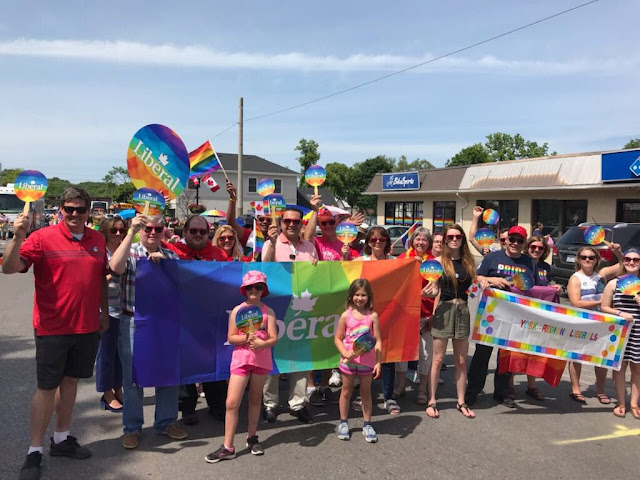 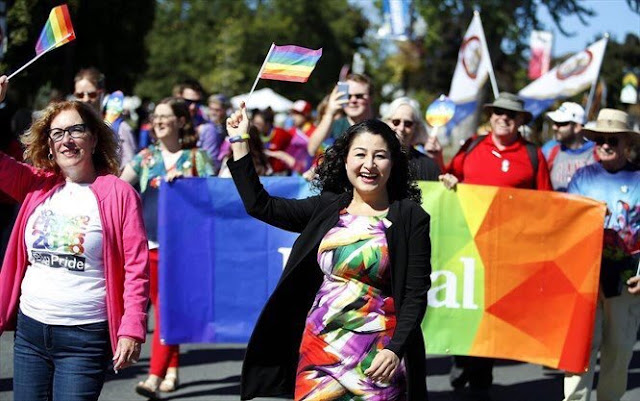 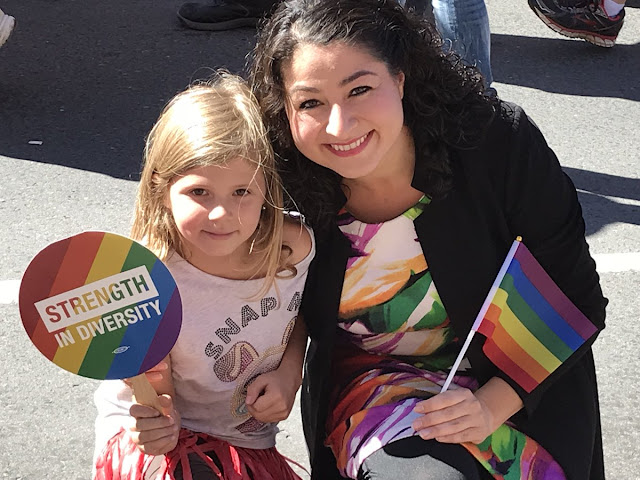 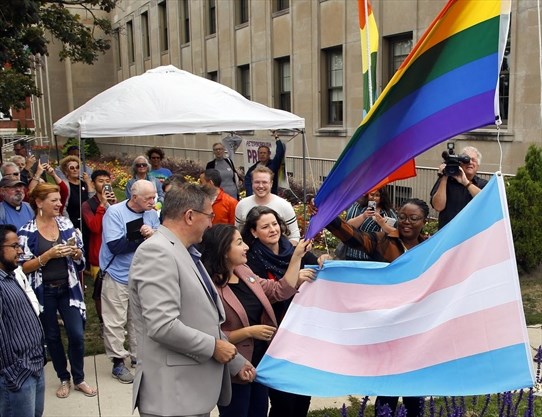 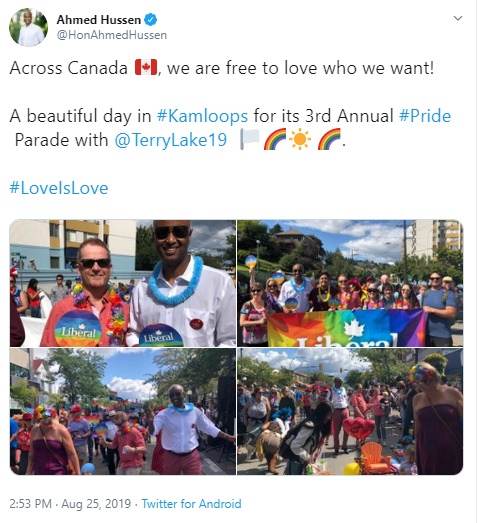 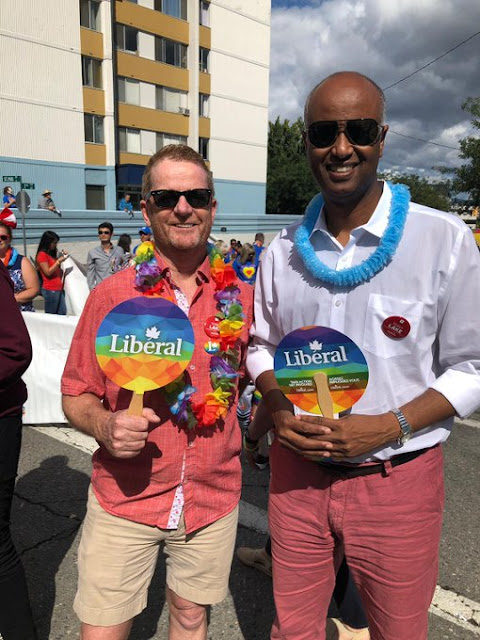 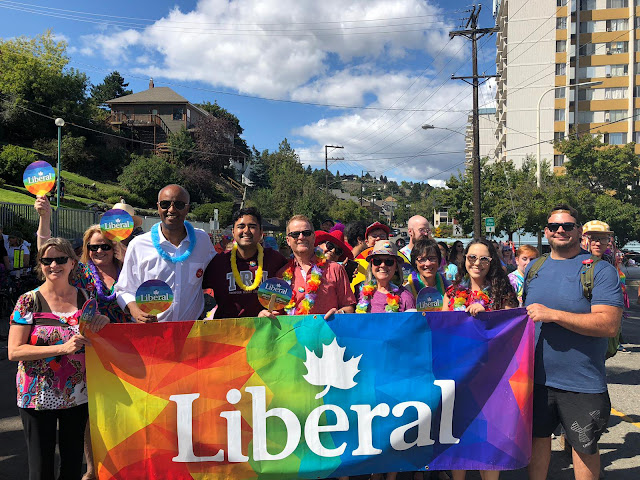 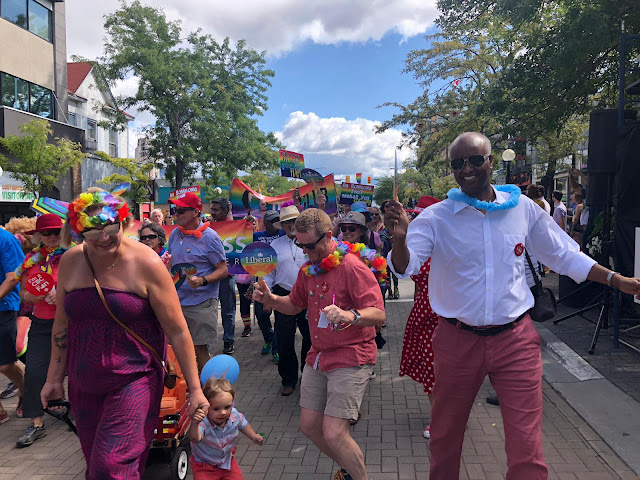 Literally took me less than a minute to find every one of these examples.

I think what Quiggin and his supporters have indicated by this brief exchange is not only how entrenched Islamophobic views are, but also the reliance on, for lack of a better word, gurus or "experts" who are able to confirm to far-right personalities what they already believe real or imagined (and it is mostly imagined). There appears no thought of doing the necessary research to either confirm or put to bed Quiggin's suggestion that the Muslim Liberal MPs would not and have not attended a Pride event due to what Quiggin erroneously believes is their adherence to Muslim Brotherhood extremism. No, he's an "expert", mostly self-proclaimed but also promoted as such by other right-wing sources, confirming their bias so he is deferred to without any question since his supporters are already inclined to believe the worst anyways.

ARC and our friends have seen this time and time again as these groups and individuals credulously disseminate conspiracy theories without any critical examination at all because they are accepted in the echo chamber:

This is still one of the most disgusting and quite frankly dangerous conspiracy theories spread by the yellow vesters. @facebook doesn't care though. #YellowVestsCanadaIsAHateGroup pic.twitter.com/34DcnkT9GL
— Yellow Vests Canada Exposed (@VestsCanada) November 2, 2019

They even have an explanation for those who might attempt to bring some sanity into the echo chamber. Should someone have attempted to show that yes, these MPs attended Pride events and that the far-right narrative is flawed, the retort will be that the MPs are actually lying and don't really support LGBTQ rights at all:

I might note here that Quiggin did not originate this particular narrative. In fact is has started up once again at the end of October: 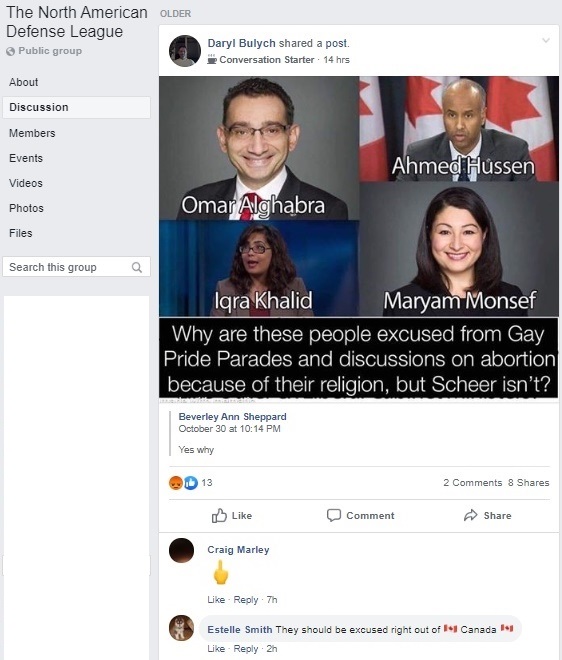 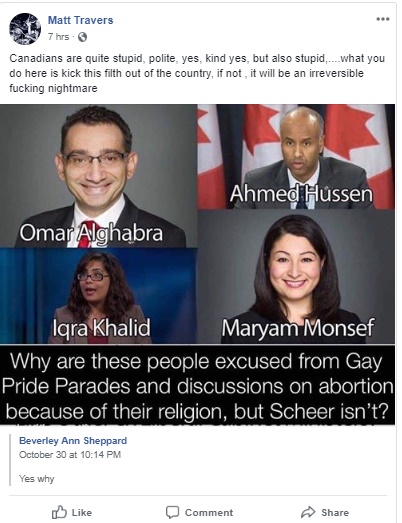 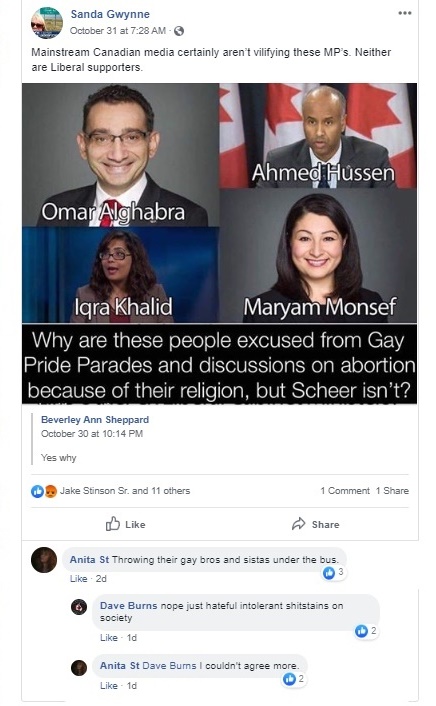 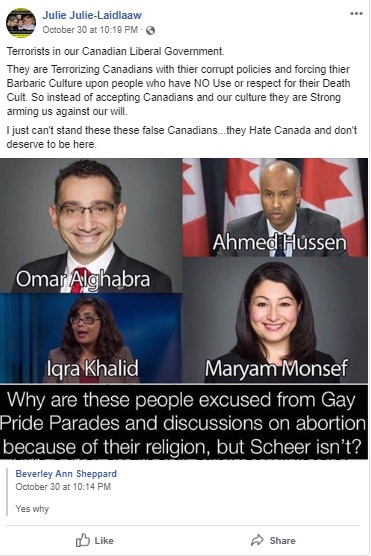 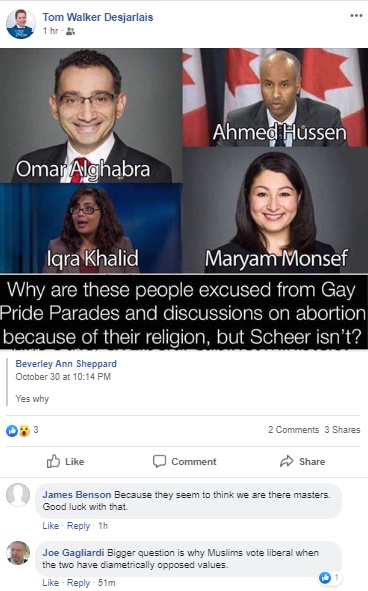 This is only one example.

We still have people pushing the conspiracy theory that two Muslims carried out the Quebec mosque massacre and not a white Quebecois radicalized by the far right; Faith Goldy, then working for Rebel Media, was amongst the first to give voice to this claim.

There are people who still believe that refugees are killing and butchering goats in Toronto hotels where they are temporarily being housed. Sue-Anne Levy (and again Faith Goldy) reported this claim uncritically which might have been a contributing factor in the attempted arson that took place later.

Whenever there is a forest fire or grass fire in Canada, you can almost guarantee that Muslim jihadists will be blamed in part because of groups such as the Cultural Action Party and NBCM Coalition News (both of which often make things up out of thin air without even a pretense of basing their claims in any sort of reality) is pushing it on Facebook.

Antifa planning on starting a civil war? There are "news" sites that have pushed that narrative.

And we haven't even started scratching the surface of the QAnon movement.

There are those liberal centrists who believe the best way to stop this is to listen to the concerns of the far-right and make them feel that they are being heard. That dialogue and engagement should be the means of healing the partisan divide.

Tell me, just how does one engage in dialogue when one group exists in an alternative universe where truth is malleable and always shaped to fit their world view despite all the evidence to the contrary? How do you find common ground with someone who hates you and would like to see you at best driven from the country and at worst executed? How do you engage with someone who believes you are a liar, have always been a liar, always will be a liar, and there is not a thing you can do or say to change their mind about you?
Posted by Nosferatu200 at 18:35