I created the blog in November 2007 in large part to monitor the Aryan Guard, a Calgary-based hate group founded by Kyle McKee that I saw as having an incredible potential for violence. Eventually the Aryan Guard "patched over" to become Canada's first official (though there had been individuals affiliated long before) branch of the Combat aligned Blood & Honour. 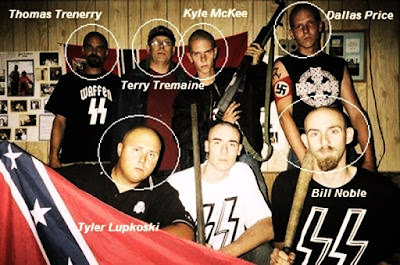 As both the Aryan Guard and Blood & Honour, this hate group was implicated in numerous assaults, arson, a pipe bomb, weapons charges, uttering threats, and attempted murder. Two former members who created the rival WEB were later charged and convicted of murder. Another Blood & Honour group aligned with Volksfront was also implicated in a number of assaults. 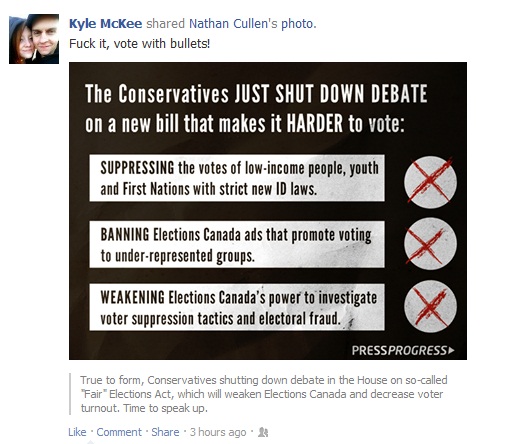 My primary goal had been to warn people about this group. Though I've certainly expanded the scope of the blog significantly since its original creation, I've tried as best I could to keep tabs on the members and supporters of Blood & Honour as they became much more discreet online but no less dangerous in the real world.

As such, I view news as a significant event in the effort to combat hate:

1. Neo-Nazi groups have been placed on Canada's listed of terrorist groups for the first time. https://t.co/i97QERG0Ww
— Stewart Bell (@StewGlobal) June 26, 2019

Extreme right groups (Blood & Honour/C-18) were added to Canada's list of terrorist groups for the first time. I suppose it's fitting to announce that our (@Palgrave_) book on right-wing extremism in #Canada is set to be released in September (co-authored w/@OT_FSSH's B. Perry). pic.twitter.com/hCKrbrs7H1
— Ryan Scrivens (@R_Scrivens) June 26, 2019


I was interviewed by Vice News earlier today when the news of the designation of Blood & Honour and Combat 18 as outlawed terrorist organizations. I was asked about the activity of the group in recent years and noted that while not engaged in the overt activities of the past, it was still very much active as this 2016 screen shot indicates: 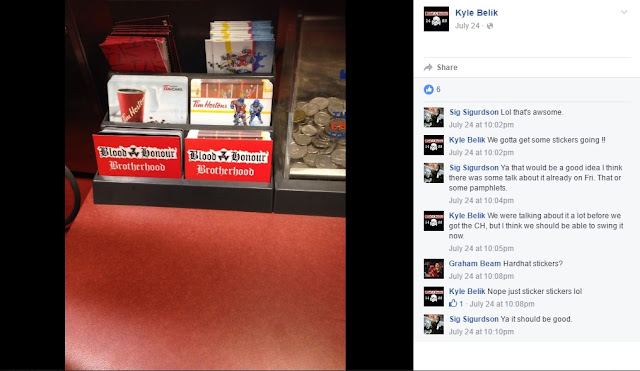 Rather than engaging in marched in Calgary or, as in the case of the last march Edmonton, the Calgary Blood & Honour instead engaged in surreptitious flyering and nearly monthly get togethers sometimes featuring guests who had been in the news: 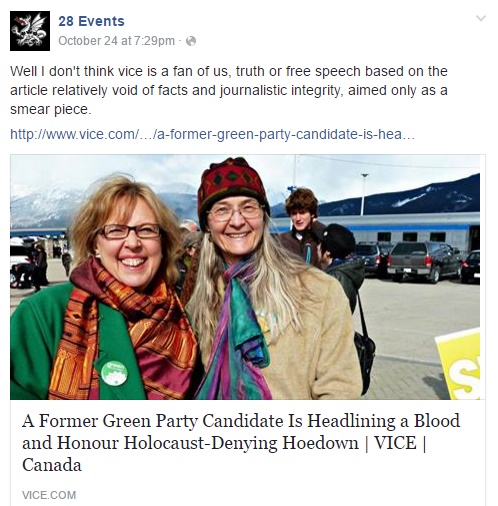 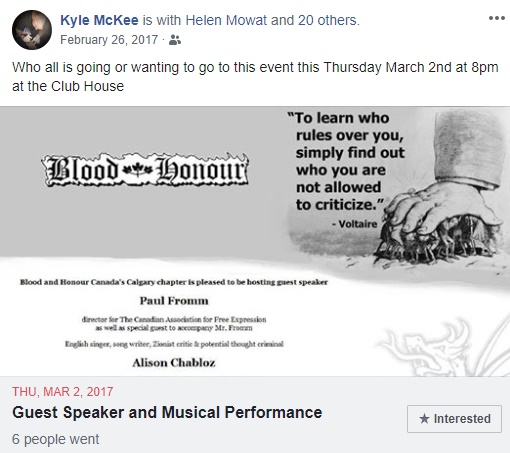 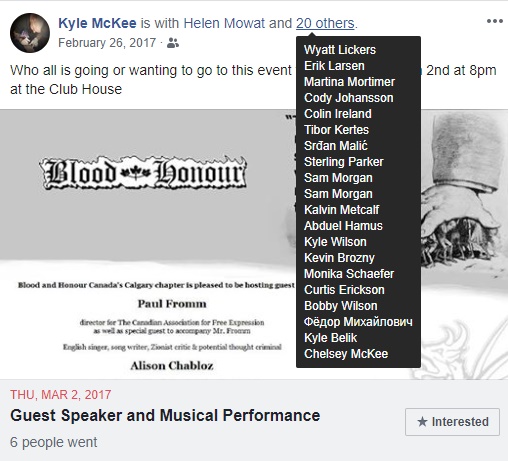 I kept track of these events and while they were reasonably good at maintaining security, their failures were duly recorded: 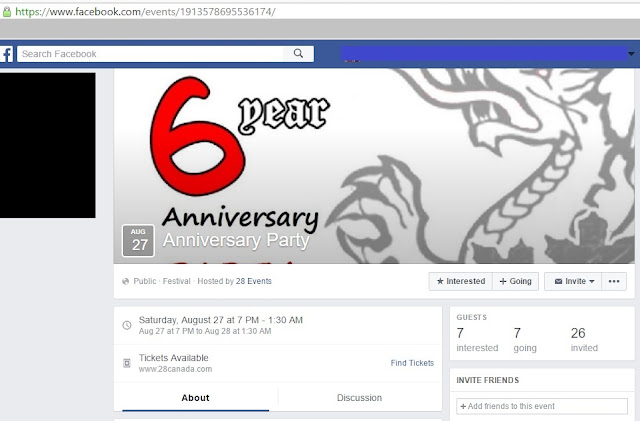 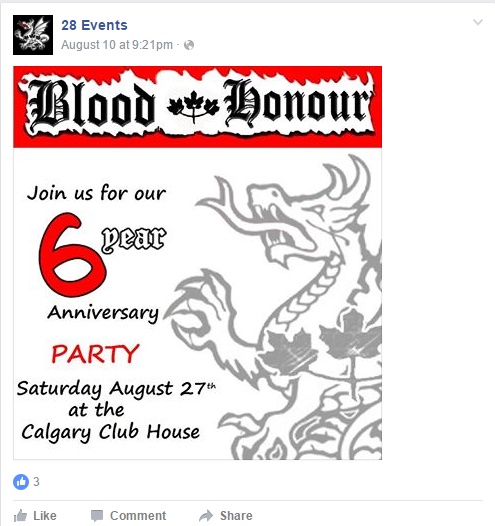 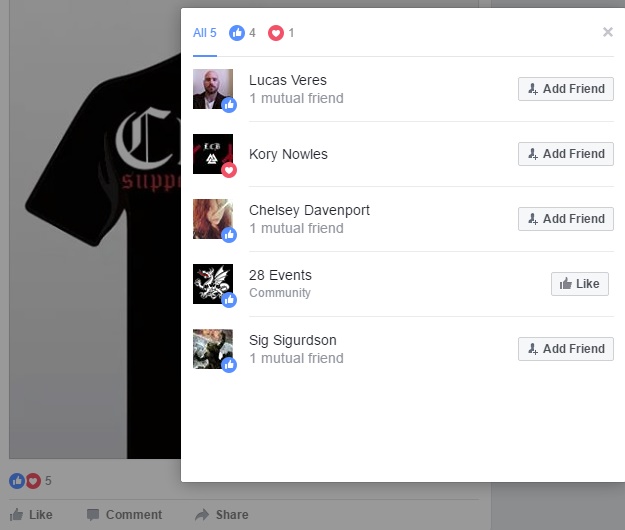 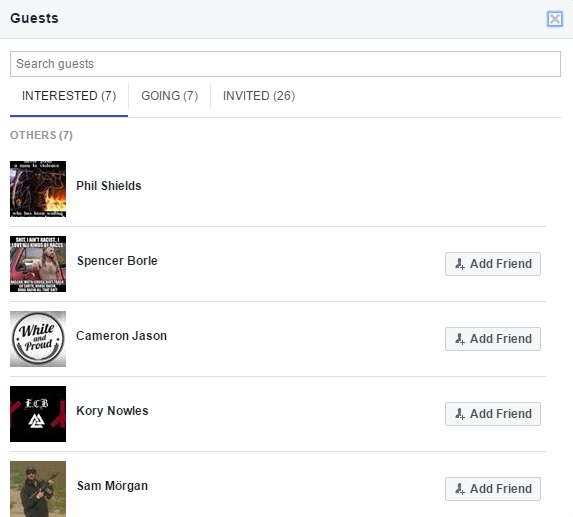 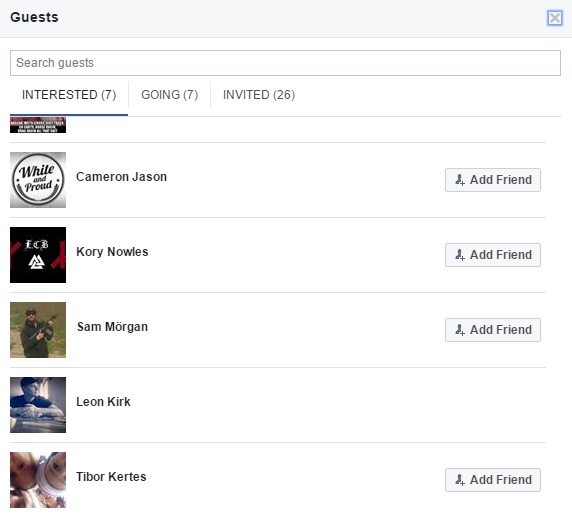 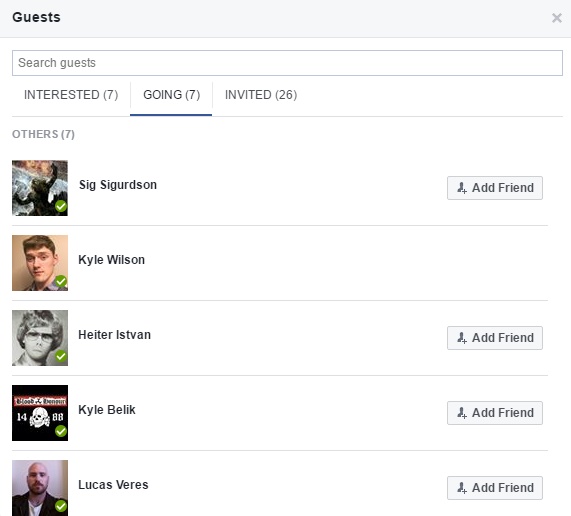 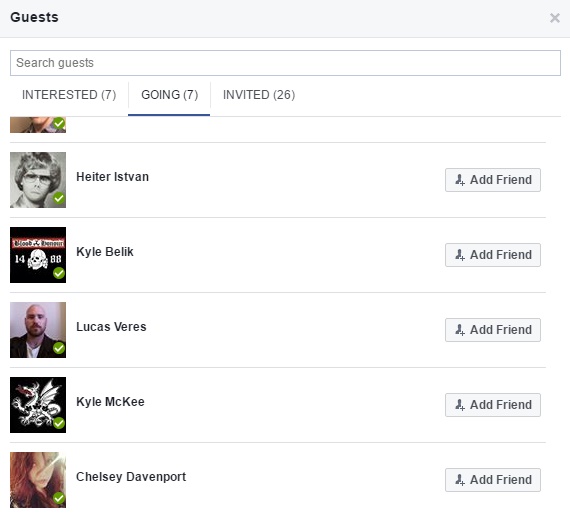 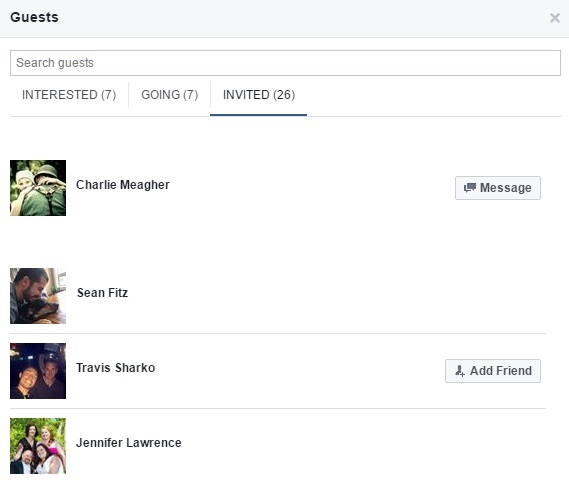 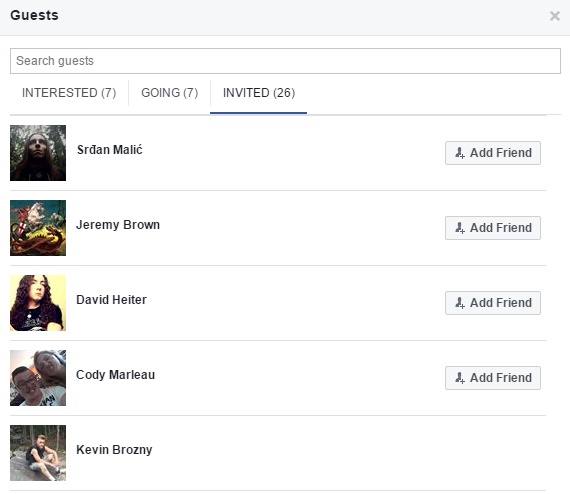 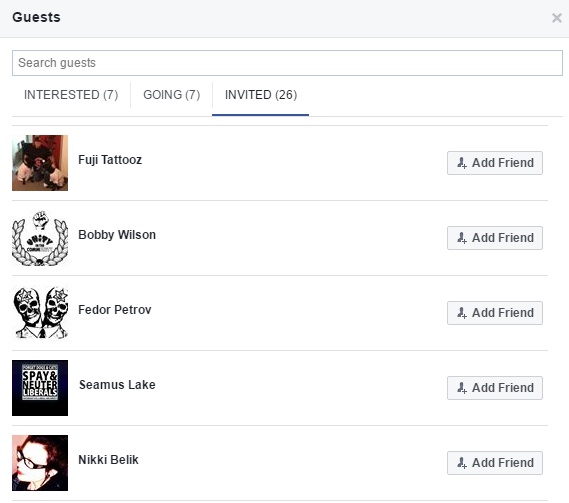 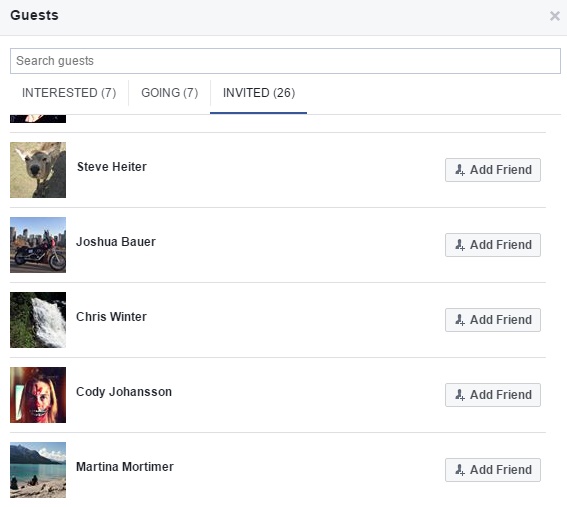 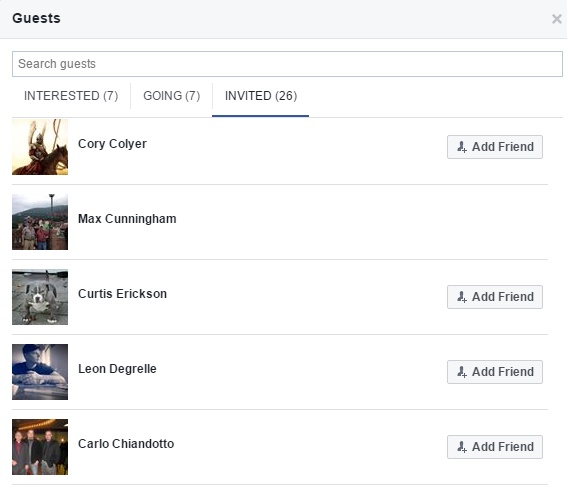 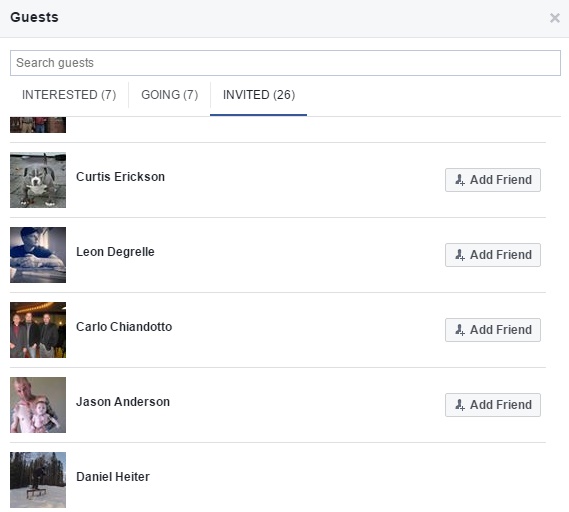 More recently, Blood & Honour has been promoting a camp out that is to take place in both Alberta and New Brunswick: 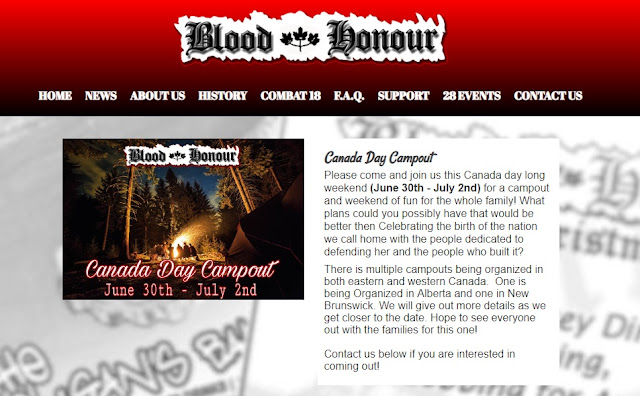 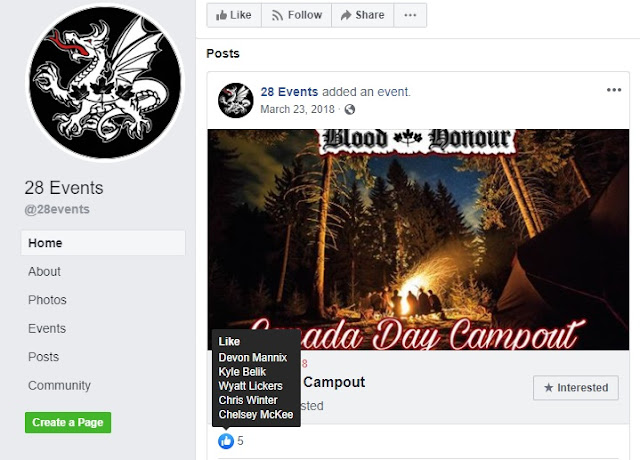 McKee himself no longer lived in Calgary. He and his partner have moved to New Brunswick where McKee now runs a tattoo business.

Based on interactions on the business' Facebook cite, he seems to be one of the go-to tattooists for members and friends of the Northern Guard in the province:

I also mentioned in the interview that as happy as I was that Blood & Honour and Combat 18 have been designated at terrorist groups, I also hope to see further scrutiny on groups such as the III% militia, Northern Guard, Proud Boys, Soldiers of Odin (or any of the other Nouns), and the Yellow Vesters which often serve as "gateway drugs" so-to-speak for entry into even more extreme groups.

On this readers need not take my word for it:

In the Iron March forums, a Blood & Honour organizer told a student on Vancouver Island in 2016, “If you really want to stop the leftists at your school you’re going to have to use more than just arguments, but at least it’ll be a permanent solution.” Thankfully it didn't happen.
— Canadian Anti-Hate Network (@antihateca) June 26, 2019


Long time readers won't be at all surprised to know that long-time figure in the hate movement Paul Fromm is a bridge between the extremist Yellow Vests and the even more extreme Blood & Honour: 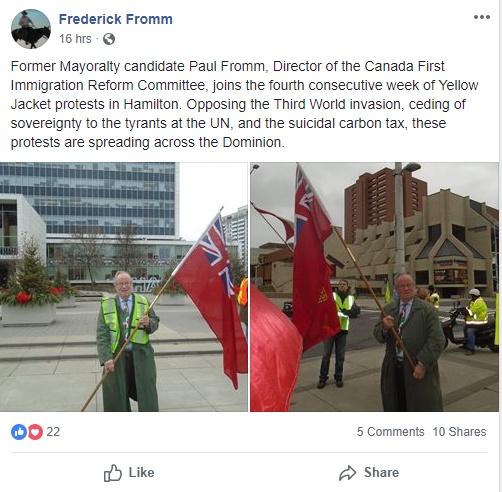 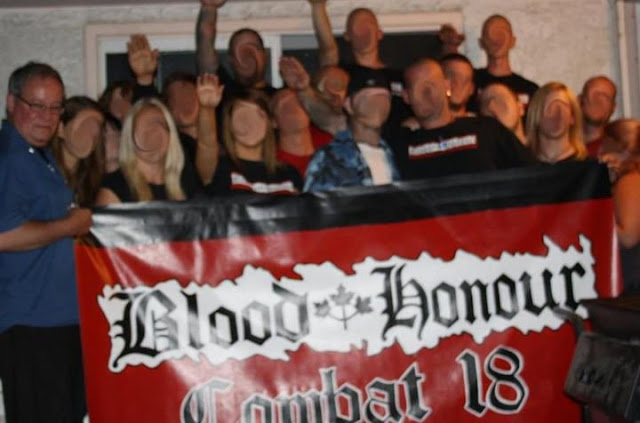