Something stinks in Barrie Ontario. In March of this year, on the International Day for the Elimination of Racial Discrimination, Barrie City Councillor, Keenan Aylwin, called out two local CPC MPs, John Brassard and Alex Nuttall, for remaining silent after Scheer spoke at United We Roll. He also pointed out that Nuttall was Facebook friends with Faith Goldy and stated that the two MPs were "playing footsie with white supremacists." They didn't take kindly to this accusation, but, instead of doing something productive, like denouncing white supremacy, they decided to sue Aylwin for defamation instead.

.@JohnBrassardCPC and @AlexNuttallMP are each suing Barrie councillor @KeenanAylwin for $100,000 for a Facebook post criticizing their silence on Andrew Scheer speaking at same event as “neo-Nazi sympathizer Faith Goldy,” and playing footsie with white supremacists. #cdnpoli 1/
— Canadian Anti-Hate Network (@antihateca) May 31, 2019

was Facebook friends with Faith Goldy before Goldy was banned from Facebook under its policy against white nationalism, which they recognize is indistinct in its expression from white supremacy. Rather than an explanation or an apology, he's suing a critic. 2/
— Canadian Anti-Hate Network (@antihateca) May 31, 2019

@AndrewScheer promised that “there is absolutely no room in . . . Canada for intolerance, racism and extremism of any kind. And the Conservative Party of Canada will always make that absolutely clear.” 3/
— Canadian Anti-Hate Network (@antihateca) May 31, 2019

Now it’s time for you, Mr. Scheer, to prove that you mean it. Condemn Faith Goldy and Yellow Vests Canada, apologize for taking so long, and tell your MPs to drop their lawsuits. Otherwise your promise is meaningless. Full post: https://t.co/s5ZmIGvD1H 4/
— Canadian Anti-Hate Network (@antihateca) May 31, 2019


I assumed Barrie city council would stand behind Aylwin, but unfortunately, I was wrong. Instead, on June 12th they voted unanimously to reprimand Aylwin, and demanded that he remove the "offending" Facebook post. As reported by Fatima Syed in the National Observer, the Integrity Commissioner had introduced a new code of conduct, and Council found Aylwin had run afoul of it "by denigrating a fellow elected official in a public forum and fail[ing] to treat him with "dignity, understanding and respect.”

As Syed's article explained, council had a tough choice to make. If they voted to reprimand their colleague, it sends a message that they are censoring criticism of dog whistle politics, but if they didn't reprimand, they would potentially be disrespecting the role of the integrity commissioner.

While I appreciate this is challenging, it is worrisome that councilors would rather repeat "He broke the code! He broke the code!" than fully consider the important issues of racism, dog whistle politics, and censorship, before making what this writer believes was a blind decision en masse.

Even after having a couple of days to consider it further, the councilors remained unmoved. On June 14th, Global News reported that they decided to uphold the reprimand. In response, Brassard opted to drop his lawsuit, stating that “I am satisfied with the findings made by Council and the Integrity Commissioner." Nuttall also dropped his suit on the same day and it seems the matter is considered closed.

Except, it is anything but. The issues that prompted Aylwin's Facebook post remain, and now there is the added concern of politicians being censored for speaking out about other elected officials. Aylwin reflected on his experience with Syed:


“I think the problem here is that there are some politicians out there that are walking a very fine line (and some would call it dog whistling), where in one breath they will denounce racism, as they should, and then in another breath will support groups like the Yellow Vest movement or United We Roll that we know are rife with white nationalist elements and hateful elements. And they fail to make the connection between the harmful views and those in those movements and the creation of an environment where violence can fester. If there’s anything we can learn from my experience, it’s that there is a great risk to calling out white supremacy in this country.”

The fine line Aylwin mentioned can come in the form of associations, dog whistling, enabling, or blatantly offensive remarks, among other things. Given that Nuttall was indeed Facebook friends with Faith Goldy while she was on that platform, more digging was in order.

Based on what I found, I have some questions.

As I don't want to get sued, I will say up front that I found no direct posting of Nuttall's that indicates beyond a doubt that he is "playing footsie with white supremacists." What I found were several troubling social media associations and potentially related concerns that should be addressed.

I'll start with the most pressing:

1. If Nuttall is concerned enough about his reputation around the issue of white supremacy to sue for defamation, why on God's green earth is he still following Faith Goldy on Twitter? 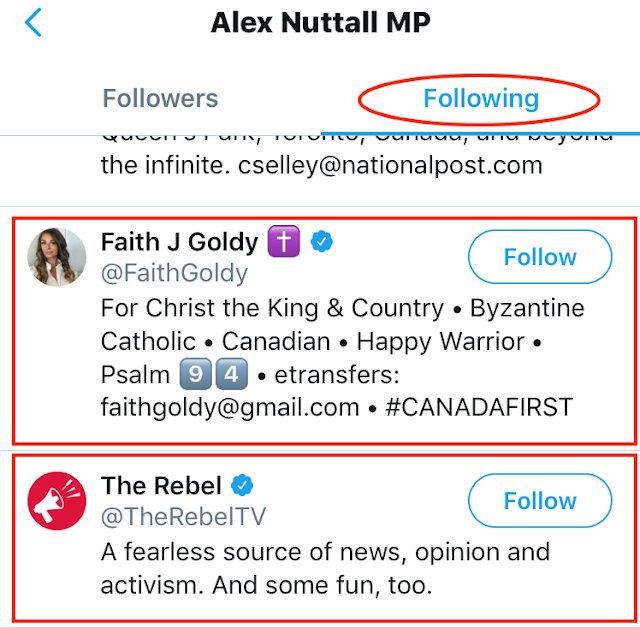 It seems like common sense that if you don't want to be accused of playing footsie with white supremacists, don't follow them or their sympathizers on social media.

This is alarming. Nuttall allows a man who was charged with a hate crime on his FB. Brassard was out on Twitter cheering on the Yellow Vest Convoy to Ottawa. The rise of white supremacy being overlooked by elected MPs is something we should all be worried about. @VestsCanada https://t.co/GZ0LXa8s7n pic.twitter.com/A5Bjio6iwO
— Aylan Couchie (@AylanX) May 23, 2019 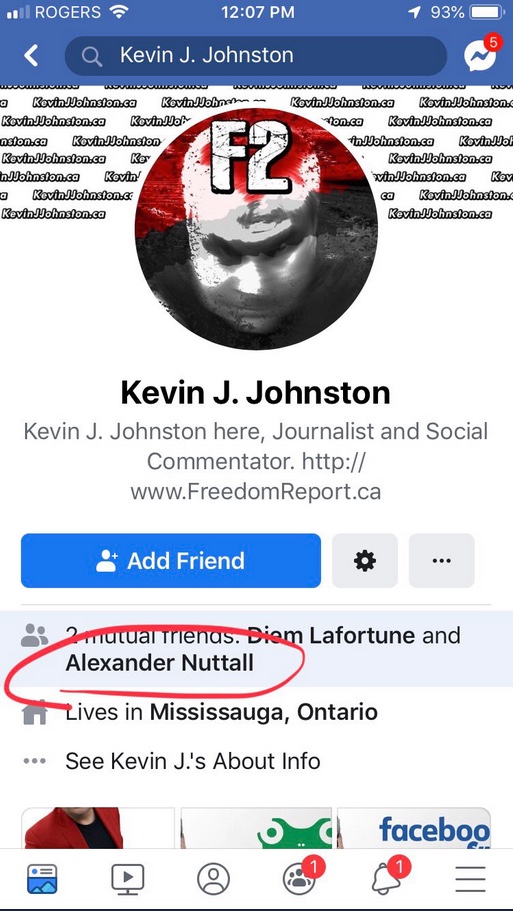 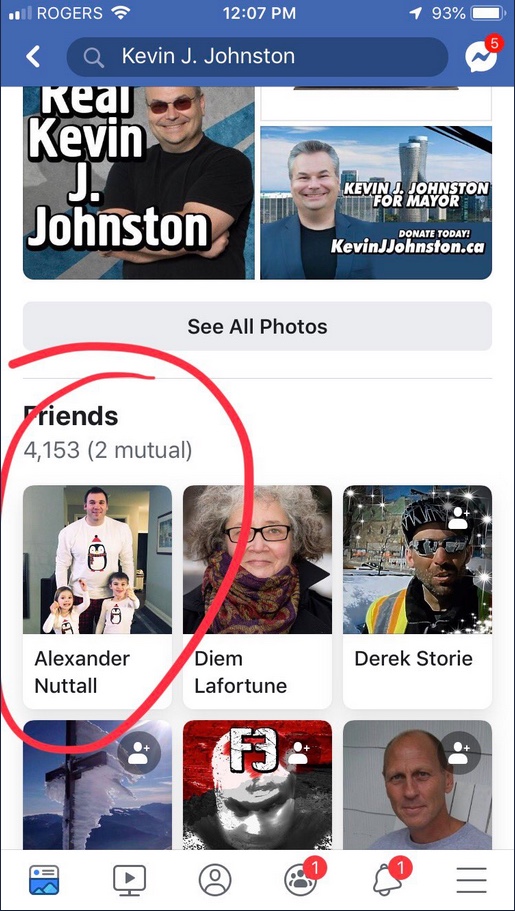 It appears that sometime since this Tweet went live on May 23rd, Nuttall unfriended Johnston.


3. While we're analyzing his friends and follows, perhaps he'd like to explain why he follows Rebel Media on Twitter (see image for question 1)? 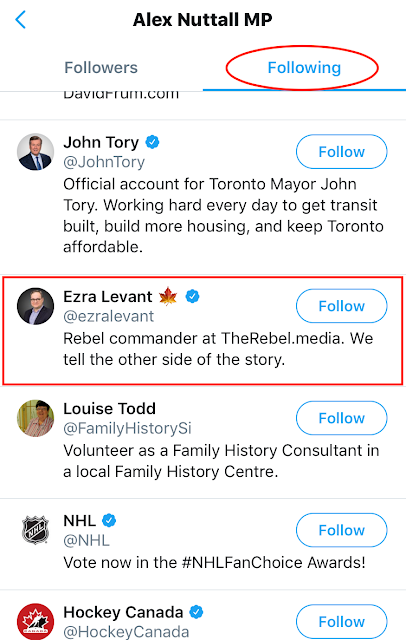 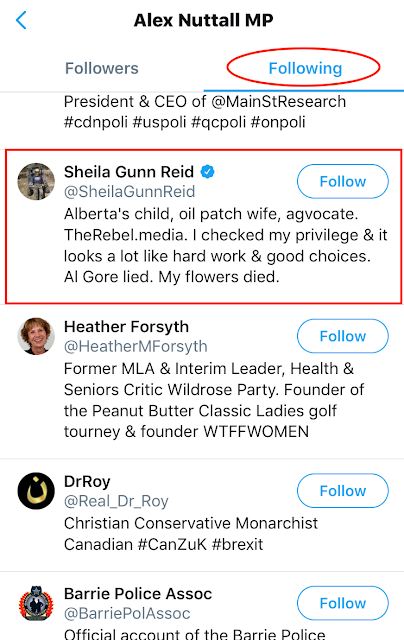 And why, after he and other CPC MPs were called out by Press Progress in August 2017 for being interviewed by Rebel Media, did he grant them another interview last year? 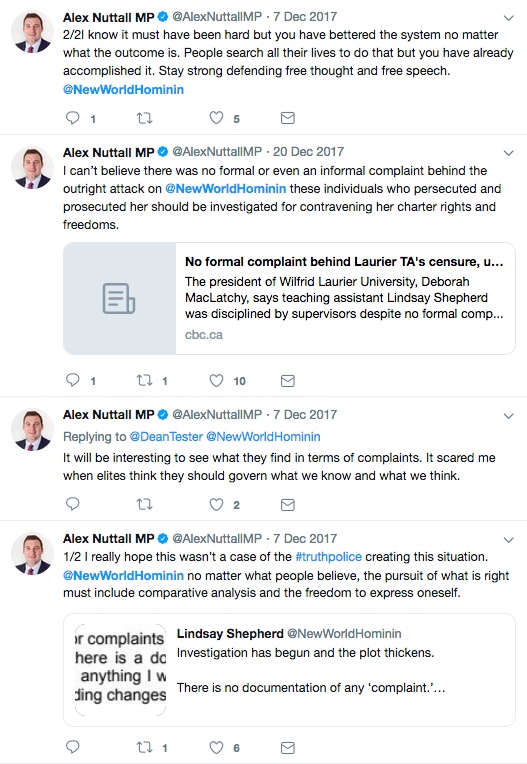 However, Shepherd's beliefs have grown more radical since then, and, as readers of this blog likely know, she supports Faith Goldy, Students for Western Civilization, and most recently, appeared on a white supremacist podcast.

Nuttall still follows Shepherd on Twitter. Does he still support her? 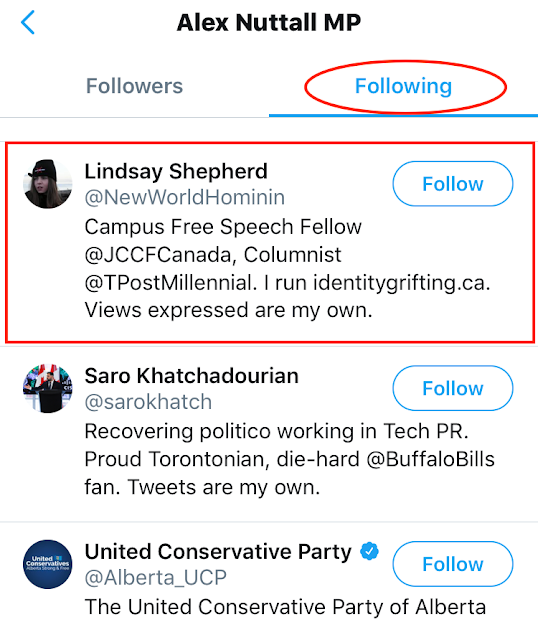 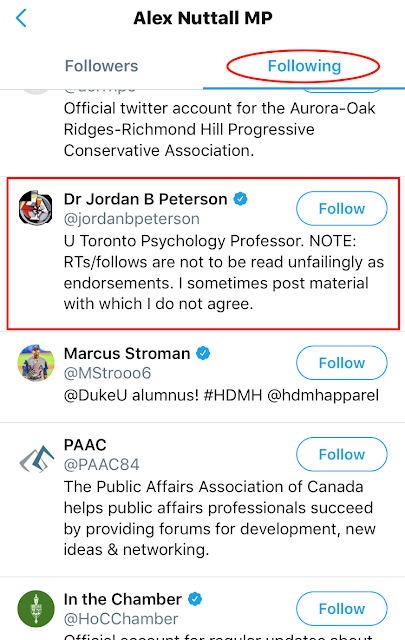 It's full of racist, homophobic, and Islamophobic posts. I'm curious whether he agree with this? 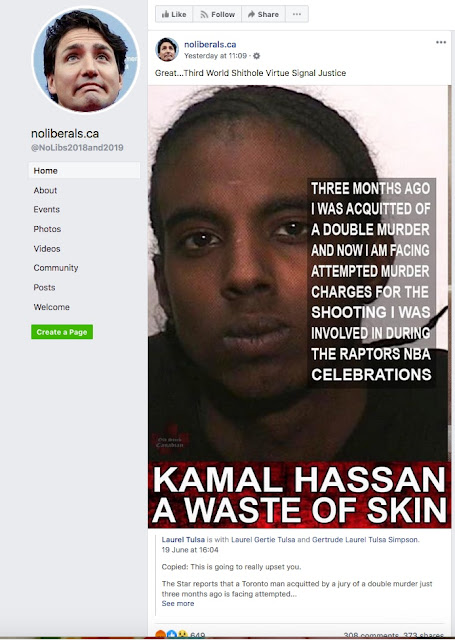 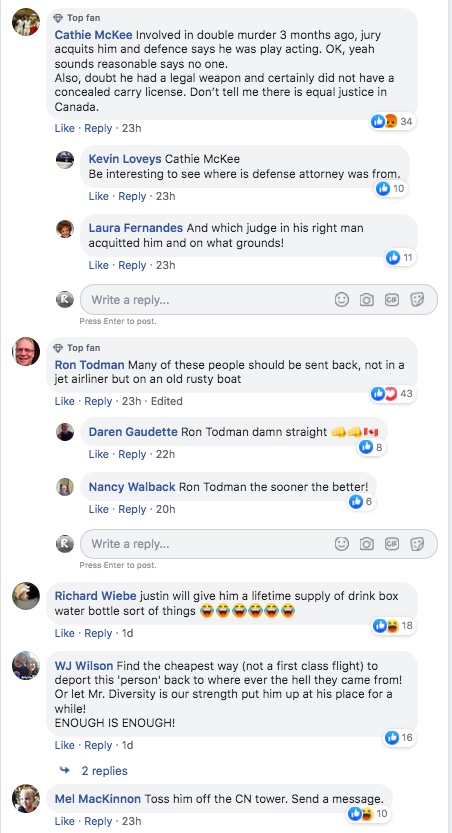 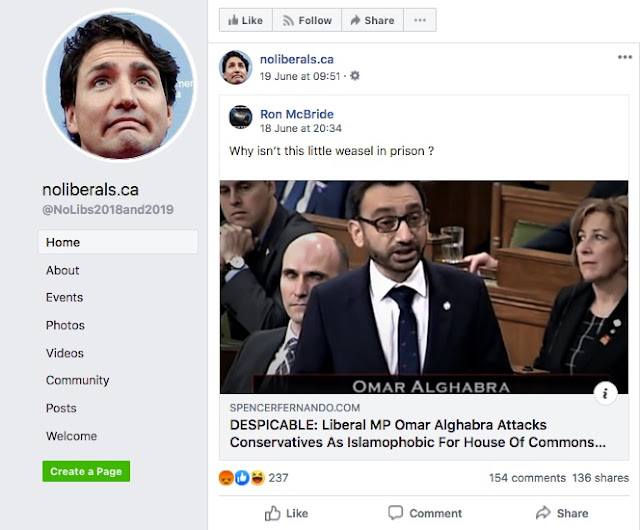 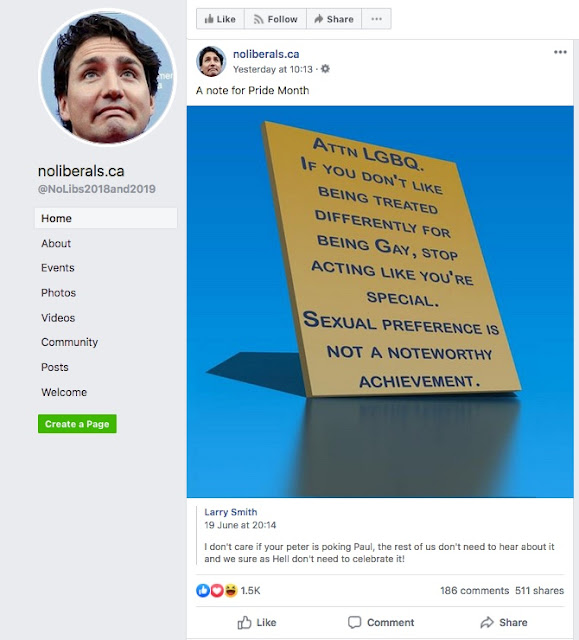 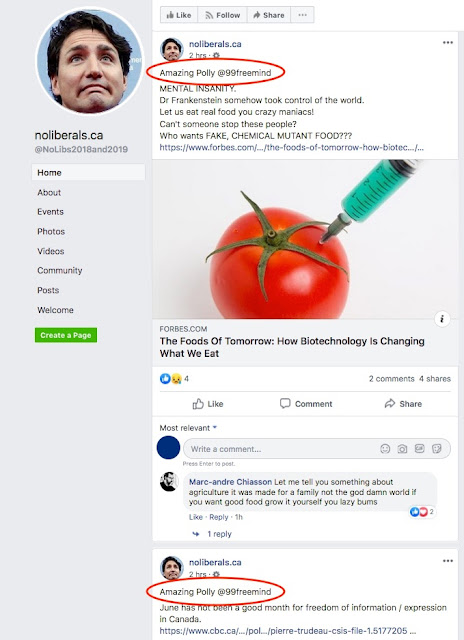 Then, there's the other anti-Trudeau Facebook page Nuttall likes:

It stays more on message, however, it does indulge in misogyny. Does Nuttall support posts like this one? 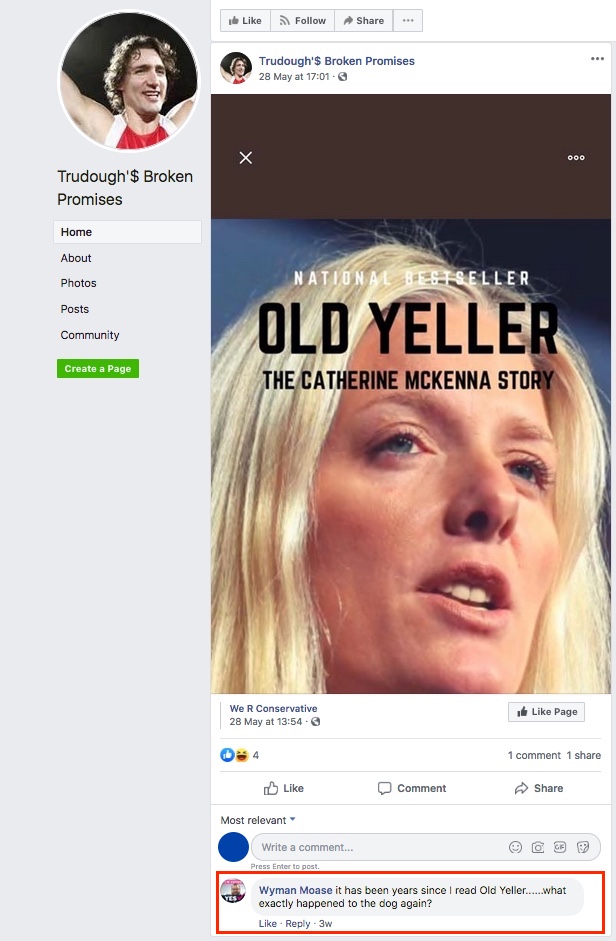 7. On a different topic, what's with the guns? 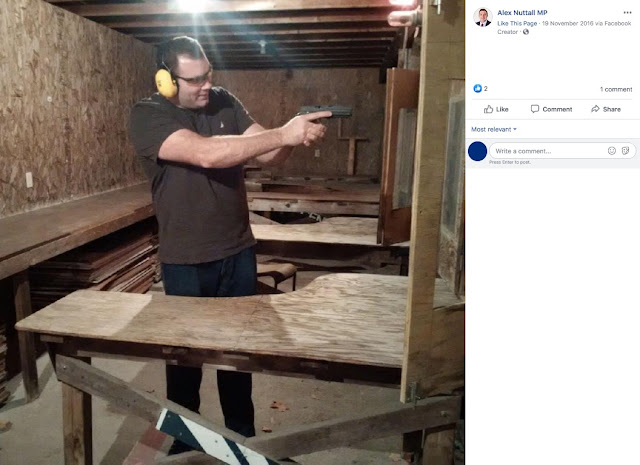 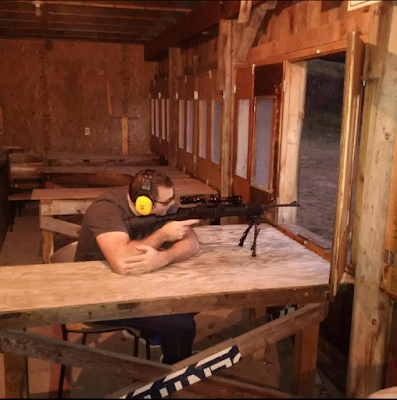 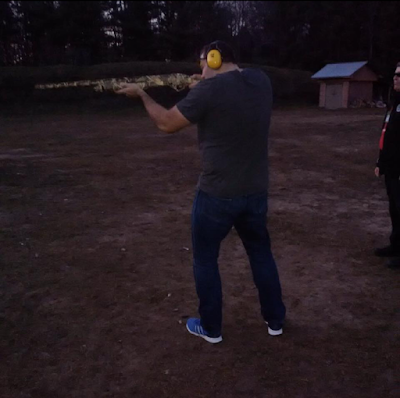 Now, in fairness, it is legal to own guns and go hunting in Canada and it is certainly legal to practice at a range. However, these photos were posted on Nuttall's professional Facebook page on November 19th 2016, seemingly without comment or context that I could find. The lack of obvious information leads to so many questions:

- Was this a one-time event?

- Does he own guns, and are they properly registered and stored?

- What was his motivation?

8. It is no secret that Nuttall worked hard on Maxime Bernier's PCP leadership campaign. He even considers Bernier a good friend: 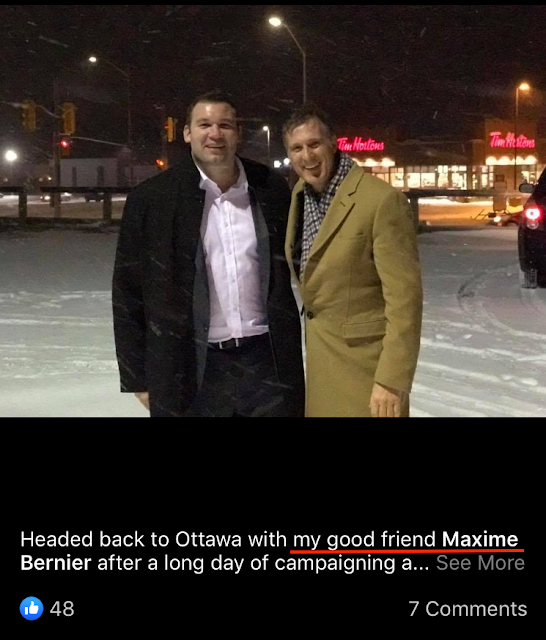 He opted not to join the PPC, which was smart. However, since he worked closely with Bernier, one has to wonder how much of his racist and conspiracy minded views was Nuttall aware of, and did he agree with any of it?

In service of these views, he retweeted former Rebel contributor Andrew Lawton, who he also follows on Twitter. This raises questions both about Nuttall's respect for women's reproductive rights, as well as his potential support of Lawton, who was called out by Press Progress for his racist, homophobic, and misogynistic ramblings in 2018. For his part, Lawton claimed mental illness as an explanation. 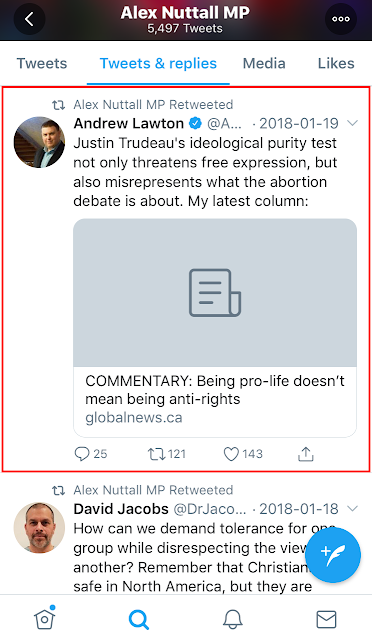 10. On March 25th 2019, Nuttall announced he will not seek reelection in October. He claimed he needs to put his family first, which is laudable if true. But one has to wonder if he's conveniently ducking out for another reason. Is there something else we don't know?

This may be coincidence, but it is curious that less than ten days after he announced his impending departure from federal politics, the PPC announced it was planning to run a candidate in Nuttall's riding of Barrie/Springwater/Oro-Medonte. Did Nuttall step aside to make way for the PPC or is he planning to run for them?
__

Elected officials have a responsibility to their constituents to respect them all as equal citizens. Given the Conservatives' ongoing problems, most recently with Michael Cooper threatening to sue The Hill Times over an op ed about his on record referencing of the Christchurch manifesto to shame a Muslim activist, no MP should leave room for any concerns about their views on equality. That Nuttall was Facebook friends with at least two white supremacists, and continues some associations on social media despite the (since dropped) defamation suit, is great cause for concern. We need to have complete confidence in all of our politicians that they will denounce racism and white supremacy whenever and wherever it occurs. Leaving questions in this regard, especially after launching a defamation suit, is disappointing to put it mildly. And to censor those in elected office at any level when they raise an objection is a dangerous precedent.
Posted by BloodRayne at 16:36