June 24 Rallies and Protests and Preview of June 25

Today two events took place at Calgary City Hall. One was held in defence of Muslim-Canadians and a multicultural society. The other was organized by former WCAI ally Stephen Garvey who, only days before, had (rightfully) labeled the WCAI a hate group but who was now outraged that the WCAI wasn't given a permit to roast a pig, have live bands, and say horrible things about Muslims and immigrants.

Yeah, I know. Looks like Garvey is trying to have his cake and eat it too.

First, the rally supporting Muslims, immigrants, and a multicultural Alberta and Canada:


The event at City Hall was very nearly without incident. Speakers were good, and diverse.

A few dudes from Street Church were snapping pics, and a few other shady fuckers were around including one dirtbag who I have tried to debate calmly in the past. He is, however, an explicit nationalist who has said flat out that he views the promotion of Islamophobia as a positive in Canada. He also says that all Muslim people are a threat, and that white people civilized the First Nations and that they were right in taking this land because the "Indians weren't doing anything with it."

This individual acts like a typical douche and seeks what he feels are easy targets- often femme-presenting folks- and tries to "debate" them by painting all Islamic people with the same brush. Today, when he had bad luck arguing with people ore knowledgeable than him, including some of our Muslim comrades, he began to employ this tactic against a pair of young women in festival gear. The crowd then surrounded him and drowned him out, taking the focus off the women.

Before this event took place however, Stephen Garvey of the fringe political party the National Advancement Party was speaking at City Hall. Garvey was to have hosted an event at Rotary Park today as well (early reports suggest it may have been poorly attended, but the numbers ARC received were very early so I'll hold off on providing any details about that event). He decided to hold a press conference at City Hall though to voice his outrage at the prospect of a group he had just called a dangerous hate group days before being denied a permit to stage their rally: 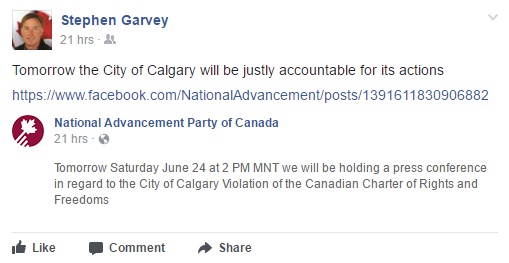 I might mention here that there is nothing in the Canadian Charter of Rights and Freedoms that requires allowing any individual or group use of public spaces for their private events; remember that the falling out between Garvey and the WCAI was because he invited Muslim groups and the mayor of the city to the June 24 rally at Rotary Park and DeLuca and others had explicitly stated Muslims were not welcome. And the fact is that the WCAI and allied groups are still holding a march to Olympic Plaza sort of puts their and Garvey's complaint about the suppression of their "free speech" to bed. Finally it really is hard to claim that you support "free speech" when you urge a police investigation of a person using her freedoms to warn Calgarians that hate mongers will be downtown on Sunday: 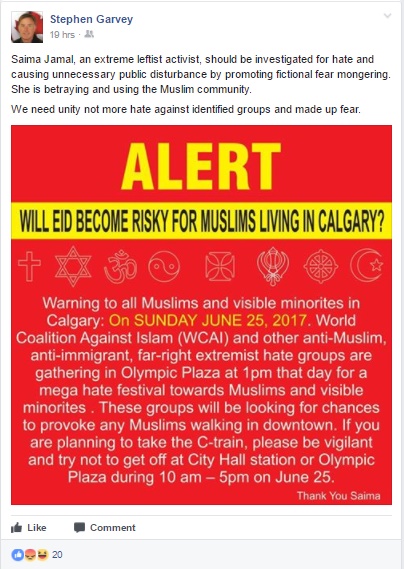 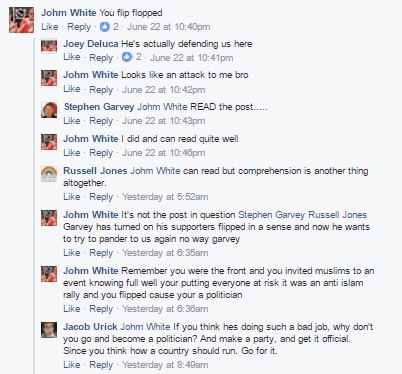 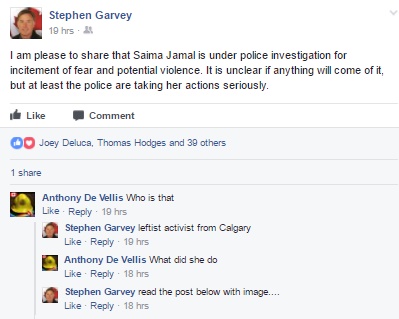 Yeah.... I somehow doubt that she is being investigated for warning people about the individuals with whom you once freely associated with and who you called a hate group after breaking with them.

So, given the.... er.... prominence of Stephen Garvey, one must imagine that many flocked to his call to City Hall today.

Apparently, not so much:


We got there while Garvey was speaking to media, and confronted him loudly- disrupting his conference. We were able to argue him into a corner where he said that if he was provided with screencaps of WCAI, III%, etc., using racist and hateful speech, that he would publicly denounce those organizations.

As for his support, It was literally Garvey, his one other candidate (Sikh guy), and a dude who thought Muslims pray to Satan 17 times per day because he read it in Free Dictionary Online.

Sorry, but they really do present the event like it's a monster truck rally.

I mean, this Sunday when the WCAI, Canadian Combat Coalition, Proud Boys from Toronto, probably a smattering of III%ers and Soldiers of Odin, and most likely some of the Street Church yobs march to city hall:


Some of the folks who will be participating can be found below: 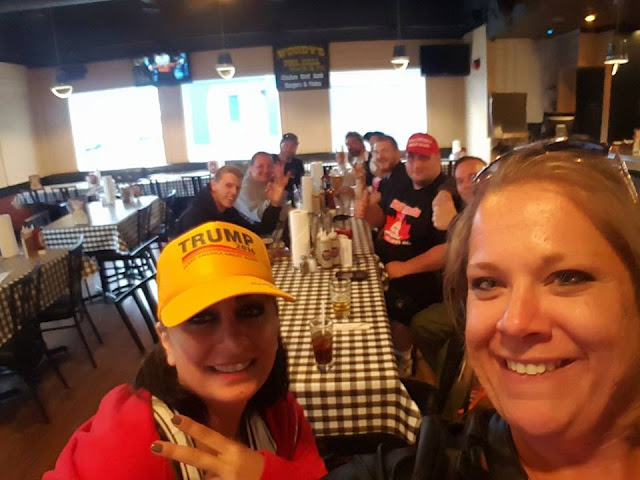 So let's do a bit of a run down of a few of these folks. We've already posted a lot about DeLuca, Wielenga, and Dean so we'll look at a few of the others.

Though not in the photo, Devon Mannix plans to attend. He has taken issue with an article from the "Calgary Herald" in which the police state that they will be safe during the WCAI protest because he know who are really being oppressed: 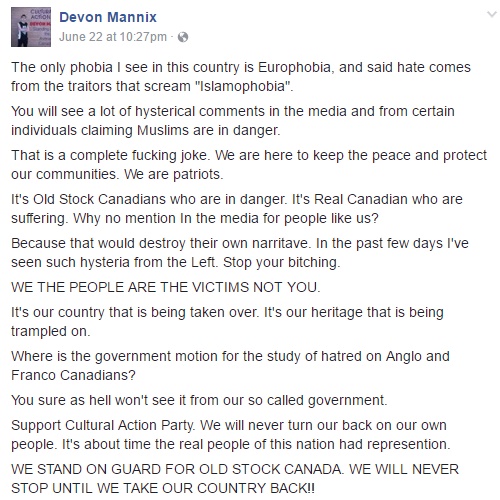 Keeping in mind of course that Mannix believes that the fires that devastated Fort Mac last year was really a planned effort by Rachel Notley, Prime Minister Trudeau, and the Muslim Brotherhood to ethnically cleans the city of white people because that sounds perfectly reasonable if you are a paranoid, hate-filled, troll: 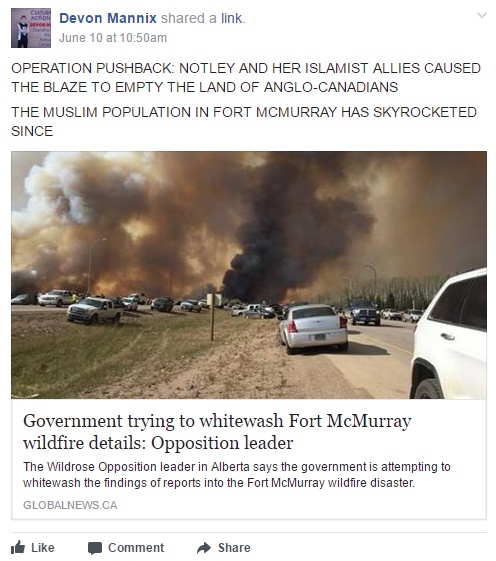 He also believes that there are car bombings occurring daily that are not being reported in the media.

Then there's our friend Christopher Hayes, the "captain" of the Saskatchewan chapter of the WCAI: 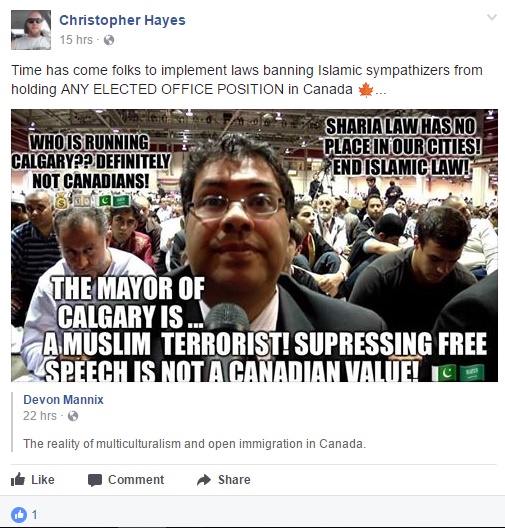 I remind ARC's readers that the reason why this defender of Canadian values needs to let the RCMP know of his whereabouts is because he was recently convicted of threatening to kill the prime minister. As such, his suggestion that the WCAI exists to protect Canadian democracy while at the same time threatening to kill politicians he doesn't agree with and demanding religious litmus tests for public office rings just a bit hollow.

Then there's Steven Alexander Gregory Nerō Claudius Caesar Augustus Germanicus Myatt who attended the Ottawa Million Man March which was shy of a million by approximately 999,750. Every mention of Myatt on the blog seems to be a huge ego stroke for the guy as he seems to think it means he's considered someone important.

The friend he's with, Brandon Vaughan, is an Ottawa-based "Proud Boy" who sort of looks like what would happen if a frat dude-bro and a chipmunk had a child: 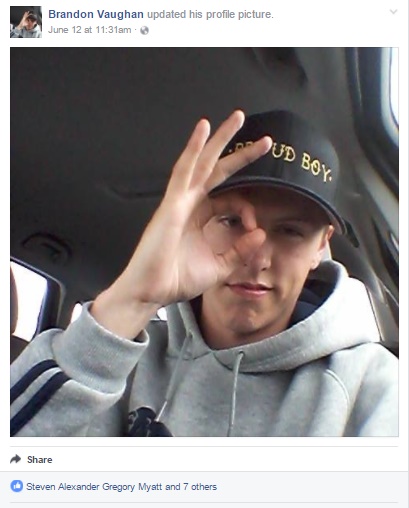 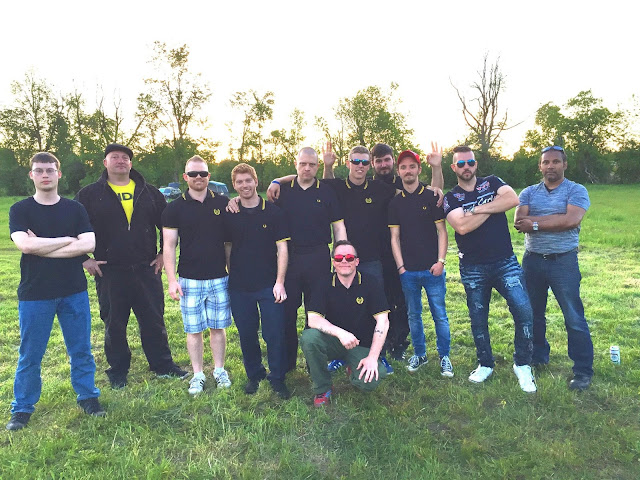 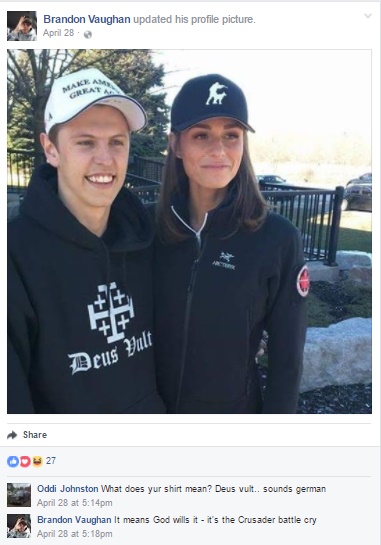 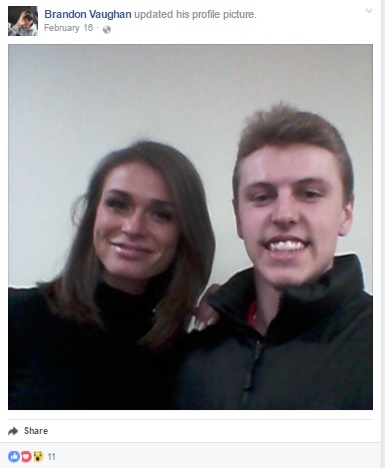 Georges Massaad is also traveling with Vaughan and Myatt. He too was one of the few who attended the Ottawa Million-999,750 Man March in Ottawa and has somewhat of a fatalistic view of the world, and a poor understanding of history: 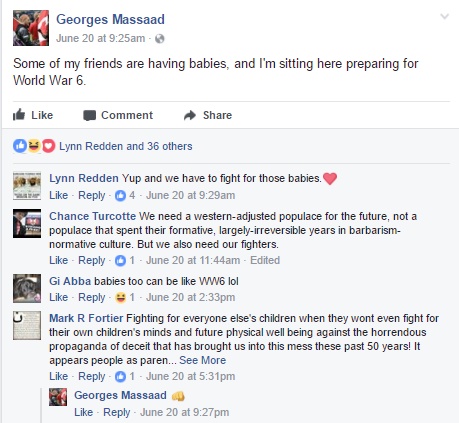 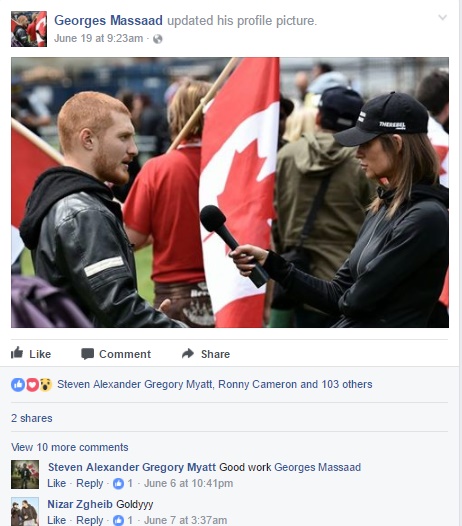 Then there's Robert Quinn who, quite honestly, looks a little too old to be hanging out with early 20somethings on a cross Canada road trip. At a certain point dude, it's sort of sad: 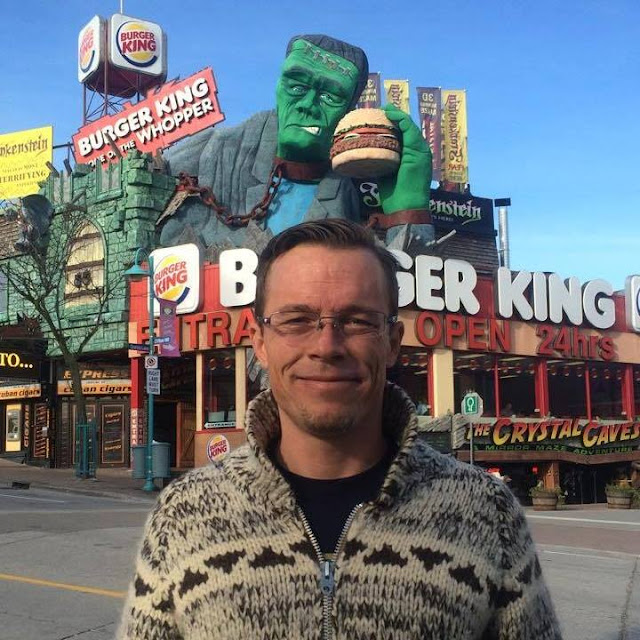 So these will be a few of the faces that will be seen at the MEGA Patriot Unity Rally walk to Olympic Plaza on Sunday.

What may not be making an appearance this time though are the stun canes that were on display the last time the WCAI held a protest on June 3:

Suffice it to say, tomorrow should prove to be interesting one way or another.
Posted by Nosferatu200 at 18:55

Re the group photos, it seems the gene pool in Racistville is running pretty shallow, despite all of the rain we've been getting these days. Too bad it's showing no signs of drying up altogether. Maybe that's why they're outcrossing with chipmunks.

Re the stun canes, because the contacts are exposed it's easy to stun oneself instead of your target. It's also easy for the cops to spot them. More discreet and safer devices are easy to find, at least for those of us with higher than room temperature IQ's. And I'm surprised they weren't arrested, because it's illegal to use them on people (they can only be used on attacking animals) and they were standing among a crowd of people. Oh well, at least if they zap themselves they won't be breaking the law. I look forward to seeing the inevitable self-zap or arrest on video and published on your blog for our entertainment.