Hey! Ogopogo! We have a Free Dominion mention in this just for you.


Have at 'er!
Another day, another mass grave found in Libya which has been attributed to the Gaddafi regime recently driven from power. While we know that there are a lot of views from our readers about whether or not we or any member of NATO should be involved in the Libyan civil war, but regardless of our differences we're willing bet that there are very, very few people who have any love for Muammar Gaddafi. To find support for him, you can however turn to the far right in Canada, specifically Paulie and former Ian Macdonald (and, of course, those remaining members of the now defunct Heritage Front not currently pushing up daisies):

So, in other words, the same people who rail against the Canadian government doing business with the, "Red Chinese" believe that we should have jumped into bed with another dictatorial regime that has as abysmal human rights record?

Not surprisingly, Paulie believes the blame for Canada's failure to snuggle up to Gaddafi for fun and profit rests squarely on the shoulders of Israel and the Jews:

Not that Paulie isn't at least consistent when it comes to his antisemitism. Back when he posted one of Macdonalds other glowing accounts of life under Gaddafi on Stormfront, one of the other posters made pointed comments regarding Gaddafi's support of terrorism. Paulie would have none of it and instead blamed the old stand-by: 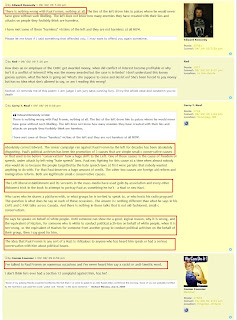 Well then this photo, taken in Calgary in August, might be a bit awkward then: 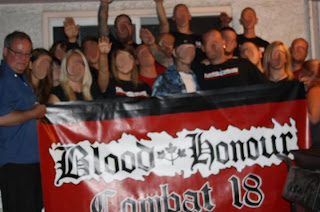 Talk about the company you keep.

Oh, on a related note, Ogopogo might not want to show this to backhoe who hearts Rick Perry:

If you're curious, here is what has so offended Paulie:

Is that a kindergarten chapter of
C18?

Oh no. After 7 years they finally pooled together enough money to buy a respectable banner. I guess that's the benefit of having 90% of a member basis that still receives an allowance.

What a miserable lot of misfits, these nazis. They hate everyone-- Jews, Blacks, Muslims, any White person who disagrees with them and they even hate their fellow-nazis.

When did there get to be so many Nazis in Calgary again? I thought they were all in jail or had run away. Who are all these new boneheads?

Wow. Paul & co are still rooting for a defeated has-been terror-supporting dictator. Of course, that other well-known bigot, Louis Farrakhan is doing the same as well. (He seems more intelligent than Fromm, but he makes up for it with his insane and hate-filled conspiracy theories).

As I mentioned before, it was funny to see antisemites of all stripes running confused on whether to throw Gaddafi and other former/current Middle Eastern tyrants under the bus and write them off as "ZOGs" or throw their support behind those dictators and write the Arab Spring off as "Zionist agitation".

nazi boys are sick in the head.