Hey London, Ontario. Guess What? You're Not Helping.

Okay, that's not fair, but London really is in the news for all the wrong reasons way too often

By Norman De Bono, The London Free Press
London, already known for roots of hatred and racism, will suffer a greater, global stain because of the banana-throwing incident at an NHL preseason game here, say race officials in the city.


"It's deplorable this happened in 2011, it's hard to believe," said Silence Genti, who has sat on the executive of the city's Afrofesta and was artistic director of MultiKulti, a new multicultural festival in the city.


"The mayor has issued a letter of apology, which was great, but I wonder if there would be the same outrage if it happened to a person away from the TV cameras."


The incident comes just as the city is positioning itself, and spending $4.1 million to do so, to put a positive face on for the 2013 world figure skating championships.


But does one incident that grabs international headlines undo the benefits of that event?


"It could have been anyone, for crying out loud," said John Winston, director of Tourism London. "They may have been fans here from Detroit for all we know."


Genti said while London has "made strides" in race relations, "pockets of ignorance and hate" remain.


"Whether it's indicative of London is a tough question. Let me put it this way: I think every person of colour in London has at some time dealt with hate and ignorance."
Winston agreed the incident is a stain on the city "in the short term," but in this viral media age attention will shift elsewhere in a matter of days and not impact the figure skating championships.


"I think its a one off. I expect it will never happen again," he said.


"This incident is one individual, it's not reflective of the city in any way, shape or form. It is disgusting to think this happened in the city."


But London has been headquarters to national white supremacist and neo-Nazi groups and the danger is this latest stunt will add to that profile, said Alain Goldschlager, chairperson for the League of Human Rights for the B'nai Brith.


"There are many places where racism (and) homophobia are present. But London unfortunately has neo-Nazi leaders living here, maintaining a presence, and we know there have been serious incidents here," he said.


In recent years, London has been home to the high-profile Canadian Heritage Alliance and Northern Alliance, among the racist groups operating here.


And in 2009, the Canadian Human Rights tribunal ordered the London-based Northern Alliance to stop spreading hate messages against Jews, Blacks, Muslims and the disabled.


London has also been highlighted in reports from the B'nai Brith in its annual audit of racist incidents.


In 2006, anti-semitic cartoons were sent to Jewish homes in the city during a by-election campaign.


Prior to that, London has been the setting of white supremacist activities dating to the 1980s.


"We have had our share of incidents and London does have racist elements. There are questions here that need to be addressed," said Goldschlager, a professor at the University of Western Ontario.


"It can make a difference. This is very unfortunate."


E-mail norman.debono@sunmedia.ca follow NormatLFPress on Twitter.
It didn't take all that long for one of the individuals mentioned in this story, London's own self-avowed, "biggest hater" to offer his two cents: 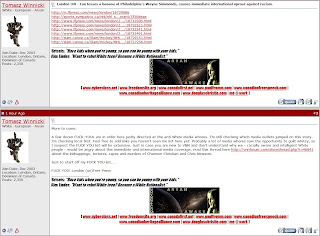 What's also sad about this incident is that just a few days before it happened, Simmonds said this in an interview:

"In fact, Simmonds said that race-based negativity in hockey “really doesn’t happen in Canada. That’s pretty much the way it is.”

Very sad to hear about something like this happening in Canada. Increasingly Blacks and Muslims are being targeted. Ceaseless Anti-Racist Education especially of the youth is key to stamping out this sort of primitive behaviour.

London has been in the news for all the wrong reasons lately...