We haven't made fun of Goudreau in a while, at least not since he, quite by accident and through no effort or skill of his own, managed to convince the "National Post" (who likely found his picture after a brief Google search with the key words, "Toronto" and "neo-Nazi") into promoting him as the face of organized racism in Canada, much to the chagrin of his embarassed fellow travelers:

Yep, he's the smartest and bested looking person he knows. And popular! That's what mama Goudreau tells him at least.

In any case, as a result of the recent msm coverage, we decided that he does warrant our attention, though not in the manner that Goudreau would likely wish.

After we stopped giggling, we decided that we could present a pictorial depiction of how such a night on the town would probably go for Goudreau.

We begin our tale in the Goudreau's lair, a place that smells of stale urine with a hint of hopelessness.

First, the Goudreau prepares himself for an evening of sexual adventure and experimentation with a little manscaping and manly calisthenics: 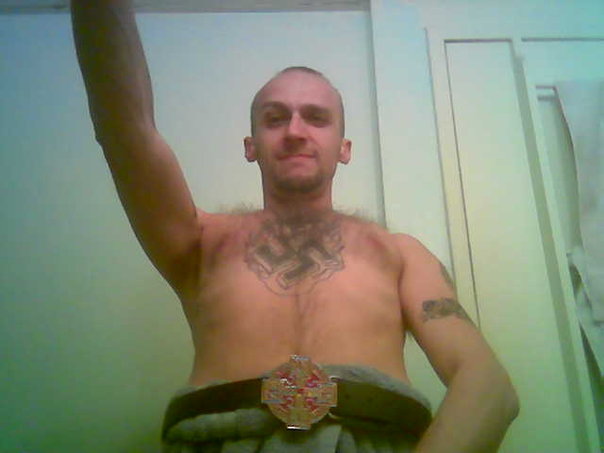 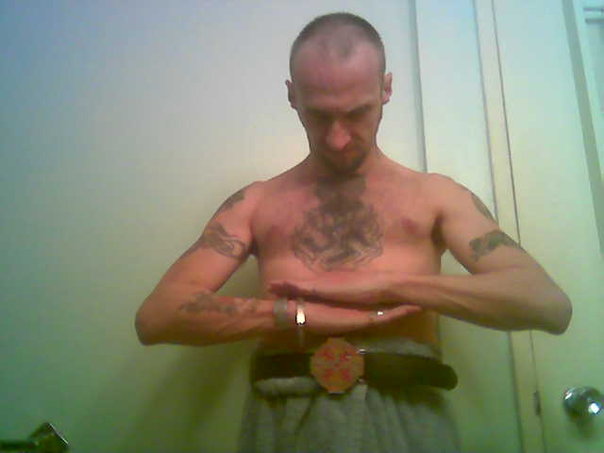 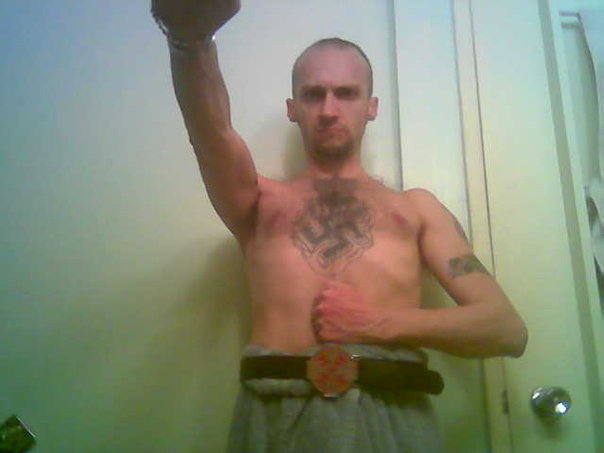 Still standing in front of his mirror, the Goudreau practices the face he will use in his efforts to seduce the ladies. Will it be the slightly mischievous (or constipated) Goudreau? 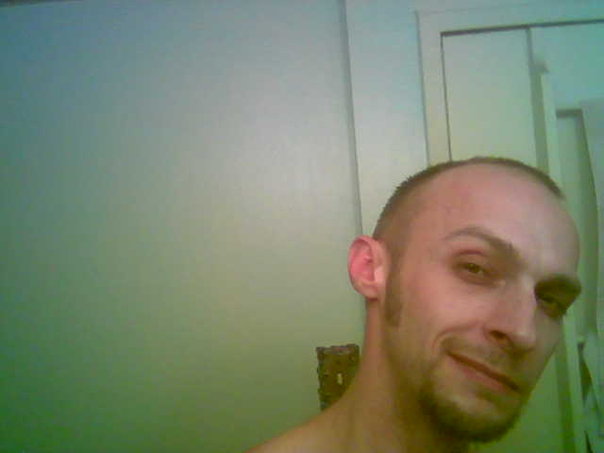 Or, will the Goudreau go for the sexy beast look that melts the heart of even the coldest of ice princesses? 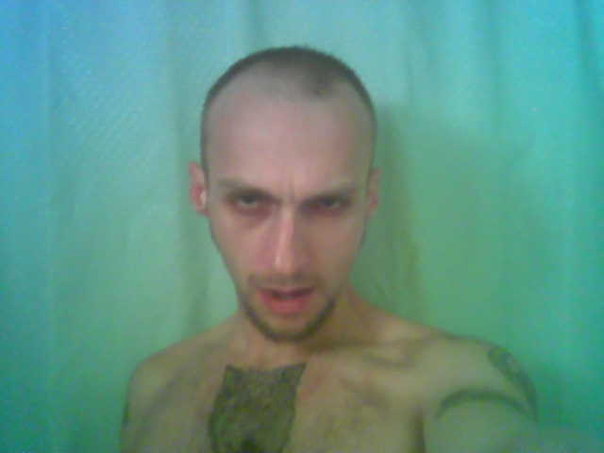 Ohhhhhh, we're getting goosebumps! Or maybe it's just nausea? Time will tell.

And not to leave anything to chance, the Goudreau will, if necessary, break out the feminine side of his persona: 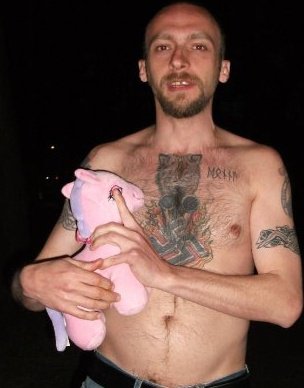 Game time! Watch out ladies! The Goudreau is on the hunt. His game? The most dangerous, sexiest, game of all.

Uhm, no. We don't mean Ice-T. Try to keep up with the narrative folks.

Cut to the club. There, across the room, the Goudreau gazes upon a creature of stunning beauty. Long, blond hair. Big, blue eyes. A figure like a real life Barbie doll. The Goudreau's vision of Aryan perfection. Oh! But she's with another man.

What? You think that alpha male Kevin Goudreau will allow a pencil-neck meterosexual the pleasure of that beautiful woman's company? No! What the Goudreau wants, the Goudreau gets. Ohhh yeahhhh!

Confidently, the Goudreau strides across the room, his shirt unbuttoned to show off the gold-plated chain which accents his 155lb frame and sunken, boy-like chest. He walks up to the woman and her scrawny, 265lb body builder boyfriend. 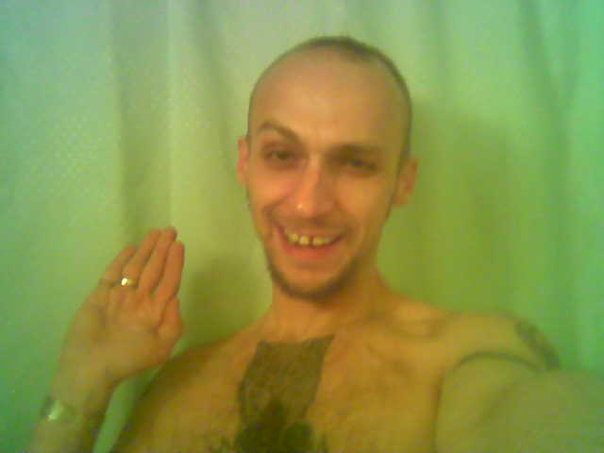 Ouch. Awkward, though it could be worse. And soon it gets worse as the boyfriend proceeds to pummel the Goudreau to a bloody pulp: 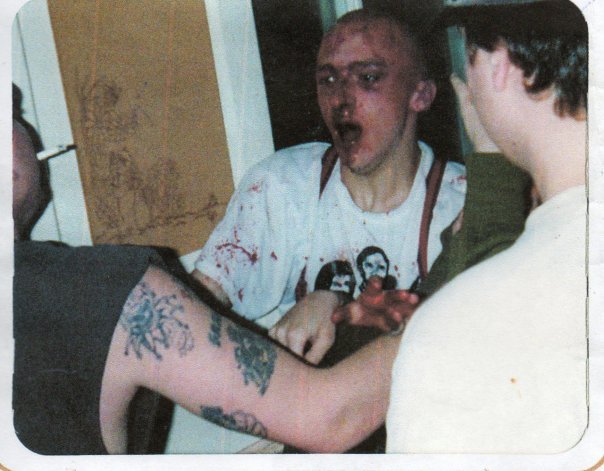 Battered. Bruised. The Goudreau returns to his lair with his tail between his legs. Needing to satisfy his lustful desires but too afraid of actual women after the emasculation suffered earlier in the evening, the Goudreau decides to find sexual gratification with an old stand-by that has only rarely turned him down: 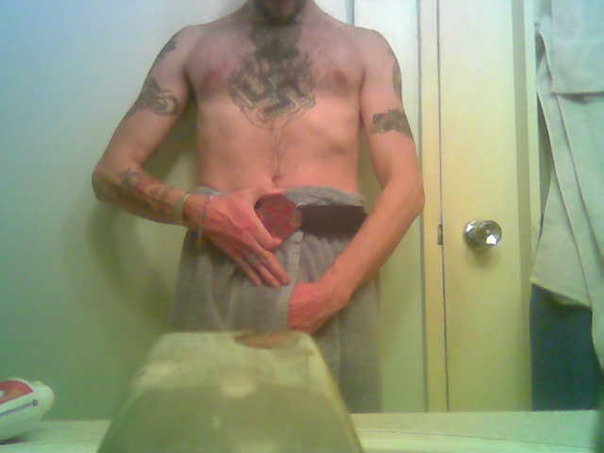 And the Goudreau silently weeps.

Thank you for making me spit out my coffee all over my computer this morning. It was worth it, so I won't bill you for the damage ;)

You are low class jealous bastards and bad karma butheads !

Oh, we accept the low class and bastard accusations, but jealous? Of Kevin? Naw!

You are an ARTIST man!!! That was SOOOO Funny!

ha, ha, ha why does the idiot wear his trousers up to his breasts. looks a bit simon cowell like to me. kev if your the best the white race has to offer, then they are truly doomed.

KIds are aloright. He better have to post nacked.

That's it, I'm converting to purple.

Yeah! I strongly agree with Nosferatu200.