Boneheads Fight the Law and the Law Wins. Again

A shout out goes to the newest member of the Collective (nice job norton200) who caught this:

First posted: Sunday, September 04, 2011 11:38 AM EDT
CALGARY - It didn't end as dramatically as Bonnie and Clyde, but alleged bandit brothers and their lovers, who are also sisters, were brought down by the law this weekend.


Albertans Ian Michael Butz, 28, and Jason Avery Butz, 26, were being hunted in the Creston, B.C., area, about 500 km southwest of Calgary, since Friday.


The brothers were wanted for a pair of armed robberies at gas stations in the Peace River, Alta., area, around 780 km north of Calgary.


A shotgun and camouflage clothing were used in the Aug. 31 heists in the small northern Alberta villages of Nampa and Donnelly, and an ATV was used as the getaway vehicle.


The women were picked up at the Porthills/Rykert border crossing between British Columbia and Idaho Friday around 8 p.m., riding the ATV.


This lead the RCMP in nearby Creston to believe their fugitive boyfriends were in the area and might try to cross next.


Active searching by cops and Canada Border Services Agency (CBSA) turned up nothing, until an off-duty CBSA officer happened across the brothers wandering on foot around 9 a.m. Sunday.


"He spots them walking along Hwy. 21 at Erickson Rd., essentially in Creston. They're still dressed in the camouflage," Cpl. Dan Moskaluk of the B.C. RCMP said.


"Both were arrested without incident, (but) we did not recover the firearm."


The Butz brothers are each charged with two counts of armed robbery and while investigation into the women's involvement continues, Moskaluk said charges will be sought against them as well.


He noted Creston is only 20 km from the same Canada-U.S. border crossing their girlfriends tried to cross.


"We're all relieved that they're off the streets," said Moskaluk, noting a high likelihood they would have offended again, given the nature of the accusations against them.


The border service officers participating in this search are proud of the role they played, CBSA spokeswoman Faith St. John said.


"Intercepting criminals is one of the ways that they support CBSA's national security mandate," she said.


Moskaluk figures these fugitives' time on the lam would have ended in Creston regardless of cops' good fortune Sunday.


"It's a fairly small community, (and) their ears will certainly perk up when they hear there are people at large and armed," Moskaluk said.


On Twitter: @SUNdswood
So, big deal, right? A couple of lowlifes arrested for armed robbery. What does this have to do with our covering the racist movement in Canada?

Turns out at least one of the suspects was very much a part of the movement based on information found on his Facebook profile: 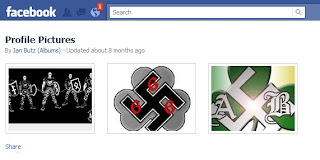 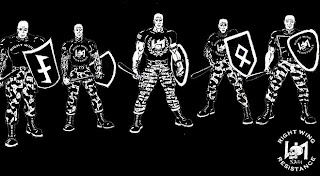 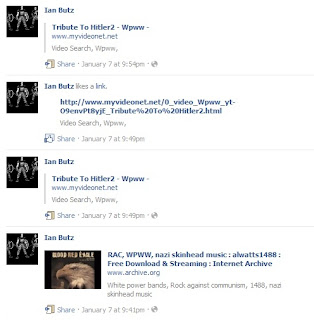 A bonehead suspected of committing a serious crime?

Funny. We aren't all that surprised by this revelation.