Photograph falls under Fair Use. 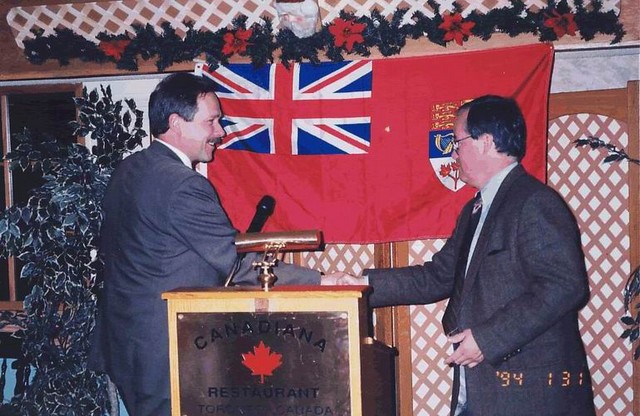 Link Byfield shaking hands with Paul Fromm in November 1999. Byfield was being honoured at dinner held by Fromm.

Link Byfield is currently a candidate for the Wildrose Alliance Party in the constituency of Whitecourt-St. Anne (see Byfield campaign website). In 2004, he was chosen as one of Alberta's four senators in waiting, though the Federal government is not obliged to appoint him to the Senate.

Paul Fromm is a former teacher in Toronto who was fired and later stripped of his teaching credentials for his association with well known racist and holocaust deniers such as Ernst Zundel. More recently Fromm has been acting as an advocate for men and women brought before the Canadan Human Rights Tribunal such as Glenn Bahr, John Beck (Tribunal hears racism complaint against website), Terry Tremaine, Jessica Beaumont (Warman v. Beaumont), and others. He has also spoken at at least two meetings of the Aryan Guard. 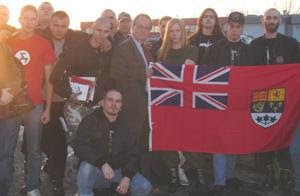 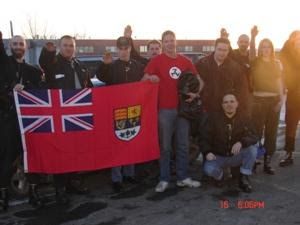 We don't want to suggest that Mr. Byfield is connected to the Aryan Guard, and the dinner held by Fromm in his honor took place almost a decade ago, but it is of concern that a significant political party can so easily be connected to extremists. We hope that Mr. Byfield disavows the racial rhetoric espoused by the likes of Fromm and his like-minded associates, and that the Wildrose Alliance endeavors to root out any extremist elements that may have infiltrated their party much like the Reform Party did in the early 1990's.
Posted by Nosferatu200 at 17:33

the sad storry is that canadians fought wit this flag on there uniform against the nazis in germany and europ. this wank are trader and looser . they love canada? ha ha ha ha ....i feel sorry for all veterans from WW2