Anyone who pays any amount of attention to the far-right knows that it is rife with infighting and drama. The Yellow Vests Canada movement is no exception to this rule.

It seems that Pat King is on the outs with Jay Riedel, Kenny Winsor, his ex-girlfriend Christy, and basically half of the movement.

While he's prone to melodramatic live feeds where he yells and cries, this was apparently a whole new level. We were unable to snag a copy of it before it was deleted (mid-broadcast) but those who saw it have marveled at it's ridiculousness.

The video was great. He ranted and yelled and cried. It was taken down while I watched it, my regret is not saving it first! It’s too bad there was some great clips.
— Kim 🇨🇦 (@kimbo1942) July 27, 2019

During this feed, King reportedly went off on his ex-bff Jay Riedel, leader of the Estevan SK Yellow Vests, resulting in in Riedel leaving the page: 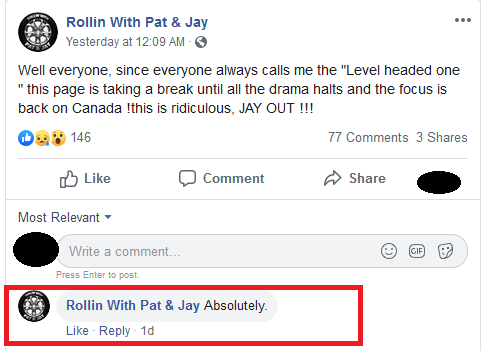 I wonder what they did with their Five Finger Death Punch themed friendship bracelets. Maybe they can auction them off to raise money "for the cause." 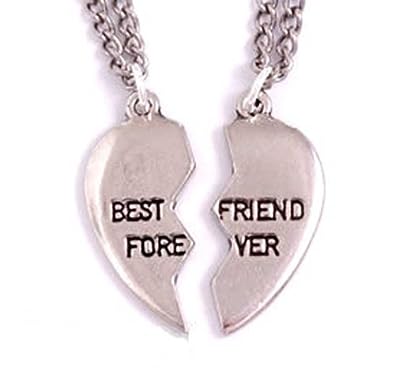 This also caused division within their followers: 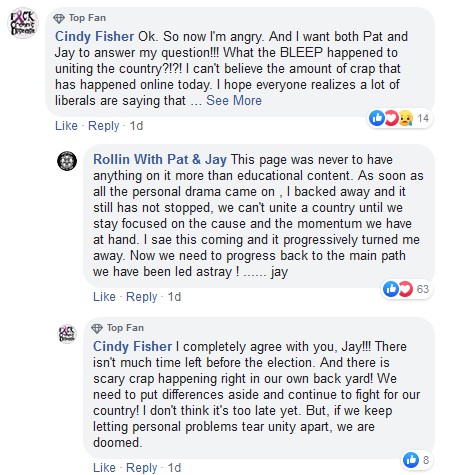 Apparently, King accused Christy of being a stalker and "antifa," so naturally she had to defend herself, because she's a good person who isn't racist. 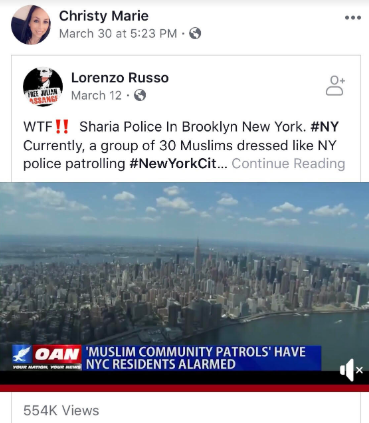 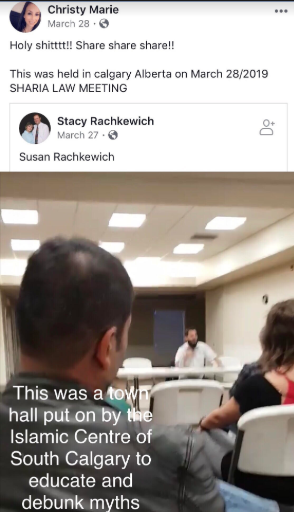 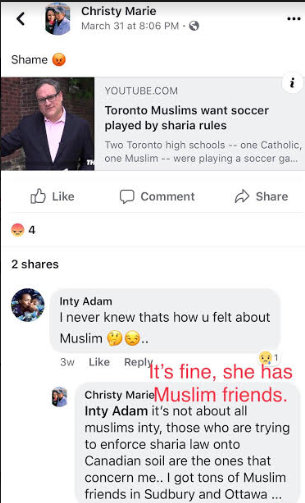 The one where King uses his girlfriend's biracial children for cred

The one where  King lies about how he lost his leg

The one where King lies some more

The one where King joins in

Here is the full video.

The responses to the video show a number of people fed up with King's grifting, including Kenny Winsor of NL Media, and Carl-Edward Fleury.

As an aside, if you are trying to brand yourself "not racist," then Fleury is the last person you want to hang around. 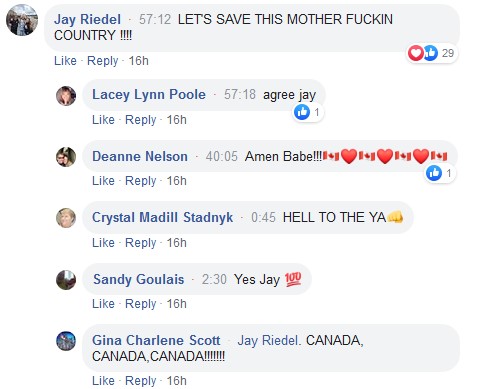 King showed up in the comments: 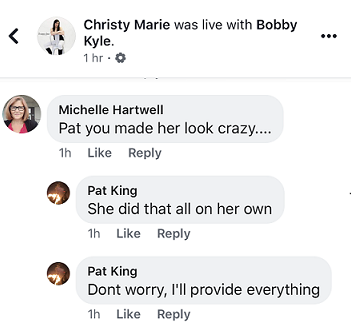 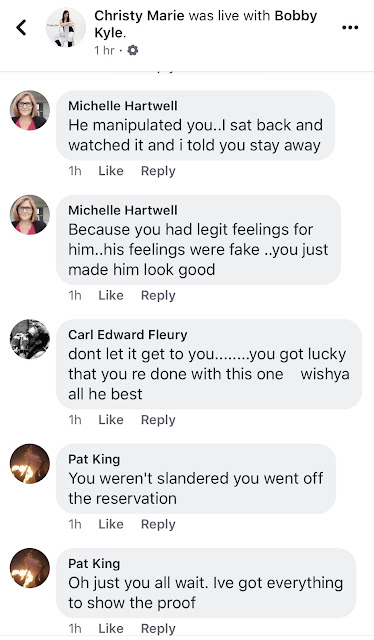 There were allegations of all kinds, including stealing money and lying about tax returns: 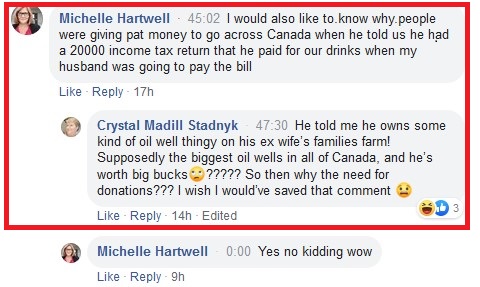 How he lost his leg:

And the hilarious declaration that he no longer has control of his own Facebook page, Rollin with Pat & Jay. 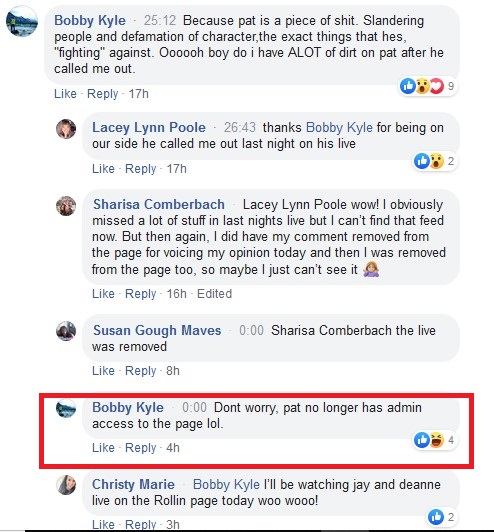 For more on King, Riedel, and Christy, see: Rollin' With Pat and Jay, Part 1: Debunked and Part 2: Like the Hunger Games, But Not. 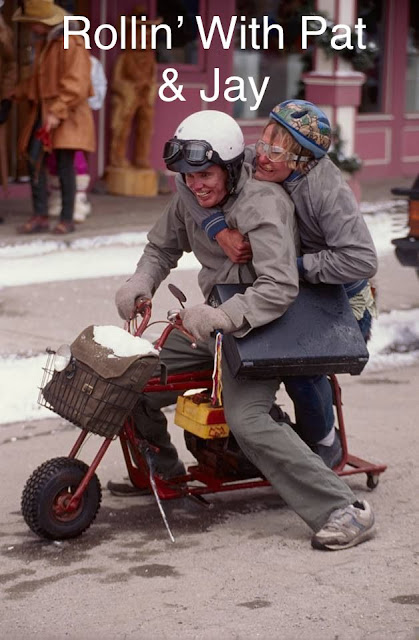 In any event, if Christy ever does want to be antifa, and give us intel on King she says she has, and really give it to him good, she can get in touch with us.

UPDATE: It turns out that Kenny Winsor was able to save King's video prior to it being deleted, and he provided a clip to Christy Marie. There's also rumours that Pat King's real name is not Pat King. 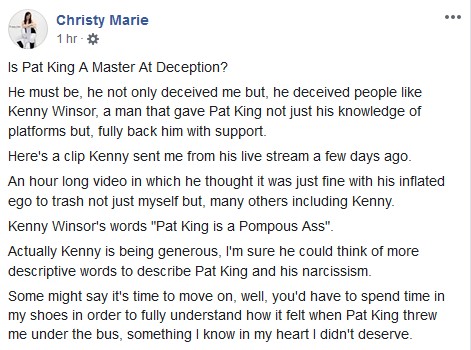 UPDATE #2:  Kenny Winsor, of NL Media and previously of Rollin With Pat & Jay has released a second clip of the Pat King Meltdown live feed. In this clip, King is speaking with Connie Whittaker, who lambasts King for his grifting and says every time he cries "women open up their wallets."

Stay tuned I have more about Pat King

Kenny has the whole video, but he won't share it unedited as Pat exposes Kenny on a number of items. KW will likely just piecemeal it out every other day or so, just to garner attention.

So, we know that there was 500 plus dollars raised for KW to get an airline ticket out of Newfoundland as he claimed he was in fear of his life. His life was never in danger. When he was asked when he was flying to Alberta he told them it was none of their business and to fuck off. (this from a man who claims the current government lies and miss- uses money)
There were digs made about all the pages and profile that KW has created.
There was discussion around KW interfering in relationships and going off topic (I dunno maybe trying to convince Canadians that there are aborted fetus in Pepsi is a tad bit weird, especially when yer sitting back on a live feed sucking back on a Pineapple Crush, made by Pepsi...oh and lizard people...oh and Soros is paying everyone who knows Kenny is a parasite.

Kenny is all sooky-baby over earning the kkkenny...while he posted a pic of a seven year old child raising a pride flag on their property with a maple leaf in the design. He knew it was a child. So he blotted the face out (this is Kenny's idea of doing good)...and he sat back while his band of twits, went nuts, and spewed not just hateful words but threats to harm the child. Kenny deleted all the comments from people that were appalled by the threats and left the vile. He KNEW this was a child. He did not care. He sat back enjoying every moment of it. He got off on it. He never once intervened. He admitted in a live that he posts, deletes the opposing commentary, blocks people etc & comments leaves the vile, just to get more page engagement. Just to get more page engagement...pretty darn despicable.

Stay tuned I have more about Pat King, Kenny says....lol...and there's more about Kenny that's going to come out.

Kenny created fake pages that allowed for the ongoing harassment of a gentlemen in NL, implying that Mr. Hai was a terrorist. A man that has raised over 300,000 for the betterment of NL. Kenny stormed this man's campaign office. Edited the video and shared it. How many fake pages did he make, who the heck knows. He also did not stop the lies & threats aimed at the Hai's.

There's a terrorist in NL and its name is Kenny.