This might be a bit dated, but ARC just received some information that makes it relevant again.

Back in July 2014, Eric Brazau entered a crowded subway car along with fellow bigot Ron Banerjee. His intention was to "debate" (read: harass and harangue) individuals on the car about the dangers of Islam and Muslims while Banerjee, acting as if he didn't know Brazau, took a video of the exchange:


Not long after, Brazau was arrested:


Cut to January 2015 when he was convicted of mischief, causing a disturbance, and breaching probation. He was sentenced to 9 months in jail but was released pending an appeal:

At the time of his conviction, Christine Blatchford wrote an opinion column for the "National Post" in which she seemed to mock the sentence and overly sensitive Torontonians. One part stands out for me:

Astonishingly in a province where those convicted of more serious offences regularly receive suspended sentences or house arrest, Mr. Brazau was denied bail and has been in custody since his arrest that day, July 29, or for five months and nine days.

Brazau did appeal his sentence which was perhaps not surprisingly rejected. ARC received a link to a copy of that appeal where we learned that Eric Brazau has a criminal history that includes assaults, uttering threats, and use of a weapon that goes back more than 30 years: 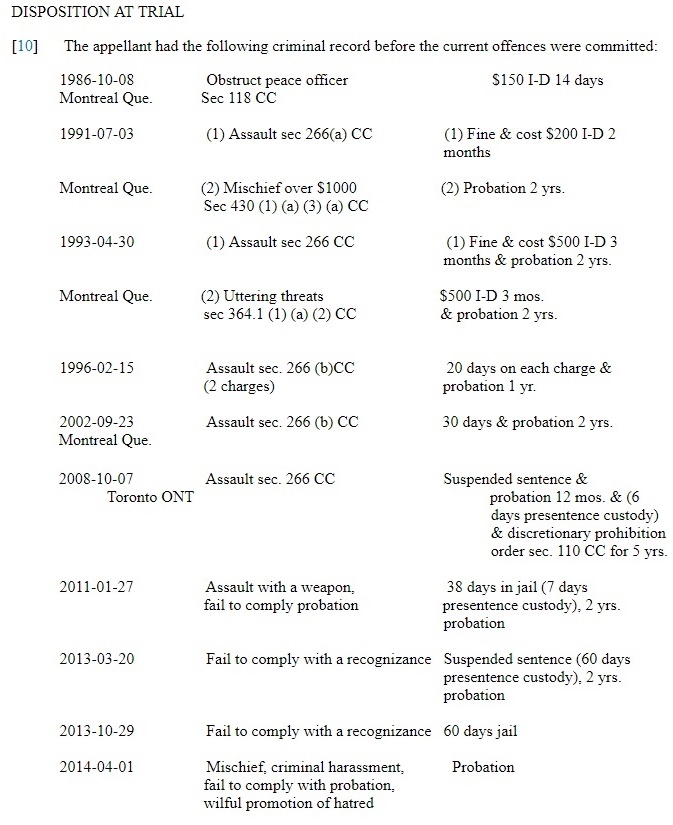 So, maybe a long criminal history and a history of failing to comply with the conditions of his probation has something to do with the reason he was held in custody prior to his trial?

Just throwing that out there.

Suffice it to say ARC will be updating our "History of Violence" article very soon.