We begin with a very brief update on Paulie who is so tickled pink (well, more pink than he usually is) about Trump's election that he isn't bothering to try to conceal his views in more "respectable" terms anymore: 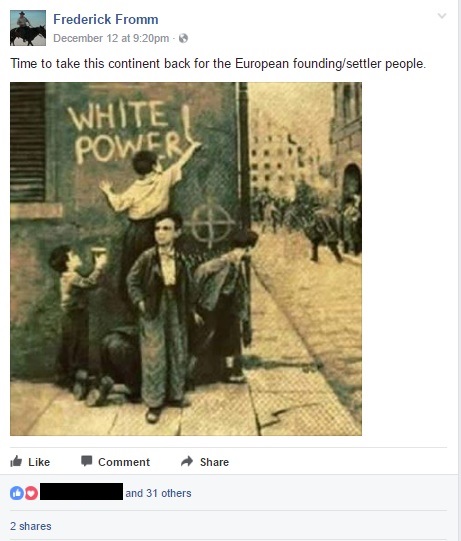 We're sure that Paulie will be leading the charge.... so long as others foot the bill so that he can maintain the lifestyle that he has become accustomed to.

And as long as others actually take on any potential risks. That of course goes without saying.

Out in British Columbia, some members of the Soldiers of Odin tried to crash an anti-racism rally in Richmond. Suffice it to say that it didn't go especially well for them:


However, it was marred slightly by the appearance of a small group from the Soldiers of Odin, a citizen-based “street patrol” organization, closely connected to anti-immigration movements in Finland.
....
On Sunday, although claiming not to be racist, pledging support for everyone, irrespective of race and carrying signs stating “Stand And Fight Against Hate,” — the three men representing the Soldiers of Odin were told their presence wasn’t welcome and, after a few words were exchanged, moved further down No. 3 Road.

Despite repeated attempts to contact the Soldiers of Odin’s B.C. chapter through its Facebook page, the News was not able to reach the group or its local leaders for comment.

At the event, Soldiers of Odin representative Kris Erickson told the News’ photographer that everyone had got their message wrong and claimed that they were there to express solidarity with the protestors.
....
SOO, which has chapters across Canada, denies, on its public Facebook page, any accusations of being racist or anti-immigrant and claims to exist to primarily protect women and children by keeping the streets safe.

However, it’s been alleged the group’s private Facebook page is filled with racist and xenophobic comments, mainly directed towards Muslims.

In other interesting news, we found the following rather enigmatic post on Quebec SoO chapter president David Tregget's Facebook page: 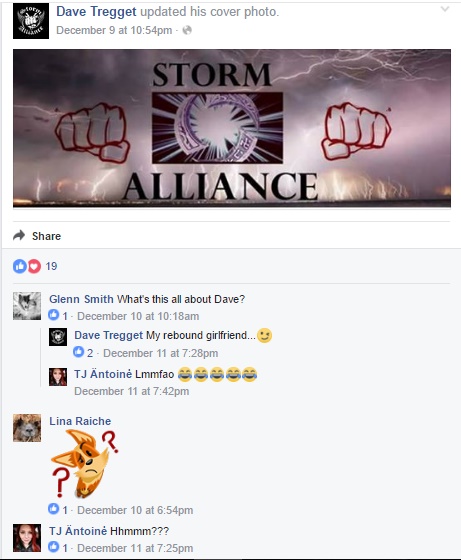 Or, as we latter learned, former Quebec SoO chapter president:


But as Tregget was busy building the group's membership he was also running afoul of the national leadership as well as the movement's international leaders in Finland.

According to his one-time second-in-command, Tregget gave a series of interviews in the fall in which he downplayed the links between the Finnish and Quebec branches of the group.

He also insisted on patrolling the "political correct" areas of Quebec City, like St-Roch, where the group was less likely to confront the city's immigrant population, said Katy Latulippe, who is now the acting president of Soldiers of Odin-Quebec.

There are conflicting accounts of what, precisely, happened. Latulippe said Tregget was suspended. Tregget said he quit: "Finished with the racist image of Finland," he later told CBC News in a Facebook message.

Regardless of the details, what is clear is that with Tregget out, and Latulippe in, the group's Quebec chapter will undergo a reorientation.

Latulippe is still a relatively newcomer to Quebec City, having moved there recently from Magog, Que.

A welder by trade, she's not yet familiar with the names of the various neighbourhoods in the city. She knows, though, the chief demographic characteristic of the area where she feels the Soldiers of Odin should be making its presence felt.

"Dave avoided that, on patrols, we go into areas where there are a lot of Muslims or Islamization," she said during a recent phone conversation.

"But, when it comes down to it, that's where we should be patrolling."
....
That relative anonymity among the general public may change if Latulippe goes ahead with her plan to organize more confrontational patrols.

The goal, she said, is not to intimidate Muslim immigrants but rather make them aware of Quebec values.

And when other extremist groups don't want anything to do with you, well....


On its Facebook page, the leaders of La Meute informed its 43,000 members that they would be distancing themselves from the group.

"Given that the Quebec branch has itself announced its closer ties with the Finnish group, it's now clear that all association between our two groups will be impossible."

As for Davie, someone who's Facebook account is linked to a number of neo-Nazis and extremists in it's own right, he decided that he wasn't done with this brand of political activism:


As for Tregget, he initially intended to take a break from political activism following his split from Soldiers of Odin.

But, he said, his phone started ringing soon afterward.

He has decided to start a new group with other disenchanted members. Its working title is "Storm Alliance."

These fellas just can't seem to get along for very long.

Back in Toronto, one of the very few remaining advertisers for "Your Ward News" edited by neo-Nazi and sexual predator James Sears might be in a bit of trouble:

The campaign to convince advertisers to drop YWN was wildly successful mainly because most of them had no idea what kind of publication YWN had become and were quite frankly disgusted with it.

But David Faed, despite being made well aware, insisted he was sticking around. Considering David Sears' sexual assault conviction (and his more recent efforts to try and convince juries to acquit men accused of rape in spite of the evidence), perhaps it isn't surprising that Faed is sticking with Sears given Faed's claimed legal specialty.

However, his inclusion as an advertiser has caught the attention of Richard Warman and based on our long observation of Mr. Warman's work, Mr. Faed may come to regret his recalcitrance:


Complaint launched over ad in newsletter

A few of the relevant points are as follows:

Warman filed the complaint in March, seeking an investigation.
....
Warman says he did not believe it when he was first told a lawyer was advertising in Your Ward News.

In a statement to Law Times, Faed said, “This is libellous trash falsely attributed to me. I warn you to reconsider this.”

Warman’s complaint lists a number of sections in the law society’s Rules of Professional Conduct, which he says Faed’s advertisements have broken.

One is s. 2.1-1, which requires that lawyers have a duty to carry out their responsibilities “honourably and with integrity.”

Section 6.3.1-1 of the rules requires lawyers have a “special responsibility to respect the requirements of human rights laws” and to “honour the obligation not to discriminate.”

But Faed needn't worry because Paulie has jumped on this bandwagon as well:

We're sure that Paulie's efforts will be wildly successful, just as his advocacy for Glenn Bahr, Terry Tremaine, the case of Robert McCorkill's will, and so many other similar instances were also wildly successful.

On the Goudreau front, one of our favorite pervy misanthropes has decided to chime in.

No, not Paulie this time: 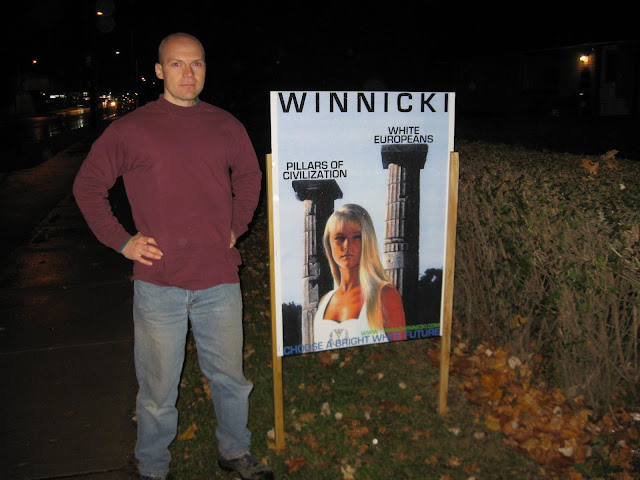 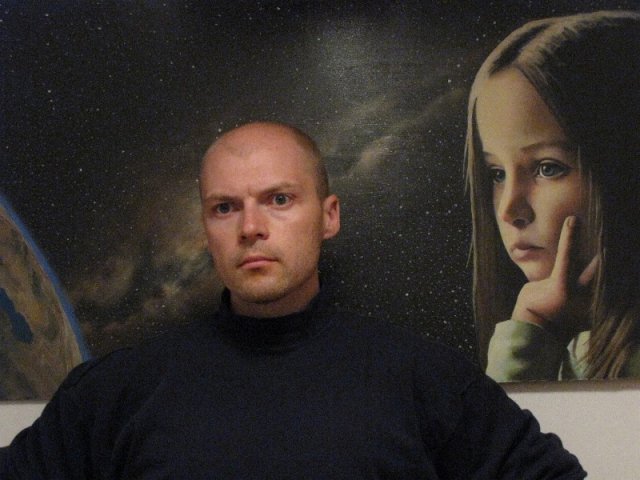 In this case though, Tom Winnicki tries to offer sage advise to would-be "White Nationalist" leaders:


As far as spokespeople for the White Nationalist cause, Kevin Goudreau is fairly coherent and handles the anti-White media well.


And that's one of his more coherent videos.

Finally, and in reference to the article from this past Monday regarding the anti-carbon tax rally in Calgary, Ezra Levant remains an asshole, though that isn't much of a surprise now is it?
Posted by Nosferatu200 at 00:26

Hahaha SOO helping fight hate. The founder is a Blood and Honour guy.
I can't get enough of that group such entertainment.

Re: Goudreau's inspiring video.
"... every sperm has its purpose."
Cheesuz, the Python references just write themselves with this lot.