Sometimes we learn about some particularly odd characters when receiving information from our readers: 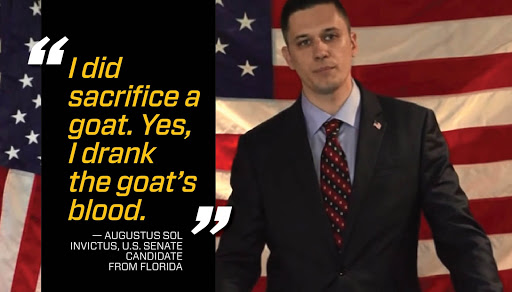 Meet Augustus Sol Invictus, a Libertarian candidate for the senate seat being vacated by Marco Rubio.

Aside from changing his name to a Latin phrase which is loosely translated as "Majestic Invincible Sun" and, thus, indicating that he has an ego that Donald Trump might envy, Augie here is an interesting cat for other reasons:

There are a few reasons why Wyllie finds Invictus such a distasteful character. "Mr. Invictus has repeatedly vowed that it is his destiny to start a second civil war in America," Wyllie wrote in a Facebook post announcing his resignation. He continued, "He has described himself as an American Fascist... He has expressed support for a eugenics program... Many of his supporters are known members of Neo-Nazi and white supremacist groups."

While the Florida Libertarian Party didn't out-and-out eject Invictus from its ranks, it did issue a press release Monday condemning the Senate candidate's views. "The LPF has not endorsed Augustus Invictus and has not provided him with any support," the party's new chair said in the statement. But, the party added, "Under the law, we cannot prevent him from running as a Libertarian and he is not required to enter our certification process."

The impetus for all this was apparently a post on Invictus' Senate campaign website titled "A Declaration of the Failings of the US Government." In it, the candidate does display some pretty racist views, like accusing the federal government of abandoning "its eugenics programs & elitist mindset in favor of a decadent ideology that rejects the beauty of strength and demands the exponential growth of the weakest, the least intelligent, and the most diseased."

Still, weird name and racist views aside, Invictus might have gone unnoticed by the public at large if it weren't for Wyllie's assertion that, "Mr. Invictus was ejected from Ordo Templi Orientis for brutally and sadistically dismembering a goat in a ritualistic sacrifice." Naturally, this got people's attention, piquing the interest of the national news media....

Now we generally don't write a lot about the American nutters unless there is a direct link to Canada, so you all know where this is going:


When we took a look at the guest list we found some interesting characters too: 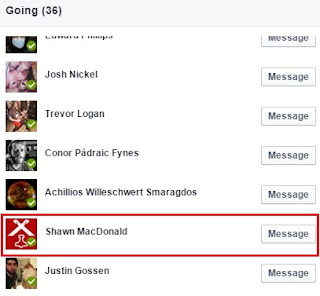 Our readers are quite familiar with Shawn MacDonald as a former member of Volksfront and current member (and presumably leader) of Blood & Honour based in BC. Last we heard he had been charged with assault, however it would appear that the case may not have actually gone anywhere.

A second interesting character is this young woman: 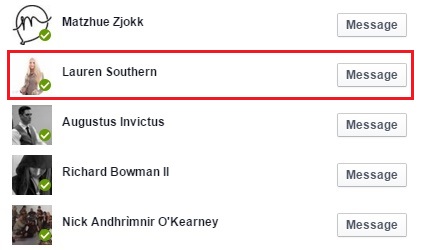 Lauren Southern is a Simon Fraser political science student and one time federal Libertarian candidate for parliament. She's also made a name for herself for trolling women's groups and protests: 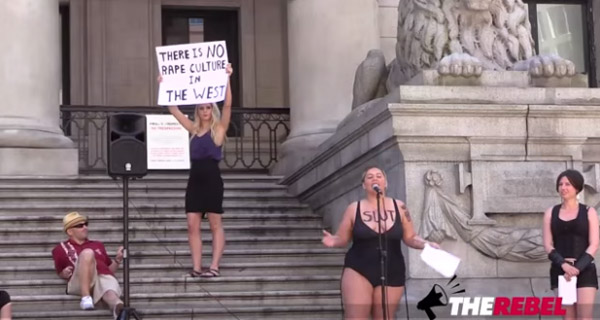 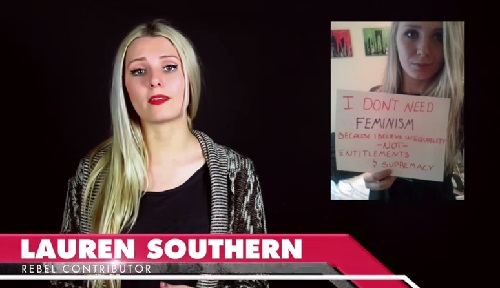 Oh, of course she's associated with Levant's "The Rebel."

Sadly for Herr. Macdonald and Ms. Southern, it appears that if they would still like to attend Augie's speech, they might have to prepare themselves to be rained on: 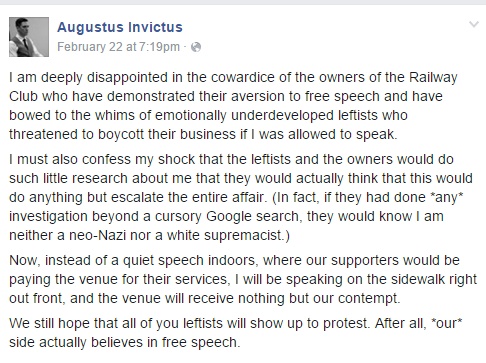 Ms. Southern for one was horribly disappointed and posted this missive in response: 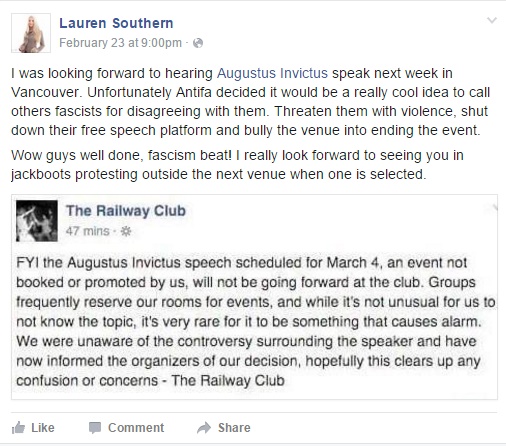 Perhaps ironically, Ms. Southern and her boss Ezra Levant are both Donald Trump supporters which, in light of his most recent bombast might result in some degree of cognitive dissonance given both of their support for unrestricted free speech:

....The celebrity businessman turned Republican presidential front-runner told a rally in Fort Worth, Texas, on Friday that he wants to "open up" libel laws. The changes envisioned by Trump would mean that "when they write purposely negative and horrible and false articles, we can sue them and win lots of money," he said.

Trump added that, should he be elected, news organizations that have criticized him will "have problems." He specifically mentioned The New York Times and The Washington Post....

Libel law in the United States generally makes it difficult for public figures to sue reporters or other people who criticize them. To win such a case, the plaintiff must demonstrate that factually incorrect statements were made with actual malice or a reckless disregard for the truth.

Trump said he would like to lower that standard. "We're going to have people sue you like you never got sued before," he said.

In other news, PEGIDA Canada is still organizing "flash" demonstrations resulting in the usual turnout of the same malcontents. 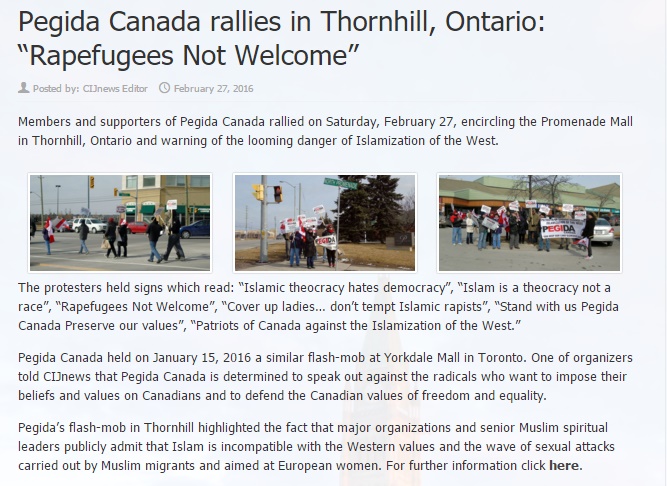 But now they seem to have a friend in Meir Weinstein who's JDL is sponsoring a Canadian speaking engagement involving Paul Weston (leader of PEGIDA UK) and Lars Hedegaard: 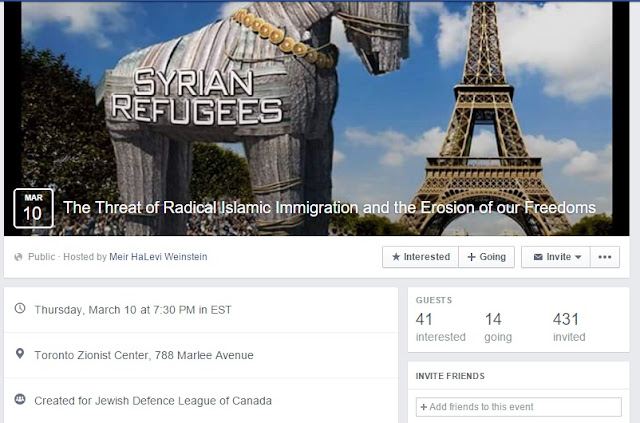 Some of the folks at PEGIDA Canada are giddy with excitement, though it's not clear quite how many will come out from their bunkers to attend the event. 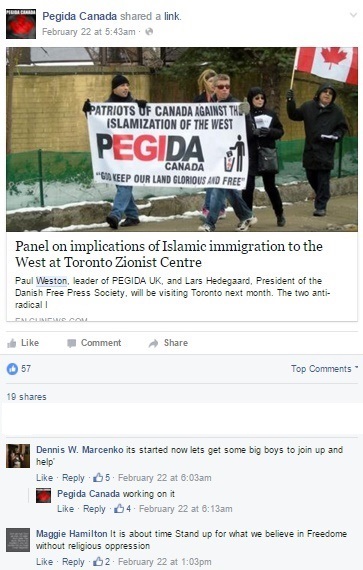