Before we get to the meat of things, we thought we would begin with a screenshot taken from the Canadians 4 Canadians since it will explain, in some part, the mentality of those who would support this most recent case of extremism:

These people are responsible for all the killing around the world this is a fact [sic].

Last Sunday vandals scrawled anti-refugee/Syrian/government graffiti on the walls of a Calgary junior high school. Messages such as, "Syrians go home and Die [sic]" and, "kill the traitor trudeau [sic]"really don't leave much to the imagination regarding the motives of the vandals and was of a violent tone which warranted inclusion in our recently updated "History of Violence" timeline.

Calgary police are investigating after the walls of a southeast junior high were once again sprayed with hateful messages directed at Syrians and Prime Minister Justin Trudeau.

Officers were called just before 9:30 a.m. Saturday to Wilma Hansen junior high school in the community of Queensland after someone in the neighbourhood reported the vandalism to police.

“We are still doing neighbourhood inquiries,” said Sgt. Kelly Todd, adding the incident could potentially be investigated as a hate crime...

Some of the messages include,"Syrians are animals,""real Canadians hate Syrians,""burn all mosques,""Syrians go home and take Trudeau," and "While Syrians feast in hotels, Canadians starve on the street, kill the traitor Trudeau." Windows in the school were also smashed out.

Much of the rhetoric mirrors language found on many of the ostensibly anti-Trudeau Facebook groups, (most of which seem to be primarily a means to target Muslim-Canadians and Syrian refugees) and PEGIDA Canada. For example, this post was made last week on Canadians Against Justin Trudeau: 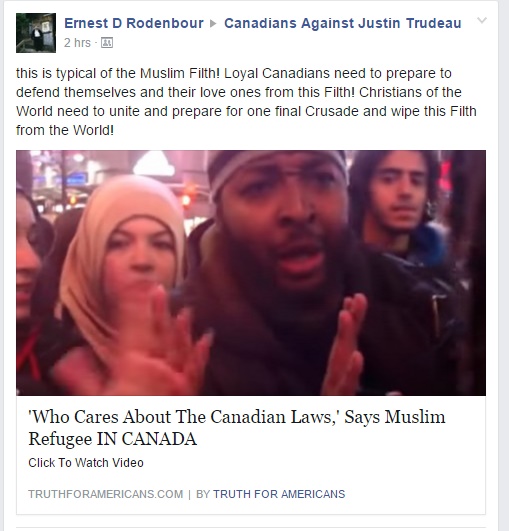 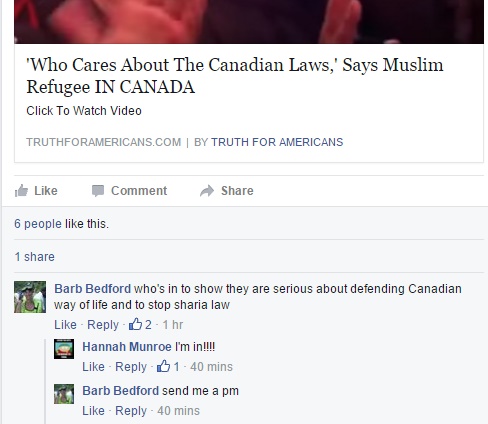 Regarding the most recent incident in Calgary, the membership of both Canadians 4 Canadians and Canadians Against Justin Trudeau is somewhat schizophrenic. On the one hand many celebrate the vandalism. Others don't like the damage but rather than condemning the individuals who carried out the act instead blame Trudeau (as self-described conservatives who claim to believe in personal responsibility, this is indeed a bit odd). Still others claim it is a "false flag" intended to make "white Christians"look bad and blame Muslims for the attack.... and also Justin Trudeau again.

First, the folks at Canadians 4 Canadians offer their $0.02: 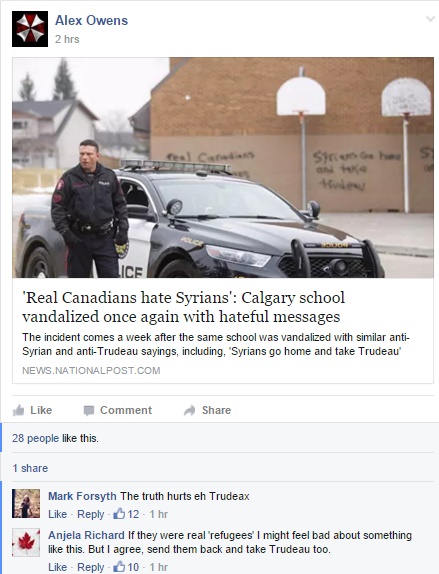 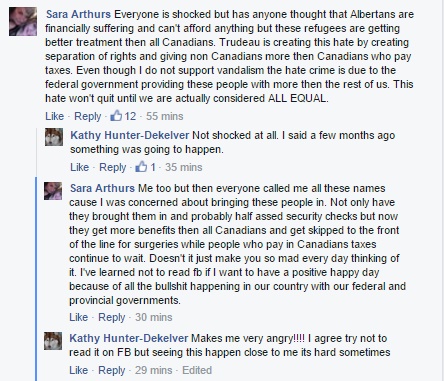 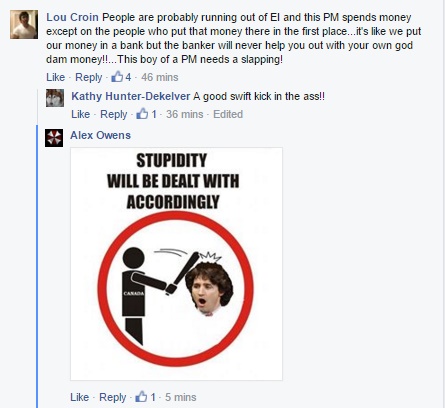 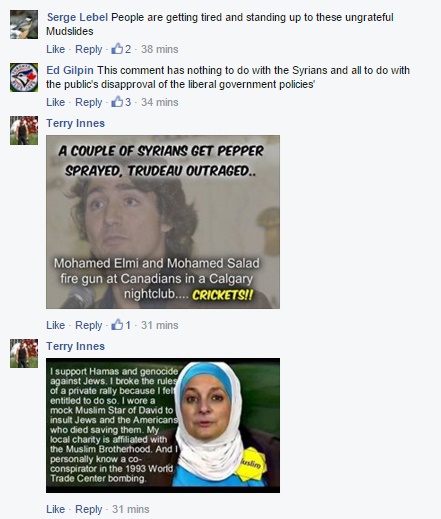 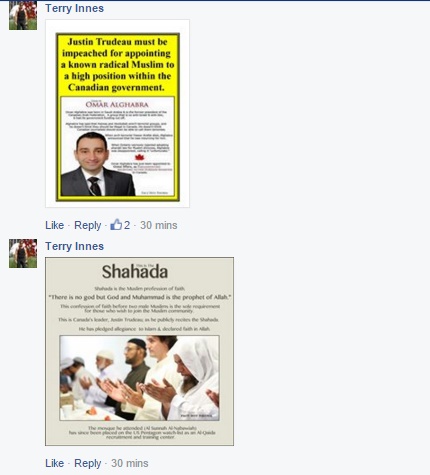 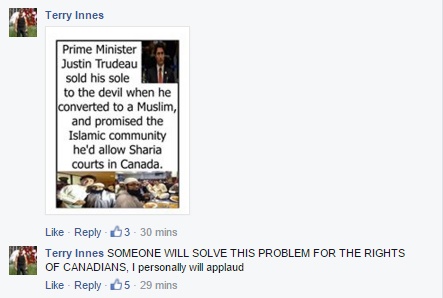 Later we checked out what those posting on Canadians Against Justin Trudeau had to say.

In short, mostly more of the same:

and in a second discussion: 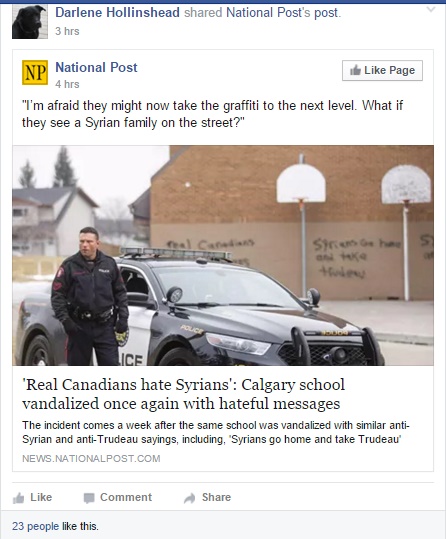 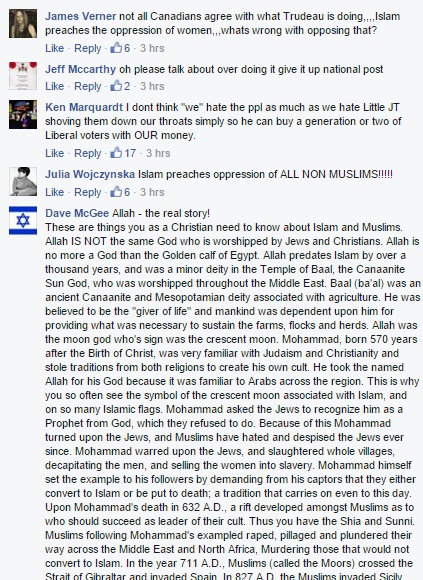 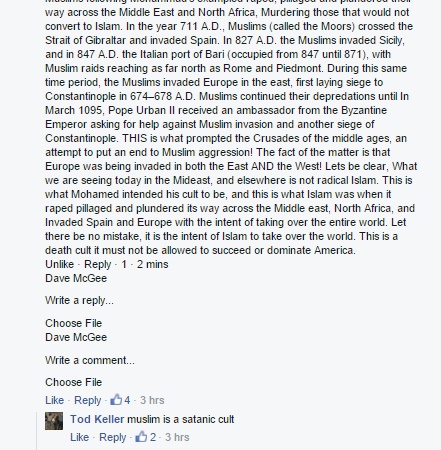 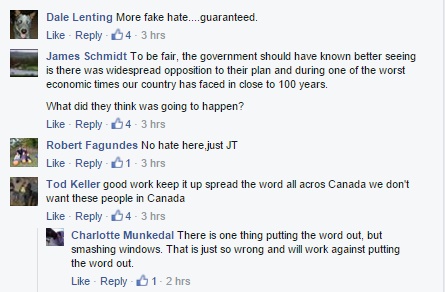 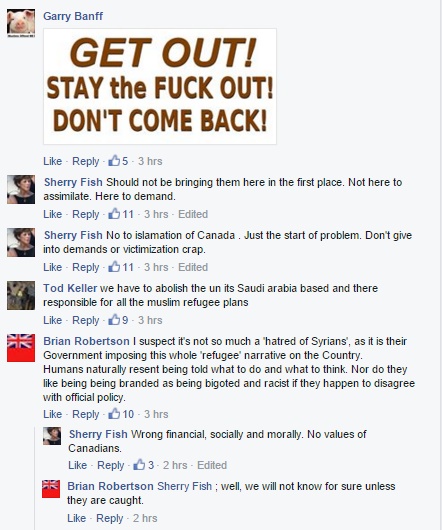 They've continued to post, but much of his is more of the same.

However, this part of the previous thread is rather enlightening: 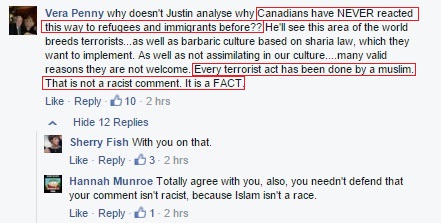 There are a few things to note in this in response. First and foremost is conflating the reaction of people who would post on Canadians Against Justin Trudeau as representative of all Canadians. While they might like to think otherwise, the extremism exhibited in these posts likely represents a fraction of a percent of the views of Canadians as a whole. Even most of those who have concerns with the refugee issue would recoil in disgust when reading the extremist and violent rhetoric found on sites such as Canadians Against Justin Trudeau, Canadians 4 Canadians, PEGIDA Canada, Never
Again Canada, etc.

Second, the claim that, "Canadians have never reacted this way towards refugees and immigrants before" and, by extension, there must be a good reason (form her point of view) is erroneous historically. We could discuss the reaction towards the boat people of the late 1970s and early 1980s. Jewish refugees fleeing Nazi persecution prior to the beginning of World War II. The rise of the Ku Klux Klan in Saskatchewan in the 1920s who, allied with the Orange Order, targeted Roman Catholics, the French, and immigrants from Central and Eastern Europe in the province as "unassimilable" and a "threat to the British heritage" of the country. And how about the response of Canadians towards Asian immigrants in the latter part of the 1800s and early 1900s? In 1907, race riots targeting Japanese and Chinese-Canadians resulted in significant property damage and injury to those who were the focus of rage, the so-called, "Yellow peril."

So no, Syrian-refugees are not the first wave of immigrants and refugees who have been so targeted by xenophobes. Sadly, they most likely will not be the last either.

Finally, the last claim that, "every terrorist act has been done by a muslim [sic]" is simply not a fact. The claim is even refuted by another member of the group: 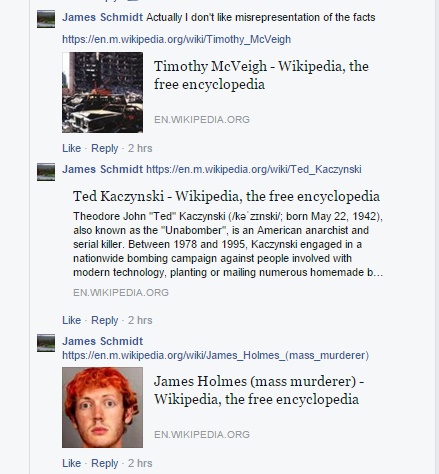 Had these acts been committed my a Muslim, there would be no question in the minds of these posters that they are acts of terrorism that directly reflects the "violent" nature of Islam. But as they were committed by non-Muslims.... well....

The reason for the difference? 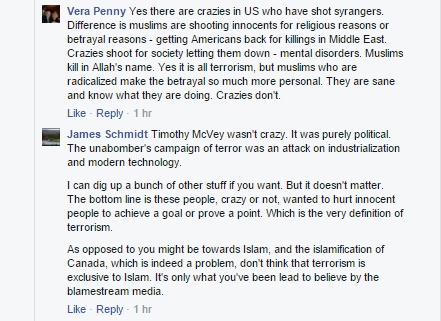 Non-Muslims/white folks who commit acts of violence = crazy anomaly and not at all reflective of the mainstream society.

Muslims who commit acts of violence = completely sane and fully aware of what they are doing and totally reflective of the mainstream of Islamic principles.

Interestingly, as noted in our previous article, there was a significant amount of what might be considered religious-based terrorist acts which we can trace to at least 1960 and extending on through the 1970s and up to 1980 in Canada.

They weren't Muslims though.

A second observation, still on the theme of Islamophobia, is the claim that Muslims are the only religious group (as if "Muslim" is monolith) to use violence which our readers will know is a historically ridiculous claim to make. Though it wasn't a part of our project, we were struck by the number of incidents in the Canadian Incident Database that puts the lie to that claim. Starting on January 27, 1960 and extending to the early 1980s, the Sons of Freedom engaged in a campaign of bombings focusing on both public and private property. Where the Son's of Freedom Muslim extremists? Nope. The Sons of Freedom were Doukhobors, a communal Christian community. And while they really did have some legitimate concerns the provincial government of BC and the federal government ignored, we're not sure that a campaign of bombing was the best way of seeking redress.

It's just the Muslims.

FEBRUARY 22 UPDATE: And just because they just can't seem to help both celebrating and justifying anti-Muslim/government vandalism while also accusing Muslims of carrying out, here is a new series of posts from Canadians Against Justin Trudeau and, in an interesting twist for self-proclaimed law and order conservatives, an attack on the RCMP for investigating the crime: 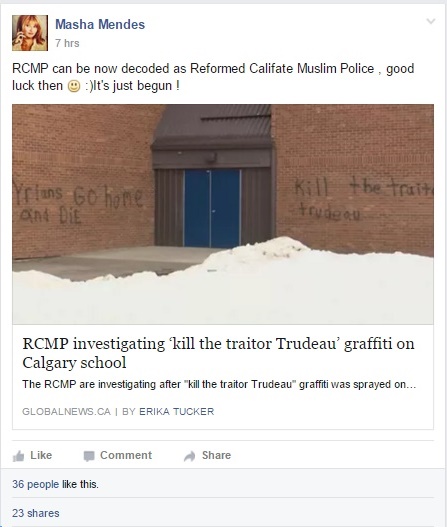 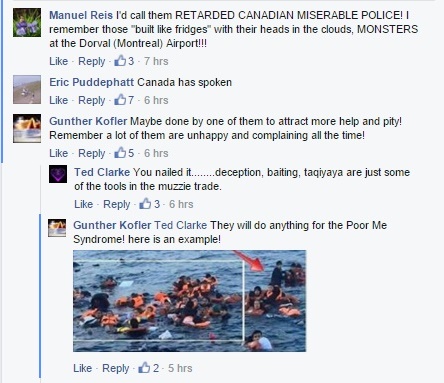 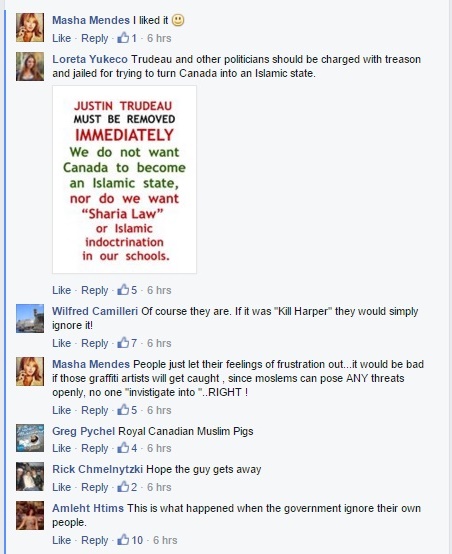 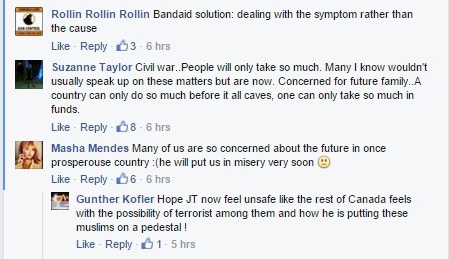 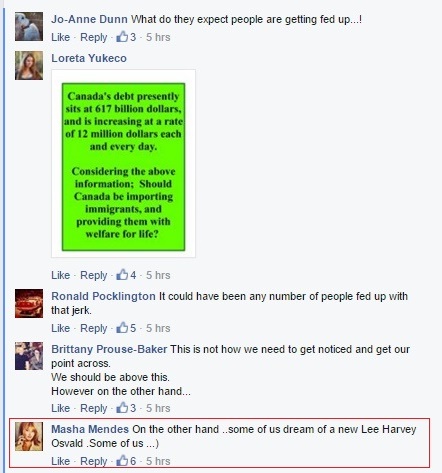 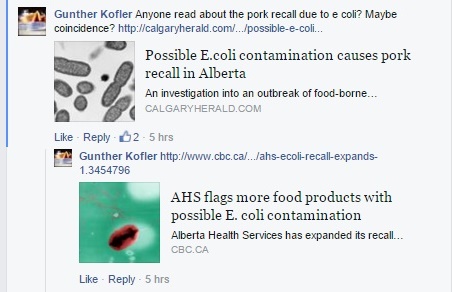 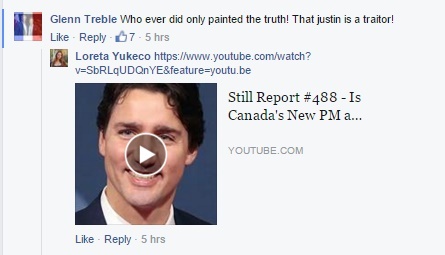 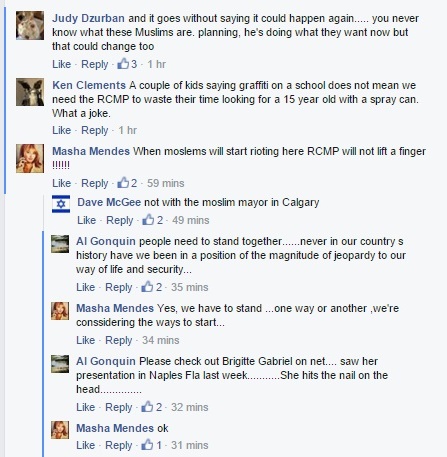 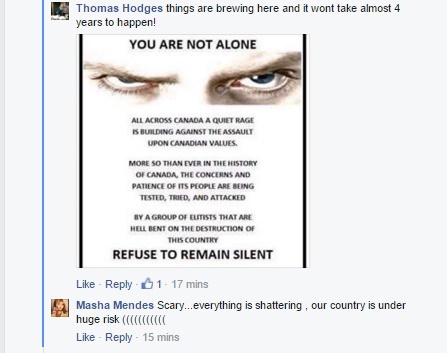 Then again, when they start blaming Justin Trudeau for someone's heart attack, it really does confirm that these people aren't exactly rational at this point.

No. Really. They blamed Trudeau for a man's heart attack. 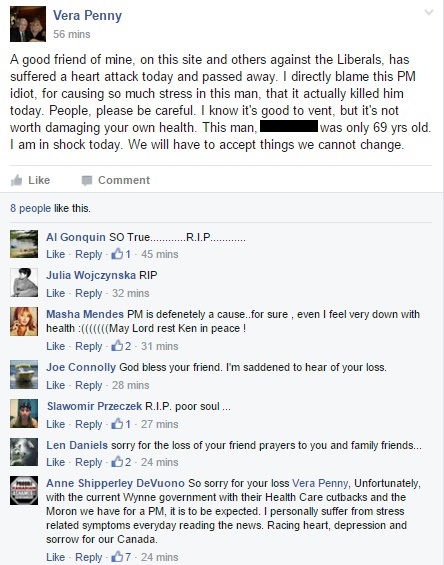 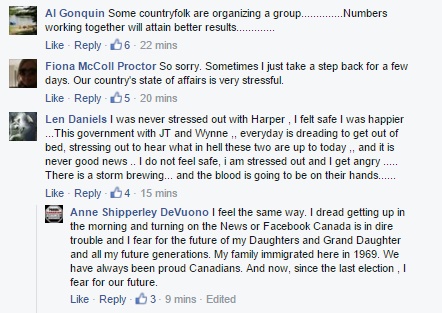