Well, to be fair it actually began on Monday. Still, here's an update of what has transpired thus far:

One of the leading members of the so-called Freeman on the Land movement is now acting as his own lawyer as he fights numerous drug and weapons offences.

Dean Clifford was arrested in November 2013 following a search of a property in St. Andrews. He appeared in a Winnipeg courtroom Monday for the start of his week-long trial.

RCMP allege that Clifford was in possession of marijuana and several firearms which weren’t licenced and improperly stored.

"I object to these proceedings in their entirety," Clifford said today in response to each of the 14 charges which were read against him.

Queen’s Bench Justice Chris Martin instructed the court clerk to record that as a "not guilty" position. That drew the ire of Clifford, who repeatedly insisted the federal government has no standing to prosecute him.

"I am here under extreme threat and duress," Clifford said. "I’m not representing any thing or being. I’m sorry the law seems to offend people around here."

Clifford was repeatedly warned by the judge to stop interrupting and be respectful of the process. He called Clifford’s position "absolutely wrong-headed and non-sensical."

Everyone in the territorial jurisdiction of Canada is subject to the Criminal Code," Martin explained. "The time for games is over."
...

It goes on to discuss two others who attempted to use the defence (who we remind our readers was arrested in 2013) that Clifford seems hell-bent on using; one of those cases is still before the courts and the other one fared poorly for the defendant.

Earlier today Clifford posted the following on his Facebook profile providing his account of the day's events: 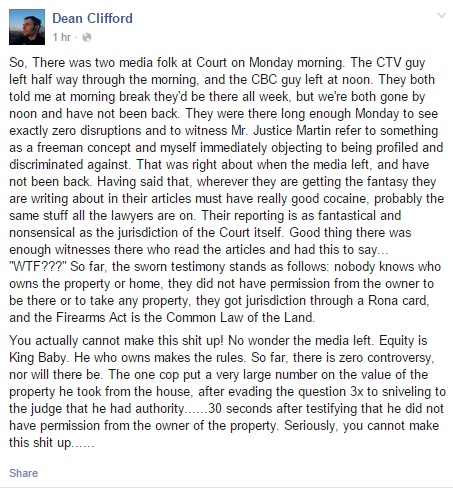 He seems hell bent on crashing and burning, but a earlier post made seemed considerably more, "woe is me.... and you're all a load of lazy, ungrateful, bastards" in tone: 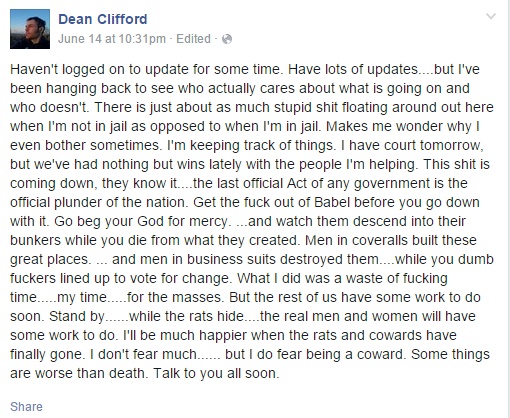 Now, things would be bad enough for Dean considering the ridiculous arguments he's likely using to defend himself, but the events of last week perhaps have made his life even more difficult. When Norman Raddatz's antisemitic and sovereign citizen beliefs he appears to have bought into became evident after the murder of the Edmonton police officer, a lot of Canadians saw the Freeman movement not only as a group of people making excuses for not paying taxes, but as a genuinely dangerous ideology. Clifford's own writings both in emails and on public forums such as Stormfront would seem to support this position:

On January 12th, Dean Clifford was found Guilty on 12 of 14 counts, and will spend 21 months in jail, after accounting for 13 months in custody. A lifetime ban on owning firearms, and submission of his DNA.

Narcissistic personality disorder is a mental disorder in which people have an inflated sense of their own importance, a deep need for admiration and a lack of empathy for others. But behind this mask of ultraconfidence lies a fragile self-esteem that's vulnerable to the slightest criticism.

Be careful of this conman, if you can even call him a man. he has caused harm to many people and is complete liar. you may want to distance yourself from this evil man. We have gotten word of some very heinous acts this piece of shit has committed. He is done.

He has scammed so many people out of their hard earned cash and delivered none of his promises to them. He has also tricked a women and her child to live on one of his "farms" where there is a pending investigation. this man deserves to rot in jail for the rest of his life.