Revisionism: It Ain't Just For the Holocaust

Any new photos of Paulie, you ask? Take a gander at this one: 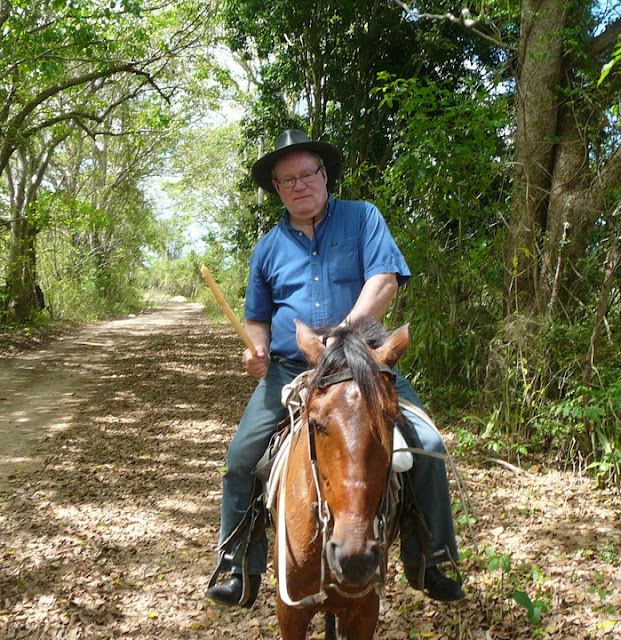 Why, oh why, do you make this so easy for us Paulie?

Now while we might think that this is yet another picture of Paulie trying, and failing, to pull off the rugged outdoors man look, he does have a new friend who thinks he embodies all the mythic hero of a Joseph Campbell archetype: 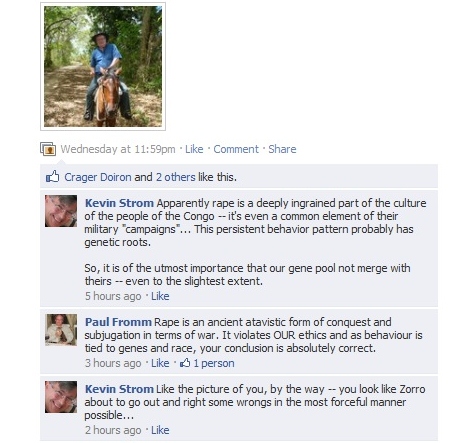 Well, Kevin Strom, formerly of the National Alliance and, after a huge falling out with the new leadership of the NA soon after the death of William Pierce founded National Vanguard, isn't exactly a new friend of Paulie as they have a pretty long history. And we actually are less interested in making fun of Paulie than we are addressing some revisionist comments made by both, er.... men.

It doesn't surprise us that Paulie would use this case to perpetuate the myth of the black sexual predator preying on white women. However we were interested in the discussion that took place as a result of Paulie's post and commentary.

Strom: Apparently rape is a deeply ingrained part of the culture of the people of the Congo -- it's even a common element of their military "campaigns"... This persistent behavior pattern probably has genetic roots.

Fromm: Rape is an ancient atavistic form of conquest and subjugation in terms of war. It violates OUR ethics and as behaviour is tied to genes and race, your conclusion is absolutely correct.

One would think that, as Strom is himself intimately aware of the nature of sex crimes having himself spent time in prison after being convicted of possessing child pornography, he might be more conscious that sexual crimes have little if anything to do with genetics or ethnicity. Paulie's claims are equally laughable.

Paulie is claiming that rape is an example of an evolutionary throwback. His argument is that some cultures are evolutionarily primitive and engage in barbaric practices that evolutionarily advanced, or superior, cultures have rejected. Mr. Ndayt, formerly of the Democratic Republic of the Congo where a brutal civil war has been ongoing for years and where sexual violence has been documented extensively, is simply the product of a primitive African mindset and the more advanced genetically humans (Europeans) should not permit this inferior genetic stock to pollute the purity of their race.

Or so the argument goes, which makes us wonder how he would explain this guy:

However, to accept as fact Fromm's and Strom's claims would be to ignore centuries of documentation that shows Europeans have used sexual violence as a tool of warfare as well.

Rape was commonly practised by both the Greeks and the Romans in antiquity. Women and children war captives were routinely sexually exploited by the victors. A favourite role model for WN women, Boudica of the Iceni, rose up against the Roman occupiers of Britain in part as a result of the rape of her daughters by Roman soldiers. Strom, with his love of classical art in mind, would be well aware of the "Rape of the Sabine Women" which commemorates a significant and celebrated, though perhaps not entirely historical, event during the founding of Rome.

In the Medieval era, another group favored by contemporary WN were well known for their brutality in warfare and are celebrated for it. The names, "Norsemen" and "Viking" are synonymous with raping and pillaging and were certainly involved in sexual slavery, selling capture women and girls for use as domestic servants and/or concubines.

Sexual violence was used as a weapon of war by both sides during World War II. German soldiers raped Jewish and Polish women and girls during the invasion of Poland; women in the Eastern Front were forced into brothels operated by the Wehrmacht. According some sources, as many as 10,000,000 Russian women and girls were raped by members of the German army. On the other side, the Soviet Red Army has been accused of participating in the rape of millions of German, Polish and other women as well. As many as 14,000 women in the UK, France and Germany were raped by American soldiers.

Even more recently, the war in the former Yugoslavia resulted in numerous accounts of sexual violence and forces prostitution. Although all sides of the conflict engaged in such atrocities, the overwhelming number of victims were Bosnian Muslims, and the overwhelming number of victimizers were Serbians. In fact rape appears to have been a strategic tool used to ethnically cleanse areas of Bosnian Muslims.

We could also discuss the accusations of rape committed by American soldiers in Afghanistan, as well as at least one conviction for rape and murder.

The sad fact is that sexual violence has been a part of warfare for thousands of years and it seems that no culture, past or present, has a monopoly on the use of sexual violence. If Strom and Fromm want to use the  Hilaire Ndayt trial as an example of how some ethnic groups are genetically predisposed to rape, then they're going to have difficulty explaining away the vile use of rape as a weapon of warfare by the supposed genetically superior Europeans.

Then again, revisionism tends to come fairly easy to these kinds of people even when presented with a vast amount of supporting proofs.
Posted by Nosferatu200 at 16:31

Behaviour is only very loosely tied to genes...most of it is based on social evolution/cultural evolution rather than actual hardcoded biology. We simply don't have enough space on our genetic harddrives to sufficiently hardcode every single human behaviour, action or reaction, choice, et cetera. To argue that someone choosing to rape someone else is genetic is downright ridiculous -- there is nothing genetic about it. That's why the arguments that criminals try and use that they're genetically predisposed to crime are bullshit.

Seriously, nothing is more irritating than stupid people arguing science. Unless you've spent years studying this, and I mean, actually studying, at you know, a university, working in the field, and you know, are not an idiot, seriously just shut up. There's so many different factors that weigh in on behaviour, and genes are such a miniscule, almost non-existant part of it.

The epidemic of rape in the Congo has more to do with dominance hierarchies which have almost no basis in genetics whatsoever, at least not in the sense that Paulie and Strom mean.

Regardless of what we like to think, we are all animals, no one race closer than the other, we are all simply and equally animals, and we do have dominance hierarchies in our own society, as well as a need to survive -- our survival instinct. So when competition for resources becomes strong, then levels of aggression increase and a desire to be dominant (and therefore have better access to resources) submerges. What is more dominating than raping someone? And the boneheads are fooling themselves if they think whitey is exempt from this.

I strongly suggest the boneheads arguing this pick up a copy of Paul R Ehrlich's Human Natures: Genes, Culture, and Prospects. If they can make it through the big words, it's an excellent primer on evolutionary theory, specifically from a geneticist's standpoint, but it requires an IQ above your shoe size to get through.