When were were reading other blogs, and writing our own article, concerning the JDL/EDL meet and greet that occurred last week, we came across another group touted by the Jewish Defence League (JDL) as also supporting the efforts of the English Defence League (EDL). The group, Canadian Hindu Advocacy (CHA), appears to be very small though it's chairman and spokesperson has claimed it is the only organization in Canada lobbying for Hindu concerns. In a CBC interview a few years ago, Ron Banerjee (who then lead the equally small and now apparently defunct Hindu Conference of Canada) affirmed his commitment to a tolerant and multicultural Canada:

Incorporating Hinduism into my adult life as a Canadian has been painless and natural. Hindus consider it to be a sin to impose our faith on others, so tolerance and acceptance of others in a multicultural society came naturally. Hinduism, with its numerous female deities, also promotes gender equality.

We would agree with this sentiment, and we can point to numerous examples of Hindu tolerance throughout history, however we are left wondering if Banerjee believes his own rhetoric based upon his own and other's statements concerning Muslims, Sikhs and Christians.

The presence of the CHA at the JDL sponsored event promoting the efforts of the EDL has been used to combat claims that the EDL is a racist organization (they have also contested the claim of racism based on existence of a Sikh EDL leader in the UK, though given his rhetoric concerning Muslims it may be a stretch to include him as an example of ethnic tolerance). In fact this isn't the first time the JDL and CHA have worked together. For example, in 2007 the JDL and CHA worked together in Newmarkert, Ontario regarding a mosque in the community. In recent years Banerjee has been a featured speaker at JDL events, some of which have been promoted by social conservative Christians like Mr. Kathy Shaidle: 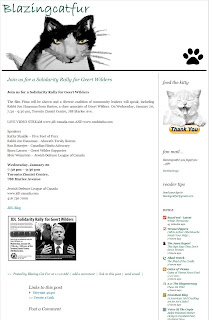 Later, BCF uploaded videos to his blog featuring his wife, Meir Weinstein, and Ron Banerjee among others speaking at the event promoted above.

A few days ago, CHA has started advocating for the banning of the kirpan (claiming it has been used as a weapon in Canada, though there is no evidence to support the claim), the Sikh turban, and "Islamic attire" in Canada as well as, "exclusion of [the] World Sikh Organization of Canada from public discourse."

In fact, Banerjee and CHA seem to have a hate on for the Sikh community that equals their apparent hatred of Muslims. While commenting on a Jonathan Kay editorial concerning Sikh extremism, someone claiming to be Banerjee (posing as hinduconf) posted the following comments:

Khalistan terrorist supporters infesting a National Post blog? The Hindu Conference of Canada represents and supports justice regardless of political affiliation. We hail & support Indira Gandhi's heroic assault on Khalistan terrorists, and the Indian Army's wonderful liberation of the Golden Temple in 1984. Indira and her Congress were always opposed by Modi and the BJP...so sorry, Singh, your spurious allegation that we 'represent' a particular political view or party is false.

We support all anti-terrorist acts, whether it be Indira's Congress govt heroically crushing Sikh terrorism or the Modi administration defeating Muslim terrorists. When the Congress party is correct (as in the 1984 assault on Sikh terrorists), we support Congress; when the BJP takes the correct path, we support them. We are always on the side of justice and righteous conduct, independent of political affiliation.

That's why the Hindu Conference of Canada is the sole Canadian Hindu advocacy...reflecting the moderate mainstream views of Canada.

You should know, Mr Singh, that we support the closing down of Ontario Khalsa Durbar and many other Sikh temples in Canada. And we are lobbying the govt to do just that. Real Canadians will no longer tolerate the presence of these hate factories in our midst for long. The Canadian military will at some point enter this Darbar, just as the Indian Army entered and purified the Golden Temple.

*****
To clarify, the Hindu Conference of Canada supports extensive police investigations into Sikh temples where terrorist ideologies are being preached and terrorist icons are being displayed. All such temples must, following investigation, be shut down for national security purposes... and because of the presence of possible terrorist forces in the premises, armed police and military must be used in the enforcement of these judicial orders. Canada must follow the example of democratic India, where in 1984 the Army was used to liberate the Golden Temple in Amritsar from Sikh terrorist forces...following extensive investigations and legitimate approval from the courts.

We hope to see a just replication of the 1984 Golden Temple action by Canadian military forces here in Canada. As a suspected site of terrorist activity, this Darbar must be a prime target in such investigations and possible follow-up military action.

*****
If only achieiving terrorist 'Khalistan' were as simple as flinging unsubstantiated accusations at moderate, mainstream groups like the Hindu Conference of Canada!

Here we have terrorist sympathizers accusing HCC of being a 'front for RSS' ... on a blog where we are lionizing Indira Gandhi and Congress (the blood ENEMIES of the RSS) for their heroic anti-terrorist acts at the Golden Temple!

Next, we are accused of being 'fronts for Indian intelligence agencies'...when we have consistently attacked the Indian govt for being soft on terrorism and hostile to Hindu interests!

Minorities in India are treated better than anywhere else in the world. Only in India can a Sikh be the PM, a Muslim the President, and a Christian woman pulling the strings behind the scenes.

The alleged 'killing of Sikh civilians' is a lie...these were legitimate anti-terrorist actions. No Sikh civilian was killed, only the terrorists died.

*****
Actually, Canada is very similar to India in that both are democracies, and also I know for a fact that in the not-too-distant future, Canada will treat Khalistan Sikhs exactly the same way as India does.
That is in fact one of the goals of HCC: to convince our fellow Canadians that there are too many Khalistani Sikhs in this nation, and that mass deportations (regardless of citizenship) of these people--the Khalistani Sikhs- is essential. We also lobby to have Khalistan-dominated Sikh temples shut down.

As I have suggested, we hope to see something like OPERATION BLUESTAR replicated in Canada. This should include rendition of suspects to India for interogation, armed assaults on Khakistan terror bases masquerading as Canadian temples (like Golden Temple attack).

In fact, if today's Harper govt were in place in 1984, we would see simultaneous attacks: Canadian military intervention against Khalistan Sikh temples here at the same time as the heroic Indian Army assault on the Golden Temple.

The event that Banerjee is referring to was the assault on the Golden Temple in Amritsar, India in 1984 that targeted Sikh separatists occupying the building. The assault on the temple resulted in the deaths of not only the extremists, but also at least 492 civilians, though this number is contested by some who claim 1500 civilians died, or by Banerjee who claims above that all who were killed were legitimate military targets. The assault on the Golden Temple was seen as a sacrilege by Sikhs in India and beyond and resulted in the assassination of them Prime Minister Indira Gandhi by her Sikh bodyguards. The reprisals against Sikhs in India resulted in mass expulsion and murder. Government estimated the numbers murdered in the reprisal killings at 2700, though independent human rights agencies place the number as high as 17,000. While Banerjee might claim the original assault on the Golden Temple was a legitimate means of dealing with Sikh extremists, it is very hard to justify the reprisal killings of Sikh men, women and children that occurred as a result of the later assassination of the Indian Prime Minister, yet he does claim this. In fact, in a letter originally published in the "National Post" he states the events of 1984 should be celebrated:

Before the 1984 anti-Sikh riots in India, Sikh terrorists carried out indiscriminate attacks designed to cause extensive civilian casualties, including derailing trains and setting off bombs in markets and restaurants. Moderate Sikh political leaders were assassinated for opposing the militants, while several others were killed as a result of militant group rivalries.

Threats were also made to the minority Hindu population so as to drive them out of Punjab. In fact, a large population of Hindus left Punjab permanently in 1980s. Democratic India's defeat of the Khalistan terror movement is one of the great success stories of our time, and key to this victory were the actions of 1984.

Far from being a "genocide" against Sikhs, as Liberal MP Andrew Kania wants to call it, the events of 1984 should be celebrated as a decisive blow against terrorism.

Others who claim membership in the Hindu Conference of Canada or it's successor the CHA are even more blunt in their view of Sikhs and Muslims: 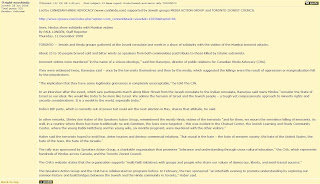 To their credit, the other posters on Free Dominion called out this member for his overt bigotry:

Oh, not the bigotry he expressed towards Muslims and Sikhs. It was his hatred of Christians that crossed the line.

Now, this could very well be the view of one individual who claims to be a member of the CHA and it's predecessor but who is a troll trying to discredit the organization. Sure, his posts are so over the top that we could buy that argument. So we did what some others haven't done and went right to the source. We sent an email to CHA asking, among other things, what for the position of the CHA on the persecution of the Christian minority in Orissa by Hindu extremists. The response we received from Naresh Patel mirrored the views of the above Free Dominion poster quite closely: