CdnRepublican: Too Extreme for Free Dominion?

We have to admit that as of early January we've become regular readers of the Free Dominion forums again after close to a year of infrequent attention. What can we say? We get a kick out of them, especially the joy some of the posters get out of us mentioning them on this blog (hi Shiva!).

Lately we've become especially intrigued by one particular poster over there going by the handle, CdnRepublican. His profile picture is that of a Crusader knight (specifically a Knight Templar based on the uniform) which really gives away a tiny obsession the fella has with Muslims.

Then again, saying that CdnRepublican is obsessed with Muslims is sort of like saying the last Grand Master of the Templars, Jacques de Molay, had a minor brush with a fire near the end of his life.

This dude has a hate on for Muslims that is off the charts.

As an example, when Muslim extremists targeted the Coptic Christian community in Egypt, CdnRepublican was quick to lump all Muslims together stating that, as they were not protesting this atrocity en mass, it was evidence that Muslims supported the bombings:

So, here he is demanding to know why no Muslims were protesting. Why none was demanding protection for their Coptic neighbors. His questions were rhetorical since he knew the answer already.

Then again, if evidence indicated that Muslims did do exactly what he wrote they should be doing, then perhaps he would change his mind? 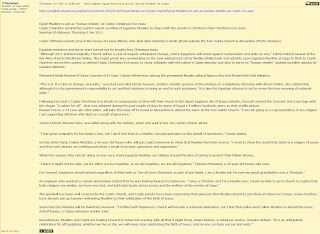 So, you would think a reasonable person might at least acknowledge the possibility that perhaps not all Muslims are nasty, dirty monsters. Sadly, CdnRepublican didn't even acknowledge our friend Ogopogo's post. Well, perhaps he missed it? We mean, there was such a huge time difference between posts:

Not to fear though. Another poster included another link later (and yes, we've been collecting some of these screen shots of a while now, but we didn't know we would use them until now): 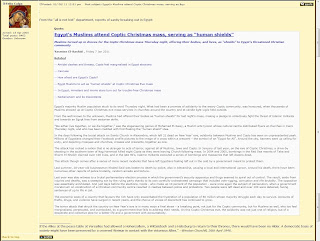 This time, CdnRepublican did comment. We're sure he was thrilled to learn that Muslims had heeded his call to action. Right?

So what we've learned is that, when Muslims do exactly what CdnRepublican says they have to do in order to be considered moderate, he dismisses the action and moves the yardstick further.

Another case in point. When Ogopogo posted an oped by a prominent Muslim leader who stated that it was the duty of American Muslims to participate in proposed Congressional hearings into militant Islam, he was fulfilling another requirement made earlier by CdnRepublican: 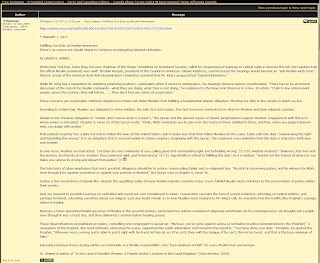 His response this time?

The last part is interesting. Basically he's saying the only way he'll accept a Muslim as moderate is if the Muslim rejects the Quran (that's sort of like saying that Christians and Jews are violent because the Torah contains some rather unfortunate verses advocating genocide) and stop being a Muslim. We suspect that, based on historical precedent, this wouldn't be enough for the likes of CdnRepublican either.

If our readers want to learn more about forced deportations for failure to convert, we suggest reading up on Spain in 1492. Chris Columbus getting lost wasn't the only thing happening on the Iberian Peninsula that year.

CdnRepublican has been ratcheting up the rhetoric for some time, but his latest might actually be the most extreme thing he's posted. In a thread dealing with racism, CdnRepublican posted his own call to action:

It looks like his inflamatory statements are resulting in a reaction though, as ordinary posters have started to call him out for his bigotry:

Even the Mark and Connie appear to be growing increasingly weary (and wary) of CdnRepublican, who has attacked other Free Dominion members personally for not being anti-Muslim enough for his liking. His thread essentially demanding the Fourniers create a new forum specifically for attacking Islam was met with near universal condemnation by those who posted in response, mostly because he was continuing his assault on Free Dominon user Shiva. Connie stated in response to his demand:

Why don't you put your "man pants" on and put your name on it? I'm really beginning to wonder about your motives.

You should start a website for that purpose under your real name, CdnRepublican. That way you can accomplish what you want without the indignity of having to hide behind other people. If you want it done, do it. Don't wait for someone else to do it for you.

Let us know how it works out for you.

And these were tame comments directed at CdnRepublican. Take a look at the others. We're actually surprised that CdnRepublican actually decided to show his Templar face on the forums again after the drubbing he received. We imagine that retention of dignity isn't a priority for him though.

Really, how nuts do you have to be that the members of ARC begin looking at Connie, Mark, EdS, Shiva, J.B. Stone and others as reasonable voices by comparison?

We actually have a feeling that CdnRepublican, though he's been a member since 2005 and has over 10,000 posts, is living on borrowed time as a Free Dominion member. Connie and Mark are obviously sick of his over the top pronouncements and bullying of other members. They've also grown suspicious that he's a plant trying to get them in trouble with the CHRC. No doubt this post about CdnRepublican will serve to confirm their suspicions that he's a sleeper mole who posts on Free Dominion to discredit them.

Hey, if that means CdnRepublican has a forum for his bile taken away from him, we'll happily take the blame or the credit, depending on your point of view.

The few times I have checked out Free Dominion he/she was one of the posters who most stuck with me. You sadly didn't get any posts of his/hers where he/she claims that any denunciations of extremism from Muslims is merely a case of taqiyya. I found that even better than the moving of the goalposts.