In an article we re-posted concerning the Canada wide arrest warrant for Craig Cobb, a request was made by the RCMP:

Anyone who has information on his whereabouts is asked to call their local police detachment, said Mounties.

He's in Kalispell, Montana. He's been active there for some time in fact.

Easy, right? After all that's where he has repeatedly said he was living. But if the RCMP doesn't wish to take our word for it, they could get in touch with Paul Fromm who met with and interviewed Cobb earlier this week: 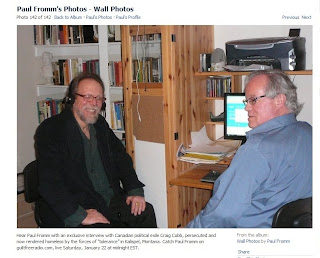 Keep in mind that Paulie has referred to Jamaican Canadians, Sudanese Canadians, Tamil Canadians, Lebanese Canadians, Haitian Canadians, Chinese Canadians, and Iranian Canadians among others as "Canadians of convenience" when they travel to their country of origin to visit family, but might ask for help from the Canadian government if something should go wrong. Or if they happen to come as immigrants or refugees. Or, well, really if they aren't White. But Cobb, a man who apparently spent 5 years in Edmonton (after leaving the American military) where he presumably received citizenship, but then who then left Canada soon after and didn't return for close to 30 years, is now a Canadian political exile.

Shall our dear reader speculate as to the reason why this is the case? We don't think it will be very difficult to determine the reasons for Paulie's distinctions here.

On a somewhat related note, we've come to learn that Craig Cobb, a man who has gone out of his way to offend people, partly by focusing on their outward appearance, is sort of thin skinned and self-conscious about his own appearance as he asks his friend and fellow, "White Nationalist" April Gaede (also living in Kalispell) to stop picking on him: 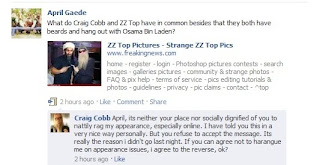 For our newer readers unfamiliar with Craig Cobb, we invite you to click on this link to read more about him.
Posted by Kurt Phillips at 15:07

So he likes to mock others for matters of appearance that they cannot control (like skin colour) but gets offended when he gets mocked for matters of appearance that he can (like looking like a hobo)? Interesting double standard there. Well at least he's not wearing that godawful leather suit in any pictures lately. Hopefully he was forced to leave it behind when "had to flee" Canada.

If Fromm visited Cobb and was aware the police were looking for him (two things that facebook posts prove), he's probably guilty of obstruction. If he assisted Cobb in any way than he's a party to Cobb's offense. Hope the RCMP think about that.

Gaede is the mother of Lynx and Lamb, right? Prussian Blue?

Anyway, perhaps the RCMP has too much to do, tracking down counter-terrism experts training in Waziristan :)

Looks like Crusty the Clown has got a haircut and about time , he was turning into saunta claus

Apparently he is trying to buy the town of Leith North Dakota and turn it into a white power town. Y'all should ask Obama if you can have him back to incarcerate. I think he would agree.