Paulie Dispells All Pretexts of What White Nationalism Really Means

People like Paulie always try to convince people that they aren't racists. They are White Nationalists and are simply proud of their culture. Certainly, they don't accept ideas of supremacy or, "White Power."

And then they actually slip up and end up telling the truth: 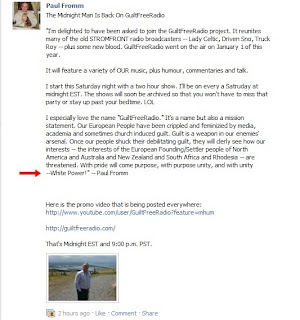 That Paulie has made friends with a fugitive from Canadian justice is another indication that he's really no longer even trying:


Venomous white supremacist Craig Cobb is in the U.S. taunting B.C. police as they seek to bring him to justice for alleged hate crimes.

Cobb, a shaggy 59-year-old racist, was arrested June 17 in Vancouver on suspicion of promoting hatred of blacks, Jews, gays and lesbians through a website called Podblanc he allegedly operated for about 10 months from Vancouver.

But because federal hate-crime law requires the provincial attorney-general’s approval for a charge, Cobb had to be released after his arrest at the downtown library, and he quickly fled south across the border, said Det. Terry Wilson of the B.C. Hate Crimes Team, a unit made up of officers from various police forces.

Crown counsel in B.C. laid a charge Dec. 30 of promoting hatred, and police issued a Canada-wide arrest warrant for Cobb — a dual Canadian/U.S. citizen — the following day. Wilson emailed Cobb a notice of the warrant. Cobb posted that message on his Facebook site.

“Get An Extradition Order, Chump Terry Wilson,” Cobb wrote by way of introducing the warrant notice. On his blog, Cobb addressed Wilson saying “you can find me in the orange easy chair near the elevator” at the library in Kalispell, Montana.

Police believe Cobb is in the northwest U.S. The fugitive has posted information on Facebook suggesting he’s in Montana, but that could be a ruse, Wilson said.

Cobb has a long history in the white-power movement in the U.S., according to the Southern Poverty Law Center (SPLC), a left-wing research group.

At the 2005 memorial for American civil-rights icon Rosa Parks in Washington, D.C., Cobb videotaped mourners responding as he called Parks a “s---skin communist” and said he was there to “celebrate her death,” the SPLC reported.

Cobb appeared with his video camera in March in New Westminster for a planned white-power rally that never materialized.

The now-shut Podblanc website had more than 1,000 channels, each directed by a different registered user, with content including combat handgun training, explosives-making, and details of security measures at three California synagogues, according to the SPLC.

The site’s most-popular video showed Russian neo-Nazis beheading and shooting Asian immigrants, with other videos showing Russian and eastern European skinheads punching and stomping orthodox Jews and non-whites, according to the SPLC.

In January 2009, 22-year-old Keith Luke told police in Massachusetts he’d been inspired by Podblanc and other white-power websites to go on a killing spree in which he murdered two black immigrants and raped and shot another, The Enterprise newspaper in Massachusetts reported.

Cobb spent three years trying to gather white-supremacist support in northern Europe, but was kicked out of Finland and Estonia, according to the SPLC. Wilson said Cobb arrived in Canada in August 2009 soon after leaving Estonia.

The U.S. First Amendment guarantee of free speech may make it impossible to get Cobb extradited to face the Canadian charge of communicating hatred, Wilson said. “You need to have a similar offence in the country that you’re extraditing from,” Wilson said, adding that he isn’t aware of any instances of suspects being extradited to Canada to face a promoting-hatred charge.

“If he sets foot in Canada, he’ll be arrested,” Wilson said.

Of course, thanks to modern technology, Cobb can keep up his work from anywhere with an internet connection.

Perhaps Paulie might have a word with his new friend and suggest that making threatening allusions to the shooting of congresswoman Gabrielle Giffords might not be a great idea. But hey, what do we know?

Maybe he'll mail cannabis seeds to Canada - then he can be extradited.