Paul Fromm Not a Fan of... Toronto Mayor Rob Ford???

This past October we here in the Collective watched with baited breath as Paulie, Tommy and Donnie were all trounced in their respective mayoral campaigns, which was completely expected (we were surprised that voter turn out in Mississauga, London and Toronto appeared higher than in the past). Truth be told we really were only paying attention to Fromm and Winnicki though, as we had experienced Don Andrews' dog and pony show during multiple civic elections in Toronto and, frankly, we were a bit bored by him. Besides, we knew that the Toronto race was going to be won by conservative Rob Ford and as most of us here are lefties politically, that sort of bummed us out a little bit.

Things took an interesting turn today however when Paulie posted a screed on both Stormfront and his own Facebook profile directed at the Canadian Jewish Congress, Rob Ford and the Ford for Mayor campaign. The focus of the screed centers around someone Paulie claims once worked on the Ford campaign (a Mr. James Alcock) but, because of his connection to Fromm and a planned speech to Paulie's Alternative Forum, was dropped as a campaign worker due to CJC pressure.

We don't know a great deal about Mr. Alcock at this point. From what we've been able to gather, he is associated to some degree with the conservative Toronto Party and is someone especially interested in mass transit and transportation. Mr. Alcock himself posted the following in the "Team Rob Ford" Facebook group:

We need to stress that there is no indication that Mr. Alcock himself holds the same bigoted views as does Paul Fromm, but the venom of Paulie's writing regarding the treatment of Mr. Alcock by the Ford campaign really does shine a light on the views that Paulie tries very hard to shield with a veneer of civility: 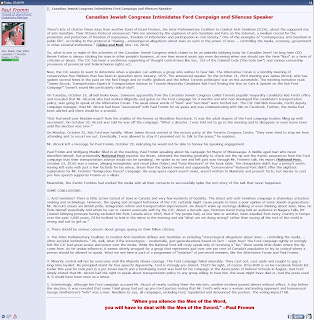 Paulie is very sensitive about the whole, "neo-Nazi" label that is often applied to the people he associates with. Sadly, the accuracy of the term as it applies to many of the people Paulie DOES associate with, and defends, is more than apt as evidenced by this most recent example: 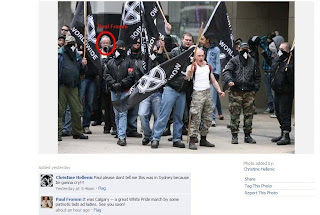 The young patriots Paulie is referring to in the photo are, of course, the Aryan Guard. If you are a new reader of this blog, why don't you click on the Aryan Guard tag found here or at the bottom of this article to see the other patriotic work they've been involved in. 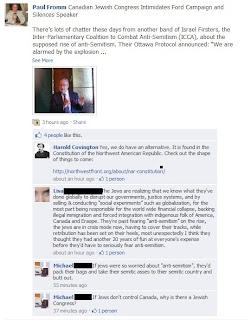 Hey! It's Harold Covington, yet another neo-Nazi friend of Paulie (picture of Mr. Covington can be found here).

If the shoe fits, Paulie.

Of course this leaves us in a bit of a quandary. We don't agree with Mr. Ford's conservative ideology, both fiscal or social, yet he want's nothing to do with anything that reeks of Paulie stank.

Perhaps Mr. Ford has risen a few degrees in our estimation?
Posted by Nosferatu200 at 18:39

This is not related to this particular article, but is related to an article you posted a few months back about Soultrean Hypothesis (sorry, didn't have time to dig back to that article).

Anyways, interesting article that may explain c1e, (or not)...

Seems to be another chip away from the Solutrean Hypothesis in my mind though.

Ofcourse you don't agree with Ford's conservative ideology... All of you are leftwing pinko retards :).