Oh, Kevin. You are the gift that keeps on giving.

Not long ago Kevin Goudreau responded to our most recent article in which we featured him. Suffice it to say, nothing in the article was complimentary. However that seems to have been part of Goudreau's master plan: 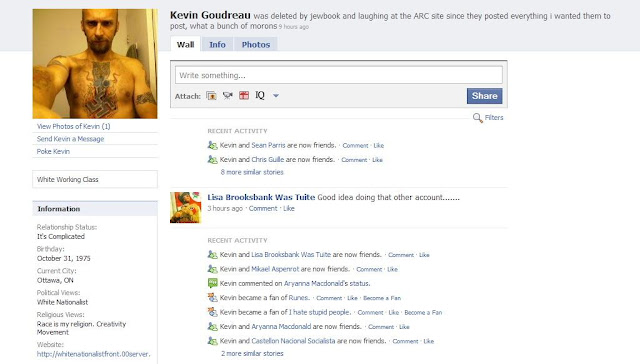 Does Kevin remind anyone else of the kid back in school who, trying to impress his class mates with some hair brained stunt, completely screws it up, falls flat on his face, then leaps up bleeding and says, "Ya, well, I meant to do that okay!" The reality is he's not very happy about us: 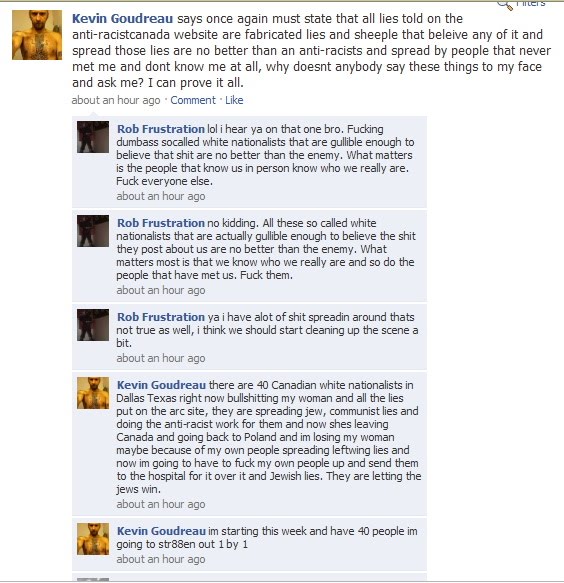 Problem for him is that we're merely quoting him, so if there are lies being told, he's the one telling them. No matter. 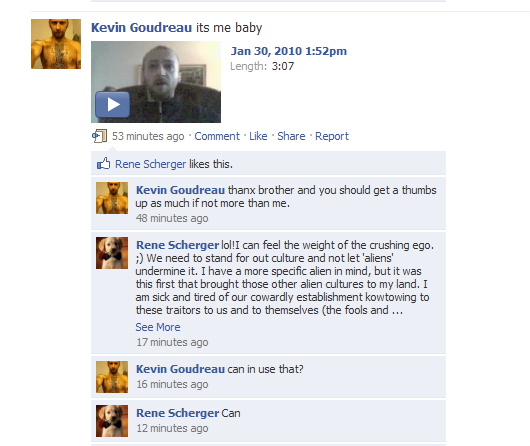 While the videos Goudreau created on his Facebook profile (one of which he uploaded 14 times) were lost when he had to recreate his profile for a 19th time (we have to say he's sure persistent) we managed to save them for our readers to bask in the lunacy that is Kevin Goudreau:

These videos are all a part of an effort by Goudreau to present himself and his "group" as a significant player in the Canadian racist movement. In fact, he goes as far as to claim that his "White Nationalist Front" is the largest such group in Canada (though we all really know he's the only member): 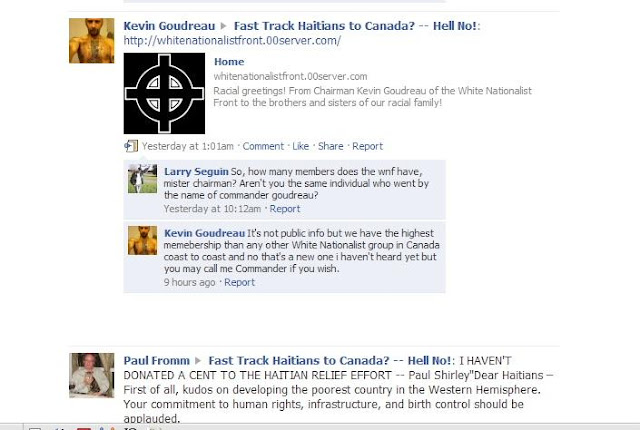 He's even stepping in to claim that the White Pride March in Calgary is not only going to be held, despite the collapse of the Aryan Guard (which still exists in remnant form as of right now) and significant trouble within W.E.B., but he will be the keynote speaker featured at the march. However, others are somewhat dubious about his claims:

The last comment was made by an out on bail John Marleau (bon89 is the username he utilizes on Stormfront) echoing a statement concerning the march he made earlier.

In fact Goudreau is rather infamous for similar lofty plans that don't amount to anything other than empty rhetoric. Last year he was planning on a big WN concert in Ottawa. He even contacted some WN and NSBM bands. But that was it. The bands he contacted were left hanging (no tears from us, mind you) and he blamed them for the failure to get a concert going. It seems that Goudreau feels he only needs to say he's planning something for it to actually happen.

It looks like even the racists are sick of Goudreau's schtick. In fact they're willing to publicly humiliate him to get their point across that Kevin Goudreau is a wingnut. To do so some are going back. Way back. Back almost two decades.

Back in 1993 or 1994, Kevin Goudreau (then 18) was a big talker who seemed to have gotten on the bad side of some neo-Nazis. Goudreau claimed he stood up against 15 Hammerskins. Others laugh at the claim. However the results of the encounter were not at all pretty. Want to know what Goudreau's nose is a bit crooked? 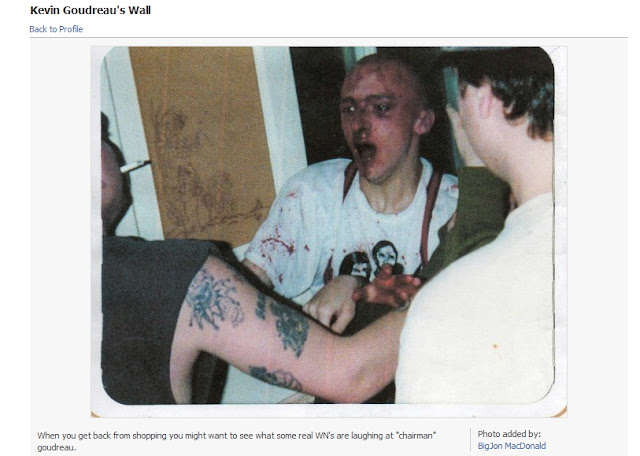 Ouch. Seems that he came out second best in that fight. We certainly don't sanction violence, even against the likes of Goudreau, but this picture does serve to illustrate a point we've made here on a number of occasions. If you run with racist gangs, you're far more likely to be the victim of violence perpetrated by fellow gang members than you are the average person of color that you'll ever meet or any anti-racist. In fact the racist movement is soaked in violence. Also illustrative is the reaction of Goudreau's fellow travelers: 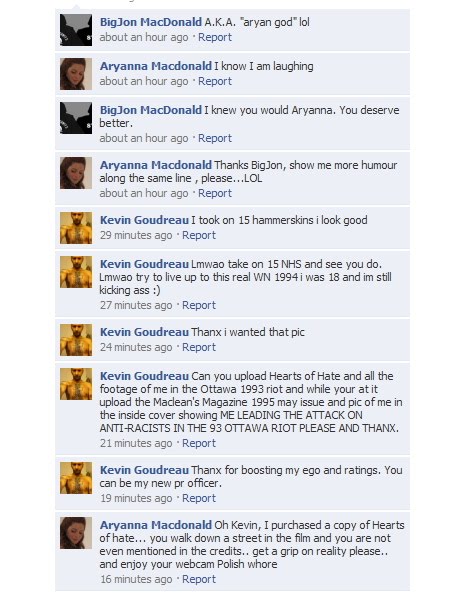 You might want to consider a less violent group of people to hang around with.
Posted by Kurt Phillips at 16:24

Dude is complete ass joke. Kev-boi, why don't you do something for your race, other than bragging about beating brothers up, apprently. Clown.

Wow... you're pretty tough aren't you, picking on the retarded kid. Tsk.

In addition,
I do feel quite bad for him, and I wish he'd just move on to strive for something worth while and let himself live well. He's been through A Lot, apparently.

I really hope and believe that something great can happen for this person...
And I also hope that what you're doing will, in the long run, do more good than harm. Cheers, with a cup of orange juice!

HAHAHAHAHAHAHA Some people still believe what this guy says. he threatened to kill me and many others yet...well...still waiting Kevin LOL

Since the white supremacist and/or racist movement in Canada has almost no public presence, what sense does it make for one faction to claim supremacy over the others?

I get the sense these people are stumped from the beginning by the very concept of supremacy.

I'm a conservative -- the future of conservatism lies in the challenge of selling that set of values to everyone, regardless of racial or cultural background. I think it can be done, because many of these groups are more conservative than liberal in social and economic terms.

The only reason that left-wing parties do well with Canadian immigrants is because they take some notice of their situations and address them. If the Conservative Party gets better at doing this, as they seem to want to do, then they will have a chance to share the immigrant vote.

Meanwhile, these white supremacist groups can share a fantasy, that they are better than anyone, because most of them have a long way to go to be even mediocre.

-- Peter O'Donnell, saying you don't have to be a chump to be a champ.

I sincerely hope someone is watching kevin's facebook right now

it's getting pretty entertaining

this poor guy is absofuckinlutely delusional.

by the way, the polish webcam whore thing is SUPER entertaining if anyone wants to read the 9000000 page fight between aryanna and kevin on her facebook.

i actually feel sorry for him! kind of. brain damage?

[Directed to the readers of A.R.C., not its author]

I feel really fucking bad for this guy.

And, in the process of everyone else's ridicule of him while he ridicules himself unintentionally...
Well, the true colors of the rest who point the finger at him are showing vibrantly as well.

Some of you talk about him not having any place in your movement... wherever your movement has been going, God knows! ...glug glug, oi oi.

It seems like he fits in with your confusing song and dance quite well, considering the collective demonstrations I've witnessed.

However, I still have faith that he can rise above and leave the squabbling for those who seem to love it so much.

I love how big of an attempt he's making at trying to sound intellectual in his videos lol. What a Douche!

That is just is funny side.
HIs "firends" just know another side of him.
A liar, a coward and someone a bit dangerous to himself and others.
Do'nt turn the back on him; never trust a Goudreau !