Guess Who's In Jail Now?

Left to his own devices, it sure as hell didn't take "Big Dirty" to screw up. Note the video as well. 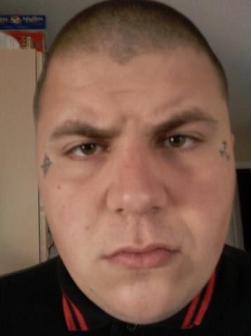 In late November two pipe bombs were left at the residence of a member of W.E.B., allegedly by Kyle McKee (founding member of the Aryan Guard) and a then 17 year old accomplice. At the time, another individual was suspected of being involved. John Marleau had been dating one of the targets of the pipe bomb but had broken up with her and she is now living with and dating the other target, Tyler Sturrup. The police initially arrested, then released Marleau and focused their attention on Marleau's friend McKee and the 17 year old, both of whom are currently in custody.

Looks like Marleau and McKee will soon be having a reunion of sorts:

CALGARY- Police needed a Taser to subdue a knife-wielding man who confronted a C-Train operator and officers downtown.

The incident happened at about 1:25 a.m. Monday, when a passenger aboard a C-Train on the 7th Avenue corridor pressed the emergency button.

When the driver used the intercom to ask what was the matter, the passenger said he pressed the button accidentally.

A few minutes later, the driver stopped the train at 7th Avenue and 4th Street S.W. to deactivate the button. Police said that as the operator entered the centre car of the train, a man charged at him with a knife.

The driver was able to run back into the front car, lock himself in the cab and call police.
Calgary police and Calgary Transit peace officers arriving at the scene found a man fitting the suspect's description two blocks away, on the 6th Street S.W. LRT platform.

Police said the man took a knife from his jacket and began waving it in front of him, ignoring commands from officers to drop the weapon.

An officer then used a Taser to disarm the man and arrest him without any serious injury.
After a routine assessment in hospital, police took the man back into custody.

John Richard Marleau, 22, has since been charged with three counts of assault with a weapon, and one count each of possession of weapon, carrying a concealed weapon and causing a disturbance.

Authorities are expected to release further details about the incident this afternoon.

We wonder if the rest of the boneheads will soon come to realize that Marleau is an albatross across their collective necks? We suppose Marleau now considers himself to be a P.O.W. like he does McKee.

We also wonder what information about the pipe bombing Marleau might be willing to provide to be used against McKee and the then 17 year old in order to keep himself from going to jail for an extended period, as he's already suspected in some quarters of having squealed already? Food for thought?
Posted by Nosferatu200 at 19:00

HAHAHAHAHAHA!!!! right on...too funny. The smell of bacon filled the air when the taser crackled right through him.

'John Marleau had been dating one of the targets of the pipe bomb but had broken up with him.'

John's a disgrace to his apparent European Heritage.

What the f*?
Was this man TRYING to go to jail?
I don't know what else to think...

Sometimes, people feel safer in prison than they do on the streets.

I really don't know what else to think about this!

...or
Sometimes, people need to find a way to get to the inside, and deal with matters that need to be taken care of.

Truly, I suspect that this man was in a sort of trouble, and reacted to that trouble in this way, as a choice between alternative repercussions, and that he believes he chose the better one.

Not that it matters, but I wonder if the ethnicity of the driver played a role in bacon boy's wig out?

I find the bacon comments to be offensive (to bacon). Bacon is a good thing, unlike fatass nazis....

He is going to hate the food. LOL They dont have a McDonalds. I would guess he will end up in Protective Custody.

Doesn't sound like McKee is protective custody, at least based on hearsay. Or if he is, it didn't protect him all that well. Word is McKee has already been assaulted in the remand centre.

If these asses keep up, we won't have as much fun come March 21.

does anybody feel like going to the jail with me and eating mcdoubles in front of john? but no sharing! the fat ass could stand to lose a few pounds.

Heffalump? I'd say he's more of a Puffalump (minus the cute). http://www.dirtybutter.com/GALLERY/gallery032006605.jpg

Wonder how Natalie feels about the fact that her boyfriend is 100 lbs soaking wet (with his boots on of course), and can't defend himself in jail. I bet he gets a taste for dark meat whether he wants to, or not.

This guy wants to walk around Calgary like he is tough shit? Obviously he can't handle it when it isn't some random person on the street alone, or a kid half his age. Really is sad, he clearly can't make it with the big boys in jail. Not too sure how he has lasted in jail in the past, but my money is on the fact that he will continue to get jumped, or someone will finally stab the guy, doing us all a favour.

What would be the cherry on that sundae, is if his girlfriend who is as mentally unstable as him, jumped off the nearest bridge. Not saying either should die, just saying......

Having actually stayed at the remand, if McKee's been assaulted in pc it was conducted by another inmate in pc, and it was likely planned because inmate movement is severely restricted in pc. You dont just go into pc and beat the shit outta someone. Being the tough guy he says he is, he was likely offered pc because of his WN status. Obviously that sort of thing doesnt fly at the remand. If he was assaulted in regular confinement, he is definitely in pc, as the powers that be dont want a repeat. Or do they? I say let the duece have him....

i love this blog and most of the comments, but i have been meaning to say for a while that it would be REALLY nice for me as an anarchist who works towards stopping ALL forms of oppression that

jokes, comments, and what have you could be kept to a minimum. such comments alienate and trivialize the discrimination faced by a lot of your allies and generally seem infused with a disturbing level of unchecked machismo.

if we're going to work together against oppression, then we are going to have to check our privilege and make spaces (even virtual ones) safe.

We understand the concern. We actually have limited some of those comments, but we let a few pass today after some discussion. Sometimes a difficult judgment call.

What can we say? There's a lot of people who really, really don't like Marleau.

i hate fascists, too. but i hate what MAKES them fascists. news flash: it ain't their body types. there's not really an excuse for being inconsistent and oppressive, no matter how much your target deserves it.

but thanks for the reply!

NOS: " What can we say? There's a lot of people who really, really don't like Marleau."

I wonder what Natalie's parents who are funding her college education think in regards to the recent actions by her circle of friends.

To the anarchist guy with the will to end oppression in general...

I'm definitely no anarchist, but I agree with you man.

i'm actually not a man!

NO MERCY, NO QUARTER FOR RACISTS.
and no, I have absolutely no problem throwing intolerance back at them. They shoulda thought about that before singing up under the swastika.

Okay i gotta say i'm no fan of these racist motherfuckers at all. However theres some harsh words bein' slung about here. These cats are obviously fucked up, and they obviously need to do some serious time, but that "Hate the hater, and rape the rapist" mentality will never make sense to me. Look, I get there is a lot of rage harboured towards these thugs, and i got it pent up too, i've had some up close and personal experiences with gangsters of all types and in a sense (even Marlau) these cats are small frys. I'm not sayin' they ain't dangerous i'm saying these guys talk hard and act hard, but when they are faced with the real hard motherfuckers who don't give a shit, those guys who will cut your hand off with a fucking machette and not bat an eye, they are no better off then the fuckin' rest of us. I mean, if you look at a man and hate him for his facist beliefs and wish harm to him are you not no less a bigot then he is? Is it even worth being offended by them? We know an African man is no less a man for being African, nor is an Asian for being an Asian, and so on, we also know a racist is a cowardly man, so why let them have the power to offend us? it just makes him a fucking idiot, people will believe what they need to believe, don't hate a motherfucker for being stupid, you can't avoid stupid people. But when push comes to shove, i hate them for being violent criminals, and predators, and for making that asian student who's just getting by on a half-assed scholar ship and a low pay job at some shitty bar fear for his safty when he walks home at night, or the Indian man whos lived here longer then they have feel like he has to watch his back all the fucking time cos' of these ass holes. But what it comes down to, is you can't fight violence with more violence, it just doesn't work that way, same goes for fighting hate with more hate. So if your gonna hate em, hate em, but hate em for the right reasons, in the end if you treat em like something different then the average criminal, your workin' backwards on yourself cos' that will give them more power then they deserve to have. So, Cheers, thanks ARC for keepin' us in the loop. These guys needed to go away and i'm glad their slammed in. But hey, i don't wish rape on anyone. Peace for now.

Word to the motherfucker

slinging intolerance back at nazis by using irrelevant criteria will only alienate your FAT, QUEER, WOMEN, SEXUAL-ASSAULT SURVIVING allies. use your brains.

Not really reading any new info. Starting to really think Johnny "Cheeseburger" Marleau was your leak.