We've written about this guy in October 2008, but he's back on our radar again.

William Grosvenor has been a problem for a lot of people for decades now. Considering the multitude of libelous statements Grosvenor has made about as many public figures during that time, he might just have also have approached Francis Dec levels of kookery (we just learned about Dec a few days ago and plan on trying to make a reference to him as often as we can).

Grosvenor eventually decided to go after Richard Warman as well. Guess what happened?

For those who think that ‘anything goes’ on the Internet, an Ontario, Canada Superior Court firmly disagrees. This week, Judge Lynn Ratushny ordered William Grosvenor to pay human-rights activist Richard Warman $50,000 in damages for malicious postings he made on the Internet.

Among other things, Grosvenor accused Warman of being a pedophile; he threatened to kill him; and posted Warman’s photograph and maps showing how to get to his home. As part of the ruling, the judge ordered Grosvenor to issue a retraction of his defamatory comments, to remove them from the Internet and to publishing nothing else that is defamatory or incites violence.

Warman was targeted, apparently, because he has a long track record of pursuing human rights complaints in Canada for what he sees as hate speech online. A lawyer for the federal government, Warman has launched 20 complaints and never lost.

In the world of daily newspapers, publishers are held liable for what the publish. Libelous stories can lead to major lawsuits. In the world of discussion forums, owners of sites are also publishers and are subject to the same kind of laws. It drives home the importance of making sure online forums are monitored appropriately for obscene, threatening or defamatory comments.

Considering Grosvenor's own homophobia and antisemitism as expressed in his online ramblings, we suppose it isn't a surprise that he went after Warman, but one would think that a $50,000 judgment might cause even the kookiest of kooks to rethink his approach. Ha!

Below is copy of the latest Ontario Court order dismissing Grosvenor's attempt to appeal from the dismissal of his 'first' appeal. This was again dismissed with solicitor-client costs.

Yep. He's was appealing the dismissal of an appeal: 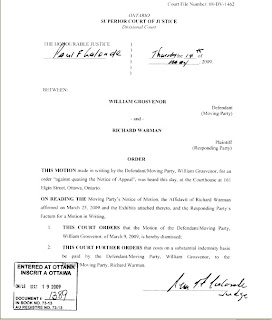 Enforcement proceedings related to the original judgment in Alberta is ongoing.

More on the long history of Grosvenor's involvement in the legal system:

Email ThisBlogThis!Share to TwitterShare to FacebookShare to Pinterest
Labels: Grosvenor

So I guess we're even now.

I shall redouble my efforts.

Naw. I think you're at least one up on me. I'm just merely catching up.

hey there a loyal reader here and I thought that I would write and ask a question in regards to the band Burzum. When you do a google search on them you find out about the White power thing with Varg Vikernes. I was trucking thru HMV the other day and I saw that they carry this? I sent an email to HMV Canada with a link. Do you think I was over re-acting to this or being proactive?

By all means, keep it up! Corporations should be held to account for the merchandise that they sell and you, a customer, have every right to voice your concern.