Oh, Kevin Goudreau. We wish we knew how to quit you.
Don’t worry dear readers. The tenuous connection between low level bonehead Kevin Goudreau and the the Macdonald v. CBC/Kinsella trial will occur soon enough. Please bear with us for the time being. First the meat, then the desert.
We’ve been following the defamation trial of Warren Kinsella and the CBC that was filed by Ian Verner Macdonald for the better part of a week now. Even though the burden is on the CBC and Kinsella to show that the factual statements made in the Kinsella interview were true and the rest fair comment, it seems that Macdonald in his cross-examination came across as pretty much what the allegations about him put forward, thus helping the defense's case more than his own. If one had to compare this case to a similar trial, it would perhaps be best to compare it to the v. Lipstadt trial where bravely running himself upon his own sword in a Romanesque suicidal act of, “they won't push me around” bravado. Perhaps the comparison is even more appropriate here since Macdonald's revelation that Mcquirter the KKK leader gave him an SS sword in thanks for letting him flop at his places in .
Happily, we’ve had someone who has intimate knowledge of the proceedings. Having witnessed some of the testimony, our source has said that, thus far, nothing she has heard has led her to think, "that evidence/testimony looks like it could cause problems" for the defense. In short, it doesn’t look good for Mr. Macdonald. Still anything could happen.
Our source also noticed something else which in light of BigCityLib’s article on the trial seems quite interesting as well. She said that the trial is actually vaguely pathetic. Doug Christie, Ian Macdonald’s lawyer, often leaves Macdonald alone a much of the time. Macdonald tries going over to talk to Kinsella and the lawyers for CBC and they have to politely tell him they can't really talk to him.

Now, Goudreau.
We all know that Kevin Goudreau is full of it (he claims to have "led" the assault on anti-racists in Ottawa in 1993 which led to the assault of his now girlfriend), so take what he says with a grain of salt. However, he claimed on his Facebook profile yesterday that he attended a meeting held by Doug Christie, Paul Fromm, and Ian Verner Macdonald: 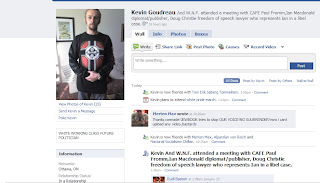 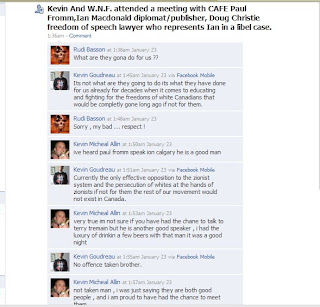 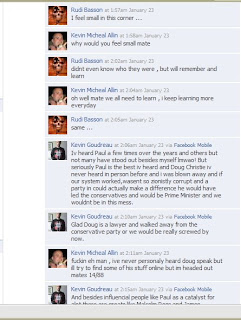 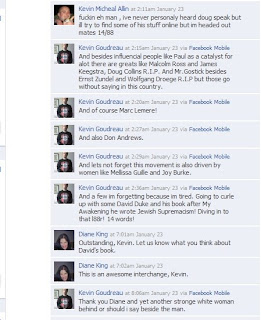 Now, one would think that if you are trying to claim your reputation has been damaged by being linked to Nazis, you might do all you can to avoid being in the company of Nazis, particularly when they make comments such as this: 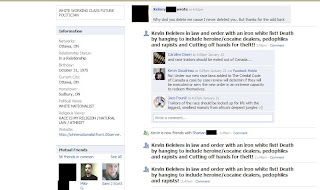 And while we're sure that Goudreau will be tickled pink that we've mentioned his name again on this blog, we're not so sure how happy Christie, Fromm, and Macdonald will be.
On an unrelated note, what kind of White Nationalist collects African Art? 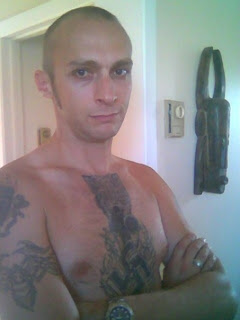 We're taking bets. While the mask looks to be of West African origin (a middling example but not unaesthetic in its construction) we aren't sure of it's specific origin. Would you say it is Ivorian or Malian? ;)

haha looks like someone needs to hit the gym, he makes kyle mckee look scary