We know what you're thinking. Not ANOTHER Aryan Guard story. Bare with us for a moment

We reported earlier that a member of the Aryan Guard was involved in the assault of a young Japanese woman in Calgary in July. Since the individual in question is 17, we will not report his name.

A Japanese visitor recalled Tuesday how she was talking on a cellphone outside a downtown bar last July when a man wearing combat-style boots suddenly began kicking her.

The man, she said, kicked her in the head, back and knee in what police believe was a racially motivated attack by a white supremacist.

The 17-year-old accused is on trial at youth court for assault with a weapon, assault causing bodily harm and three counts of breaching probation from previous convictions. He cannot be identified because of his age.

Asako Okazaki, 26, who had been in Calgary only a few months at the time of the attack, said she was walking home when she felt a sharp, sudden pain in the back of her head.
She turned to see a "unique" male sporting a Mohawk haircut, black satin jacket and baggy, military-style pants as he prepared to kick her again.

"I saw him there, likely preparing a second attack,"Okazaki told prosecutor Karuna Ramakrishnan. "Probably my body's reaction is self-defence. I turned back to look at him."

The attacker, she said, swore at her three times.

"I was getting advice from my friend on the phone," she recalled. "I said 'Really, I'd like to punch this person,' but I'd suffer the consequences."

Okazaki said she had to take painkillers for several days for headaches and injuries sustained in the attack.

A former friend of the accused testified Tuesday that the teen is a member of the Aryan Guard, a white supremacist group.

The witness, who can't be identified due to a publication ban, said the two had been drinking together in a bar on the night of the alleged attack.

Despite the protests of defence lawyer Jim Conway over references to the accused's association with the Aryan Guard, Judge Gordon Burrell allowed the Crown's questioning, saying it was relevant to the issue of motivation.

The witness, who can't be identified due to a publication ban, told court the accused became angry when an Asian woman bumped him with her chair in the bar.

Outside, the teen was "drunk and angry" when he attacked the victim, knocking her to the ground, the witness said. He then kicked her at least five more times, he said.

"He was aware what he was doing. He planned it out before," said the former friend.

"He smashed his glass, said, 'Let's go for a walk.'Obviously, he was trailing this person."

The witness said he now fears retaliation from the Aryan Guard following his testimony.

"The Aryan Guard is going to want to kick my head in," he said. "There are some people trying to find out where I live."

The fledgling neo-Nazi group has gained a foothold in Calgary since its founding in late 2006. It first gained attention the following year when members distributed flyers targeting immigrants.

It has also conducted public rallies, but is usually vastly outnumbered by anti-racist activists.

Photos on the group's website show members celebrating Hitler's birthday, raising their arms in a Nazi salute and decked out in neo-Nazi gear.

The accused, who was arrested more than a month after the downtown incident, was refused bail in October.

We were wondering it a spokesperson for the Aryan Guard, a group that claims to be merely a White civil rights group, would care to comment on this story? In fact, since they've known about this situation since July, why they haven't condemned the actions of this particular member? Perhaps because they support what he did?

On this individual's Facebook profile he wrote one final status update before heading to jail:


"There is nothing, but the cause."

And here are some of the comments posted by his friends, including Dustyn Johnson (Schutz Staffeln): 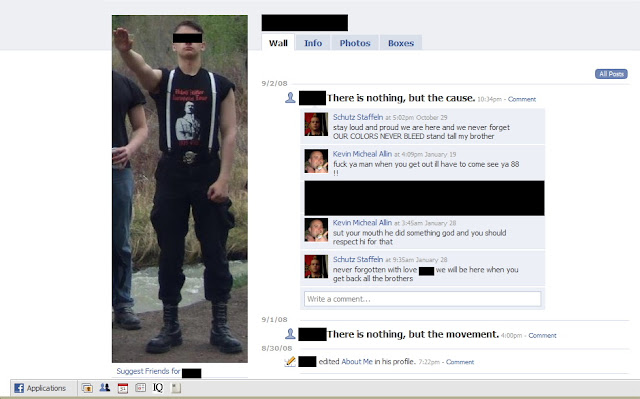 So, the Aryan Guard opposes violence, does it? Oh, wait, they finally changed their "Activist Values." It seems that the Aryan Guard opposes "unnecessary" violence and are for it as a means of self-defence. We guess that means they viewed this one, petite, woman to be a terrible threat to their security.
Posted by Nosferatu200 at 17:34

He'll get his, eventually. And why not mention his name with THIS AG update, you did before.

Yes, we did. However at the time we were under the impression that he was 18 at the time he is alleged to have assaulted the woman. As he's in fact 17, we need to be more prudent. As a result we have edited the other articles that contain this individual's name.

I'm still perplexed as to why the press and the pigs continue to refer to the AG as a white supremacist "group" rather than what they are, a gang.

Here's hoping the witness seeking protection will get it. Can't say the same for a lot of anti-racists in Calgary who the cops have actively tried to out.