Well we've had about all the turkey and Christmas cheer we can stand. How about a few updates?

First, we mentioned in an earlier, though now archived, article how the Aryan Guard may have stolen their Activist Values from Volksfront International's Ideals and Values page which considering the hostility between the two groups is more than a bit ironic(see here and here). Well Bill Noble, who we have to mention once again has not yet been returned to prison for flagrant violations of the terms of his release, has an explanation: 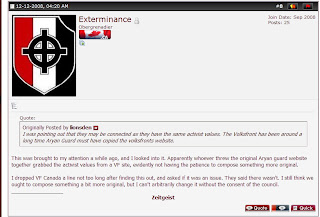 Noble is walking a pretty thin line here. On the one hand while the Aryan Guard (or what is left of it) is engaged in a war of words with Volksfront, Noble himself is friendly with a number of people in or associated with Volksfront in one way or another (Todd Conroy, Ciaran Donnelly, Glenn Bahr). Trying to keep the peace between two angry pitbulls that hate each other. In fact, we wonder what the Aryan Guard members think of Noble's frendliness with members and/or associates of Volksfront, the "A" brothers notwithstanding (though one source close to both D.A. and E.A. say that neither are members or are linked to Volksfront). Add to this he had to make this post on the Combat18 message boards, a group violently opposed to Volksfront, and justify plagiarism. Finally, he casually throws RN, who was the first webmaster of the Aryan Guard website before his own legal issues under the bus. How quick these people are to pass the blame on to someone else.

Now, on the Free Dominion front you'll notice in the article on December 12 discussing Connie's revelation she might be in a wee bit of trouble concerning Richard Warman's lawsuit against her, her husband and FreeDom itself that the link to the article is no longer working. We suspected the reasons, but Connie was kind enough to post a link to the letter she received from Mr. Warman's lawyer. Even though Edward Kennedy is mentioned by name in the letter as one of the individuals advocating violence be used against Mr. Warman, he continues to post inflamatory messages:

My comments come from a self identified individual, MYSELF, and have nothing to do with Constance or Mark. My name is there, and anyone with Grade 1 computer skills can find my address. My comments are opinion and as to malice, as defined, "desire to inflict injury or suffering on another", I suggest crybaby et al look at what they are attempting to do as qualifying to that same end. I am guilty of malice for sure when I consider the actions of a wife beater, human trafficker, rapist, pimp, etc. That crybaby's legal counsel has lumped him into the same category on my malice list says a lot about what they think of him.

Thus they are in essence guilty of the same.

I never could stand cowards, liars, or other miscreantic types. If my posts are read, and I am sure they are by the other side, crybaby should thank me for the warning as I HAVE heard/witnessed others say things with INTENT that would make him very uncomfortable. Crybaby et al do not like to face the reality of real intent, hatred, anger, and even murderous intent that his actions are generating among freedom loving people. There are always consequences to wrongdoing, and those consequences do manifest in real life many times. Much as I am despised by the other side, there is a big difference in why. I stand for freedom of speech, justice, truth and democracy, and it only stands to reason that those opposed to these values would hate me. What does crybaby et al stand for? Need I elaborate, and what tactics does he use? Is it any wonder he is hated to the point where he fears for his life.

Welcome to the club crybaby, I am pleased to live with the death threats, threatening mail, defamation, etc that comes with the territory. You have also chosen the same only you do not like the territory and treatment. I could die for my beliefs and defence of what is right, good and true. Is it not logical to accept the truth that you could also die for what you are doing? Question is, if it came down to it, would you be happy to die for your beliefs and what you are doing? I would. Or would you/do not you want to die at all?

I think there are some things worth dying for, and freedom is one of them. Do you think that what you are doing is worth dying for, especially when you cannot take criticism? Whenver I get a threatening letter, or death threat, I do not make a big deal of it, or grandstand, or run like a crybaby to the nearest lawyer, I just "gird up my loins" (like God puts it) like a man and go ahead. Why do not you do the same?

Perhaps his side would do me the dishonour of contacting me and deal with me PERSONALLY and TELL me where I am guilty of "malice". Then tell me where I am guilty of being a bully, or lying, or anything bad. Truth of the matter is there are only one of three sides to take, the right side, the wrong side, or the Canadian side, and I know sure as bloody hell I am taking the RIGHT SIDE!

At this point in time I am starting to feel sorry for crybaby, as I do not think he has counted the cost before embarking on his campaign. He will find it is lonely at times and may think in the end it is not worth it. I never feel that way because I am sure I am doing what is right. I realize I am rough, and passionate about all aspects of my life, but that is me and I am not about to have anyone tell me I must modify my behavior to not offend the essence of sensitivities of others.

However, I am obliged to attend unto the wishes of Constance, and if the other side has any problems with me, CONTACT ME, EMAIL ME, CALL ME, OR VISIT ME. I would be pleased to meet with ANY of them and would even arrange it in the company of a MELT member at a local detachment for their peace of mind. This is between them and I, not anyone else.

I am a big boy, responsible for my actions. Gladly.

and, in response to the message, "the best way to treat a snake is not to step on it,"

If they are venemous, no problem if you step hard on it's head and rotate your foot ninety degrees. Fangs, exoskeleton, skin, all dissolve into a harmless mush.

BUT MAKE SURE you do it right or you will suffer terribly for the error.

One wonders why anyone would be so daft as to think they can kick at anyone with impunity and without a backlash. Lieberals are so damned whiny and such crybabies, and if they have to learn the hard way that a swing at someone will get them a backhand in return, so be it.

Yet another system stooge who thinks that he can abuse others and then hide behind the system, and takes offence at anyone who draws him to the reality of the old saying, "what goes around comes around". Wake up time, as my late uncle always told me and warned me, "there are a lot of people out there who have no use for the law and will stop at nothing to even the score." It does not matter who and what you are, step on enough toes and you will eventually pick the wrong ones to trample.

But lieberals think theyb are immune, they think they can get away with anything and have nobody to be accountable to. Big mistake.

Now Ed Kennedy mentioned that he is a self-identified individual. But he wasn't always. Mr. Kennedy once posted messages on FreeDom under the name, "backwoods." Would our leaders like to read one of his messages when he posted as "backwoods?"

Typical nigger behavior. Concealed carry would have made the outcome much different. Note if the perpetrators had been White, they would have all got the death penalty for a hate crime against niggers.

And the lieberals wonder why a large segment of Whites hate blacks and distrust them. I am surprised the black bastards did not try to rape them, that is standard fare for niggers.

As BigCityLib said in a a post from March 24, the Fourniers don't help their case when they allow people like Mr. Kennedy to continue posting messages on their website.

That's all from us for now. We would like to wish everyone (well, almost everyone) happy holidays.

Wow how do you on one hand rip a bunch of boneheads like volksfront for not being "Real Nationalists" and then steal all their "ideals and values"??
The aryan guard prove not only are they a bunch of violent drunks who have sex with underage girls like their hero bart of c-18 but their also a bunch of thoughtless yobs.I would love to see what this aryan guard "council" looks like.lol

and they stole their patch from the Vinlanders SC. if brian or any of the VSC heard about this theyd fuck you little pussys up

To address a comment we accidentally deleted, the reason why "Psycho" is quoting "backwoods" is because Edward Kennedy used to post as "backwoods." When Kennedy decided to go by his real name, all his previous posts were affected. However, because the text is in the body of a quote by another user and because the quote contains Kennedy's old user name, "backwoods" is what will remain in the quoted text.

You should put up evidence of this alleged "police informant" Brad Galloway as this site has evidence of the stealing of "ideals" by the aryan guard the debauchery and underage sex of the aryan guard etc etc and might i add BY THEIR OWN WORDS lol!!!Anthying less is just hearsay let's see the EVIDENCE!!