Tarek Fatah and The Toronto Sun Ramp Up the Islamophobia

As a result of the Covid-19 pandemic and social distancing health measures, the Mississauga City Council recently approved a temporary relaxation of noise by-law restrictions, allowing mosques in the city to broadcast the Islamic call to prayer during Ramadan. The motion was passed unanimously and also made clear that services were not to resume.

This decision by the city of Mississauga has sent the Canadian far-right into a frenzy, with a few people staking out mosques in a bizarre attempt to stoke outrage and get some clicks.

Muslims in general are being targeted for harassment. One of the more high-profile instances is William (Damien) Majeau, who released 3 videos of himself staking out mosques.The first, on April 24th at Al Rashid in Edmonton, where he talked about the "Ramadan Bombathon" and tried to catch worshippers at the mosque. He was disappointed, and said so.

The second video, taken that day, focused on a Muslim mother and her two very young children, scoffing that they aren't socially distancing. It's unclear whether Majeau doesn't know the social distancing requirements (you are not required to distance from members of the same household,) or whether he thinks different requirements should apply to Muslims.

A third video, posted April 25th, shows him driving around the Edmonton Islamic Academy, remarking on the number of vehicles in the area, and presuming they were attending a service. They were actually participating in a socially distanced Ramadan parade.

Damien Majeau “staked out” Al Rashid Mosque in Edmonton to try and catch people going for worship as it’s Ramadan.

After being disappointed that no one was there, he ate a bacon sandwich and listened to Lynyrd Skynyrd in his truck like the badass he is.

Despite the Edmonton Police Service claiming this was under investigation, nothing has been done, prompting the National Council of Canadian Muslims to release a statement admonishing the Edmonton police for their lack of action.

If a Canadian Muslim with ties to nefarious groups threatened a Bombathon and staked out locations, while trespassing, we are sure an arrest would have already been made.

To make this even more egregious, Majeau is a Clann associate and friend of white supremacist fail-son and hate group hopper Ryan Dean, who last year stalked and entered Al-Rashid Mosque with Tyson Hunt. Additionally, Dean and friends are responsible for the closure of Queerflex.

To date, Dean and his friends have faced virtually no consequences for their brutal and persistent harassment of Indigenous peoples, the LGBTQ+ community, Muslims, and others.

Moving on, Brad Salzberg's C(r)ap for Canada is a little upset. As is Faith Goldy, and others. 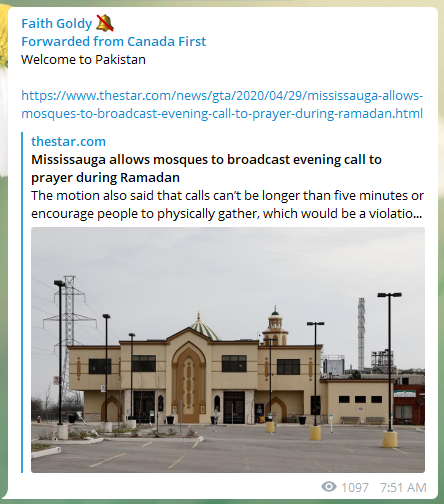 Which brings us to the point. In light of all the in-person stalking and harassment of mosques, the Toronto Sun published an incredibly irresponsible and dangerous op-ed by Tarek Fatah. The article is deeply rooted in anti-Muslim rhetoric, which only serves to stoke this outrage more and embolden and encourage the Majeaus and the Stefanises and others in their harassment. 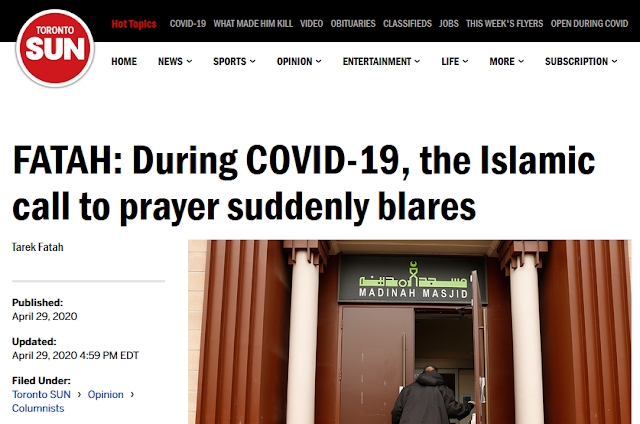 He begins the article by needlessly mentioning the Danforth shooter. Other than the street name, the only thing that ties these two stories together is that the shooter happened to be Muslim. Fatah's lazy writing aside, the shooter also suffered from serious mental health issues, and was obsessed with incel ideology. That was his ideological motivation. His crimes had nothing to do with his religion. It was a loud dog-whistle to his base, who would arguably throw him away as fast as they'd look at him if he didn't walk their line. 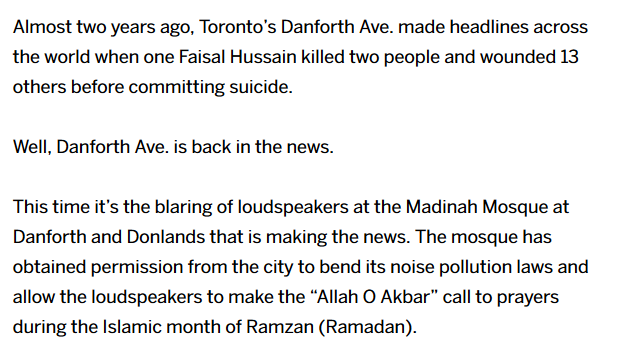 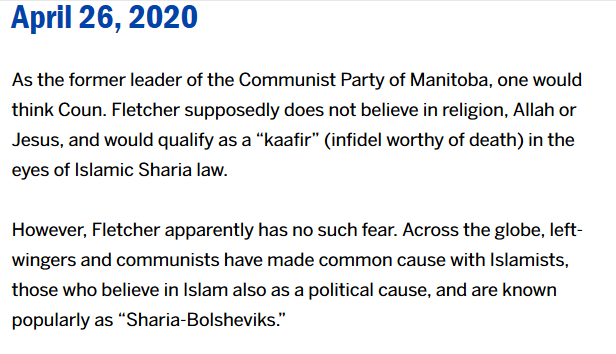 Fatah claims that one uncited from a supposed Iranian refugee is evidence that Canadian Muslims are afraid to oppose the call to prayer played on loud speakers. 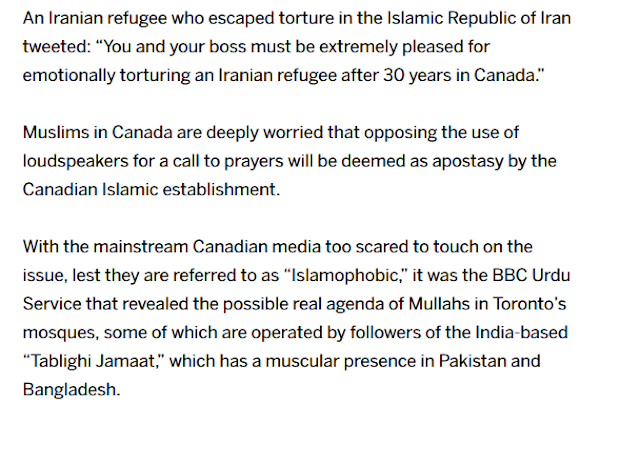 Fatah concludes his op-ed by citing the fable of the Arab and the camel, a short story in which a man allows his camel in to his tent on a cold night, a little at a time to eventually be pushed out himself.

Also, if you research "Sharia-Bolsheviks," his name is pretty much the only thing that comes up. 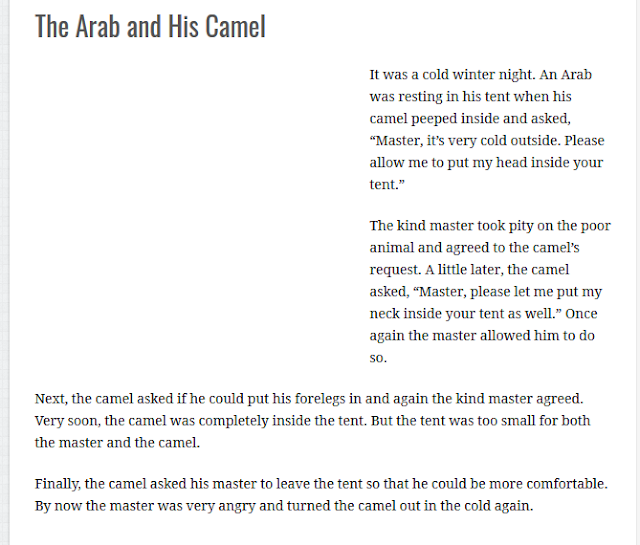 Fatah even went so far as to sign and share a petition to have the loudspeakers stopped. 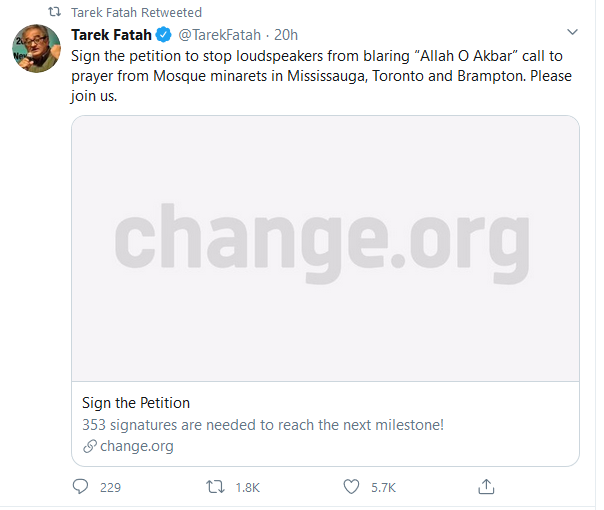 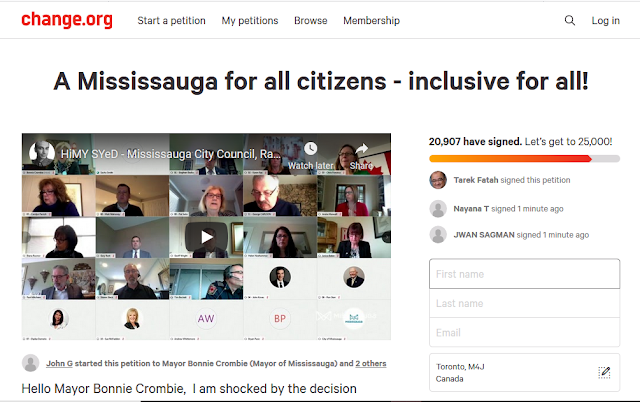 Inclusive for all, except Muslims


A petition which actually used this statement as a part of it's justification.

The petition, added by "Mike Gab," was moved from change.org to citizengo.org, with the same description on May 2

His article was shared in many far-right Facebook groups. It was shared in the main Yellow Vest group, and the comments were what should be expected at this point. 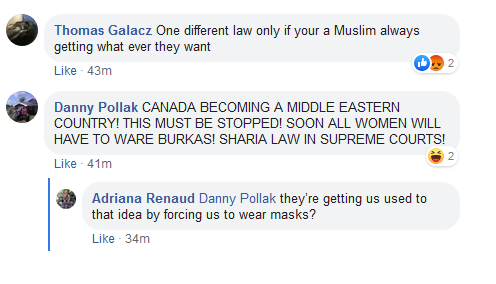 The Sun also published an article by Joe Warmington, and it was better, and more objective, however trust the hatriots to twist it to suit their narratives. The article was also posted in the main yellow vest group. The response was the same. 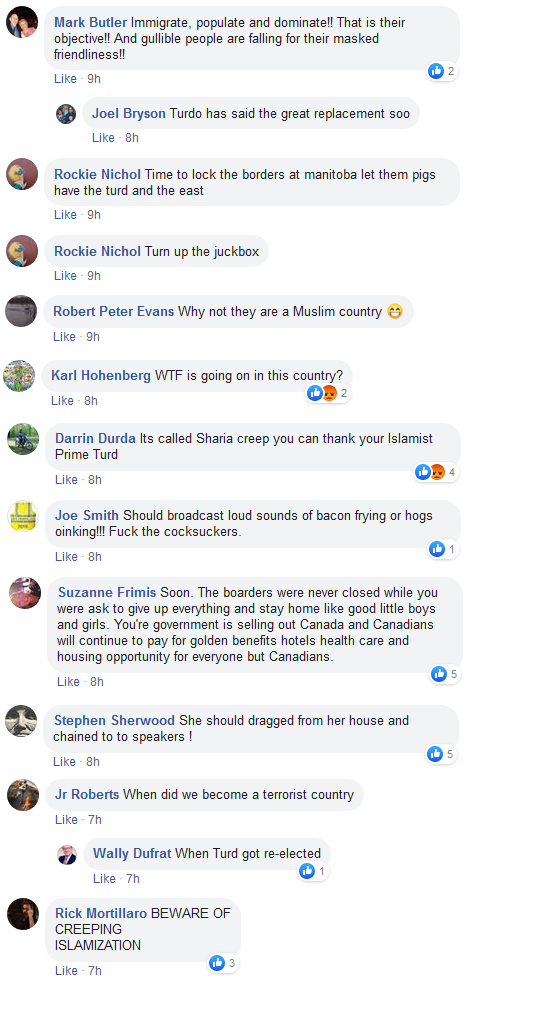 The Fatah article was shared in the less popular yellow vests groups as well. 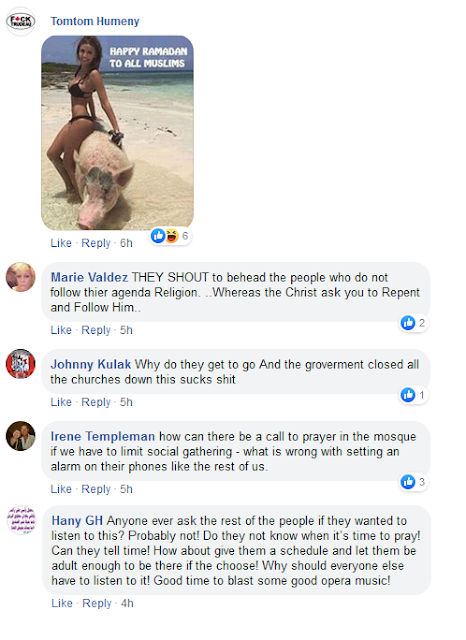 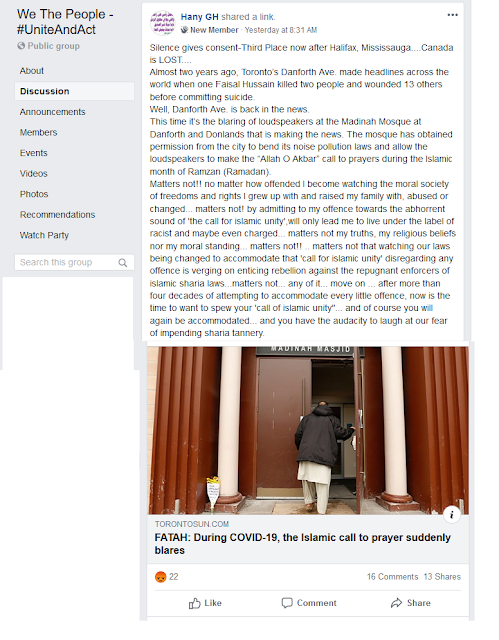 The only reason to get so upset about this issue is if you hate Muslims. Mississauga made a minor concession to the Muslim community, during a very difficult time. The by-law restriction is only temporary, and the call to prayer will only last 5 minutes per day. There is no reason to be so upset about something that likely won't affect most of the people complaining. But, as we all know, the people who accuse everyone else of being "snowflakes" are the most likely to have major meltdowns. After all, you know what they didn't collectively wring their hands over? Montreal ringing church bells every day at noon to let the city know they aren't alone.
Posted by Yellow Vests Canada Exposed at 18:10