This has been a tough Ramadan for those observing during COVID19. Normally Muslims are praying at the mosque and breaking their fast with friends and families.  An agreement was reached that mosques can sound the Adhan (call to prayer) during Iftar (the time to break the fast). We've seen Islamophobes in response across the country surveying mosques. The reasons usually around outrage over the call to prayer during the time to break their fast in the evening or a paternal need to spy on Muslims breaking social distancing rules. 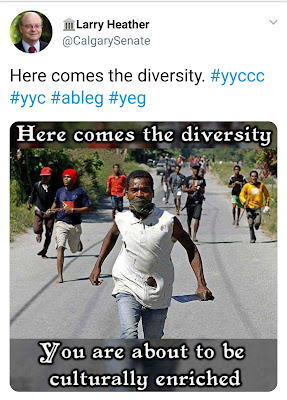 Normal and good one, Larry


Focusing on Calgary brings us to Christian supremacist, local racist and hero to the likes of WCAI Canada, Larry Heather. Larry posted a video he recorded to his Facebook at Akram Jomma, a north east mosque. Listening to what he's saying in the video, it's clear he's just making things up to drive his narrative. Larry makes a bunch of claims that Muslim prayers of "God is greater than" actually means calling for the death of Jews and Christians. He points to cars in a parking lot across the street and says "they're coming to the call". 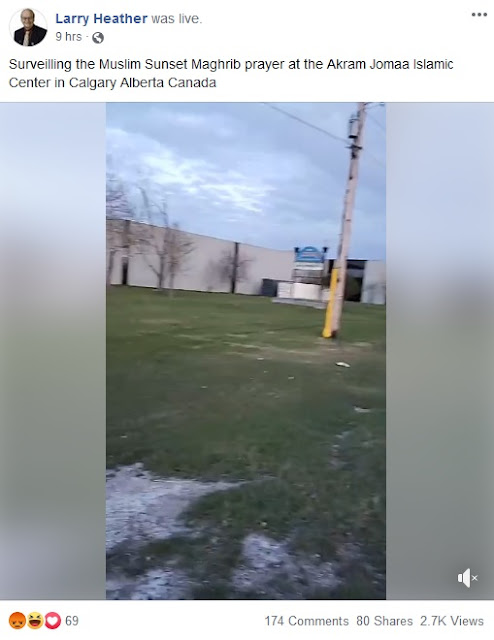 Larry finds the slipperiest hill to make an argument on, that if you let Muslims call to prayer once a day, they're going to do it all the time because that's what happens in established Muslim lands. Someone should remind him this isn't an established Muslim land, it's a mosque in a north east Calgary industrial park. The slippery slope is a very common and felacious argument for Islamophobes, it is to point there was an academic article written on the phenomenon.

ARC hasn't talked much about Larry, but others have done the work for us. He is a regular candidate for the mayoral election and always loses. Larry has been kicked off twitter a few times for all sorts of discrimination and at one point,  was banned from Calgary City hall for going over his alotted speaking time.

Word got out that Larry had been spying on the local Muslims and people wanted to let Larry know how they felt. Amidst the comments of angry people versus a few Larry defenders, Christy Mc tagged our bacon sandwich loving friend, Will "Damien Maje" Majeau. 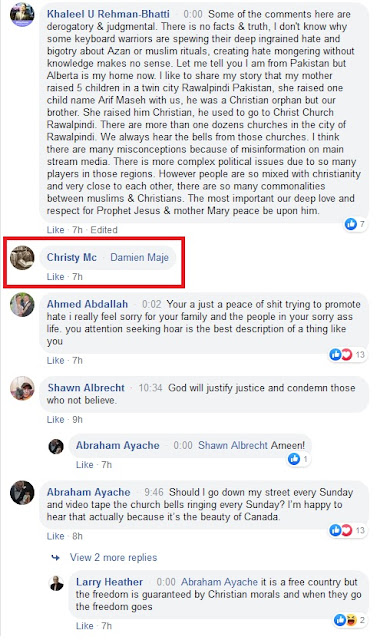 Christy Mc has been a name that's popped up for the past couple of years online. Christy has made her way into a lot of far right groups online and is a regular contributor everywhere she goes. When she's not in groups posting crimes committed by people of colour, she's in groups asking if they're groypers. 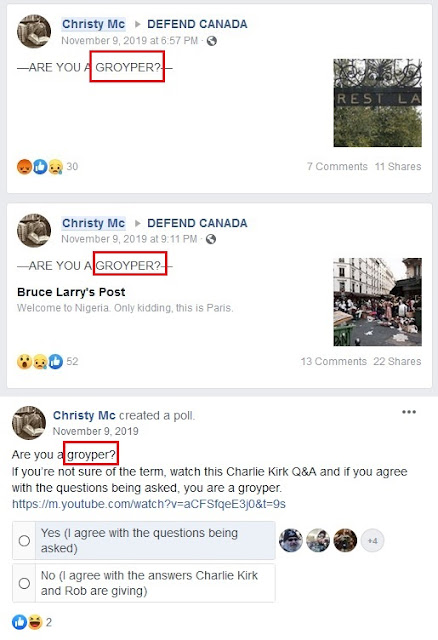 According to the American Defense League:


Groypers are a loose network of alt right figures who are vocal supporters of white supremacist and “America First” podcaster Nick Fuentes.


It's always interesting how these people can all be tied back to each other. At the end of the day it's some kind of white supremacy or another, a need to dominate others that fuels them.