ARC received a tip earlier today from antifascists about swastika imagery at a home in Winnipeg: a swastika has been spotted in the backyard of a home with a confederate flag in the window. 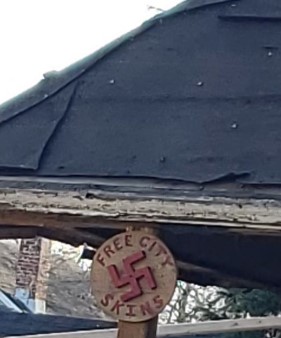 The swastika carving in the backyard. ARC has no record of a Free City Skins.


After an investigation by both local antifascists and ARC, it is strongly believed that this home is the same one from a Winnipeg Free Press story in 2017 about a family from Eritrea being terrorized by a racist in their neighbourhood:


The Eritrean family survived for years as refugees in Sudan without protection, rights or much hope for the future. When a Winnipeg church sponsored them, they thought they’d be coming to a place of peace and security to build new lives for themselves.

That was before they’d ever even heard of a white supremacist. Nearly a year after moving to Canada and being menaced by a neighbour with a Confederate flag in his window, the family feels it may have to move from its quiet North Point Douglas street.

They said they’ve received racial insults like the n-word, verbal harassment and threatening gestures from the man who has driven his pickup truck toward them as if he’s going to hit them when they’re walking down the street, and mimed aiming a rifle and shooting them while saying "go back to where you came from."

"This place has so many opportunities," said the youngest son who starts Grade 12 next month. His oldest brother, who is working and recently bought a car, is grateful for their decent, affordable housing.

"Everything is good — everyone is nice — except this guy," said the eldest.

The family shouldn’t have to move, said Sel Burrows, chairman of the North Point Douglas Residents Committee. "The entire street is on their side," said Burrows, who’s received calls on the committee’s tip line more than once from neighbours concerned about the newcomer family being menaced by the resident notorious for his Confederate flag and "Hail Satan" sign on his truck.

One caller said the man was making threatening hand gestures towards one of the young family members, pretending to load a shotgun, taking aim and firing at the teen.

A Point Douglas man who has a confederate flag hanging in the window of his home says he believes in "white power" but doesn't force his beliefs on anyone. The man spoke briefly to CBC News after a number of people living nearby said they were victims of the man's unprovoked racist remarks.

Kayla Bewer moved to the neighbourhood about a month ago and said she's heard the man yelling at an elderly woman and her grandson who appear to be Latino. "He yells racial slurs to them tells them to go back to their country and stuff. It's just heartbreaking to hear ... I can't believe anyone would say anything bad about her," said Bewer.


A person the CBC interviewed details a harrowing account of Hjlmarsson driving his truck toward them, forcing them to jump out of the way:

"[He] hit the brakes as they jumped off the road out of the way, and obviously that was terrifying for them," Wiebe said. "Whether or not he was physically trying to run into them or just trying to scare them or send a message or whatever the case, it's obviously very terrifying."

The man, who didn't give his name, declined a request for an interview but agreed to answer a few questions. He let CBC news inside his home and showed us a swastika and Nazi symbols painted on the wall. There is also a large confederate flag painted on the ceiling that stretches the length and width of the entire living room.

The man didn't deny hurling racist slurs at his neighbours. When asked why he said "Why come here? Get a free house and then go on welfare? Hate it," he told CBC News. The man said he has had several fights with a black neighbour and has told him to "get off my f--ing street."

The man said he has had several fights with a black neighbour and has told him to "get off my f--ing street."

Despite claiming that he doesn't "force his beliefs" on anyone, weaponizing them to terrorize families in the area is doing just that. Neighbourhood residents report that Hjalmarsson is escalating.

A resident told local antifascists, "I get tired of his BS...He called my wife a s---- last week. His behaviour usually escalates when the weather gets nicer." Residents also report that he makes intentional efforts to intimidate the others on the street.

A search of the address brought up the owner, and from there we tracked it to a man named Justin Hjalmarsson: 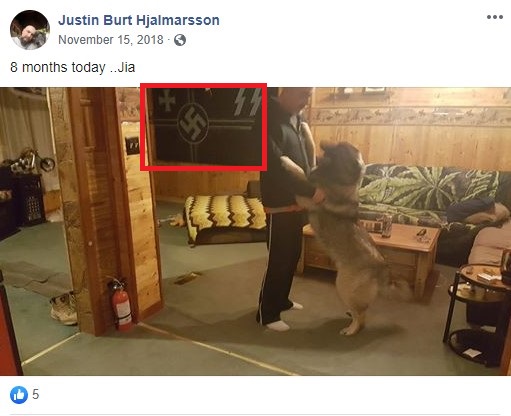 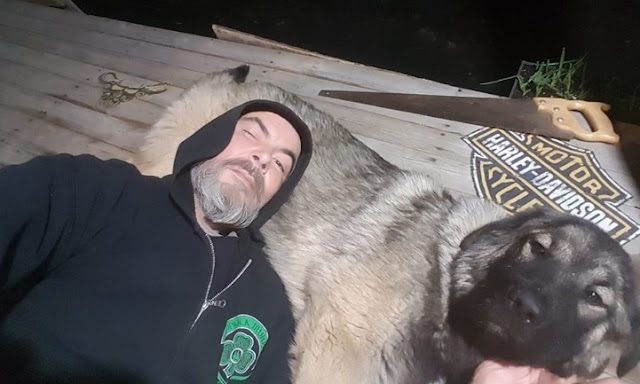 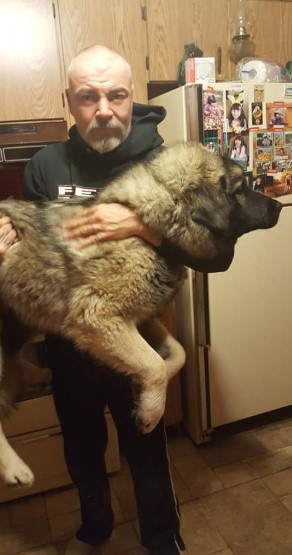 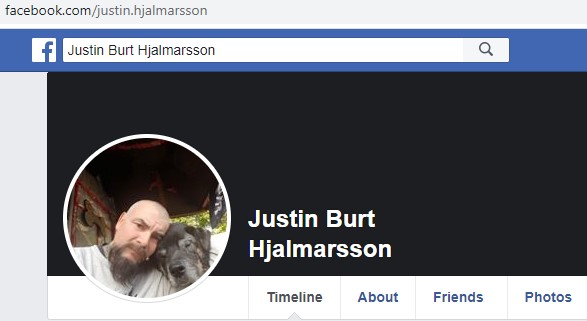 Hjalmarsson seems to be quite taken with the ovcharka dog breed, and a sign above his door warns of "ovcharkas on duty." A confederate flag hangs in the window, and celtic crosses on the fence. 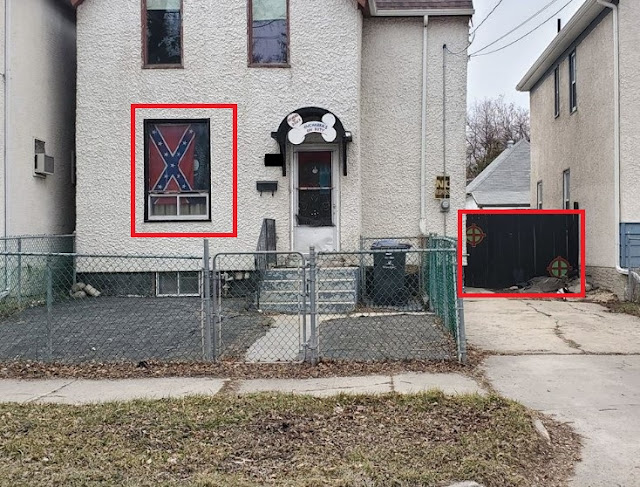 A photograph taken by Winnipeg antifascists and provided to ARC - April 25, 2020

Google earth shows the same flag in the Window, in 2014: 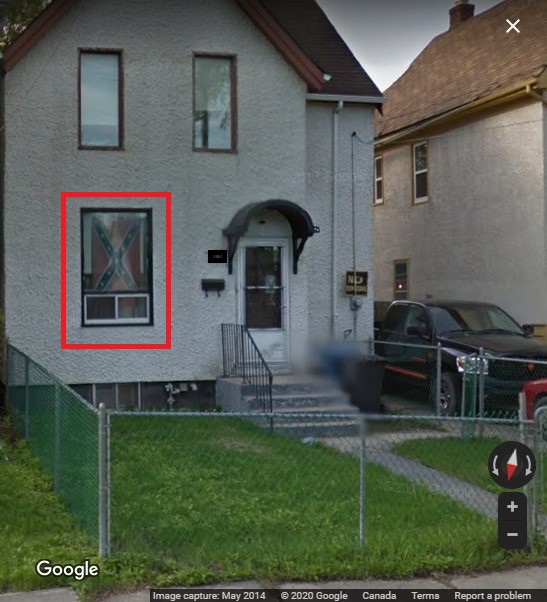 In this video from his Facebook profile, Hjalmarsson's mother, Gail, speaks German to their dog and a Nazi flag is clearly seen on the wall:

In addition to being a neo-Nazi, Hjalmarsson also supports the Hells Angels

Winnipeg is, historically, a very unfriendly city for fascists. From the Battle at Old Market Square in 1934, where hundreds of antifascists squared off successfully with the Winnipeg-based Canadian Union of Fascists, to more recent events, such as the less-than-warm welcome for the neo-Nazi Canadian Nationalist Party, a massive rally against hate in 2017, and the mass mobilization against postering efforts by The Base and Patrik Mathews.

Given Winnipeg's history, it's likely that Hjalmarsson has exactly the kind of support he deserves there - none.


If you have any further information on Hjalmarsson or the Free City Skins, email us at yvcexposed@protonmail.com.

Email ThisBlogThis!Share to TwitterShare to FacebookShare to Pinterest
Labels: Winnipeg