This past week saw the long awaited Arthur Topham hate crime trial. For years Topham had posted blood libel screeds against the Jewish people on his website RadicalPress and despite the trial he continues to do so. A few years back a criminal complaint against him was made, he was arrested, and.... well.... here we are today.

Topham himself has been posting a running commentary, including these two posts found on his Facebook page: 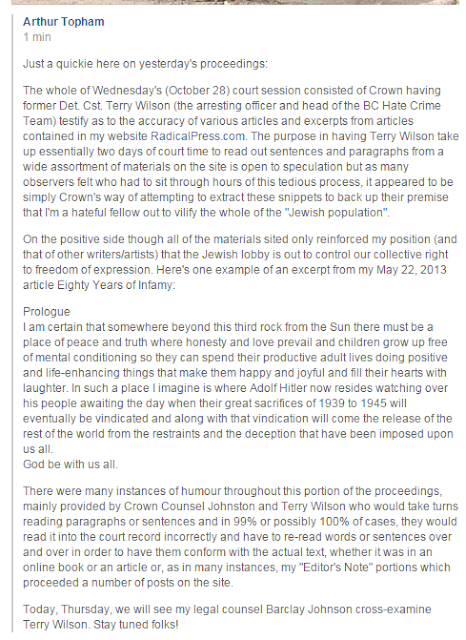 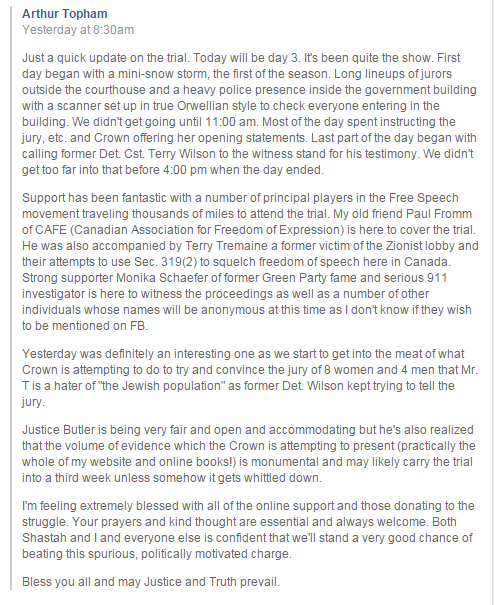 He has also provided some details about the defence strategy.

Paul Fromm had suggested at the London Forum that former KKK leader and convicted fraudser David Duke would be appearing as a defence witness arguing for the veracity of the Protocols of the Elders of Zion. So far we haven't seen anything to support Paulie's claim, however Topham does confirm at least one defence witness: 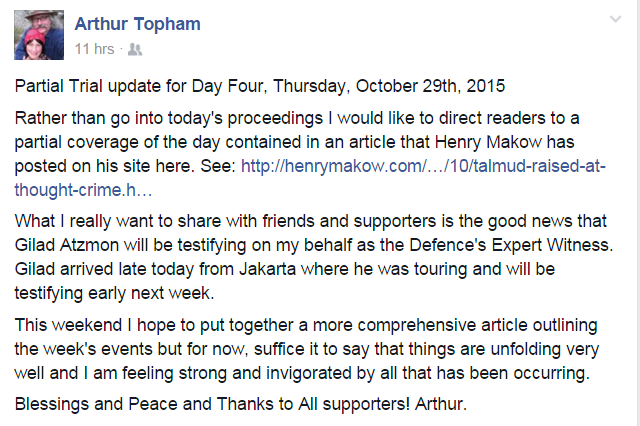 Gilad Atzmon has been condemned for his rapid antisemitism by a multitude of academics and artists, including members of the Palestinian activists who wrote an open letter (who themselves aren't exactly fans of Israel) disavowing any offers of support from Atzmon.

So of course, Gilad Atzmon is good people in Topham's view.

Another individual posting running commentary on the trial is someone our readers are familiar with: 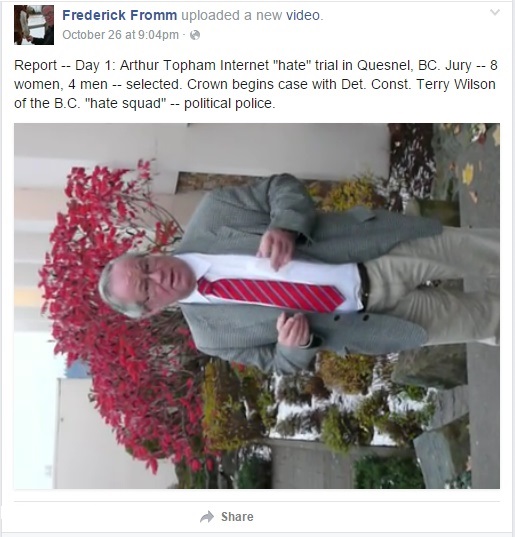 Jesus Paulie! Are you still unable to figure out out to post a damn video? 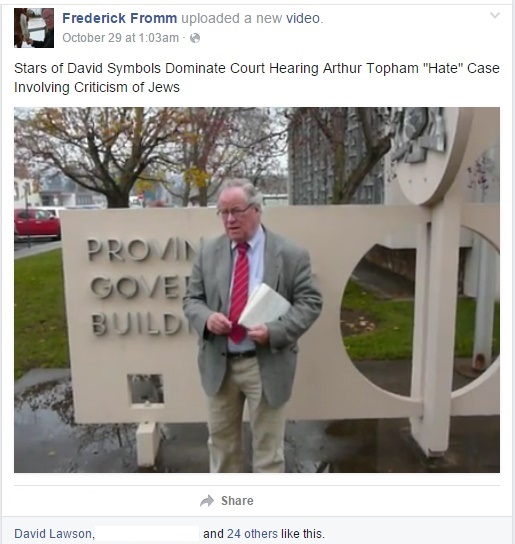 Finally! Dude, it's really not that hard.

Anyways, we're not going to post his videos this time as Paulie has kindly provided a synopsis. The one above is sort of indicative of the mindset of these people who see the influence of "the Jew" everywhere, even in something as innocuous as a chandelier. Paulie's evidence of "Jewish power" through light fixtures was also a topic in a radio program he was a guest on this past week.... though he couldn't help first bellyaching about not being able to enter the United States still: 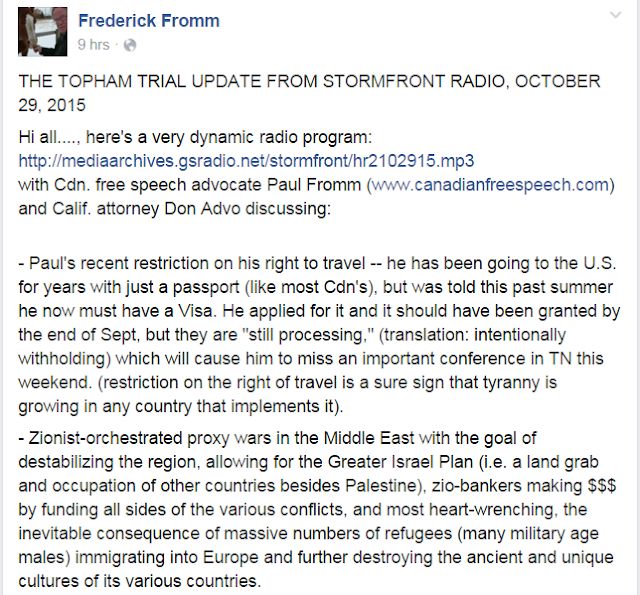 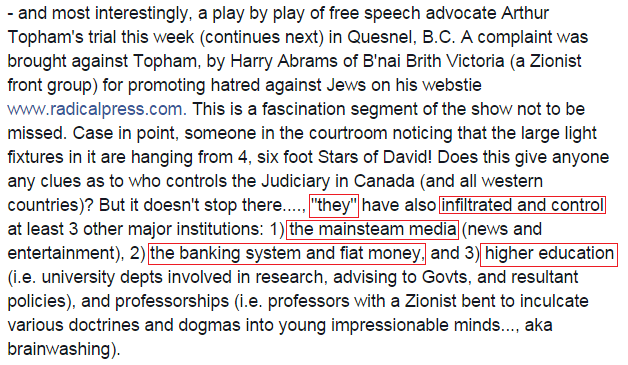 Regarding the chandeliers, Paulie promises that he would try to provide photographic evidence of the Zionist-inspired ceiling lamps: 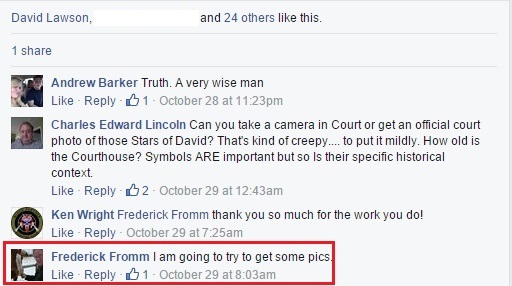 Uhm.... isn't it illegal to take photos in a court room during a trial?

Paulie also provides indication as to the direction of the defence: 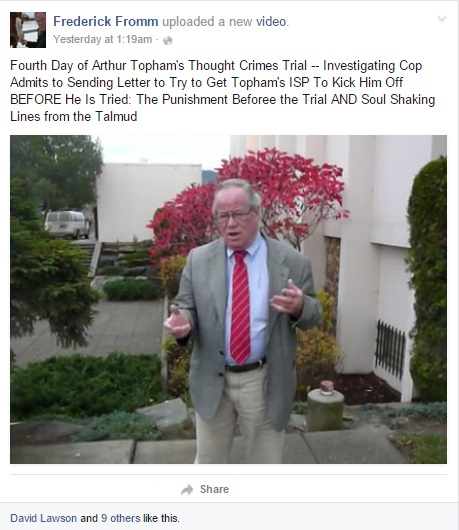 Part of the complaint made against Topham is his inclusion of materials originally written by Elizabeth Dilling (Topham adds his own commentary) who was a notorious antisemite who, towards the end of her life, would sign her name 'Elizabeth Dinning, D.D.T.' which stood for "Doctor of Damned Talmud." She of course wasn't an expert on the Talmud (she in fact had no degree having dropped out of the University of Chicago), but her translation/interpretation of the Talmud has been fodder for antisemites for decades. It seems that Topham is going to claim that the Talmud is hate speech based on Dilling's work then.

Towards the end of the week, Paulie post his most recent update: 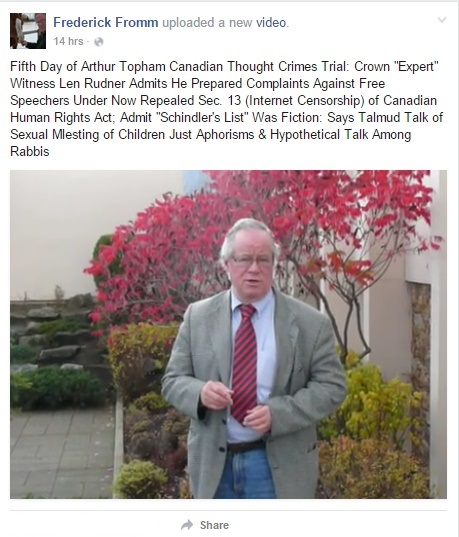 We somehow suspect that Mr. Rudner didn't "admit" that the movie, "Schindler's List" was fiction other than, because it was not written strictly as history, there may have been artistic license taken in the the writing of the screen play. This doesn't of course mean that Oscar Schindler wasn't a real historical figure who during the war didn't save the Jewish laborers working in his factory.

But again, we return to the issue of the Talmud which supposedly sanctions Jews doing all kinds of criminal and depraved acts including murder, pedophilia, incest, bestiality, and debasement of non-Jews. We spoke to Harry Abrams who made the original sec. 13 complaint against Topham; the inclusion of the Dilling material (prohibited for import into Canada) formed part of the basis for his human rights complaint against Topham:

There are a number of supposed quotes from the Jewish Talmud in the Dilling material that Topham has reproduced on his website. his editorial forward to them at RadicalPress pretty much suggests that he has these horrific assertions on his site for "truth," and highlight the supposed evil intentions and actions of Jews towards everyone else. 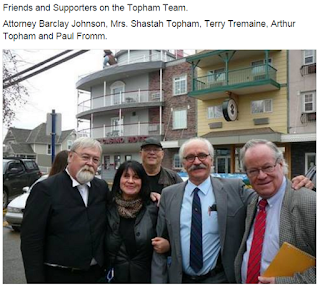 Being as these quotes alone and in aggregate falsely implicate Jews as being compelled by their religion to commit all kinds of perverse and horrific crimes against non-Jews; this makes them what we call a blood libel. Indeed variants of this go back certainly to Medieval times when it was popular to accuse Jews of all kinds of crimes, to then presumably justify murder and mayhem against them.

The problem with these quotes is that some are simply made up, and others may be cherry-picked and/or misinterpreted from obscure bits of actual Talmudic text. The Talmud is made up of many volumes, and is the aggregated knowledge of discussions, folklore and rabbinic wisdom accumulated over literally hundreds of years, so hate crime experts and social workers hesitate to state under oath that all of the statements are completely bogus.

There are places on the web that specifically address this but as was suggested in the Henry Makow [who has been writing about the trial as well] article (assuming that bit is accurate) the witnesses may not have wished to go into the details of each quote specifically, other than to suggest that these kinds of acts are against the Jewish (or indeed any) religion and he relies on the Keegstra decision which ascertained at law (which has so far been unchallenged) that these kinds of supposed Talmud quotes were distorted and hateful.

The trial continues Monday.
Posted by Nosferatu200 at 13:06

Jew Haters are attracted to Atzmon as fly's to shit......
Wonder who pays for the flight as this moron Atzmon can't afford a Taxi with his dying career.