The Aftermath of a Tragedy

One would have to be living under a rock to not have heard about the horrific attacks in Paris that occurred on November 13. A total (as of this date) of 130 dead and 368 injured in what must be described as an act of cowardice by people subscribing to a twisted and evil ideology. A day before a car bombing in Beirut, Lebanon killed 43 people and prior to that 18 people attending a wedding were killed in Baghdad, Iraq. On November 17, 37 people were killed in Nigeria in a bombing that experts suspect was the handiwork of Boko Haram (who have pledged intelligence to Daesh). Just yesterday we learned that at least 21 people were killed in Mali. And today in Cameroon at least 5 people have been killed in a suicide bombing.

Those killed and injured run the gambit of ethnic, national, and religious origins and include Muslims among their numbers. Looking at the names and countries of origins for those victims of the Paris attack indicates a number of Muslims were killed and injured by extremists. In fact, the religious group most adversely affected by Daesh and their affiliates are Muslims, which is why so many refugees are fleeing Daesh in Syria.

The Canadian government is still admirably committed to taking in 25,000 Syrian refugees by the end of the calendar year. This writer hopes that is just the beginning of Canada's commitment to help refugees. But, despite the good will of the Canadian government (thus far) and most Canadians, there have been a backlash against both the idea of helping refugees as well as Muslim-Canadians.

Much of the backlash comes from places that are not at all unexpected. For example when a mosque was set on fire in Peterborough, Ontario, Kyle McKee and the folks at Stormfront were pleased as punch:

Also, when a Montreal man was arrested for uttering threats and inciting hatred, Jonathan Kotyk of Winnipeg jumped to his defence: 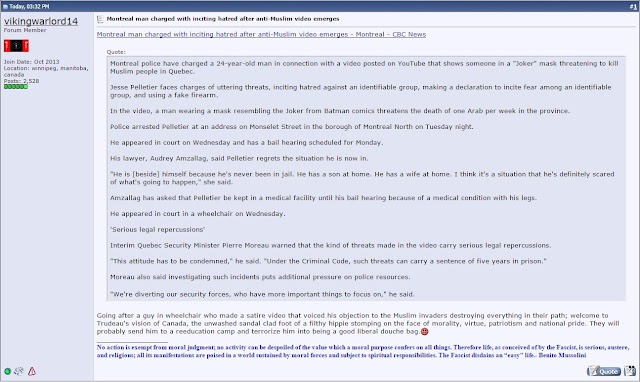 And never one to jump on an opportunity (much as he did back in the early 1980s) is Paulie: 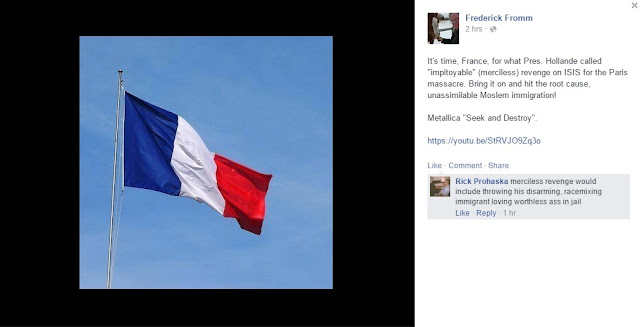 The reaction from PEGIDA Canada members to the terrorist attack in Paris was equally predictable. We won't post every message this time since our readers likely already have a pretty good idea what is being written, however we do want to provide one particular illustrative example: 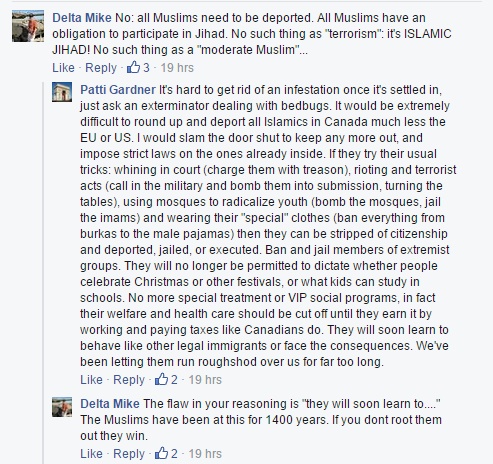 Keep what Ms. Garder wrote in mind because we will be revisiting it again momentarily.

We also checked out Free Dominion since we were sure that the consensus there would be to demonize Muslim-Canadians in general and Syrian refugees specifically. The first post on the subject, posted by Connie Fournier (direct link here), was a genuine, and very pleasant, surprise (click on the photo to enlarge it to better read it): 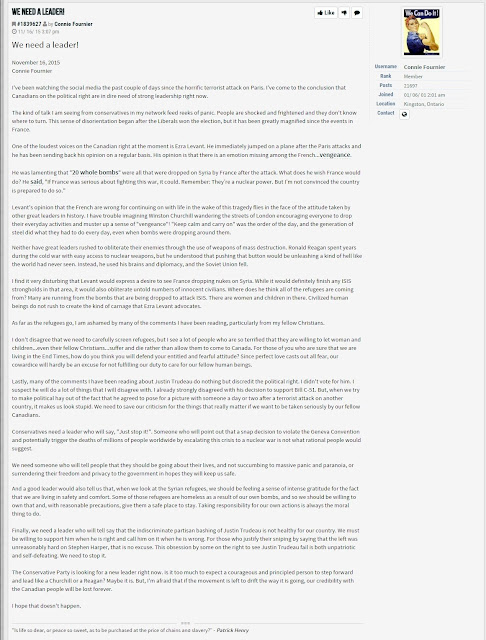 This writer won't lie. Reading Ms. Fournier's reasonable forum post (and how strange does it feel to write that?) as well as some of the other members who agreed with her was.... honestly refreshing and made me feel a lot better than I had been given the events of the past week. Hell, she even called out demagogue Ezra Levant.

However pleased we were to see what Ms. Fournier wrote, there are still those members who's hatred still trumps reason: 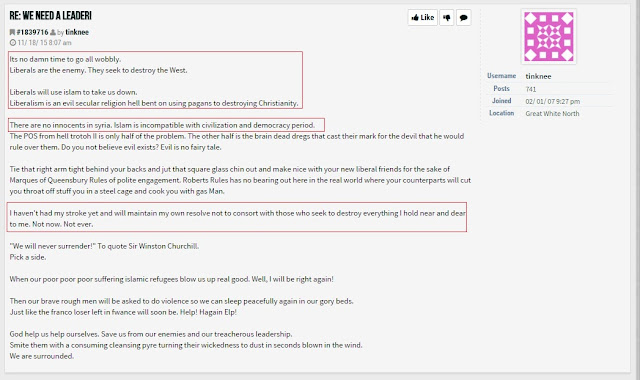 This last point by "Faramir" (Jason Bertucci) continues a theme that is related to that found on the PEGIDA Canada Facebook group:

Despite claiming that they reject Muslim (and specifically in this case Syrian) immigrants/refugees as they are supposedly incompatible with western democratic traditions, those who are often the most vehemently opposed to the presence of Muslims in Canada have a deep antipathy towards those democratic freedoms themselves.

Another case in point. One of the few Canadian premiers to oppose the refugee program is Saskatchewan's Brad Wall. In response, a number of people in Saskatchewan protested to oppose Wall's position:

Ms. "styky" may be disappointed to learn that despite his disagreement with the federal government, Mr. Wall still plans on coordinating the settlement of Syrian refugees in his province.

The response to the link from some Free Dominion members though was telling, starting with the not too subtle racism and bigotry: 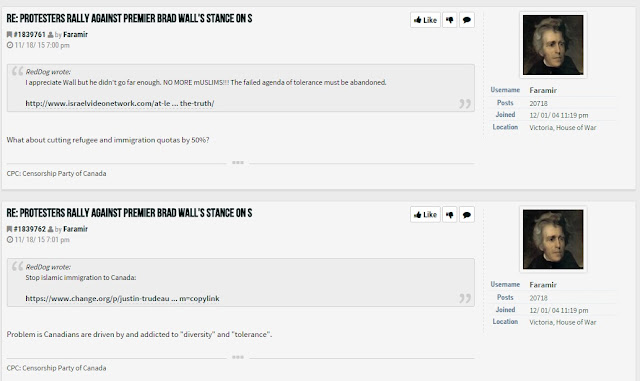 None of these surprised us. Neither did this one for that matter, though it does again call into question these people's commitments to the democratic institutions they claim to hold so dear:

Finally, regarding Obama's criticism of governors and congressmen who have used the tragedy in Paris to oppose allowing refugees into the United States and to score political points amongst their base, Jason "Faramir" Bertucci writes:

But remember, according to people like Bertucci it is Muslim-Canadians and Syrian refugees who pose a danger to our freedoms.

At least crazy Edward Kennedy is no longer posting on Free Dominion. Otherwise this too would have been included in the mix: 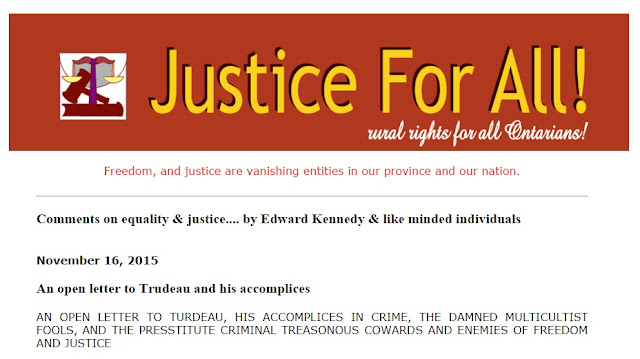 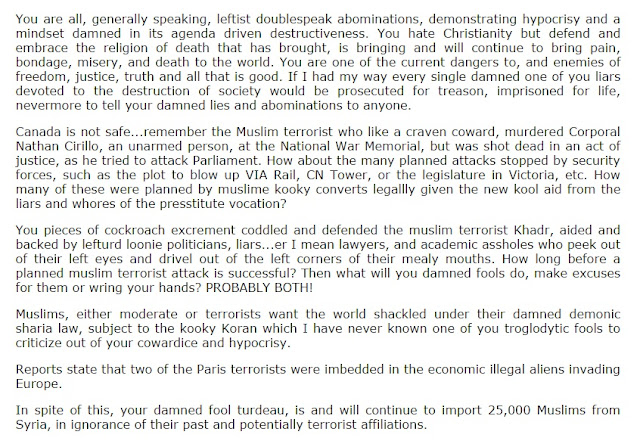 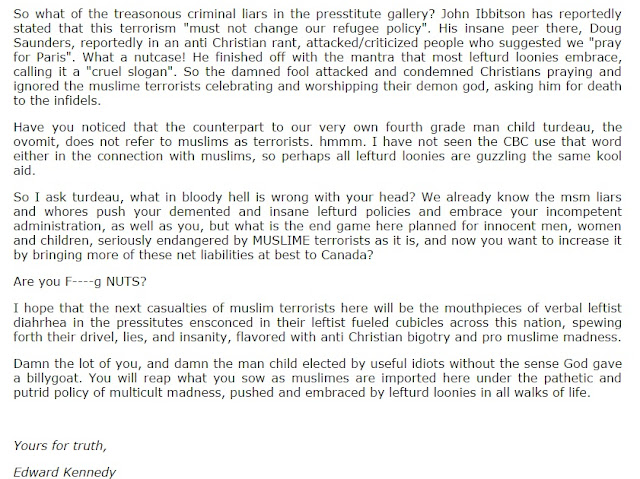 Something that makes it kind of ironic that these right wing nuts are freaking out about "Islamic terrorists", is that the only reason Jihad and violent Islamic rhetoric became popular is because the Americans funded it in the 70s during the Afghan Soviet invasion to drive out the Soviets. America even went as far as publishing Jihad textbooks at the University of Nebraska to be distributed to young children in Afghanistan that promote taking up a holy war. Reagan praised the Mujihideen who formed the Taliban, calling them "freedom fighters" and said "we know of their deep belief in God, and they are confident their struggle will succeed"... They realized how useful they were and now in 2015 are funding "moderate Islamic rebels" that nobody can seem to find, who are really Al-Nusra with direct links to Al Qaeda.. Last year Al-Nusra was officially a terrorist group, but now I guess they're "our terrorists". It is a clear example of America's disastrous policy of arming "rebels" and promoting a false "religious" cause to encourage regime change. These so called, "moderate rebels" often defect to ISIS as soon as they are armed by America. The CIA knows this, it's the whole plan. Its why America was so upset that Russia started bombing ISIS.

THE POINT IS JIHAD / ISLAMIC TERROR was MADE IN AMERICA! And as a political nation - wrecking CIA experiment nonetheless. It is not Muslim's fault for anything the CIA has done over there and what "Islamic State" and so called "moderates" like Al Nusra who have been indoctrinated with the Jihad ideology continue to do, any more than it is Christian's fault for what the KKK, who claim to be Christian, does. Direct it at the people who caused it, the terrorists and their backers, not towards Muslims who are like the author of this blog said, often "Islamic Terror"'s first victims, and people need to understand that we overwhelmingly have not bought into the rhetoric pushed my the Jihad groups, nor the mainstream news networks that seeks to terrify people and make a common enemy to rally ignorant people together over.It reminds me of some of the WWII propaganda in the way they play the same themes out (isnt this what we have "Remembrance Day" for?? To make sure that never happens again?)