NOTE: This is a little screen shot heavy. Be forewarned.

On June 26, Sec. 13 of the Human Rights Act cease to exist. As our friend BCL noted however there is no reason why Sec. 13, which was ruled constitutional by the Supreme Court, can not be brought back by a more enlightened government in the future. In the meantime the good folks at the now moribund Free Dominion have decided to post (a now rare) comment to celebrate the demise of Sec. 13: 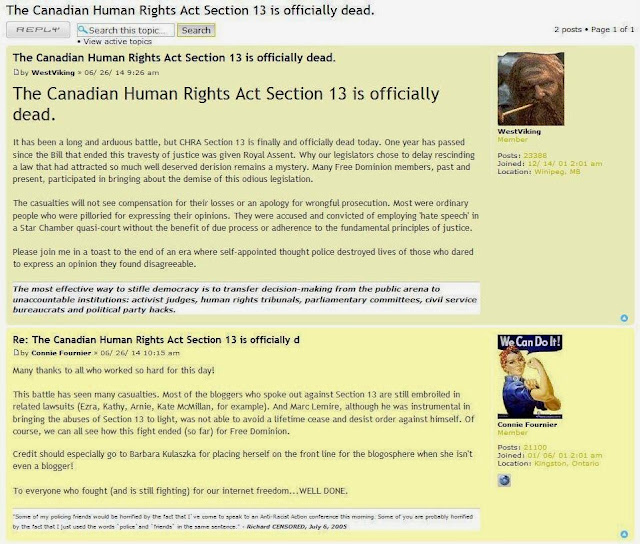 It it isn't surprising that Connie would give props to Marc Lemire as Free Dominion had been on the forefront of the effort to rehabilitate Lemire's reputation, characterizing him as a free speech martyr. In fact, they went beyond this and engaged in a little bit of historical revisionism. Not only did they deny his role in the leadership of the Heritage Front from 2001 to 2005, they have all but denied that he had any significant history with the hate group. We have attempted to show them the error of their ways, but it seems they have decided to believe him rather than us. But then they aren't the only ones who have tried to help Lemire cover up a very shady past. Ezra Levant, in two interviews with Lemire, asked about the Heritage Front and did not challenge this response:

Uh, the Heritage Front uh, was active back in, uh, the the 90s and I was a young kid at the time. I had some, uh, interest in some of the things that they were doing in particularly thing like uh opposition to employment equity, things like reducing immigration. So I uh, listened to some of what they were about, and uh, I went away from it. I mean I was involved with them peripherally in my teenage years.

Well, that is partially true, as these articles indicate he was active with the Heritage Front in his teen years (he would have been 18 at the time of the 1993 photo and 19 when they were published): 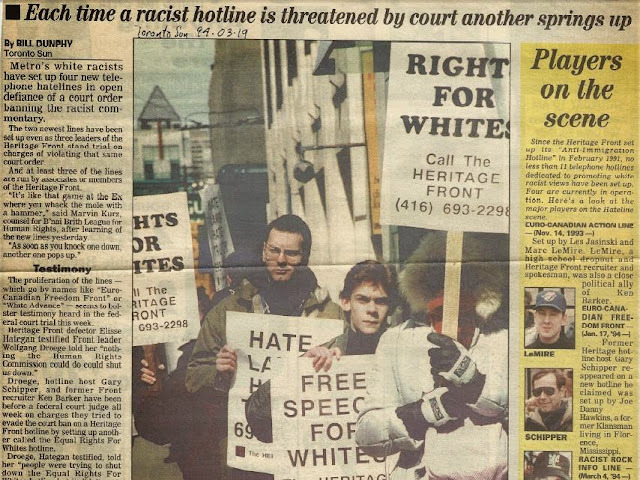 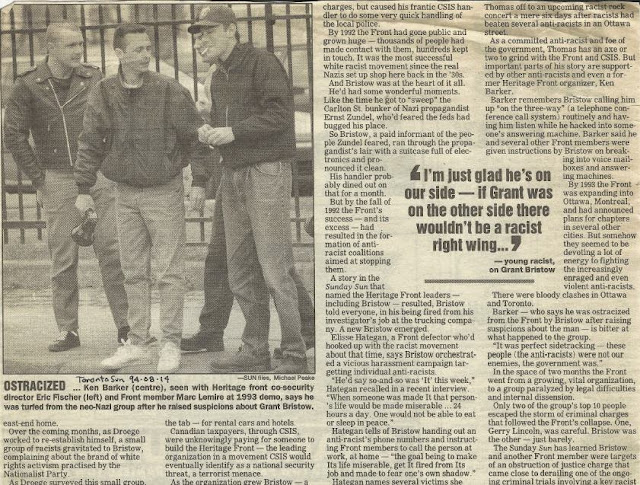 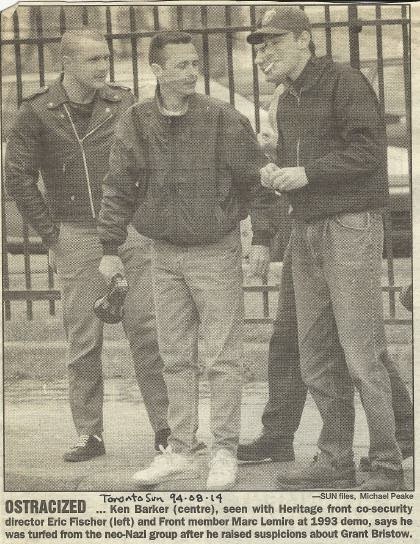 Of course he would have been 20 when the September edition of "UpFront" was published: 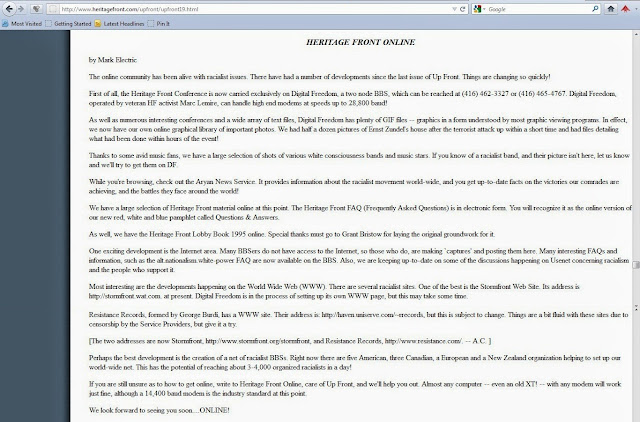 Really though, if we were to re-post every single piece of evidence concerning Lemire's membership in and eventual leadership of the Heritage Front, we would bore your readers to tears so we will merely direct you to the following link:
The part of the Free Dominion post that we really want to focus on, however, was made my "WestViking":

The casualties will not see compensation for their losses or an apology for wrongful prosecution. Most were ordinary people who were pilloried for expressing their opinions. They were accused and convicted of employing 'hate speech' in a Star Chamber quasi-court without the benefit of due process or adherence to the fundamental principles of justice.

Please join me in a toast to the end of an era where self-appointed thought police destroyed lives of those who dared to express an opinion they found disagreeable.

The people who WestViking characterizes as having been victimized for, "disagreeable" views were not simply ordinary people, "pilloried for expressing their opinions." They were members of or associated with often violent hate groups disseminating hate propaganda. An examination of the CHRT transcripts clearly show that the complaints brought against these individuals were not the result of telling some off-color jokes or "hurting the feelings" of individuals or identifiable groups. Here are some of the objectionable views of a few of WestViking's "victims": 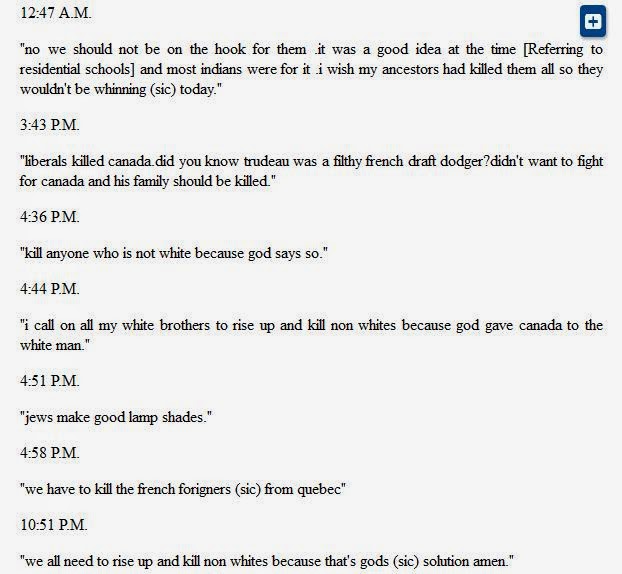 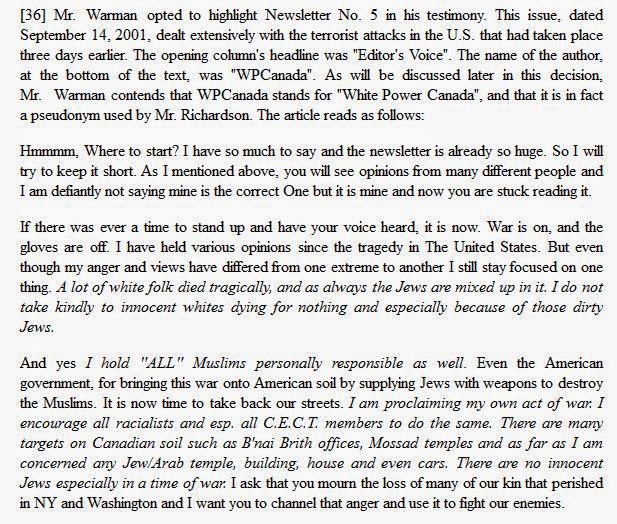 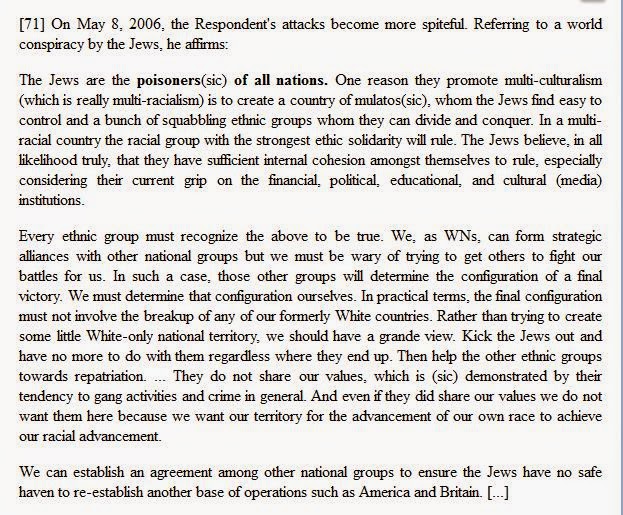 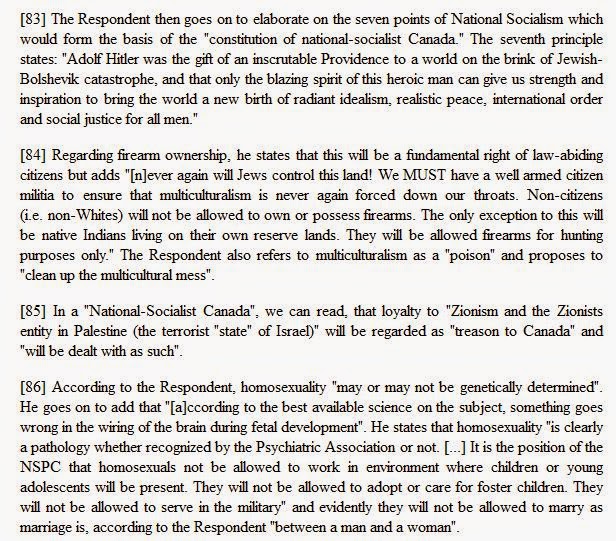 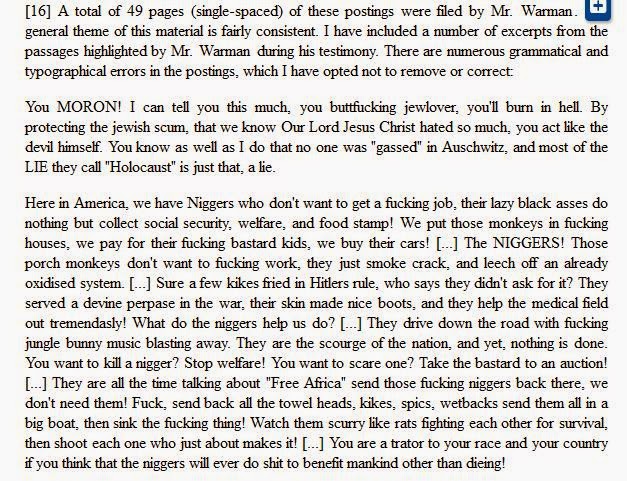 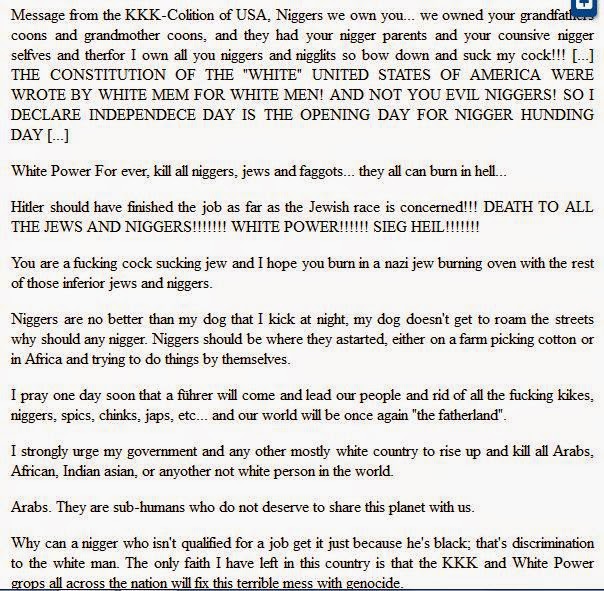 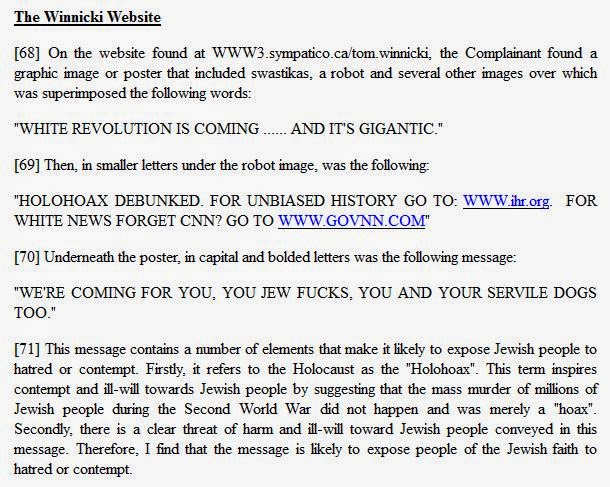 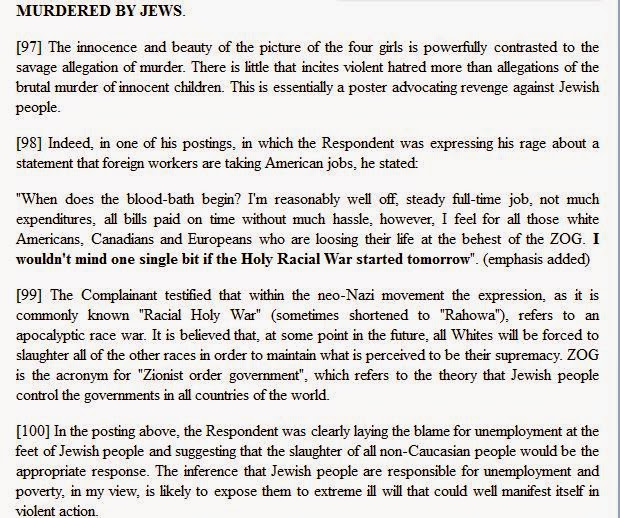 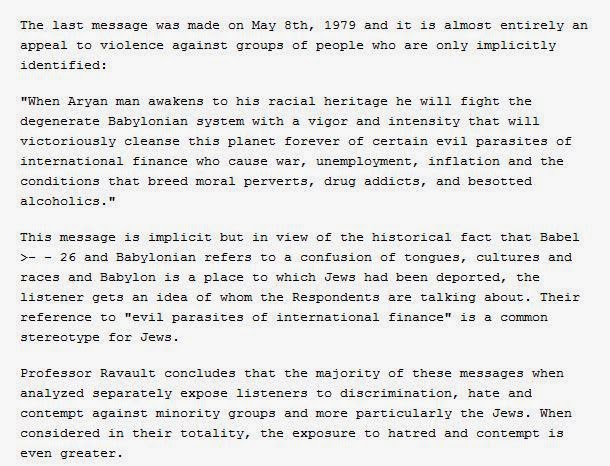 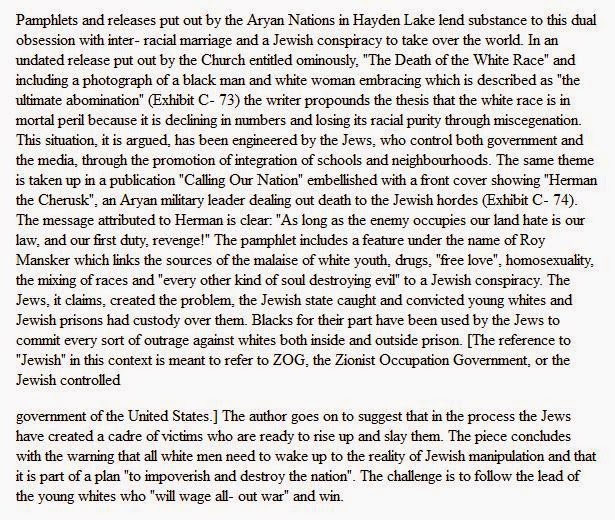 Charles Scott and the Church of Christ in Israel. 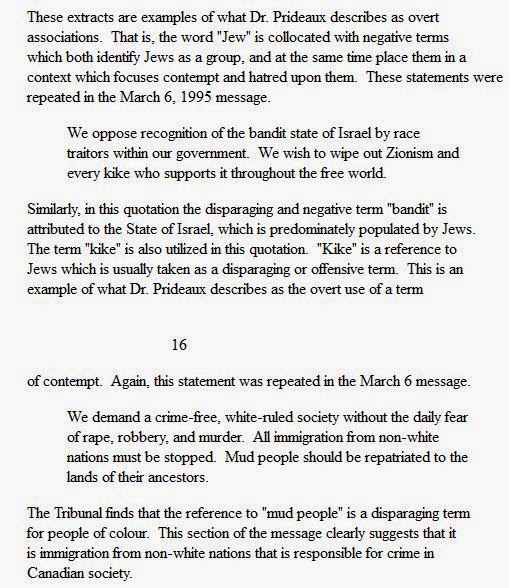 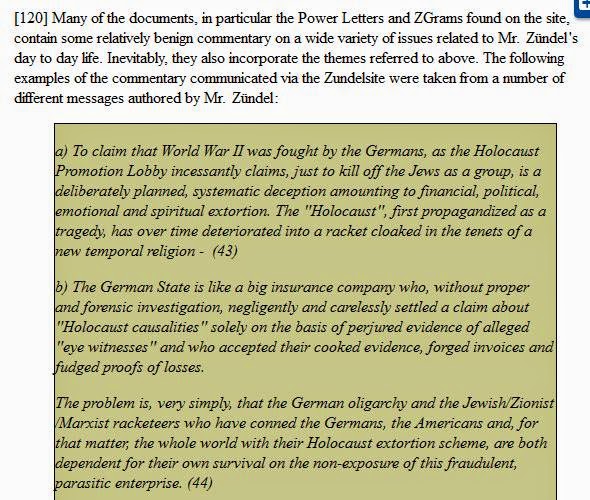 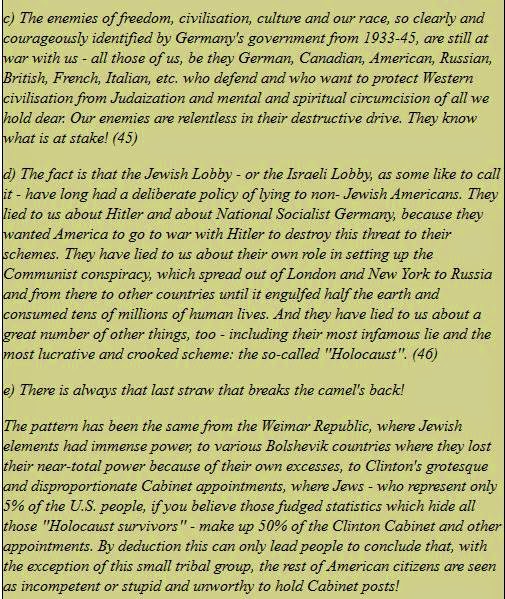 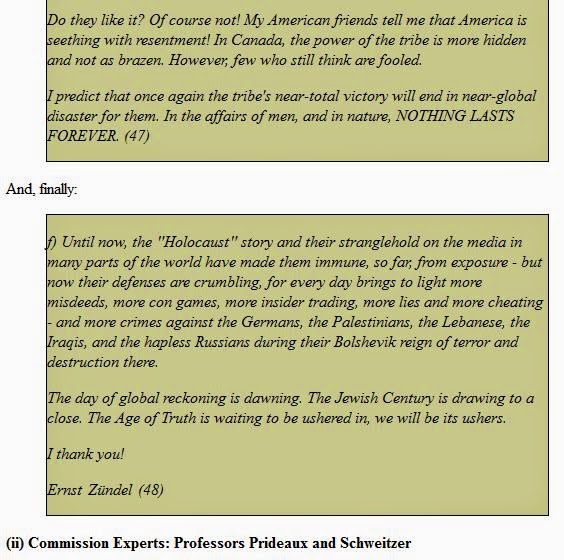 The online rhetoric was often beyond demeaning and could be viewed as an effort to incite violence against identifiable groups. In fact it could be argued that many of the Human Rights complaints made by Richard Warman should actually criminal charges under Sec. 319 of the Criminal Code, but because provincial attorney generals have been reticent about allowing such charged to be filed, Sec. 13 of the Human Rights Act was the only viable means of protecting vulnerable identifiable groups.

We leave our readers with the following thoughts.

Unrestrained hate propaganda directed at any definable group is demeaning and derogatory. No matter the targeted group, if hate propaganda is permitted we then develop a social culture where it is at first allowed and then "normal" to disparage and demean the group. We build a culture where demeaning is acceptable and then denial of services and rights follows for those unworthy members of the target group. Is is then a matter of time until some of the more radical in our society translate the acceptable derision into physical threats and attacks; the danger lies in creating a climate where derision of a group is acceptable which creates a climate for action against the group. Spreading hatred directed at identifiable groups threatens the safety and security of the group and group members. There is no excuse for demonizing and threatening fellow citizens.

Ultimately, the freedom of expression is not absolute. No citizen should have to suffer the victimization of hate propaganda directed at a group. Hate propaganda is insidious and, like small doses of arsenic, cumulative and eventually lethal.

Pretty well put, eh? We wish we could take credit for all that, but someone beat us to the punch nine years ago: 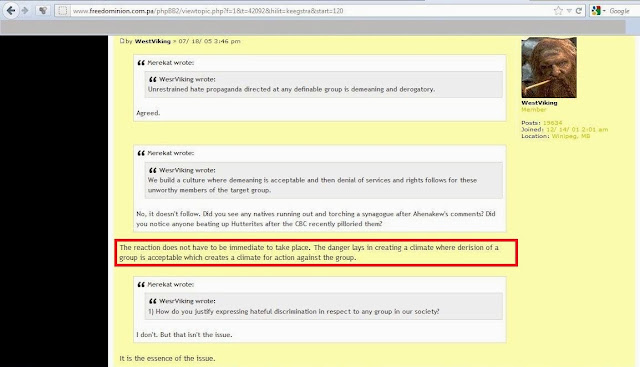 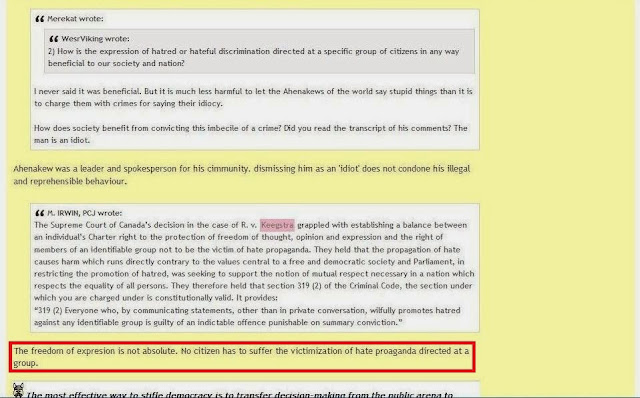 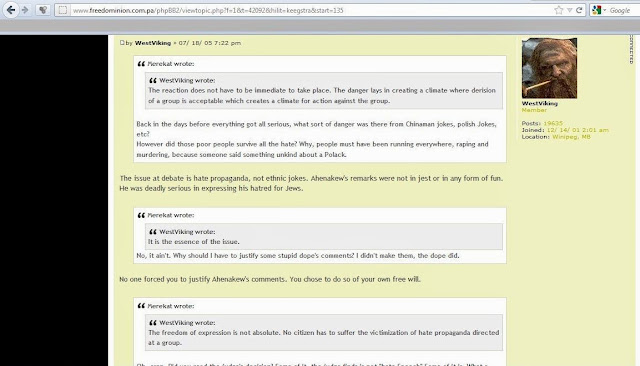 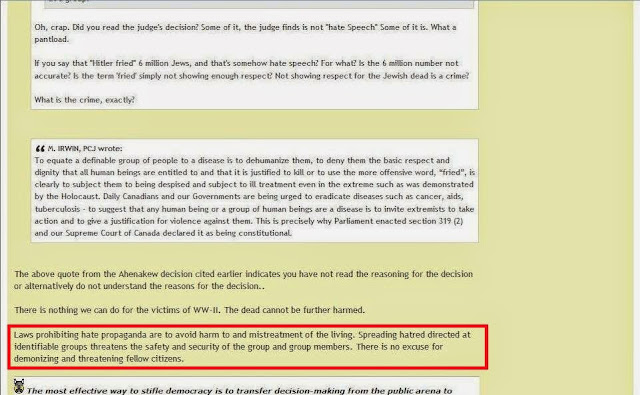