We had been looking up old websites using the handy tool that is the Wayback Machine last night when we decided to take a look back at one of the sites Kulbashian used to host, TorontoSkinHeads.com. Given that Robert Reitmeier's trial began today, we found this part (saved by someone who took over the site and wished to provide evidence to the violent motives of boneheads) to be especially salient (photos were added from our collection):

Lets now talk about the essence of a skinhead; tenacity and violence. How many of you reading this 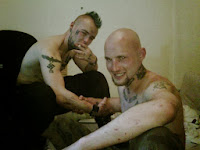 have been in a fight in the last five years? How many have ever been in a fight outside of high school. You need to ask yourself these questions, and ask yourself if you really have what it takes to call yourself a skinhead. As a skinhead, you should not take shit from anyone. I do not care if there are multiple people, you simply do not take shit from them. So what if you get your ass kicked? So what if you get killed? If you have the aggressive spirit I, and numerous others have, neither of the above will happen to you. How violent are you? How much do you believe in our cause? If some asshole at the grocery store makes a comment such as "Seek Help", do you immediately beat him to the ground? Do you have the animal inside you? Can you do anything it takes? 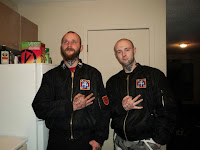 Remember, the reason niggers are so violent is that they still have the ability to tap into animal instinct, and somewhat lack the ability to turn it off. This is a product of natural selection, and results because niggers are so far behind whites, and every other race for that matter, in an evolutionary sense. Whites can turn on the inner animal, although it takes a bit of practice. It's essentially what the military does to all of its infantry and spec ops. They simply train the soldier until the beast can be turned on. This is the same reason that many of you have never met a "normal" marine, and why most of them act like murders. You, as a skinhead, must turn on the inner animal in order to do what other may deem as impossible, sickening, depraved, and insane.
...
Could you claw out an opponents eyes and scrape the pink muscle of the eye socket while optical fluid pours over your hands. Could you stand the "underwater popping sound" as the eye is torn from 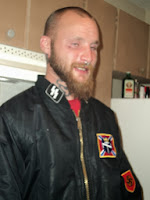 Could you bash, stab, kick an opponent until their head caves in, their brains varnishing the floor, as their eyes are displaced from their sockets?

Could you kill thousands of people with an explosive device?

Essentially, I am asking, have you ever seen a body? Can you stand to see the mutilation of the human body without going into shock? Can you inflict the above damage on another's body without going into shock, freezing, or being hindered because of psychological preconditioning? If the answer is no, you can not yet tap into the inner animal, nor will you survive long in what the future will surely bring. If the answer is yes, you will most likely never loose another fight, and you will indeed be an asset to our cause.

At least whoever wrote this was being honest when compared to other groups (Aryan Guard, Blood & Honour, Tri-City Skins, Heritage Front, etc) who publicly disavow violence but who amongst their fellow travelers both glorify and revel in it.

When the arrests originally took place, the media noted the racist graffiti as evidence of White Supremacist involvement of the crime. A lot of people suggested that such evidence was very weak and at best circumstantial, and we agreed. However we posited that there must be other evidence, such as video surveillance, that ultimately made the arrests possible. Based on the information below, it would appear that we weren't all that far off:

Family fears reason for deadly attack may never be known

The jury trial of a man accused in the beating death of Calgarian Mark Mariani may bring about a resolution to the case, but the victim’s sister isn’t sure her family will ever know why he was killed.

Robert David Reitmeier is accused of beating 47-year-old Mariani to death with another man, Tyler Sturrup, in a northwest Calgary alleyway in 2010.

Sturrup pleaded guilty to second-degree murder earlier this year, but went to prison without ever explaining why.

“We just still don’t know why. We want answers why Mark had to die that day,” Mariani’s sister, Kathrine Weltzin, said outside court.

As the Crown opened its case against Reitmeier, prosecutor Adam May said Mariani’s beating death may have been the result of a chance encounter with his killers behind a strip mall in the 1500 block of 16th Avenue N.W.

May told the nine-woman, three-man jury that Mariani suffered from health problems that required him to use a colostomy bag.

In emergencies, Mariani would have to empty the bag in public — and one of those occasions led him to duck into the alleyway after visiting one of the stores at the plaza at about 2:45 a.m. on Oct. 3, 2010.

It was there where Mariani encountered Reitmeier and Sturrup, who were painting graffiti, said May.

“Sadly for Mr. Mariani, going to that strip mall placed him in the wrong place at the wrong time,” he said.

“That cost Mr. Mariani his life.”

At the time of the crime, Reitmeier and Sturrup belonged to a white supremacist organization — though it’s not alleged there was any racial motivation to Mariani’s killing.

Reitmeier, 27, bears several visible tattoos with connections to the white supremacist movement, including a Nazi “SS” symbol on his face.

On Reitmeier’s neck, another symbol used by white supremacists — three joined sevens that resemble a Nazi swastika — was visible above the collar of the black sweater he wore in court.

In his opening statement, May told the jury the Crown will present surveillance footage showing Reitmeier and Sturrup buying alcohol at the same strip mall minutes before the killing, as well as incriminating wiretapped conversations between the two men about the crime.

The Crown’s evidence also includes a boot scuff mark found on a wall in the alley that is “chemically consistent” with combat boots worn by Reitmeier, added May.

After Reitmeier and Sturrup left Mariani to die in the alley, he managed to crawl back to his Ford Explorer, which was parked in front of the strip mall.

A passerby found his body beside the vehicle the next morning.

Julia Rose Sutherland first spotted Mariani’s prone body while cutting through the strip mall parking lot on her way to the LRT station at about 9 a.m.

“I wasn’t really sure if he was alive or not,” she said.
Sutherland said Mariani had a visible head wound and didn’t respond when she asked him if he was OK.

The jury was later shown a video taken by a Calgary police crime scene investigator, depicting Mariani lying on the ground beside his Ford Explorer. His head, face and hands were bloodied.

The crime scene video also showed evidence of an assault in the alley, with a pool of blood at the base of a wall and Mariani’s wallet lying on the ground nearby.

Sgt. Steven Dueck of the forensic crime scenes unit testified investigators also climbed onto the roof of the strip mall, where they found and seized a can of spray-paint.

In his opening statement, May told court that spray-paint found at the scene was consistent with a sample taken from Reitmeier’s jacket.

Did stirrup implicate reitmeier in his trial?

Those punks deserve their fate! And so do those, who knew about this crime months before it came to light- since that WEB duo bragged about it.